Trolled On Ground And In Air: Freshdesk, Zoho Take On Salesforce At Its Own Dreamforce Conference

Trolled On Ground And In Air: Freshdesk, Zoho Take On Salesforce At Its Own Dreamforce Conference “He will win who knows when to fight and when not to fight.”- Sun Tzu

Dreamforce by Salesforce is the biggest CRM event that happens every year in San Francisco. With over 180K attendees, Dreamforce has become a destination of enormous magnitude inviting hundreds of tech enthusiasts and users of Salesforce’s products and services.

But this year (October 4-7) Dreamforce began a battleground for who would hijack the attention from Salesforce!

So while Freshsales– a CRM for high-velocity sales teams by Freshdesk, launched a satirical campaign called ‘Sorry we didn’t launch earlier’, taking on one of its biggest rivals on ground, Zoho decided to dominate the skies above the Dreamforce conference with skywriting advertising by Zoho! 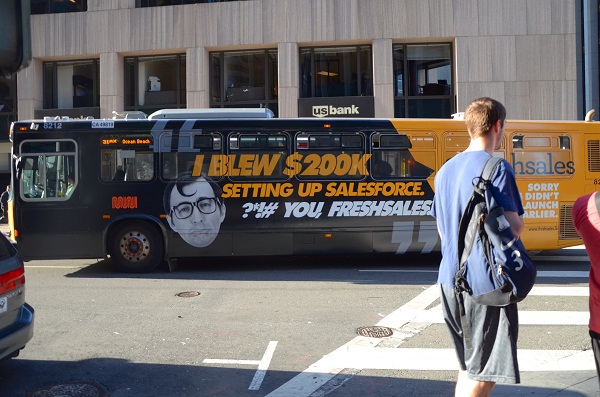 Freshsale’s satirical campaign is an apology from Freshsales to all CRM users scorned by Salesforce. The ad talks about how users wasted money, time, and resources trying to get Salesforce to work for them. Freshsales goes on to apologise for not launching earlier and saving these users from the trap that Salesforce is.

In a video, founder Girish Mathrubootham also spoke about how Freshdesk realised the need of a CRM like Freshsales designed especially for sales representatives working in high-velocity environments and fast-growing companies, which offers a one-in-all solution and negates the need for multiple tools.

Frustrated with Salesforce and the lack of flexibility it provided, Freshdesk went on to build a better CRM for small and medium businesses. Freshsales gives sales teams everything one would expect in a CRM, thus trying to overcome the complaints which people have with Salesforce- cumbersome, not intuitive, difficult to customise, expensive leading to even being a dumping ground for data.

The campaign which ran on buses around the city cheekily highlighted the same facets, based on feedback from Salesforce customers and also Freshdesk’s own past experience with the product. 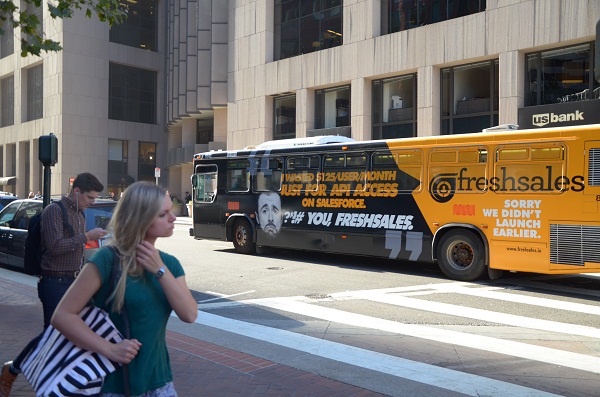 While Freshdesk tried to ambush Salesforce on ground, another formidable Indian origin CRM player Zoho, not to be left behind in taking a shot at the goliath of the CRM, took to the skies! Conference attendees were amused to see an airplane in downtown San Francisco writing out the phrases “#Outsmart Einstein. Zoho CRM” and “zoho.com/outsmart” in the sky. 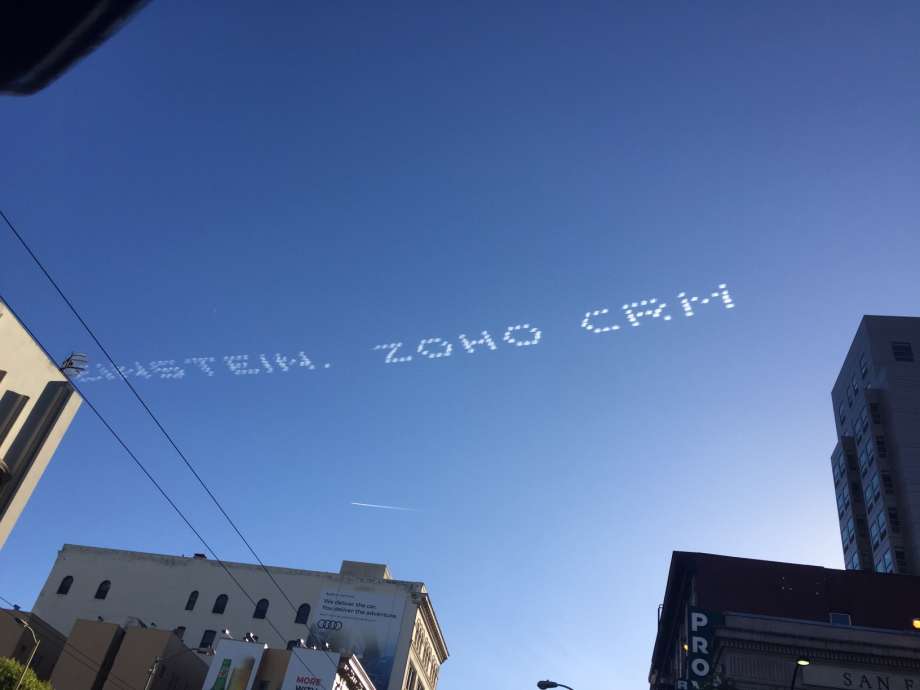 The guerrilla ad campaign caught the attention of many attendees posting photos and video of the skywriting, using the hashtag #OutsmartEinstein or tagging Zoho’s Twitter handle.

Sky advertising. Right on time for #dreamforce in San Francisco. How cool is this move by #zoho! #outsmartEinstein pic.twitter.com/gJmKOMAVAc

Reach for the skies with @zoho at #Dreamforce #outsmart #loveit #zoho pic.twitter.com/5em9S1sOjV

Zoho had pulled a similar stunt like this last year with its cryptic BART advertisements reading, “Dear Salesforce, Sorry for your losses” in 2015. 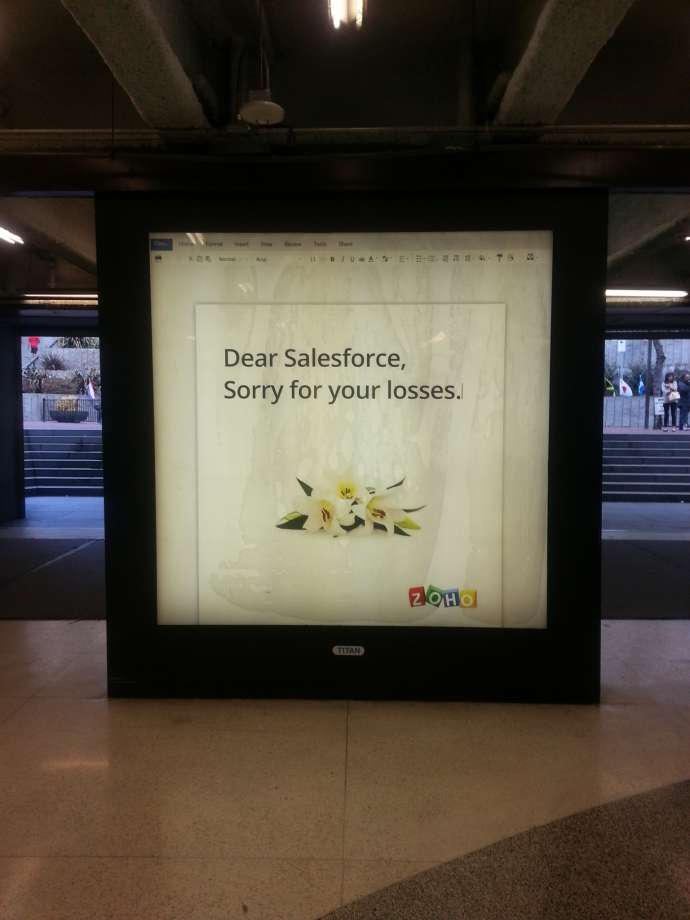 And it looks like they decided to up the ante this time, with the skywriting campaign. Now whether both the audacious campaigns were convincing enough to draw customers away from Salesforce is another story, but it can’t be denied that they were both successful in catching the attention of many an attendee in San Francisco.

As someone aptly tweeted-