Teachmore is a course-selling platform which enables teachers to build and sell educational products like online courses, live classes, quizzes and more. It helps teachers create an Android e-learning app without coding 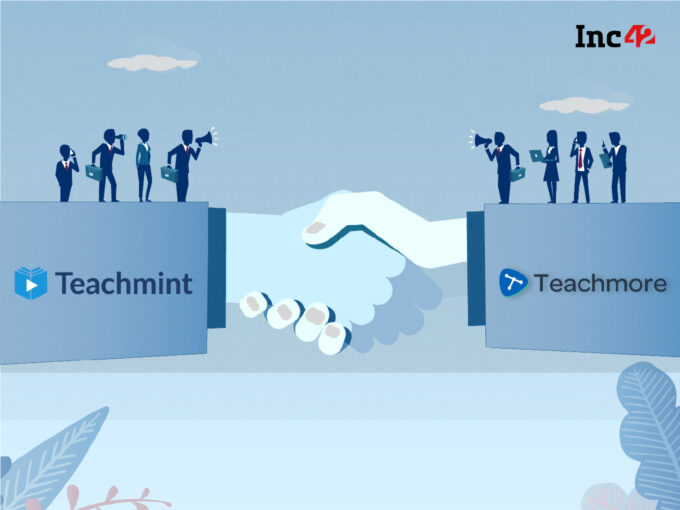 Teachmint has officially announced the acquisition today. According to Teachmint’s press statement, the edtech startup has acquired Teachmore in a cash and stock deal. Post the acquisition, Teachmore will continue to operate independently. Teachmint said that the acquisition will allow it to expand its course-selling offering to help its community of teachers grow their business.

Bengaluru-based edtech startup Teachmint is all set to mark its first acquisition. The edtech startup that helps teachers digitise their classrooms is in talks to acquire Vadodara-based Teachmore.

People aware of the deal requesting anonymity informed Inc42 that both Teachmint and Teachmore are in the final stages of the deal and it will be closed soon.

Teachmore is a course-selling platform which enables teachers to build and sell educational products like online courses, live classes, quizzes and more. It helps teachers create an Android e-learning app without coding.

Founded by Deep Shah and Harsh Bhakta in 2017, Teachmore also allows its customers to accept payments for selling courses from over 130 international currencies through Stripe Connect credit card processing or Paypal. The three-year-old startup claims it doesn’t charge any transaction fees.

The development comes almost two months after Teachmint bagged $78 Mn in a Series B funding round led by new investors Rocketship.vc and Vulcan Capital. During its Series B round, the startup also added Goodwater Capital and Epiq Capital to its captable.

Its existing investors Lightspeed India Partners, Learn Capital, CM Ventures and Vaibhav Domkundwar-led Better Capital also participated in the round. The funding helped the edtech startup’s valuation soar to half a billion dollars. To date, Teachmint has raised over $118 Mn.

Teachmint said that it would use funds to strengthen its proprietary classroom technology and to expand into international markets. The acquisition of Teachmore seems to be in line with Teachmint’s plans to expand into global markets.

In July, Teachmint had bagged $20 Mn in a Pre-Series B funding round led by Learn Capital and CM Ventures.

The edtech space in the country has seen an increase in customers in the backdrop of schools and other educational institutions being shut down because of the ongoing pandemic. Since the onset of the pandemic, four edtech startups have entered the unicorn club. Last September, Unacademy was the second edtech startup to cross the billion-dollar valuation, followed by Eruditas, upGrad, and Vedantu.

In terms of acquisitions, BYJU’s, the country’s most valued edtech startup has made 10 acquisitions in this year alone, the latest being Austria’s GeoGebra. Gaurav Munjal-led Unacademy has also made several acquisitions this year, with Sifilearn being the latest. While Ronnie Screwala’s upGrad acquired Talentedge and Global Study partners in recent months.