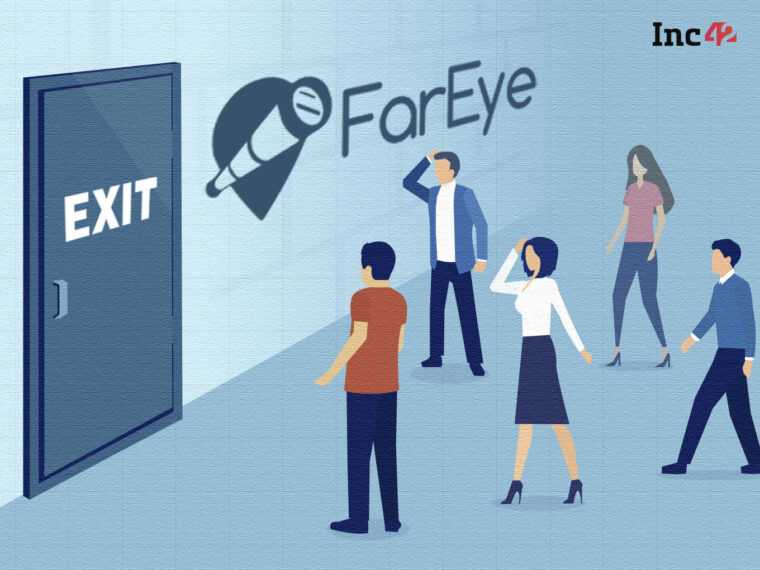 As per sources, the startup has laid off employees from across its global teams

According to Inc42 Layoffs Tracker, Indian startups (including FarEye) have laid off around 9,518 employees in 2022

New Delhi-based SaaS logistics startup FarEye has laid off around 250 employees this week. The layoffs have impacted employees at its India, North America, and Europe offices.

According to Inc42 sources, the startup has laid off employees from product & engineering, professional services, talent acquisition, quality analysts, sales, developers among others.

The company had an employee strength of over 750, according to its website.

The managers had informed the affected employees that the layoffs were not based on their performance but due to organisational restructuring.

Soon after the one-on-one meeting with the manager and exit process, employees were asked to leave the office premises. According to Inc42 sources, FarEye has committed to pay two months’ salaries (based on their notice periods) to the impacted employees.

Founder and CEO Kushal Nahata confirmed the layoffs with Inc42 without revealing the number of employees impacted.

“With the softness in market conditions, in the year ahead, we are focusing our efforts and aligning resources in areas that drive maximum value for our customers while addressing their key challenges around operational efficiencies, cost optimisation, and delivery experience. Keeping this as the priority, we are strengthening our core competencies, deepening our focus on product differentiation, and automation, and optimizing the effort required to manage operations.”

On the layoffs he further added, “This strategic realignment has resulted in the need to restructure a part of our team. For a company like FarEye that has always kept its people at the core, and believes that our people are our strongest asset, it has been a difficult period. We had to make some hard decisions to reduce our team across operations and services.”

He further claimed that the company will be taking care of the “rightful benefits and entitlements”.

The layoffs have come almost a year after the startup had raised $100 Mn in its Series E funding round led by TCV and Dragoneer Investment Group at a $350 Mn – $400 Mn valuation. Its existing investors — Eight Roads Ventures, Fundamentum and Honeywell also participated in this round. The startup also counts Microsoft as its investor.

While announcing its Series E round, the startup had said that it would be utilising the funds to expand its team and operations in the US. To date, it has raised $150 Mn in total funding. According to reports published in December last year, FarEye was chasing unicorn valuation.

In January 2022, FarEye had also announced an ESOP buyback programme worth $1.2 Mn. This was the logistics startup’s second and largest ESOP buyback.

Some employees also blame the extensive hiring carried out by the startup after its Series E fundraise, as one of the reasons for layoffs. The startup was unable to scale sales, thus further widening its losses.

RoboticWares Private Limited, which runs FarEye, incurred a total loss of INR 62 Cr in FY21 on a standalone basis. The startup generated INR 80.1 Cr in revenues while spending INR 142.2 Cr during the same period. However, it’s unclear whether the company has entities in other countries.

According to its website, the startup claims to have over 150 customers in 30 countries. It further claims to be doing around 5 Mn transactions per day. Some of its clients include Hilti, Domino’s Pizza, Gordon, Central Group, Zalora, among others.

With this, FarEye has become the 23rd Indian startup to go through layoff in 2022. According to Inc42’s Indian startup layoff tracker, in 2022, 9,518 startup employees have been impacted (including FarEye). Startups and unicorns such as Unacademy, Meesho, Vedantu, have reported layoffs in the recent weeks.

Layoffs by FarEye have also come as a shocker, especially because the logistics sector was one of the booming sectors during the pandemic. Since the beginning of 2020, Indian startups in the logistics sector have secured over $2.1 Bn in funding. This is almost double the funding ($2.3 Bn) secured by the industry between 2014 and 2019.

In the last one year alone, several logistics startups have reported about their IPO plans. Delhi NCR based Delhivery got listed last month and currently stands at a market capitalisation of INR 37,547 Cr. Another logistics startup Ecom Express has filed DRHP for raising INR 4,860 Cr Via IPO.