ESOPs Gaining Traction Among Indian Startups, But Lack Of Awareness A Hurdle In Widespread Adoption

While the penetration of ESOPs in the Indian startup ecosystem is higher than in the Southeast Asian region, unfunded companies lack clarity about ESOPs

Indian startup employees made over $335 Mn through ESOPs in 2021

The year 2021 saw many Indian startups resorting to innovative ways like offering expensive freebies and other employee benefit programmes to retain talent. From getting multiple offers to multifold hikes in salaries, it was a great year for startup employees. Amid all these, the classic employee stock option plan (ESOP), which ensures that employees also have skin in the game and are invested in the success of a startup, also came back in fashion.

Indian startup employees ended up making over $335 Mn through ESOP in 2021.

The numbers indicate that cash-based compensation was no longer the bare minimum to attract and retain talent in the fast-growing startup ecosystem. The startups didn’t only offer ESOPs to full-time employees on their payrolls but also came out with new variants of ESOPs, like TSOPs (Unacademy launched ESOPs for teachers on its platform), PSOPs (Urban Company launched a partner stock option plan for its gig workforce) and MSOPs (BharatPe offered $100 Mn worth of shares to merchants).

Amid the frantic growth of startups ($42 Bn+ raised in funding in 2021, India crossed the 100-unicorns mark in 2022), employers are sketching out different strategies to hire and retain talent, with a lot of focus on ESOPs.

2022 is no different. The year has already seen Indian startup employees making $159 Mn in ESOP buybacks.

According to a report by Siason Capital, titled ‘The State Of ESOPs In India – 2021’, which surveyed 268 startups from India, two out of every five startups still don’t use ESOPs.

While the penetration of ESOPs in the Indian startup ecosystem is higher than in the Southeast Asian region, the report observed that unfunded companies lack the clarity of ESOPs. Of the startups that were without ESOP schemes, 54% did not receive any external funding, while only 2% of the startups were in growth and late stage, the report said. 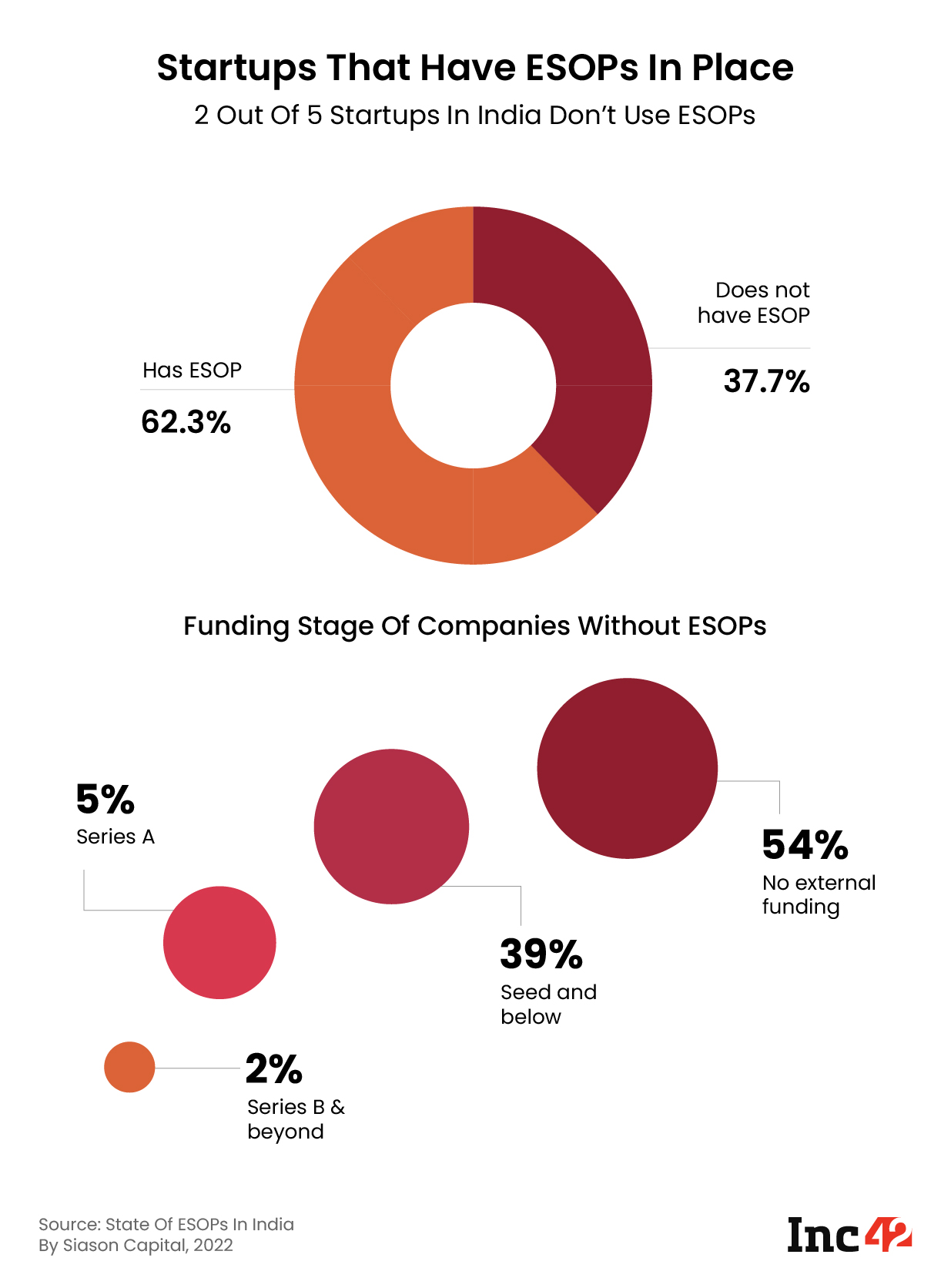 Besides allowing employees to get a share in a company’s success, along with founders and investors, ESOPs also improve pay packages, ensuring a higher employee retention rate.

Amid the employee churn last year, startups not only offered generous pay hikes but also lavished other perks on employees. While Meesho offered a 10-day break as part of its talent retention plan so that its employees could unplug and rejuvenate, BharatPe offered BMW bikes, gadgets and cricket holidays in Dubai. Unacademy expanded its ESOP pool to 238 Mn from 99K options, taking the total ESOP valuation to over $500 Mn.

Of the Indian startups with ESOP programmes, 39% offered ESOP to candidates while interviewing them for jobs. A little over 53% of the startups offered ESOPs before the candidates accepted job offers, showing that the startups started offering ESOPs as a part of CTC (cost to company) to hire new talent. 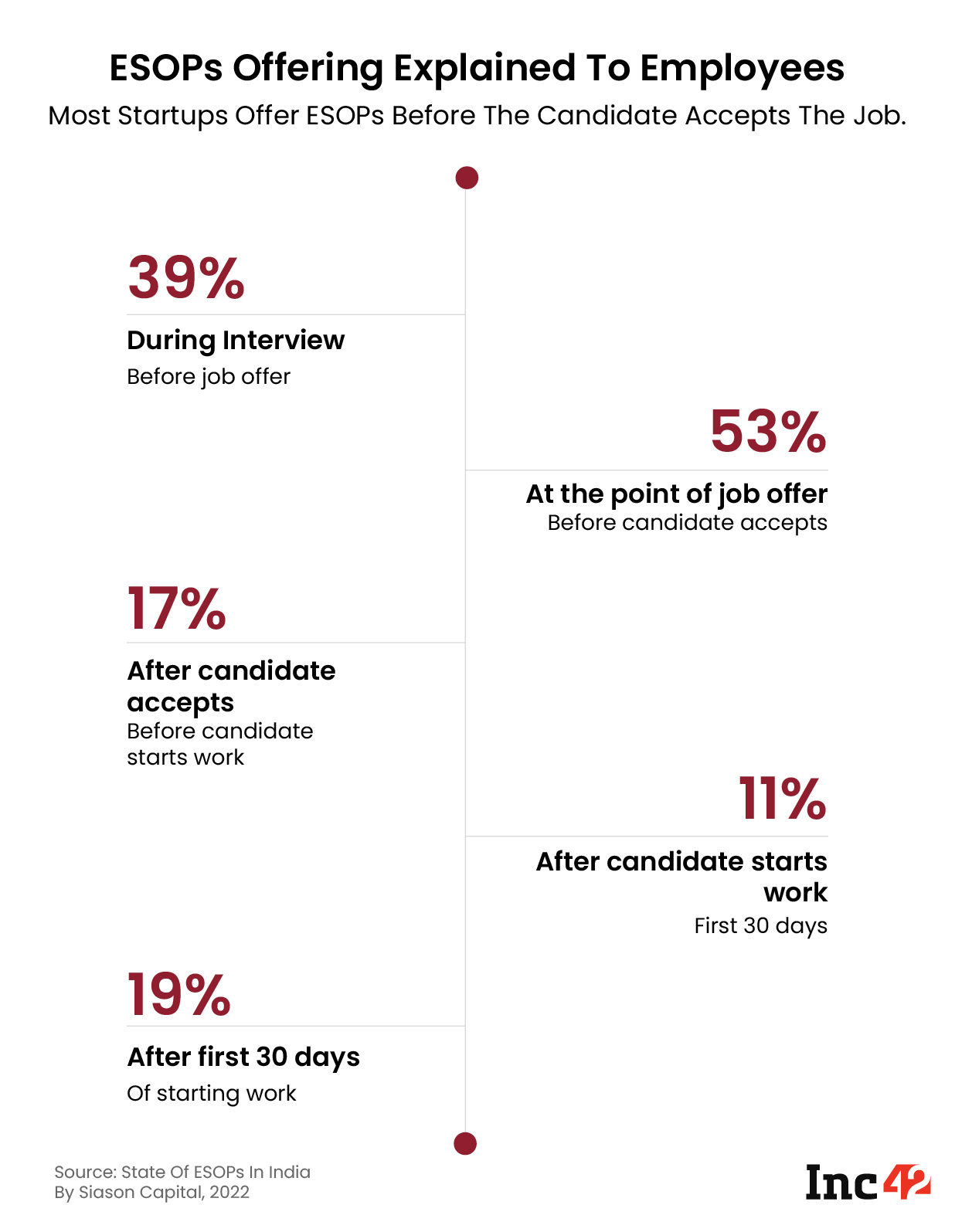 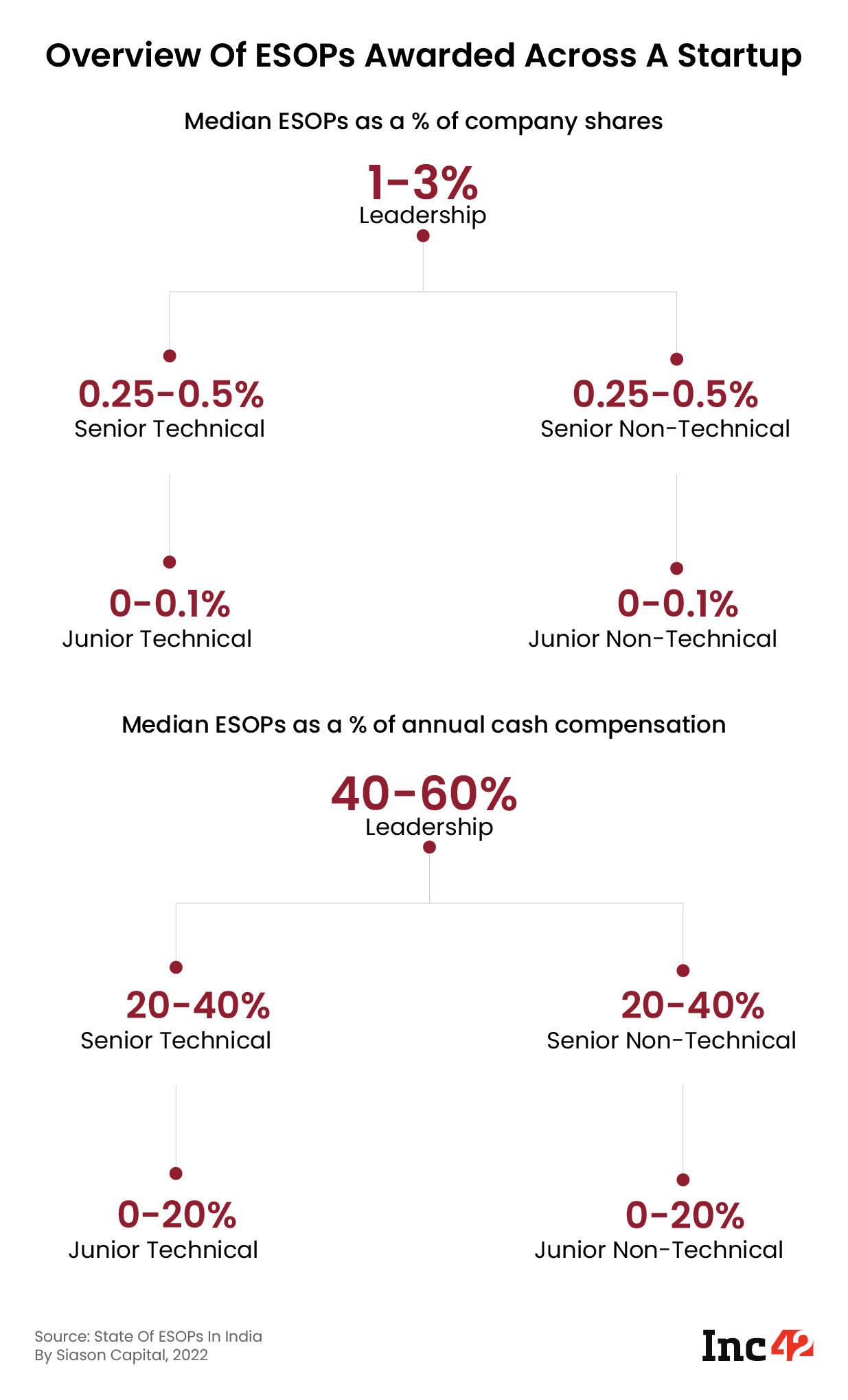 ESOPs formed about 20%-40% of the pay packages of senior leaders, while junior employees received under 20% of their CTC in ESOPs.

Despite the recent increase in startups offering ESOPs, lack of knowledge about ESOPs is the biggest roadblock in its wide scale adoption. According to Siason Capital, 238 surveyed companies didn’t know about ESOPs and what they entail. 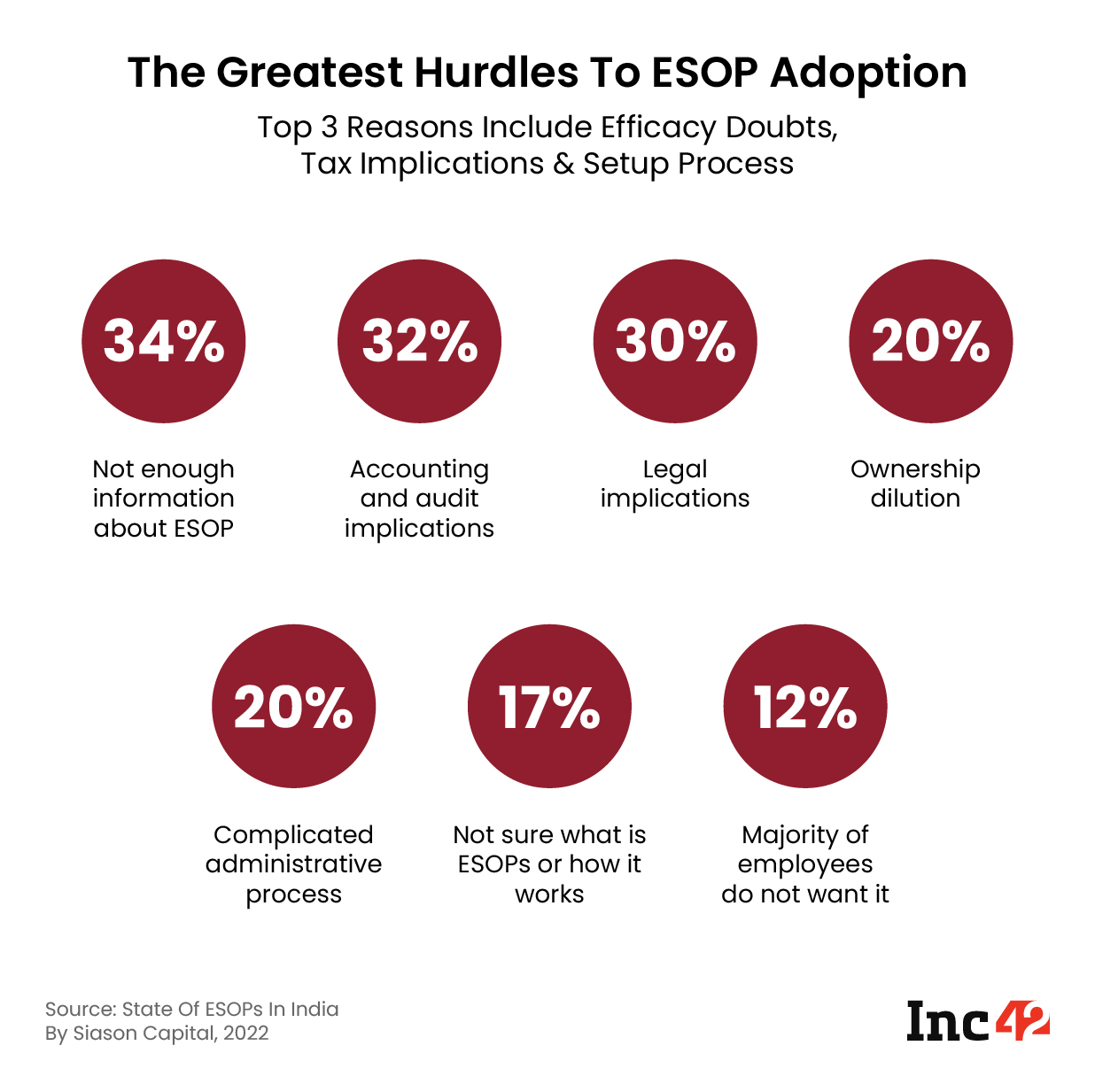 Besides, the accounting and audit implications of ESOPs are another hurdle. The value of ESOPs changes with the valuation of a startup, and 32% of the surveyed Indian startups perceived it as a hindrance. 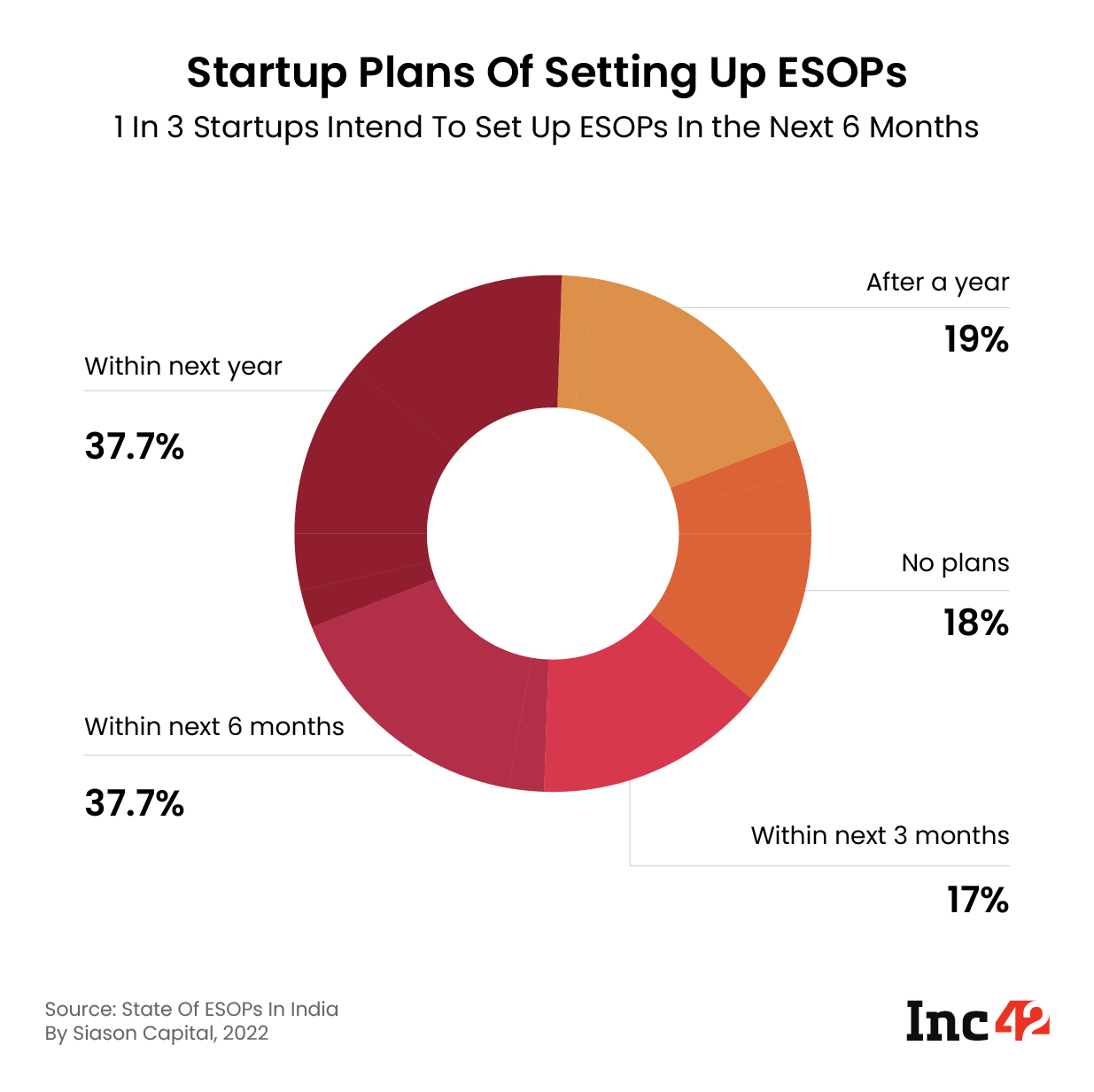 Despite the lack of awareness, a lot of startups which currently don’t offer ESOPs have plans to introduce them. The report said that one in three surveyed startups plan to start offering ESOPs in the next 6 months to their employees. Meanwhile, 18% of the startups said they had no plan to offer ESOPs.