Important Developments From The World Of Electric Vehicles [20-26 July, 2018] 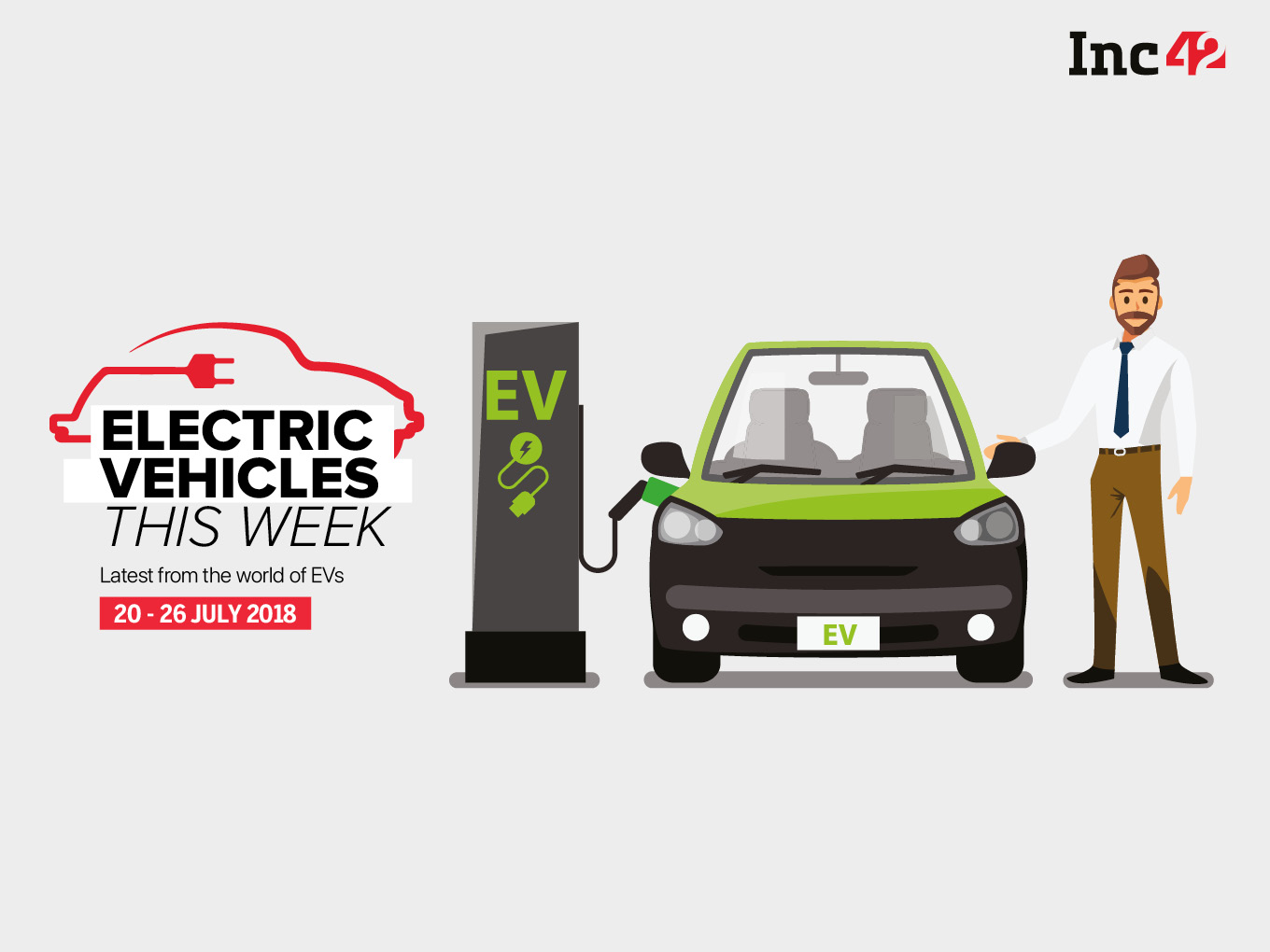 The ministry of petroleum and natural gas (MoPNG) on July 23 asked the Supreme Court to ban the sale and manufacturing of Bharat Stage-VI non-compliant vehicles in India, starting April 1, 2020. The ban, if implemented, is also expected to boost the Centre’s efforts to ensure faster adoption of electric vehicles in the country.

In an affidavit filed in the Supreme Court, the ministry said that the ban should be implemented as the continued sale of BS-VI non-compliant vehicles “will lessen the environmental benefits to be accrued from using cleaner BS-VI fuel.” The Centre has invested $4Bn (INR 28,000 Cr) to promote the use of cleaner BS-VI fuel.

The Bharat Stage VI norms are essentially emission control standards meant to keep a check on air pollution. Based on the European regulations (Euro norms), these standards set specifications/limits for the release of air pollutants from equipment using internal combustion engines, including vehicles. While BS IV-compliant fuel currently in use has 50 parts per million (ppm) sulphur, BS VI stipulates a low 10 ppm. India plans to jump from the BS IV to BS VI by 2020.

The bench hearing the case ordered that the ministry’s affidavit be supplied to the Society of Indian Automobile Manufacturers (SIAM) so the latter can respond to it. The bench said, “When this issue (shifting from BS-IV to BS-VI) had cropped up, there was strong opposition from you.”

The bench was told that Mercedes-Benz was already manufacturing BS-VI compliant vehicles in India. Benz recently announced that up to 40% of its entire product lineup would be fully electric or powered by some form of hybrid powertrain by 2025. Indian automakers such as Tata and Maruti & Mahindra are also said to be exporting BS-VI vehicles.

Last week, the World Health Organization (WHO) published a report which said that India’s road transportation alone contributed to 87% of the total 188 MT of CO2 emitted in the country till 2010. It noted that electric vehicles are at least 3 to 3.5 times more energy efficient than traditional internal combustion engine (ICE) vehicles.

Let’s take a look at EV developments in our 33rd edition of Electric Vehicles This Week.

The Centre on July 23 reduced the goods and service tax (GST) on lithium-ion batteries from 28% to 18%. Welcoming the move, the Society of Manufacturers of Electric Vehicles (SMEV) said, however, that the tax was still high compared to factory-fitted batteries in electric vehicles and would prove to be a hurdle in increasing EV adoption in India.

“We are fine, something has been done by the government to reduce GST on lithium-ion batteries when sold separately. However, some irritants remain as the new rate is still higher than a factory-fitted battery in an EV,” SMEV director general Sohinder Gill said.

FAME II To Give A Boost To Ev Industry: Babul Supriyo

Switching over from conventional ICE-based vehicles to new technologies such as electric, hybrid, and fuel cells is essential, the minister of state for heavy industries and public enterprises, Babul Supriyo, said.

In reply to written questions in the Lok Sabha, Supriyo said that the second phase of FAME envisages to provide a boost to the EV industry with several interventions on the demand and supply side, including R&D efforts.

Raasi Green Earth Energy (RGEE), a solar power business of the Bengaluru-based Raasi Group, has announced it will use lithium-ion cells developed by scientists at the Council of Scientific & Industrial Research (CSIR) for solar energy storage and to power electric vehicles.

According to Raasi Group’s chairman C Narasimhan, the company is planning to set up a 1GW solar energy plant, a cell manufacturing plant, and a lithium-ion battery recycling plant near Hosur in Tamil Nadu. The lithium-ion cells have been developed by scientists at CSIR’s Central Electrochemical Research Institute in Karaikudi.

Hyundai To Launch Electric SUV In Select Cities In India

South Korean automaker Hyundai is set to launch its electric SUV in India in the second half of 2019. The Hyundai Kona compact SUV, which made its debut at the Auto Expo 2018, will be launched in India, but it won’t be available at all Hyundai dealerships across the country. Instead, sales of this SUV will be restricted to just 15 cities, including metros such as Delhi and Mumbai.

The automaker has also signed an MoU with the Automotive Skills Development Council (ASDC) to impart training to the youth; those selected will get an opportunity to work at Hyundai’s service channels.

Limited driving ranges and a patchy charging network have resulted in a dip in the sales growth of electric and plug-in hybrid cars across major markets in the European Union in the first half of 2018. According to consulting firm EY, registration of electric cars increased by just 33% in the six months till June this year, as compared to a 54% rise in the same period in 2017.

EY partner Peter Fuss said, “Charging infrastructure remains inadequate and the models currently available mostly don’t offer a good-enough range. The situation will only change in the medium term. Starting in the luxury segment, electric powertrains will establish themselves as serious alternatives.”

Canadian automaker Volkswagen has announced ‘Electrify Canada’ to set up 32 DC fast-charging stations in select cities and along highways in the country. Each station is said to have several fast chargers with an average of four chargers per site.

Volkswagen group president and CEO Daniel Weissland said, “We are thrilled to be able to offer this service and to take a leadership position in providing this key EV adoption enabler to the Canadian market.”

Audi To Produce Electric Engines For E-Tron At Hungarian Plant

Audi, which also makes cars in Hungary, manufactured a total of more than 1.965 Mn engines at its Hungarian plant in the city of Gyor last year and is one of Hungary’s most important exporters.

China’s electric vehicles industry is poised for tremendous growth. The government is planning a “brutal reshuffle” in the EV battery sector by bringing in subsidy reforms to meet the more exacting technological demands of next-generation transport, according to Sanford C Bernstein & Co.

Mark Newman, Bernstein’s lead global analyst for batteries, energy storage, and electric vehicles, said. “This has been a heavily subsidised market in which the (China) government has thrown money at everything and everybody that wants to give it a try.”

The China government aims to promote the development of longer-range EVs, requiring larger batteries with a higher energy density, which are much more complex to develop and mass produce. It has built massive new battery capacity in recent years

“Now they’re trying to wean them off, and you’re starting to see who is a worthy battery maker that can actually survive,” added Newman.

South Korea-based LG Chem plans to invest about $1.77 Bn to build its second electric car battery plant in China to meet the growing demand in the country. According to the company spokesperson, the investment will be made by 2023 to increase its total output capacity to 32 GW hours per year, or batteries for around 500,000 electric vehicles. LG expects to begin production in October 2019.

[Stay tuned for next edition of Electric Vehicles This Week]
facebooktwitterwhatsapp