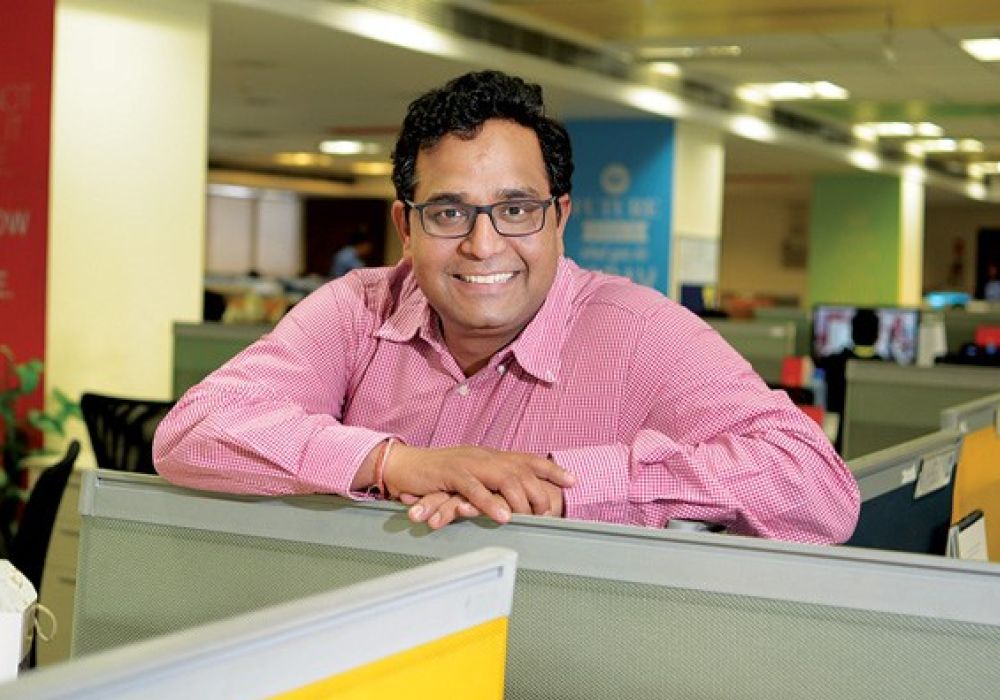 Just two hours after PM Modi announced the demonetisation of INR 500 and INR 1000 notes, a peculiar thing happened at Paytm.

“At 10 o’clock, we saw some numbers which went through the roof. Our Google analytics had crashed and we were not able to track real time numbers. In the morning when we checked, the new user numbers were at 2X than what we saw yesterday,” reveals Deepak Abbot, who has recently joined as the Senior Vice President-Growth Marketing.

But it didn’t stop here. In less than 24 hours, Paytm’s platform saw an overwhelming 435% increase in overall traffic – as millions of consumers across India moved to use their Paytm wallets to transact offline.

Speaking to Inc42, Deepak reveals, “More than the new users, it was the existing users who are topping their wallets because they already know about Paytm. So while traffic roughly increased 4.5X, the interesting part was that people were adding a lot more cash than they usually used to. So we saw a 10X or 1000% increase in ‘add to cash’ transactions.”

Deepak believes these numbers will continue to grow as people are actually doing multiple ‘add to cash’ transactions. They are using the cash in the wallet and then adding more. Obviously, the average ticket size might have come down but with a 10X jump in transactions, who’s to complain!

Our Retail Network Has Become Our Brand Ambassador 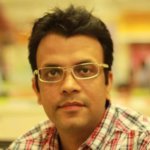 Explains Deepak, “Our retailers are educating users, requesting them to use Paytm instead of cash as it is easier for them, as well. They have technically now become our brand ambassadors. In fact, we used to chase retailers, now it is the other way around. Now many retailers are chasing us to have a QR code.” It was in October 2015 that Paytm had introduced Quick Response (QR) code-based payments which could be used by any shopkeeper or service provider to start accepting digital payments.

It is no wonder then, that Paytm has already pressed its forces into action to make the most of this upturn. The mobile payment platform announced the launch of an ambitious plan to touch about 5 Mn merchants in a few months from now.

Deepak says, “So for the next four to five days we will put a lot of force on the field in the top 40 cities – for onboarding merchants. That will result in quite a jump – probably about half a million in the coming days. It is a big number but we are hoping that will happen. Eventually, we would be expanding beyond those cities too.”

With that in mind, Paytm is looking to hire over 10,000 Paytm agents as it seeks to aggressively expand its offline merchant network to over 20 Lakh touch-points by the end of the current fiscal year.

What will also help the cause is the fact that it is a DIY platform. A shopkeeper or retailer can easily create his own QR code and go live in just a few hours. Instead of Paytm chasing them, it will be they who will be chasing Paytm.

Deepak believes that with this expansion to more and more cities, will lead to the generation of many more unique use cases. An example of which could be how people are already using Paytm in mandirs or places of worship for donations, things that they had never foreseen. Consequently,  the platform which has 150 Mn users, has set an internal target of adding another 10 Mn users next month. With a 2X growth in a single day, the target might not seem a farfetched one.

Besides focussing on signing merchants, Paytm has also been paying equal attention to educating consumers through videos and multilingual blogs. They also plan to reach out to the lower-income strata consumer base, which would include likes of drivers and maids. Efforts are on to actually have experts specifically conduct sessions for these audiences by creating centres in major cities to hold such activities. Deepak adds that though the application might be a slow and tedious process, Paytm would make every effort to cater to all strata of society.

While the government’s demonetisation bombshell is helping pave a smoother path for large scale wallet adoption, Deepak concurs that education has been a major challenge in their journey.

He explains, “A lot of people were not aware of what uses an online wallet has. I think traditionally they have been mostly used for recharges and cab bookings. But we have added numerous previously unheard of use cases – from paying your parking ticket to your paan waala. That’s what we have been slowly doing but we will accelerate on that front too, as people start getting more comfortable with the idea of digital wallets. The need for our product is now on both sides.”

The second challenge, which is an opportunity rather, he adds, is the overall macro environment. So while smartphone usage is increasing and Internet penetration is growing, Paytm’s escalations are much higher. Almost every month, the platform is adding 3 Mn users, so it is hitting the ceiling. But he expects that to change rapidly, especially with Jio coming in, and data connectivity going up.

The demonetisation has yet another added advantage – it makes it much easier for Paytm to now sign up users for its upcoming payments bank. Explains Deepak, “There are so many people who don’t have bank accounts and now they will realise the importance of one. With payment banks coming in, it will be a big boost to banking as a lot of people will start using banking instruments. Now with this initiative, I think the drive to open accounts will be much easier because now people will seek information as to how to participate in this digital payment thing. So adoption would be much quicker than what we had planned.”

Consequently, Paytm plans to increase its targets to sign up more users.

And that brings us to the million dollar question – with all these efforts, will India go cashless?

Deepak says that while India would continue to be a country where cash is used extensively but that percentage would come down. He says, “India might be a 95% cash economy today, but we see that percentage is falling. We won’t see the majority using digital payments, at least in the next one year but the adoption rate will be much faster. With this step from the government, we may be able to see in a few months, the numbers which we had planned for a year down the line.” 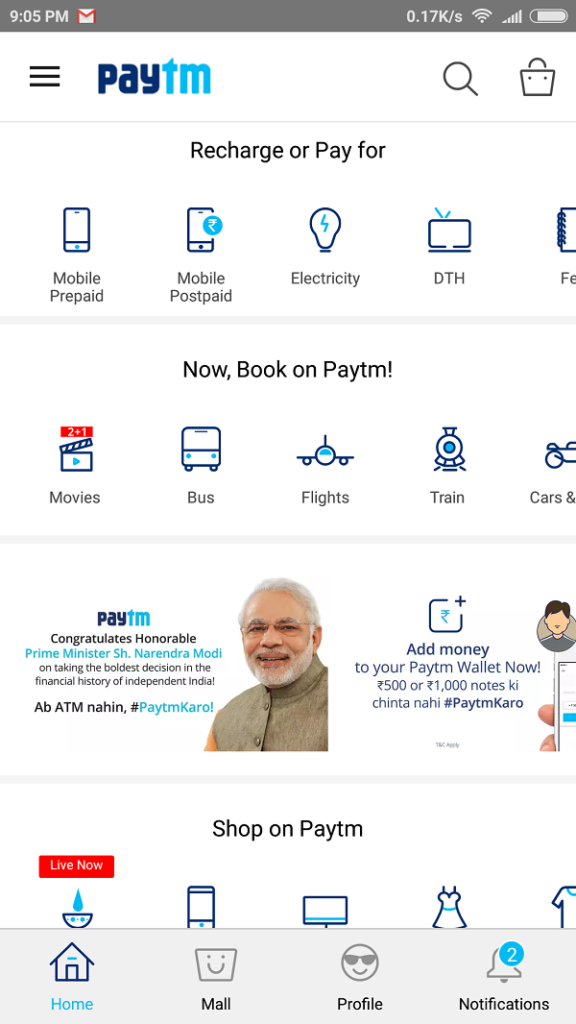 And Paytm is all prepared for that. When questioned about the capacity of its infrastructure to handle such an upsurge in the volume of transaction, Deepak proudly adds, “Our infrastructure is quite robust and we are equipped to handle the increased traffic and scale. It will be a good problem to have if it breaks!”

Hardly a coincidence that the message on the app, within 24 hours, has been updated and cheekily says, “Ab ATM nahin, #Paytm Karo!”

But other wallet players were not left behind either. As per a Mint report, PayU India has registered an 80% jump in transactions on Wednesday, as of 12:30 pm, compared to Tuesday, according to CEO Amrish Rau, with transaction rising from the average daily volume of 12 Lakhs to 25 Lakhs. Similarly, Freecharge claimed that the average wallet balance on its platform increased 12 times since the announcement. Online marketplace Snapdeal also announced the launch of its new and first-of-a-kind feature, Wallet on Delivery (WoD), which will allow users to pay on delivery by using their Freecharge wallet.

MobiKwik meanwhile reported an over 40% increase in app downloads within less than 18 hours of the announcement. User traffic and merchant queries went up by 200% among its over 35 Mn users. The wallet company has also revised its business targets and targets to achieve a GMV of 10 Bn by 2017. Oxigen Wallet reported an increase in the load money transactions by up to 40%-45%during the first half of Wednesday.

Ola Money, part of taxi aggregator Ola, also benefitted from the drive with over 1,500% increase in recharges across 102 cities of its operation in past 15 hours. Similarly, Bengaluru-based mPoS solution provider Ezetap, which makes its own point-of-sale devices to enable merchants to receive digital payments, saw a 25% spike in transactions.

However, Paytm being the largest player in the segment with 150 Mn users stands to gain the maximum. Also, because it offers one of the most seamless online-to-offline (O2O) payment solutions for maximum number of basic services, with steady increase in use cases.

The demonetisation drive might have caught those not hooked onto the digital payments and a large section of the unbanked population by surprise. As ATMs are likely to be shut today as well, the numbers for these digital wallet firms will surge further. People mostly are panicked and chaos reigns, as they make a beeline for depositing/exchanging notes today at the banks.

But e-wallets are celebrating this chaos to add a significant chunk of those previously unused to digital payments, to their user base. For them, the party seems to have just started. And it doesn’t look like it’s going to end anytime soon.