Bangalore-based DailyNinja, a hyperlocal mobile solution for all subscription based daily needs, has raised an undisclosed amount of seed funding in a round led by Aprameya Radhakrishna, co-founder of TaxiForSure. The round included participation from six angels including Naman Sarawagi of FindYogi and Afsal Salu, co-founder of Delyver (acquired by BigBasket) among others. The proceeds will go towards expanding to more areas of Bangalore, scaling up manpower, and setting up more warehouses across the city.

DailyNinja, founded by Sagar Yarnalkar and Anurag Gupta, allows users to subscribe for daily needs such as milk, bread, eggs, curd, dosa batter, paneer and water cans. The startup that started operations 4 months ago is now operational in Marathahalli and Mahadevapura areas in Bangalore.

DailyNinja executives pick up a building, talk to the association, and then their customer relations executive goes door to door to set up the app for each household. Customers can easily start their subscription, and the app enables them to have a daily user wallet wherein they are required a maintain a certain minimum balance.

Similarly, the vendors aboard also have an app built for them. The firm has warehouses where it stocks the goods, which are then delivered in the morning slot of 6-8 am, which is when these items are mostly needed. 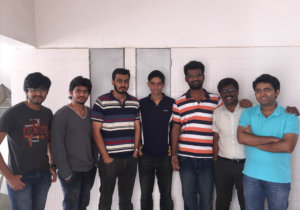 Aprameya, the lead investor for the round, stated, “The daily needs market is a subscription based one. The target audience is huge and yet this vital market is untapped. Team DailyNinja has come up with a perfect solution to deal with this highly unorganised sector. I liked the speed of execution and vision with Sagar and Anurag are going about it.”

Within 4 months of its operations, the app boasts of 500 transactions per day, with the average order size ranging being less than $1 (INR 50). The team of eight members hopes to scale this up to 5,000 transactions a day by expanding to more areas of Bangalore. Also in the pipeline, are plans to commence operations in Mumbai.

Though there are many players in the hyperlocal marketplace such as Grofers, Bigbasket, Shadowfax, Pickingo, Jugnoo, Zopper, Peppertap  and even players like Amazon, Ola, Snapdeal, and Flipkart have entered the segment, but, Sagar feels that they are not much of a competition in the daily needs subscription market. Plus, their strict delivery times will ensure that they are able to carve out a niche for themselves, even in the hyperlocal space.

Last month, another such subscription service startup based out of Pune, RainCan, also  raised about $100K in a funding round from angel investor Ajeet Khurana and a few others.