Google-backed VerSe Innovation, the parent company of news aggregator Dailyhunt and social short video platform Josh, has witnessed a 2X jump in losses in the financial year ending on March 31, 2021. 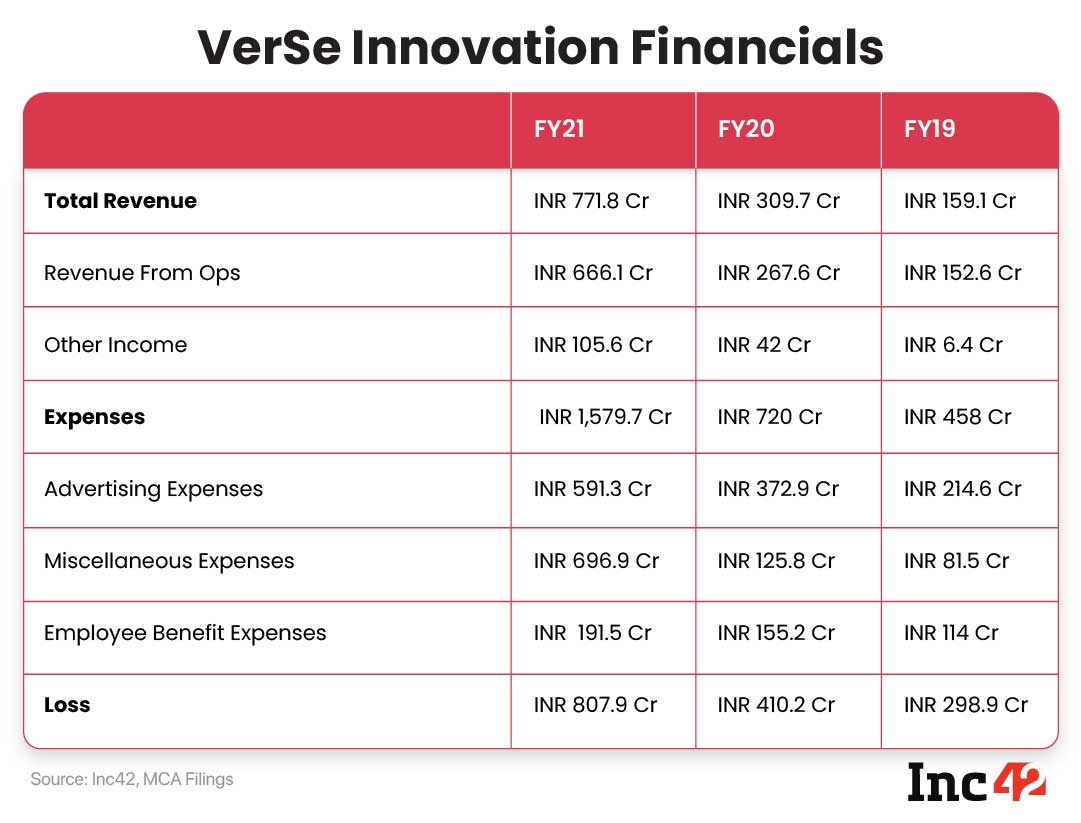 The startup through its revenue from operations or services has earned INR 666.1 Cr, a sizable jump from INR 267.6 Cr it witnessed in FY20. To further give a comparison, in FY19 the startup had generated INR 159.1 Cr in revenue.

VerSe Innovation, under its other income posted a revenue of INR 105.6 Cr in FY21, a noticeable jump from INR 42 Cr it had seen in FY20.

Under its other income, it has posted INR 99.2 Cr for interest on income tax refund and INR 6.3 Cr for miscellaneous non-operating revenue.

The startup’s total expenses rose to INR 1,579.7 Cr, a 2X rise from INR 720 Cr it spent in FY20. Its expenses rose on the back of increase in employee welfare and advertisement expenses.

Under its employee benefit expenses, which mostly comprises salaries of employees and directors’, gratuity, among other employee welfare benefits, VerSe spent INR 191.5 Cr in FY21, a marginal jump from INR 155.2 Cr it clocked in FY21.

Its other expenses mostly went on advertisement and miscellaneous spends. For example, for promotional activities, the startup spent INR 591.3 Cr, whereas it had spent INR 696.9 Cr during FY21 for its miscellaneous expenses. The startup’s EBIDTA margin stood at – 99.6% for FY21.

The Making Of VerSe Innovation

Founded by Virendra Gupta in 2007, VerSe Innovation, initially catered to telcos and mostly provided SMS alerts on jobs, property, matrimony, news and education subscribers across India, Bangladesh and Africa. It later tried to bet on B2C market by acquiring Eterno Infotech to launch Newshunt in 2009. Later Newshunt was rebranded to Dailyhunt and went on to become one of the most recognisable news apps found on Indian smartphones.

Much later, post TikTok’s India exit, the startup launched its social short video platform Josh to compete against its Indian counterparts such as  Chingari, ShareChat-backed Moj, and Instagram, among others.

On the other hand, Dailyhunt competes against the likes of Addition-backed Inshorts, among others.

VerSe Innovation was one of the last startups to enter the unicorn club in 2020. In August last year, it bagged $450 Mn at a round $3 Bn valuation from Siguler Guff, Baillie Gifford and Carlyle Asia Partners and others.

The content unicorn further bagged $28 Mn from The Canada Pension Plan Investment Board earlier this year.

VerSe Innovation to date has raised around $1 Bn from external investors. It counts Microsoft, Sofina Group, Alpha Wave Ventures, among others as its marquee investors.

VerSe claims that its two products Dailyhunt and Josh have been used by more than 350 Mn users so far.