According To A Blocking Firm AdGuard, 220 Popular Websites Are Currently Home To These Cryptocurrency Mining Parasite-Scripts. Computer hardware is costly, and so is mining cryptocurrency these days. Skipping these hardware issues, miners have now found a new way of mining, by attaching parasite-scripts to various websites. According to an adblocking firm AdGuard, almost 220 popular websites are currently home to these parasite-scripts. Interestingly, almost half-a-billion users use these crypto-mining scripts whenever they open any of those 220 websites. These websites have raised almost $43K through these parasite-scripts at almost zero cost.

On the Alexa list of the top 100K websites, AdGuard looked for the codes for CoinHive and JSEcoin, the most popular solutions for browser mining in use now. The company found  220 sites that launch mining when a user opens their main page, with an aggregated audience of 500 million people. Almost one in every forty websites currently mines cryptocurrency by employing their host computers’ CPU. In case of websites mining cryptocurrency from host’s computer, mining parasitises the user’s CPU, where ads parasitise users’ attention, emotions, bandwidth, and often, their laptop or smartphone battery, and supports an industry of personal data harvesting that is a big headache in itself. The biggest issue with these practices is that they don’t even ask for users’ consent for the same, and hence are unethical. 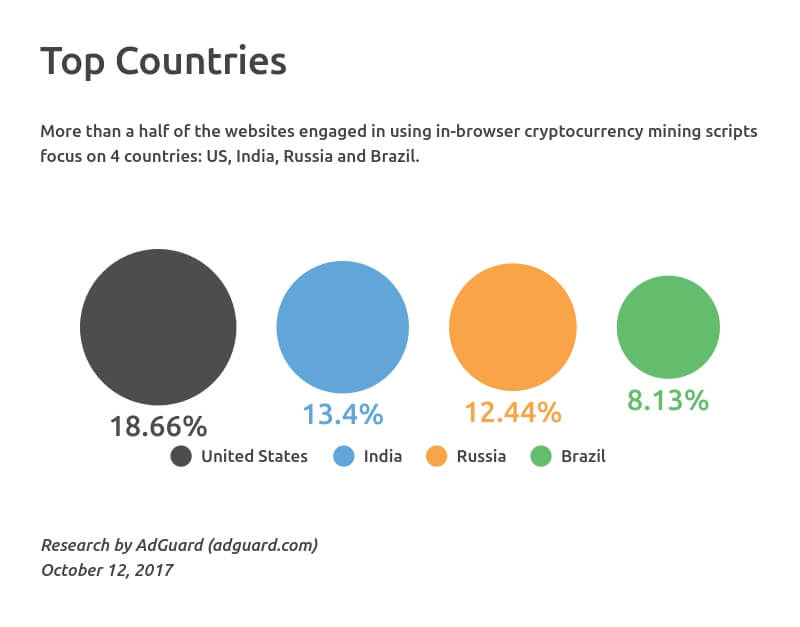 The 500 Mn users come from all over the world, majorly from the US, China, South American and European countries, Russia, India and Iran. While the worst affected country is the US with 18.7% of websites engaged in using in-browser cryptocurrency mining scripts coming from the US.

According to AdGuard, “It was the largest torrent search engine, Pirate Bay, that made CoinHive famous by using it. But among the “early adopters” of CoinHive were the Web properties of CBS’s Showtime network, Showtime.com and Showmeanytime.com.” CoinHive disappeared from the CBS sites shortly after media coverage of this activity began to break out. The assumption was made that the mining had been a private initiative of some adventurous Webmaster within the Showtime network.” 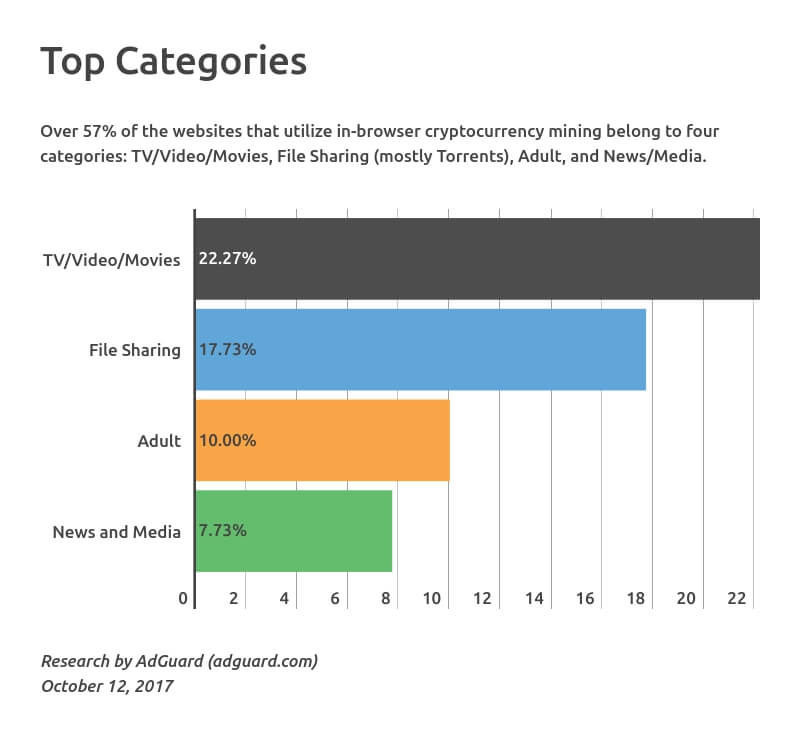 Recently, the CoinHive team has issued a statement calling on website operators to inform their users about the mining operations and to ask for user permission to do this. Parasite-scripts and unregulated cryptocurrency distribution are the major part of cryptocurrency architecture that makes mining and ICOs hugely suspicious among the governments of various countries and their regulatory bodies.