BYJU’S had raised $500 Mn in a funding round led by US-based private equity investor Silver Lake. The round valued BYJU’S at $10.8 Bn

India witnessed the first signs of the edtech wave 10-15 years ago with the widespread adoption of smart boards and enterprise resource planning software (ERP) in physical classrooms. Soon, the popularity of ‘coaching classes’ for various competitive exams saw similar offerings for exam preparation being offered online, with live video sessions and mentor feedback pushing the demand for online learning platforms.

As per Inc42 Plus report “The Future Of Edtech In India – Decoding The $10 Bn Market Opportunity Report 2020”, the country’s first edtech unicorn, BYJU’S has emerged as the most frugal edtech startup in FY19 as it expanded its revenue by $123 Mn over FY18 to FY19 whereas the expense grew by $116 Mn.

BYJU’S has seen tremendous growth in the last few months. Since the lockdown, it has added over 25 Mn new students on its platform. On August 5, BYJU’S acquired the Mumbai-based online coding platform WhiteHatJr for $300 Mn. 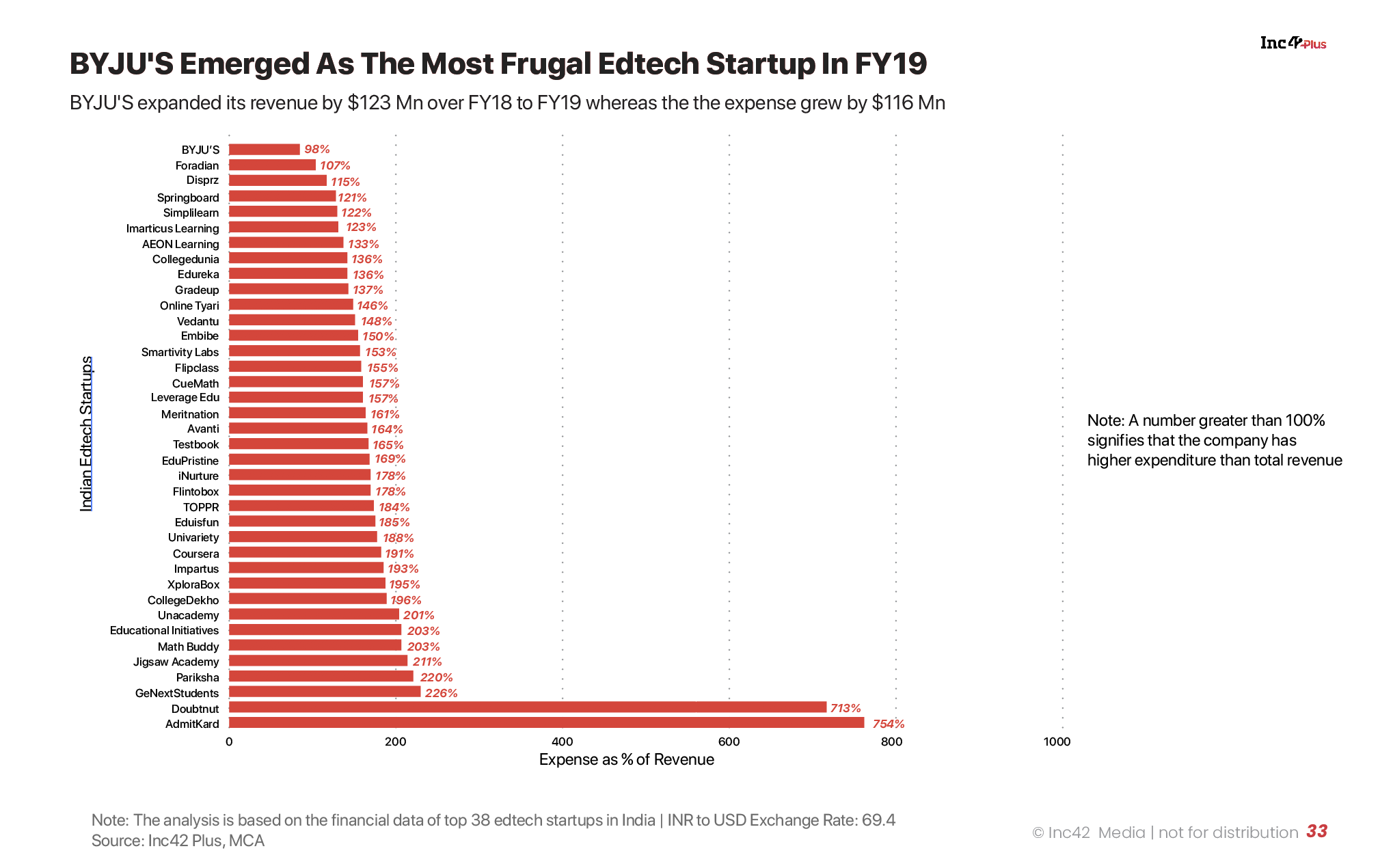 BYJU’S is a significant player in India’s burgeoning edtech space catering to learning needs by offering online lessons to school-going students, as well as comprehensive courses for competitive exam preparation. Founded in 2008 by Divya Gokulnath and Byju Raveendran, BYJU’S recently raised $500 Mn in a funding round led by US-based private equity investor Silver Lake. The round had valued BYJU’S at $10.8 Bn. BYJU’S is currently the highest valued edtech startup in the world and has noticed an uptake in its user base since the lockdown. Overall, it has a user base of 64 Mn students, of which 4.2 Mn has annual paid subscriptions.

According to the report, there are around 4450 edtech startups in India. Although more than 1,150 had been shut down and more entities are coming up in this space. Of the 38 edtech startups in India, only eight are EBITDA positive. The market size of edtech is expected to grow 3.7x in the next five years in India from $2.8 Bn (2020) to $10.4 Bn (2025).