From exercising caution over Bitcoin cryptocurrency, the Government of India could finally be moving towards compliance.

The Inter-Disciplinary Committee’s report is expected to be announced by the end of July, after which the Securities and Exchange Board of India (SEBI) may be asked to step in to regulate transactions.

So, if Bitcoins are legalised in India, the following would happen:

Interestingly, the news comes around the same time when the Bitcoin trade analyst, Chris Burniske, highlighted that trades from India accounted for 10% of global cryptocurrency trade, in May. 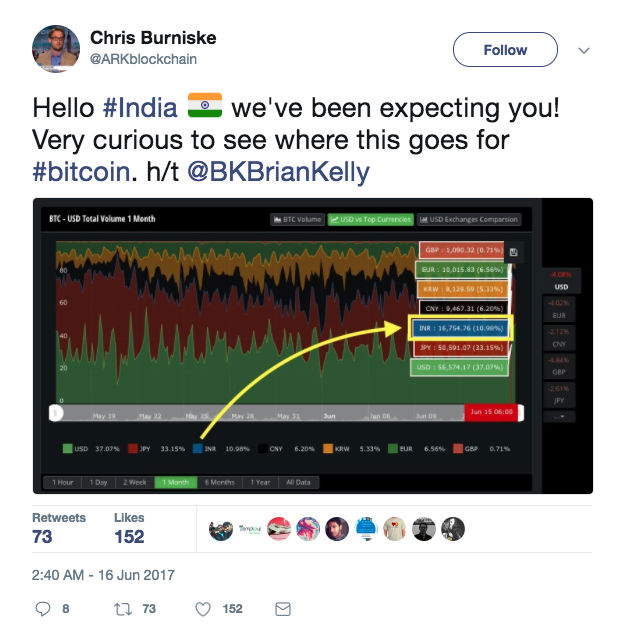 But sample this. While India still mulls over legalising cryptocurrency, China’s central bank — the People’s Bank of China — has already developed a prototype of a cryptocurrency that it could end up circulating it in the near future. It would be introduced alongside the China’s primary currency, the renminbi or the yuan. China will be simulating possible scenarios and running mock transactions using the cryptocurrency with some commercial Chinese banks.

Bitcoin And The Indian Government

Over the past few years, despite the lack of regulations in the Indian digital currency industry, a few Bitcoin exchanges have sprung up and started operating with self-regulated trading platforms with strict Know Your Customer (KYC) and anti-money laundering systems in place. These include startups like Zebpay, Coinsecure and Unocoin.

These startups have also raised funding from investors and have slowly been building faith in the Bitcoin and digital currency sector despite skepticism from the government.

For instance, Bengaluru-based Bitcoin startup, Unocoin, raised $1.5 Mn in a Pre Series-A round from Blume Ventures, Mumbai Angels and ah! Ventures last September. Similarly, Ahmedabad-based mobile Bitcoin wallet startup, Zebpay, raised Series A funding of $1 Mn from angel investors in January 2016. And Bitcoin trading platform Coinsecure raised $1.2 Mn as part of its Series A investment round from an undisclosed investor in April 2016.

In 2015, the RBI published a  financial stability report on disruptions in financial technology. In the report, it identified the importance of ‘private blockchains’ which have the potential to transform how bank back-end operations function, as well as increasing the speed of payments. The bank said that with its potential to fight counterfeiting, the blockchain is likely to bring about a major transformation in the functioning of financial markets, collateral identification, and payments systems.

In December 2015, former RBI Governor Raghuram Rajan had stated that digital currency was ‘fascinating’ and that India’s central bank could use digital currencies. He had said, “I have no doubt, that down the line, we will be moving towards primarily a cashless society and we’ll have some kind of currencies like this which will be at work.” 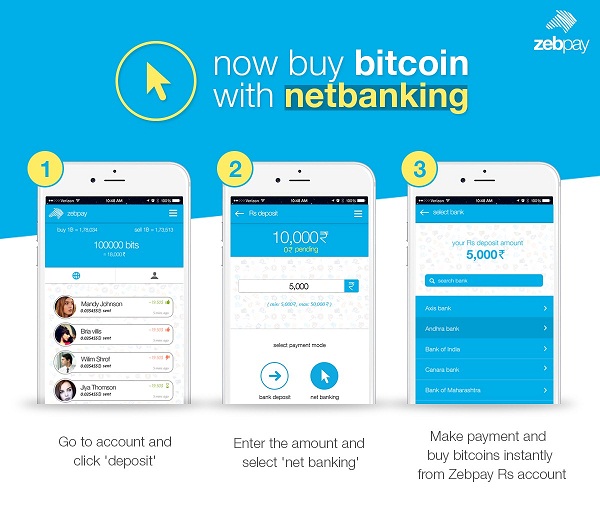 But in February this year, the RBI issued a cautionary press release, on the back of an earlier one issued in December 2013. The release warned users of the risk they are likely to already be aware of. Namely, that the RBI does not regulate and has not licensed any virtual currencies in India. Hence, anyone using them does so at their own risk.

However, in the backdrop of the growing use of Bitcoins post demonetisation and the stringent self-regulations being followed by Bitcoin exchanges, it seems the government has taken note of the fact that it can’t shy away from virtual currencies anymore. Especially when regulators elsewhere are adopting proactive measures.

Consequently, in April this year, the Department of Economic Affairs in the Ministry of Finance in India formed the interdisciplinary committee to examine the framework on virtual currencies. In addition, the government initiated a discussion on its forum, MyGov, to seek public opinion on virtual currencies. Clearly, despite initial reservations, the Indian government is keen on understanding how Bitcoin works and is willing to deploy resources to build frameworks.

According to the MyGov site, nearly 4,000 comments were submitted in recent weeks. 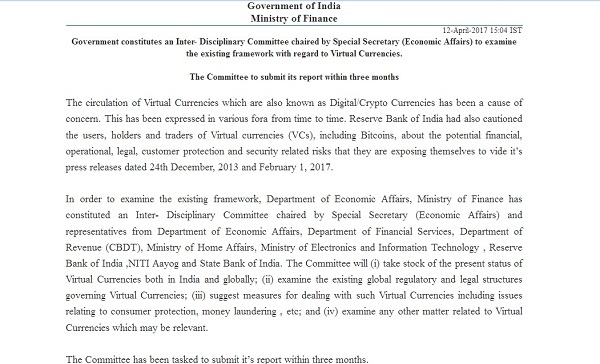 Additionally, private Bitcoin companies have even formed their own association – the Digital Assets and Blockchain Foundation India (DABFI). The self-regulated entity is working towards educating the masses about cryptocurrencies and informing them about best industry practices for businesses.

No wonder, Bitcoins users are ecstatic with the government’s interest to take a serious first step towards recognizing and regulating cryptocurrency. In April, Mohit Kalra, CEO of Coinsecure, had told Cointelegraph in an interview, “Finally, something positive for the industry (sic). Authorities are now taking this technology seriously. We have been trying to get their attention for years now. I am glad it’s all happening at the right time. At Coinsecure, we are seeing a massive increase in the number of users and volumes. We are positive with what will happen in these coming three months.” 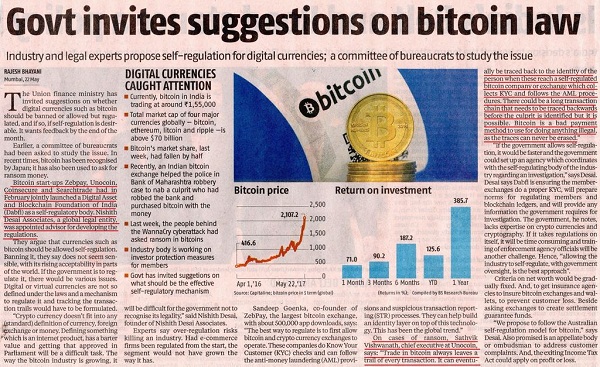 The Impact Of Bitcoin’s Legalisation In India

The first impact of the legalisation of Bitcoin in India is expected to further increase trading volumes and Bitcoin activities in India by significant margins. Legalisation would also allow Bitcoin startups to address concerns over security and risks pertaining to the use of Bitcoin and eventually work towards improving its infrastructure.

Such a stance by the government would show that they want to encourage innovations on one side and be at par with the digital needs of Indians on the other. Such legalisation also should be accompanied by the tailored regulations for this new technology to fully unleash its potential.

Legalising would also help remove apprehensions around its reliability as a currency for the average Indian consumer. On the other hand there have been reports of Bitcoin trading amounting to money-laundering and that it propagates the financing of terrorist outfits.

More so, to assuage these fears, Bitcoin startups in India are implementing multiple security checks. All Bitcoin companies seek a valid ID proof from users that include government-verified address documents, a Permanent Account Number (PAN) or an Aadhaar number.

Zebpay Co-founder Saurabh Agrawal told Inc42 how any regulation that comes in would be good for consumers. He said, “Frankly speaking, we have no official confirmation from the government on what it is trying to do. So we will have to see what they come out with, what kind of regulations they are looking at. But of course, any regulation which comes in is good for the consumers in terms of trading and holding Bitcoins.”

He added that Indians generally are showing greater interest in cryptocurrency because of surging Bitcoin prices. 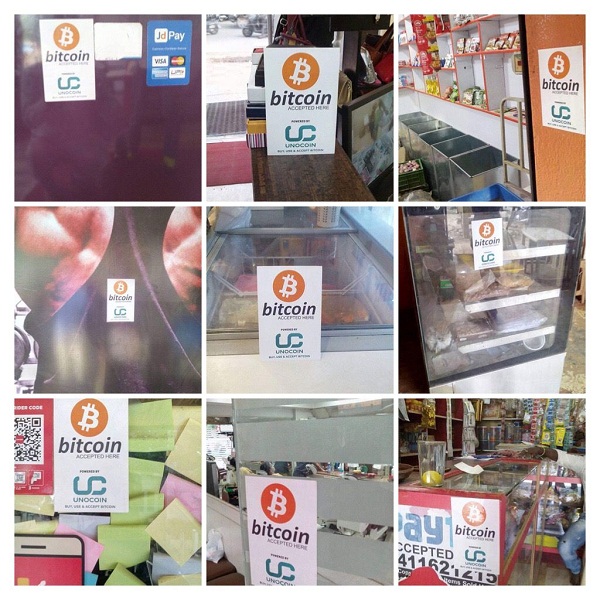 Legalisation will have other benefits too.

And one of them is increasing trust in private money over stable currencies. Sanjay Mehta, an investor in Altcoins, alternative cryptocurrencies launched after the success of Bitcoin says,

While Bitcoin is mainstream and many have heard about it, I have invested in half a dozen Altcoins which are point solutions using blockchain technologies. I have seen tremendous growth and benefits because of decentralisation of power. I think that in the future people will have more trust in private money than government one. Today, the government is free to print as much money they want or withdraw which is what happened in demonetisation in India. This is also because there is a central bank control. But, in the world of cryptocurrency because power is decentralised, while value is driven by supply and demand but float remains constant. Just like the number of Bitcoins in circulation is not expected to be more than 21 Mn.

Scope Of Bitcoins and Cryptocurrency

With the government legalising it, Bitcoin service providers will also be able to expand the scope of usage. Currently, Bitcoins are used to make purchases through mobile apps, buy gift vouchers, for airtime top up, and for paying bills. But in the future, an improved infrastructure would help support remittances to India and also provide online financial solutions for the country’s unbanked and underserved population.

Bitcoin makes it extremely easy to send a small remittance back home which could save up to billions in fees paid to third parties for a country like India, which is the world’s largest remittance market at over $60 Bn annually.

For India, the time is ripe to leverage the Bitcoin revolution. Especially when Bitcoin prices are surging through the roof. Last month, Bitcoin broke all its previous records when it achieved a new milestone. The value of Bitcoin reaching $2,000 per coin for the first time in history.

The reason for this achievement? Japan legalised the currency in mid-March this year. Thus unleashing a spike in Bitcoin trade which not only impacted the Bitcoin price in Japan but also led to a surge in global prices.

Today, Block.one, a developer of blockchain technologies for businesses will launch the sale of a new blockchain-based digital currency or token called EOS. The sale is the latest capital-raising exercise by a technology startup creating its own digital currency and selling tokens to the public (also known as an ICO or Initial Coin Offering). The company wants EOS to be used by large businesses, enabling corporations to automate processes, monitor assets, and create multiple applications.

India And Concerns Over Bitcoin

Bitcoin’s future in India too looks promising. As per a BitConnect report, India Counts over 1 Million Bitcoin Users. In fact in India, with thousands of new users flocking to Bitcoin every day, exchanges have been overwhelmed leading to downtime and slow processing of transactions last month. Zebpay reports over 500,000 downloads of its mobile app and is adding about 2,500 new users every day.

At the same time, doubts about Bitcoins are also abounding. Snehil Khanor, Vice President at Spice Digital Limited stated, “As an Indian citizen, I am currently a little apprehensive about investing too much in Bitcoin as I am not aware of what kind of taxes the return will attract. Or will it attract unwanted attention if and when I choose to withdraw? Right now there are three reliable exchanges in India but once it is legalised, bigger and more reliable companies many get into this. Hence, the presence of reliable exchanges will further contribute to more trade by Indians.”

The guess is that the apprehensions of Indian Bitcoin traders will hopefully be taken care of in the next month if indeed the government and RBI legalise it, thus enabling many Indians to legally partake and reap benefits from the global phenomena of Bitcoins and the underlying technology of BlockChain.

However, even globally, Bitcoin has a long way to go. And how long do you ask? Well, howmuch.net has the answer: Bill Gates’s net worth at $86 Bn is 2x times the market capitalisation of the Bitcoin market at $41 Bn! 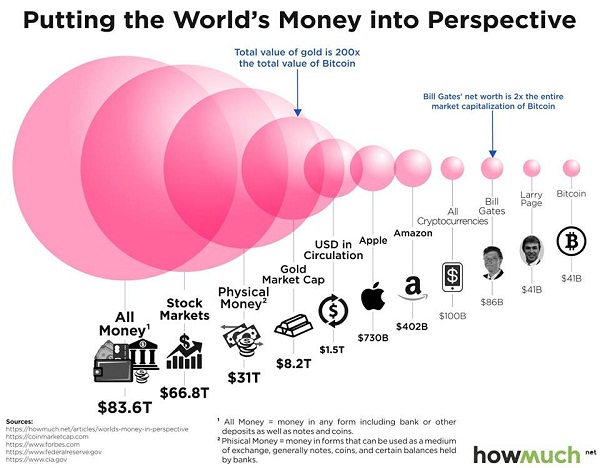