As Part Of The Event, Two Chandigarh Based Startups, Heuristech Labs And Pind Fresh, Got The Chance To Exhibit Their Grand Ideas 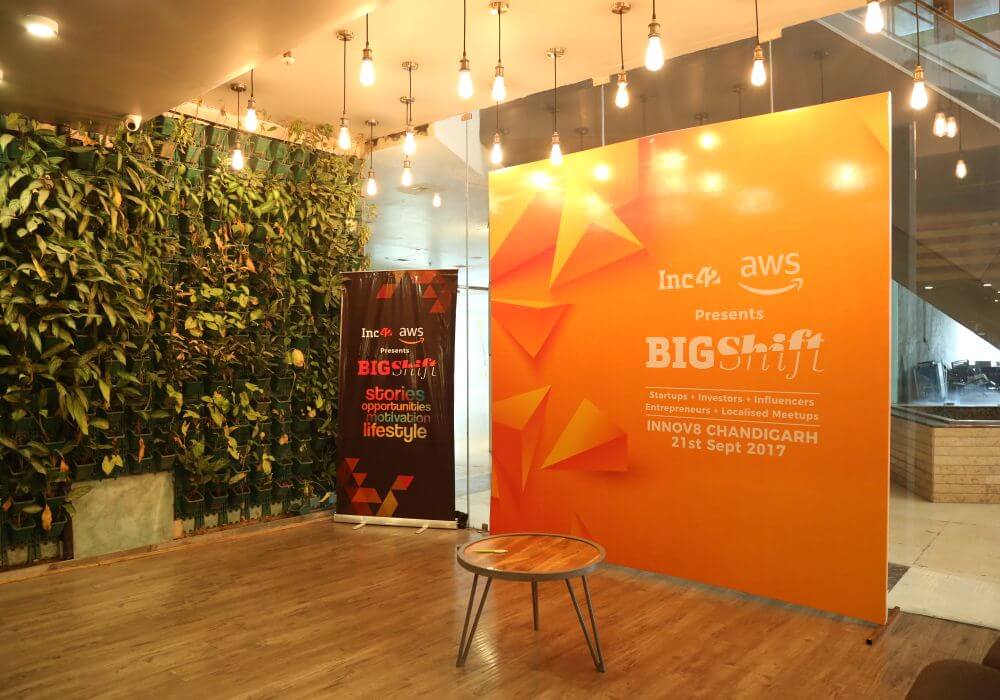 Gone are the days when Bengaluru, Mumbai and Delhi were hailed as the sole cradle of innovation and invention. Entrepreneurship is no longer confined to these tier I cities but is increasingly gaining traction in tier II and tier III cities as well. To bolster the fledgeling startup ecosystem beyond Tier 1 cities, Inc42 has partnered with Amazon India to host BIGShift across eight Indian Tier II cities. The first instalment, which was held on September 21, saw prominent startup founders, influencers, investors, and ecosystem enablers coming together in Chandigarh for an engaging and stimulating discourse on the struggles of starting up and raising funding. As part of the event, two startups were also offered the opportunity to showcase their ideas and products/services.

Startups play a crucial role in driving India’s economic growth and enhancing the access of the country’s 1.31 Bn population to latest technologies. Despite lack of robust infrastructure, insufficient funding, low awareness and limited scalability, tier II and tier III cities have harboured a growing army of startups and businesses in a variety of emerging sectors. In recent times, several angel networks and investors have started focusing on these cities for investment perspective.

Through the BIGShift event, Amazon India and Inc42 are looking to support the startup ecosystem that is building up in tier II and III cities of India. The aim is to help bridge the gap that currently exists between the ecosystems in tier I and tier II cities by making the essential resources available to fledgeling startups in these geographies.

Envisioned as a series of events spread across eight tier II cities, BIGShift brings together startups, shareholders and ecosystem enablers from each city, providing them with a platform to engage, network and collaborate. The events include panel discussions, and interactive sessions in eight cities viz Chandigarh, Ahmedabad, Bhubaneshwar, Nagpur, Kolkata, Vizag, Ranchi and Indore.

The first edition of BIGShift, which took place at Innov8, Chandigarh, was a resounding success.

Chandigarh has always been a forward-thinking city. As one of the early planned cities in post-Independence India, Chandigarh is synonymous to perfectly manicured lawns, breathtaking scenic beauty, and well-structured infrastructure. In the early 2000s, the city’s startup ecosystem received its first major economic boost with the arrival of IT-based companies like Trigma, Viprasoft, iNVERTEDi and uTrade Solutions.

Over the years, Chandigarh has served as a haven for a growing number of startups, including on-demand transportation service provider Jugnoo, Pumpkart, among others.

Assisting these startups is a robust network of investors, incubators, and ecosystem enablers. Chitkara Innovation Incubator, Startup Accelerator Chamber of Commerce (SACC) and Chandigarh Angel Networks are some of the investor forums active in the city. In recent years, many coworking spaces such as Startup in a Box, Start Hub Nation and Innov8 have set up shop in Chandigarh, in a bid to facilitate access to essential resources, mentors, equipment and tools.

Session One: Jugnoo Founder Samar Singla On His Entrepreneurial Journey 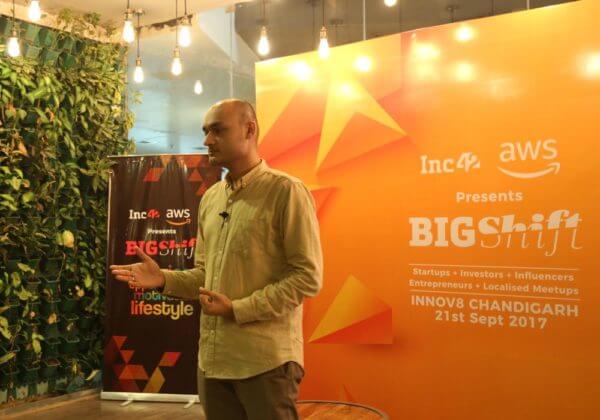 Held on September 21 at Innov8, Chandigarh, the event was attended by an eclectic crowd of startup founders, aspiring entrepreneurs and industry stalwarts based in the city. The event started off with an engaging storytelling session by Samar Singla, founder and CEO of Jugnoo and Click Labs.

In his narrative, Singla delved into the fascinating journey of Jugnoo as an on-demand auto rickshaw aggregator and food delivery startup. During the session, he touched upon the problems and challenges he faced while starting up, in terms of acquiring funding, finding quality talent and building a robust tech stack.

Talking about why he chose to start his venture in Chandigarh, Singla said, “There is this notion that Chandigarh does not have good talent or a proper startup ecosystem. A lot of it is true and also false. From a macro point of view, Chandigarh should be the best place to start companies. The people here are the most entrepreneurial anyway. I hope more people choose Chandigarh as the base for their startups.”

Following are some of the key takeaways from the session:

Singla concluded, “When we started raising funds, we realised it was not easy. At the time, we sent what could easily have been around 1,000 emails to angel investors. Thankfully, one of them decided to work with us. Later big investors like Flipkart, South Africa-based Naspers and others came to back us”

BIGShift is coming to Kolkata and Indore next! To learn more about the event and what it entails, click here.

Session Two: Panel Discussion On The Myths About Funding 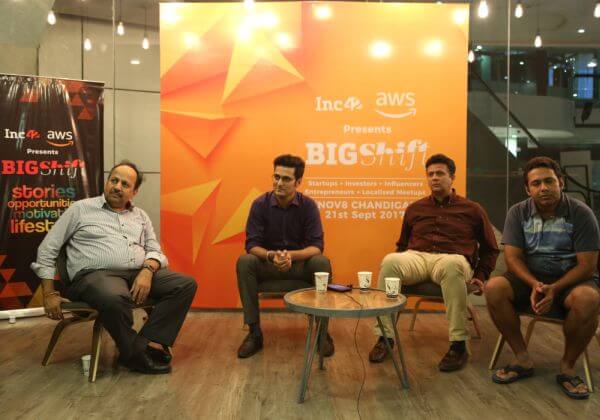 The session with Samar was followed by a panel discussion, in which Alok Ramsisaria, President of TiE Chandigarh; Sumeer Walia, Director of CEED/CIIF and Kunal Nandwani, Founder and CEO of uTrade served as speakers. The session was moderated by Vineet Khurana, Vice President at Chandigarh Angel Network.

The topic of discussion revolved primarily around the age-old question that entrepreneurs face when starting up: bootstrapping or fundraising. Sharing his views on the matter, Kunal said, “The easy and inconclusive answer is that it depends. It depends on what you are trying to do, what your time frame is, how fast you want to move and how much you want to scale. Most of the big stories that we hear about actually move very fast with the help of funding rounds. Not to say, you can run a business with raising funding. But, it clearly depends on the business you are in. Typically when we talk about funding, we mean tech-enabled, highly scalable businesses. In these cases, you need to move fast because your idea/product might get out and somebody else might develop a product faster than you.”

When asked about the startup ecosystem in Chandigarh, Sumeer answered, “One of the things that we have seen from practical experience is increased collaboration. Startups work as a community because most of them don’t have the support system. Even in our city, there is no immediate support system for raising money. When I joined, there were seven startups at our incubator. Now we have 47 startups.”

The Much Awaited Startup Showcase

In the concluding session, two Chandigarh-based startups, Pind Fresh and Heuristech Labs, were given the opportunity to showcase their ideas and business plans. 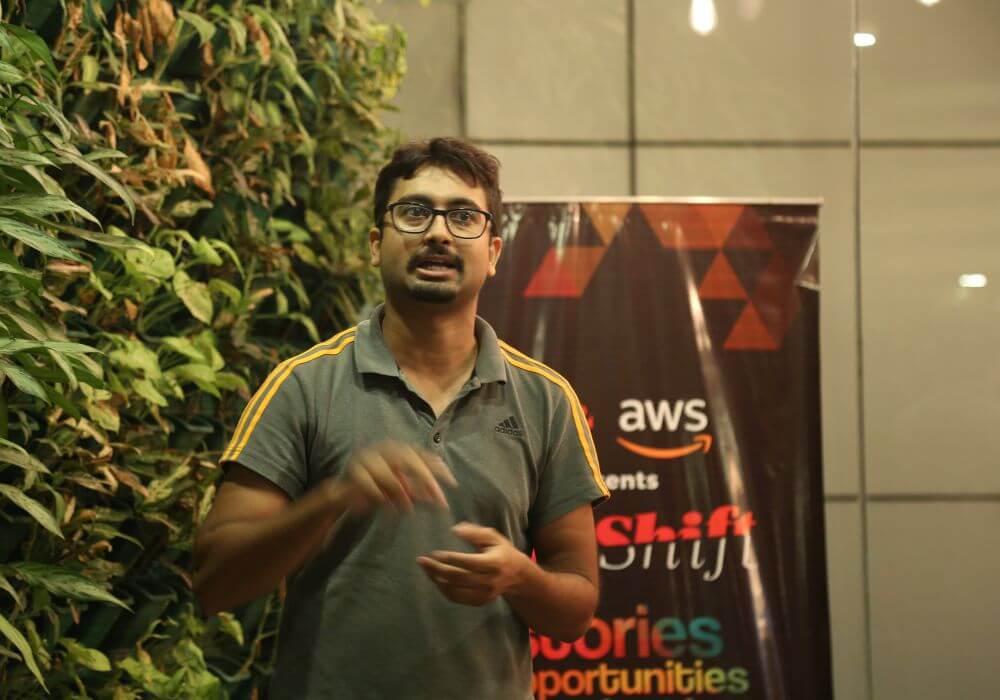 Founded in 2015 IIT alumnus and Ex-CSIR Scientists, Heuristech Labs specialises in developing smart automation solutions for consumers. The company build IoT based products and also performs analytics over user data. It currently caters to the smart home segment and aims to change the way people interact with their devices.

The startup’s flagship product comprises of a smart-hub for homes (HIVE) and variety of sensors and actuators (BEES). The smart-hub connects to any wifi-router through wifi or Ethernet. As revealed by the co-founder Gaurav Verma, Heuristech Labs is also working on adding gesture interface and Z-wave compatibility. 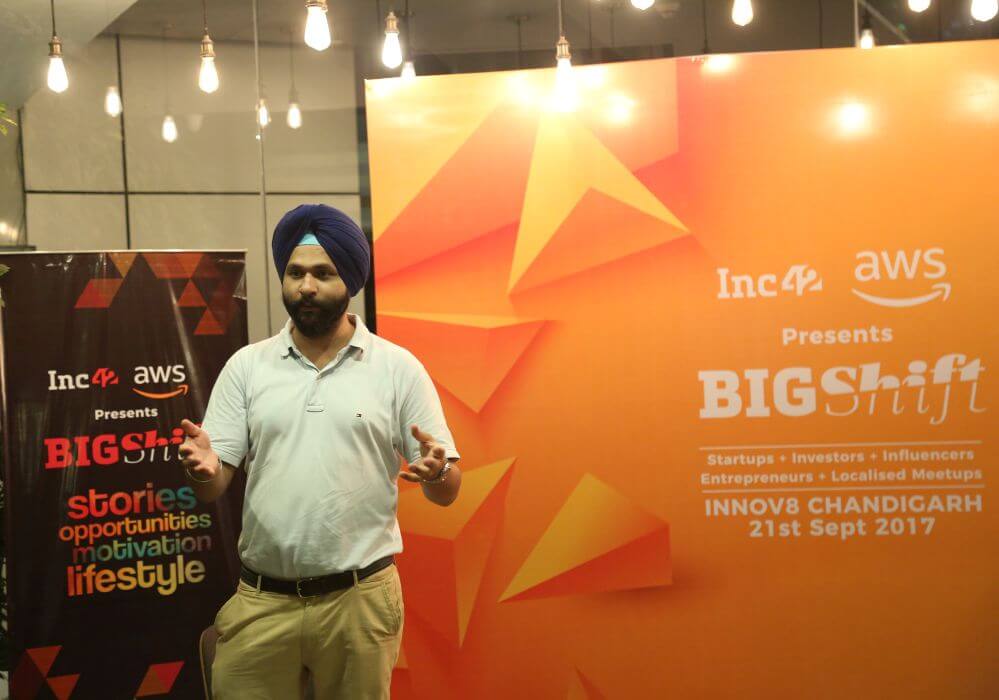 Pind Fresh is a green company with solutions for unadulterated food. Operating within the agritech sector, the startup aims to the way food is grown and consumed in the country. To that end, the company is working on creating a healthier, more sustainable system where food production is extended from the countryside directly to people’s homes using innovative, hi-tech and inexpensive techniques.

According to Pind Fresh CEO Somveer Singh Anand, the firm is developing systems that make it easier for anyone to grow healthy fruits, vegetables, and herbs right in their own homes, their rooftops, their balconies.

Technological advances in the last several decades have helped transform India into the world’s  third largest startup ecosystem, home to as many as 4,750 tech startups. Through BIGShift, Amazon India and Inc42 are doing their part in supporting the fledgeling startup ecosystem in tier II and tier III cities of India.

BIGShift is coming to Kolkata and Indore next! To learn more about the event and what it entails, click here.