A Petition On Change.org Appeals For Arrest Of Amit Bhardwaj 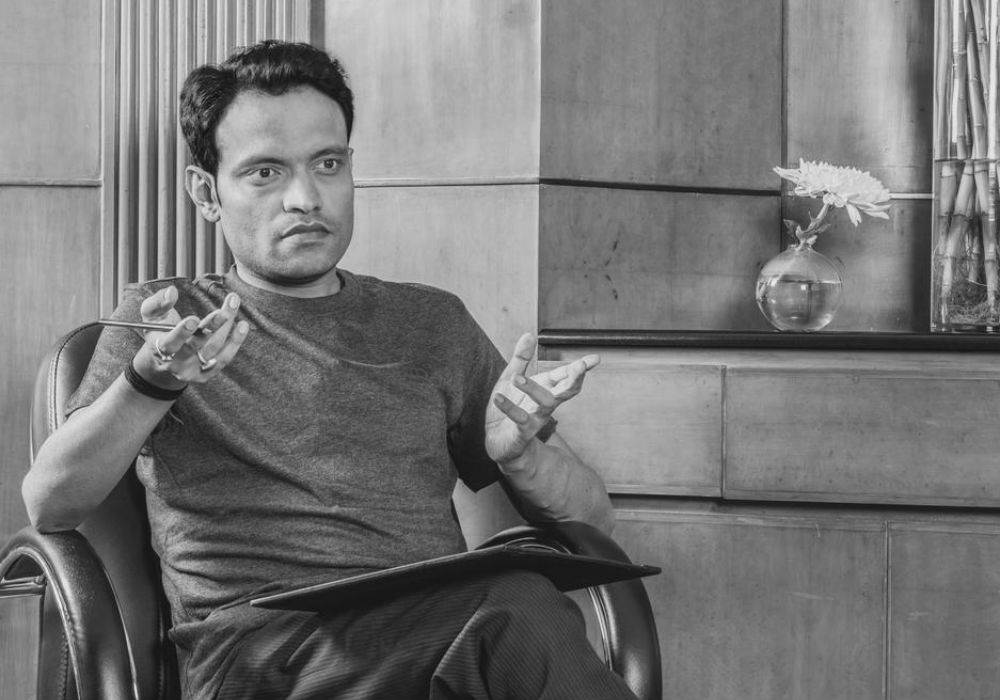 The interest in bitcoins is increasing day by day in India but so are controversies surrounding them. In the latest, Amit Bhardwaj, founder of two bitcoin companies – cloud mining operation Gainbitcoin and China-based mining pool GBMiners – has been accused of running a Bitcoin Ponzi scheme.

Three months back, Zakhil Suresh a Gainbitcoin user has started a petition on change.org. The petition appeals for Bhardwaj’s arrest for this allegedly fraudulent scheme. As per the petition, Suresh is a finance student, living in Kerala who, after getting interested in Bitcoins and Amit’s startup Gainbitcoins, flew to Delhi to meet him. He ended up investing in Bitcoins but when he tried to withdraw Bitcoins from the service, he could not.

More than a year has passed and Suresh claims that he is still awaiting Bitcoin withdrawals. According to the petition, Bhardwaj has also not responded to the claims.

He goes on to state, “I requested for my first withdrawal after 3 weeks and now even after one and a half years – my withdrawals are still pending. I contacted the support n number of times. Result: No Response. I e-mailed Amit. Result: No Response. 2 Months later after a meeting with a couple of top names in the Indian BitCoin Community, I told them about my experience with Amit and they told me more about him – He is a fraud!”

As per his LinkedIn profile, besides GBMiners and Gainbitcoin, Amit Bhardwaj is also the founder of AmazeMiners, an alt-coin mining company, since December 2016. He had also founded HightKart, which he claims to be India’s first Bitcoin-based ecommerce sites, but it closed in early 2016.

Meanwhile, as per data on Blockchain.info, GBMiners’ mining pool controls about 2.8% of the network hashrate.

Interestingly, today Bhardwaj has also announced the launch of his e-book, ‘Cryptocurrency for Beginners.’

Doubts about Amit’s alleged Ponzi scheme were raised in an article on the cryptocurrency news site Coinjournal back in January this year, which stated, “Many bitcoin cloud mining schemes have turned out to be Ponzi schemes over the years, and GainBitcoin is no different.”

Similar concerns were raised in an article in The Caravan by Aria Thaker in March this year after she interviewed Bhardwaj for a story on Bitcoins. As per the article, “He repeatedly contradicted himself and was evasive about the relationship between GBMiners and Gainbitcoin. He also admitted, with casual ease, that he had lied to his investors about crucial information regarding Gainbitcoin’s investments (“They feel good, right? When they get high information,” he told me about his customers, after admitting to using inflated figures on Gainbitcoin’s website.) Bhardwaj has been declared a defaulter in one of the six India-based entities he directs. For two of these companies, he has flouted the law by never filing annual balance sheets with the ministry of corporate affairs.”

The same facts were also highlighted in a report by FactorDaily today.

Last month, Aria in her tweet also brought to light the fact that all the seven new team member profiles listed on GBMiners website are fake. She stated that Bhardwaj himself is the sole contributor to nearly all of the ‘crunchbase’ profiles of these “new employees.” They are otherwise blank and have no social media footprint. 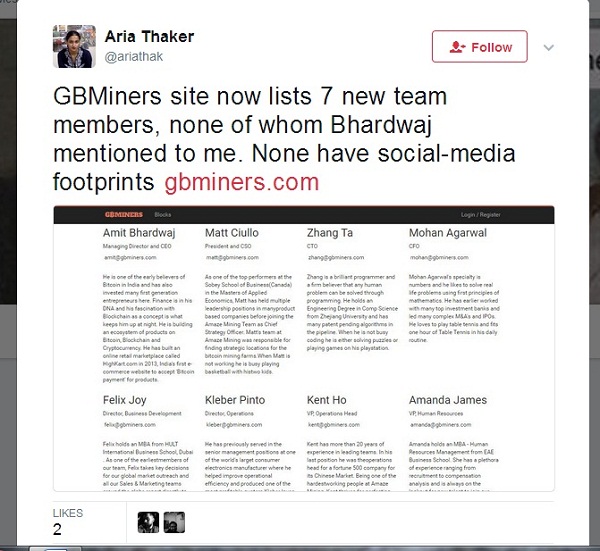 Amit is also associated with a few other Bitcoin and cryptocurrency-based companies/products. These include Bitcoin wallet service CoinBank and Bitcoin payment processor PayBitz. He is also said to be an investor in Satoshi Studios, which is said to be an incubator for blockchain startups in Southeast Asia.

We have reached out to Satoshi Studios’ founders and Amit’s corporate communication team for a comment.

Interestingly, Bitcoin startup Zebpay has made it clear several times on their website and Facebook page that cloud-mining companies , which guarantee fixed returns, are very likely scams. Gainbitcoin guarantees a 10% return on investments into their cloud mining scheme per month.

Bitcoin is witnessing a lot of interest from Indian users but the government is still to decide on whether it should make it legal in India. Till now, the RBI has maintained a cautionary stance on cryptocurrency stating that anyone using them does so at their own risk. The decision on legalising cryptocurrency is expected to be announced by the end of July.

Amit Bhardwaj and the alleged scam are an important marker as to why the murky and undefined world of cryptocurrency, blockchain, and bitcoin needs clarity and regulation – both from within the industry and from an outside authority.

Post publishing the article, Nikunj Jain, co-founder of Satoshi Studios, reached out to Inc42 and informed us that initially Satoshi was involved as the technology vendor for GBMiners but once they realised that they did not fully understand the fundamentals of the business, they ended their involvement with GBMiners. He also stated that Satoshi has returned the money they had raised from Amit Bhardwaj after they snapped ties with him last April.