As revenues for ride-hailing companies plummeted during the lockdown, both Ola and Uber had to layoff a sizeable chunk of their workforce in India 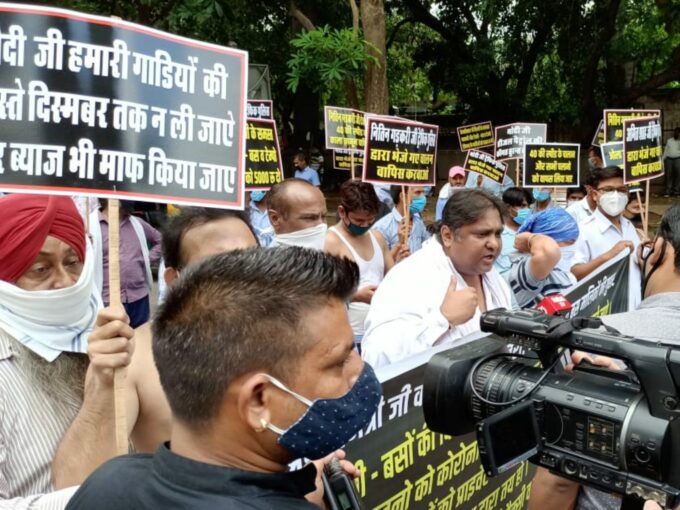 The prolonged country-wide lockdown to contain the Covid-19 pandemic saw cab driver Hemu Kashyap lose out on months of earnings. The only saving grace in the woeful situation then was the Reserve Bank of India’s (RBI) moratorium on repayments for all term loans. The moratorium was for payment of all instalments due between March 1, 2020, and May 31, 2020.

In May, the moratorium was extended for another three months, till August 31. However, drivers working with cab aggregators such as Ola and Uber complain that even as the country continues to unlock and a semblance of normalcy returns, customers are still hard to come by. In such a scenario, Kashyap was unable to pay the instalments for his vehicle, which was eventually seized by the bank on August 26.

Taking cognisance of the difficulties being faced by several drivers such as Kashyap, the Sarvodaya Drivers Association of Delhi (SDAD) organised a strike of drivers working with cab aggregators Ola and Uber on Tuesday (September 1), to protest for several demands, chief among them being an extension of the moratorium on loan repayments till December.

The drivers association is also demanding a hike in fares charged by cab aggregators for every ride and a reduction in commissions charged from the drivers.

Kamaljeet Singh Gill, the president of SDAD and the vice president of the Indian Federation for App-Based Transport Workers (IFAT) told Inc42 that the drivers weren’t just demanding an extension of the moratorium, but also calling out the “exploitative” policies of Ola and Uber.

“These companies charge us anywhere between 20-30% commission for every ride. The tax on inter-state travel, levied when we drive from Delhi to Noida or Gurugram is entirely paid by us. How is this fair on us?” asked Gill.

Shaik Salauddin, the national general secretary of IFAT concurred with Gill’s views. “Drivers have made these companies. We fuel the ride-hailing business. We had sent a plea to these companies, urging them to reduce their commissions which they charge from the drivers. It should be no more than 5%. We also asked them to provide health insurance, along with accident insurance to the drivers. However, there’s been no response from them so far so we are forced to take our protest to the roads.”

Gill proposed that the government should develop its ride-hailing application, along the lines of Ola and Uber, to offer some respite to the drivers. “These are profit-making enterprises who abandoned us during the lockdown when things got tough for us as there were no customers,” Gill said.

“The government had issued directives that all companies should pay their employees wages during the lockdown, but drivers didn’t receive any monetary compensation from these companies. We were entirely reliant on the Delhi Government’s relief centres for food,” he added.

It is worth noting that ride-hailing companies such as Ola and Uber function as platforms for drivers to get customers, and don’t directly employ drivers, or keep them on their payroll.

Nevertheless, Ola, through the Ola Foundation and its ‘Drive the Driver’ fund, claimed to have provided 9.3 Mn meals for 55,918 families of cab drivers and aided 843 medical emergencies for these families between April 1 and June 30, 2020.

As for the moratorium, Gill, on behalf of his association, wrote a letter to Prime Minister Narendra Modi on August 24, 2020. In the letter, Gill alleged that a week before the moratorium lapsed, banks had begun their process of recovery of loans by sending their “goons” to warn debtors, and ultimately seize vehicles.

“Banks shouldn’t bother us as we have no money to pay. We haven’t received much business since March and accordingly, the instalments for our vehicles, as well as insurance for the same, should be pushed till December,” said the letter, a copy of which was accessed by Inc42.

Gill had claimed that there would be more than 2 lakh drivers in Delhi NCR who would be supporting the call for the strike. However, he had added that a much smaller group of people would be present at the demonstration — which began from Mandi House in Delhi on Tuesday — owing to the seven-day state mourning announced due to the demise of former President of India Pranab Mukherjee on August 31.

When asked whether the strike would continue beyond September 1 as originally planned, Gill said that the association may decide upon a change of plans, as a mark of respect for the state mourning. Salauddin mentioned that the IFAT would conduct meetings with all stakeholders and state representatives, and decide upon a concerted country-wide action to protest for their demands.

On Tuesday (September 1), the day of the strike, IFAT uploaded videos of the demonstration on its Facebook handle.

In another video which Inc42 obtained from Punjabi Bagh in Delhi, drivers observing the call for the strike can be seen trashing the vehicle of another cab driver who chose not to participate in the demonstration.

Queries to ride-hailing companies Ola and Uber went unanswered by the time of publication.

Ola and Uber also felt the impact of the financial disruption caused by the Covid-19 pandemic and the resultant lockdown.

In May, Inc42 reported that the Bengaluru-headquartered ride-hailing company Ola had laid off close to 1,400 employees, which translated to almost a third of its India workforce, as revenues had plummeted by 95% in March and April. While announcing the layoffs in a mail sent to employees, the company’s CEO Bhavish Agarwal had said, “We had all hoped in the beginning that this would be a short-lived crisis and that its impact would be temporary….But unfortunately, it’s not been a short crisis. And the prognosis ahead for our business is very unclear and uncertain. It is going to take a long time for people to go out and about like before. The fallout of the virus has been very tough for our industry in particular.”

Uber’s global cost-cutting drive also reached India in May, when the company announced layoffs for 600 employees in India. In July, the company permanently shut its Mumbai office.