India currently imposes a 100% import duty on fully imported cars with a CIF value of more than $40,000, Tesla wants a rebate before its India debut

The war of words over lowering of import duty on electric vehicles (EVs) refuses to die down. Now, Maharashtra Environment Minister, Aaditya Thackeray, has shot off a letter to Finance Minister, Nirmala Sitharaman, in support of Tesla.

In his letter, Thackeray has urged the centre to slash import duty on imported electric vehicles in the upcoming Union Budget on February 1. He called on the FM to temporarily lower import duties for a certain period of time to boost India’s supply chain ecosystem and manufacturing process for EVs.

“Pioneering companies like Tesla, Rivian, Audi, BMW among many others must be given a time-bound concessionary customs rate for the import of vehicles for retail sale. This will drive the aspiration value in the market, boost investment in our supply chain and encourage the startup ecosystem to follow the lead of such companies”, said Thackeray in the letter.

He also suggested to the Centre that the concessionary rate could be imposed on the carmakers for a maximum of three years or for a defined limit of vehicles that any foreign company wishes to sell in India. He also called for concessionary rates to be given to automakers that invest in India’s auto supply chain or charging infrastructure. 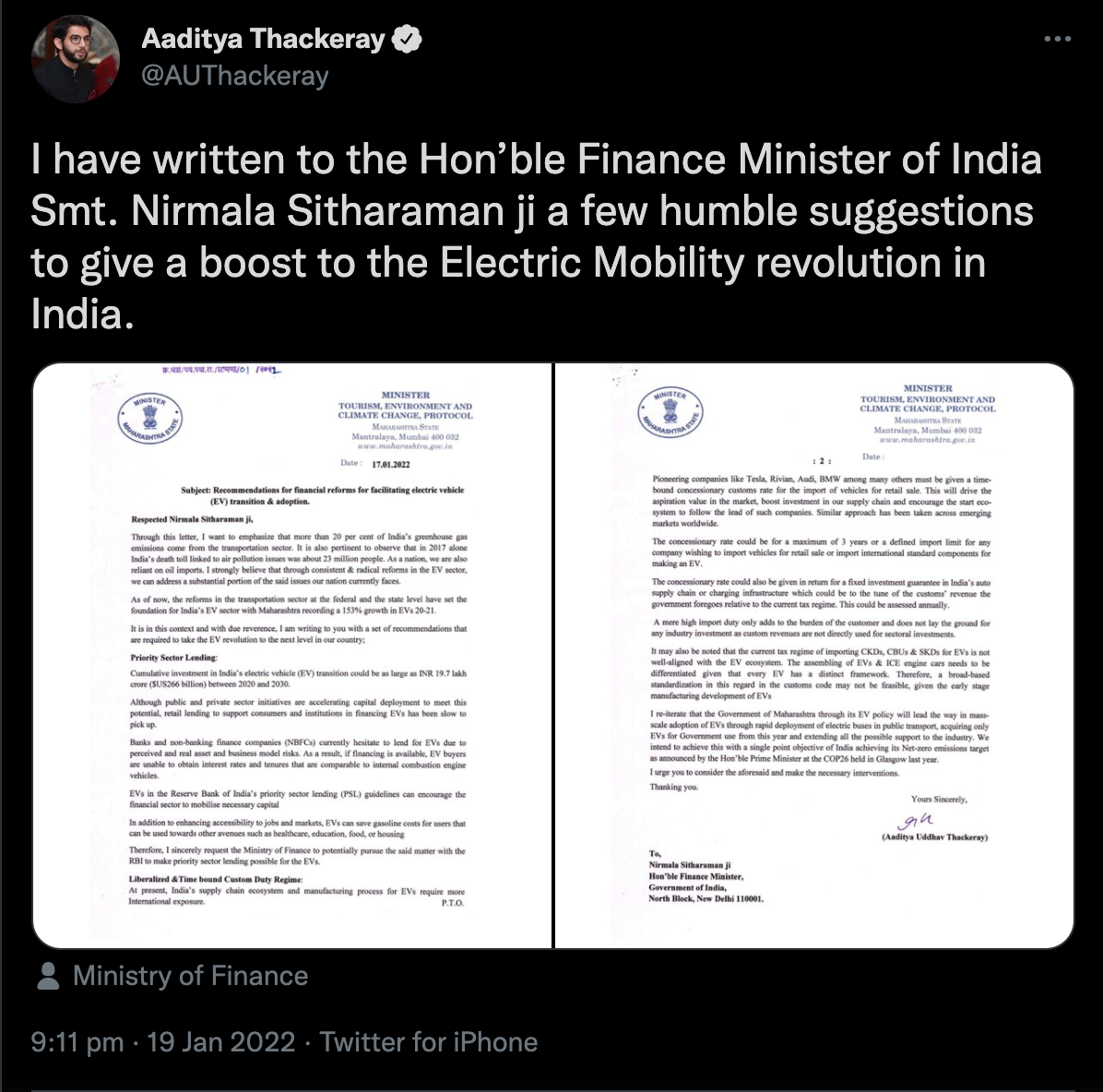 The political tug of war erupted after Musk tweeted that his company “was still working through with a lot of challenges from the Government.” In response, Ministers from Telangana to Punjab and from Bengal to Maharashtra rolled out a red carpet for Musk, inviting him to invest in their respective states.

The Tesla CEO has been at odds with the union government for many years now over issues ranging from setting up a local factory to the country’s high import duty regime. Tesla has been lobbying the government to slash import taxes on electric vehicles before it enters the market.

Government is apprehensive of any tax rebate to Tesla in a bid to promote the local industry that manufactures in India. The move could also ruffle feathers in the EV auto industry and might send a bad signal to other auto manufacturers who are complying with the current import tax norms.

Meanwhile, the EV four-wheeler space in India continues to heat up. Tesla faces tough competition from local automakers – Mahindra, Tata, Maruti – who manufacture in India. In addition to this, earlier this month, Mercedes-Benz announced that it will launch India’s first locally produced luxury electric car in 2022 itself.

While Tesla’s arrival could spur the adoption of EVs in India, the price slab of the automaker could easily play spoilsport. Tesla’s popular Model 3 which costs $39,990 – $54,990 (approximately INR 60 Lakh with import duties) could be way off-budget for price-conscious Indian households.

While the centre has been urging Tesla to specify its investment plans, the auto-maker has been non-committal about local manufacturing so far. In September last year, the Indian government had reportedly asked the US-based EV automaker to first start manufacturing its electric vehicles in India before considering any tax concessions..Rather, Tesla has been looking to import its vehicles from the Shanghai gigafactory.

In Aaditya Thackeray, Elon Musk has found another friend. While the union government appears adamant on its demand, what remains to be seen is what outcome this intervention bears.