The company announced that, JioPhone Next, which it has built in partnership with U.S. technology giant Google, will be launched on September 10

The biggest announcement today from a global business and economy perspective however is a $10.10 Bn clean tech push which will see the petrochemical giant transition from a hydrocarbon producer to a clean energy major 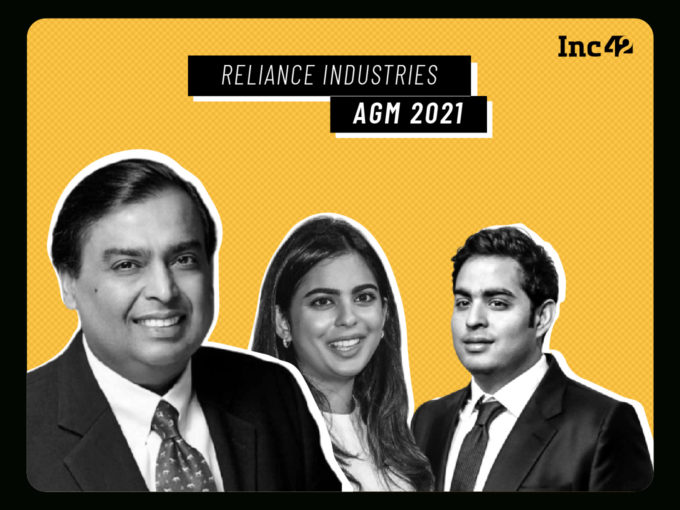 Reliance Industries chairman Mukesh Ambani on Thursday (June 24) outlined the progress Jio Platforms has made over the past year when the conglomerate raised a mammoth $44 Bn via private equity, rights and equity issues. Interestingly, Ambani said that over 50% of the company’s EBITDA (earnings before interest, tax, depreciation and amortisation) in the financial year 2021 (FY21) came from its telecom and retail businesses.

In the annual general meeting of shareholders held at Jamnagar today, the company announced that JioPhone Next, a smartphone it has built-in partnership with U.S. technology giant Google, will be launched on September 10. The smartphone, announced last year, has been at the centre of much speculation as it is billed to be the primary layer of distribution for Jio’s universe of digital product plays that includes retail, media and edtech, among others.

The biggest announcement today from a global business and economy perspective however is a $10.10 Bn clean tech push which will see the petrochemical giant transition from a hydrocarbon producer to a clean energy major. According to experts, the conglomerate’s push towards renewable energy might prove to be a much-needed fillip to the sector in India — a space where several tech startups have picked up early-stage funding over the years but have not seen much traction.

However, the 44th Reliance AGM had much more — from offering a peek into Jio’s ambition to become a healthtech major to stepping into the cloud space. Here are the key takeaways from the shareholder meeting:

Reliance’s online grocery delivery service JioMart recorded a high of 6.5 Lakh orders in a day in the first year of its launch, Reliance Industries chairman Mukesh Ambani said at the company’s annual general meeting in Jamnagar on Thursday (June 24).

“JioMart’s growth is a testament to its already loyal customer base, 80% of whom are repeat shoppers. JioMart new commerce’s aim is to transform and grow the small merchant ecosystem, so our merchant partners prosper,” Ambani told RIL’s shareholders.

RIL’s consumer-facing businesses across telecom and retail now comprise 50% of the company’s earnings before depreciation, interest, taxes and amortisation, he noted. The retail business has done well overall, despite the challenges thrown by the pandemic, the RIL chairman noted.

He added that over the past year, over 3 Lakh merchant or shopkeeper partners across 150 cities have come on board the JioMart Platform. The grocery delivery platform has seen a 3x growth in kirana orders and 2x growth in order frequency. Ambani said that expansion across cities is underway and one crore merchant partners will be onboarded to the platform over the next three years. 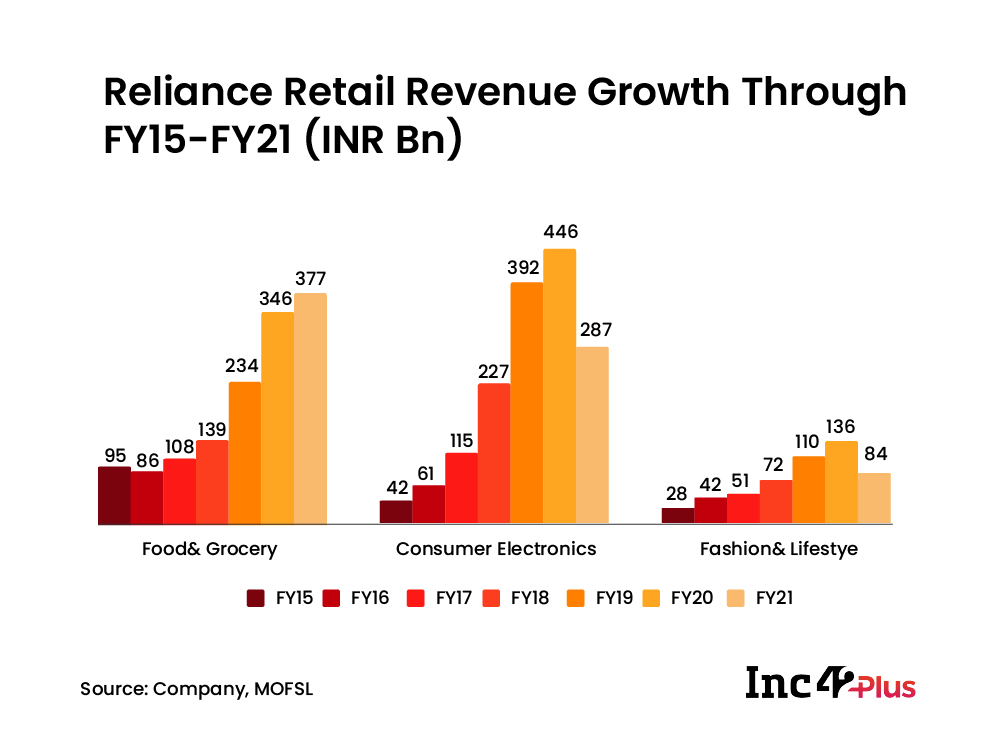 Jio Phone Next To Hit The Market

Jio and Google have jointly developed a power-packed and affordable smartphone ‘JioPhone Next’, which will be available in the market from September 10.

Ambani promised that the JioPhone Next will be the most affordable smartphone not just in India but globally.

Speaking at RIL’s annual general meeting, Ambani asserted that an ultra-affordable 4G smartphone is essential to make India ‘2G-mukt’ (free of 2G). The country still has nearly 300 Mn mobile users who are unable to escape from inefficient and exorbitant 2G services since most basic 4G smartphones remain unaffordable for users, he added.

“I am pleased to announce that Google and the Jio teams have jointly developed a truly breakthrough smartphone that we are calling JioPhone Next.

“JioPhone Next is powered by an optimised version of Android operating system…that has been jointly developed by Jio and Google…especially for the Indian market,” he said.

JioPhone Next packs a punch with cutting-edge features including voice assistant, language translation, automatic read-aloud of screen text, and smart camera with augmented reality filters, among others. 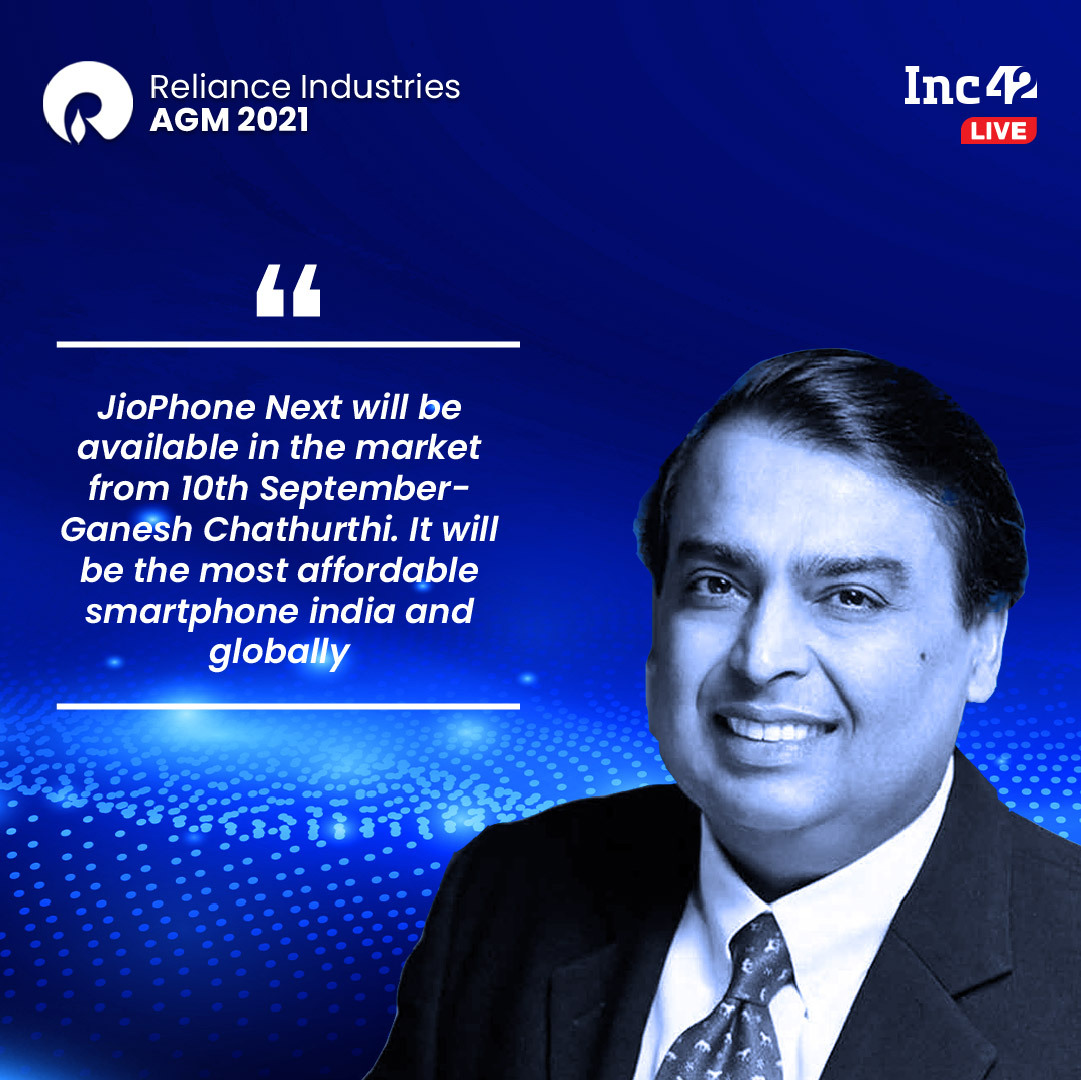 Jio and Facebook-owned WhatsApp are jointly developing new solutions to connect merchants with users and they will be launched in the next few quarters, Reliance Industries chairman Mukesh Ambani said in its annual general meeting in Jamnagar on Thursday (June 24).

Ambani also said that there has been an encouraging response from JioMart and WhatsApp integration in limited geographies in the country, and interesting feedback has come up which is being worked upon.

Last year, the social media giant invested $5.7 Bn (INR 43,574) in Jio Platforms, making Facebook a 10% shareholder in the company. Interestingly, it was the first investment announcement that kickstarted a $44 Bn fundraising blitzkrieg for the company where marquee investors like Google, Silver Lakes, KKR, General Atlantic, among others.

Jio Reaches For The Cloud

Alphabet Inc’s Google is forging a cloud partnership with India’s Reliance Jio Infocomm Ltd, helping the country’s biggest wireless carrier with tech solutions for its enterprise and consumer offerings as it plans to launch 5G services.

The tie-up lends Jio the expertise of a global tech giant as it expands digital services to small and medium businesses as well as hundreds of millions of individual customers. And it gives Google the unmatched scale of Reliance whose new-age businesses range from telecoms to e-commerce.

The Birth Of A Cleantech Giant

Ambani announced an INR 75,000 crore investment in new energy business over the next three years as the operator of the world’s largest oil refinery pivots towards a greener and cleaner version.

Reliance will build solar manufacturing units, a battery factory for energy storage, a fuel cell-making plant and an electrolyser unit to produce green hydrogen as a part of the business, chairman Mukesh Ambani said at the company’s annual general meeting with shareholders on Thursday.

It will also set up 100 gigawatts (GW) of solar power generation capacity by 2030 and invest in setting up a carbon fibre plant.

The company, which earns about 60% of revenue from its hydrocarbon-fuelled energy operations, had last year set a target of becoming a net-zero carbon company by 2035 – a shorter time frame compared to the 2050 cutoff self-imposed by many of its global peers, including BP and Royal Dutch Shell.

This comes as energy giants around the world come under pressure to move towards a low-carbon future to help improve the environment.

Ambani quietly announced its entry to the telemedicine ecosystem during the 44th annual general meeting of the conglomerate today.

The JioHealthHub telemedicine app, first announced in 2020, had outlined the company’s focus on healthcare, through its integrated digital healthcare platform, JioHealthHub. It was meant to enable people to book online consultations, securely store and share health records and book lab tests, among other services.

While RIL has kept a very low profile about  this app, which is still piloting with its employee base, the company today announced measures that seem to indicate that the platform is ready for launch. The app can be used for booking vaccination slots now.

“We have made the entire vaccination process very easy and accessible on our digital platform JioHealthHub with a click of a button, you can book a slot or download CoWin Certificates,” said Nita Ambani, founder-chairperson of the Reliance Foundation and wife of Mukesh Ambani.

She added that Reliance Foundation will offer this platform free of cost to all users. The platform has the ability to scale up to 1 Lakh vaccinations a day, that’s one crore vaccinations in 100 days.

Reliance Jio’s user base has increased by 37.9 Mn to over 425 Mn, Reliance chairman Mukesh Ambani informed shareholders. The company’s revenue for FY21 stood at INR 1,53,818 Cr, up 5.6% YoY, while EBITDA rose 1.5% to INR 9,842 Cr.  The oil to telco conglomerate is the revenue leader in 18 of 22 telecom circles in the country, Ambani told shareholders.

Reliance Jio’s parent company Jio Platforms had posted a net profit of INR 3,508 Cr for the quarter ended March 31, 2021, as compared to INR 2,379 Cr in the same quarter of the previous fiscal. Jio Platform’s consolidated revenue in FY21 stood at INR 86,493 Cr while it registered an EBITDA of INR 32,359 Cr. announced Mukesh Ambani. Reliance Industries announced that JioFiber acquired more than 2 Mn new premises over the past year till March 2021.  The fixed broadband operator now has over 3 Mn individual and business users, according to RIL chairman Mukesh Ambani. He further added that this makes JioFiber the fastest growing broadband service provider in India.

Speaking at the Reliance AGM, Ambani said that JioFiber has expanded its reach to more than 12 Mn homes and business premises with a deep fiber footprint in India’s top 100 cities. JioFiber services bundle high-speed internet connectivity, content and fixed line voice in a single plan, but last year, the company also launched connectivity-only plans as more and more Indians wanted to set up home connections for working from home and other needs. This launch has been counted as one of the highlights of the year by Reliance Industries.