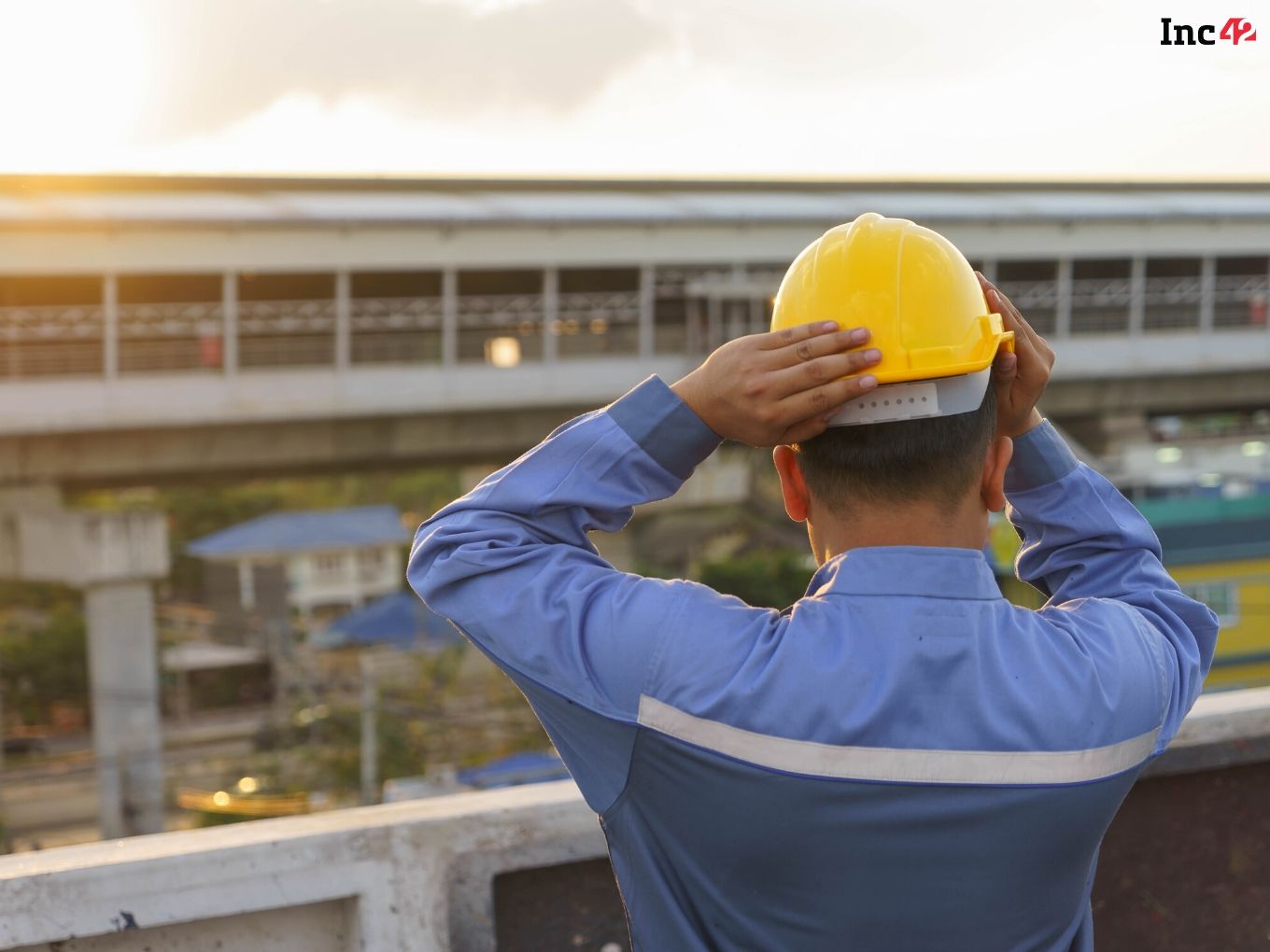 Founded in 2015, WorkIndia is working for the blue and grey collar segment in India

Currently, it caters to more than 9 Lakh distinct employers and more than 15 Mn registered job seekers, it claims

India’s job market has seen a major overhaul in the last half a decade with the rise of the app-based services in the market. With the rise of digital food delivery, hyperlocal services and grocery delivery in metros and slowly in Tier 1 cities, India is in many ways one of the world’s biggest gig economy hotspots today.

Founded in 2015, the startup claims that in less than five years, it has over 21 Mn unique app sessions per month, more than 15 Mn registered job seekers and presence in over 763 cities across India. Further, it told Inc42 that every month, the platform provides jobs to over one lakh blue-collar job seekers and gig economy workers.

“Till now, WorkIndia app has been downloaded by over 15 Mn job seekers, more than 9 Lakh distinct employers have posted jobs on the WorkIndia platform and more than 3.5 Mn unique job seekers open the app every month for job opportunities.” – Kunal Patil, founder, WorkIndia. 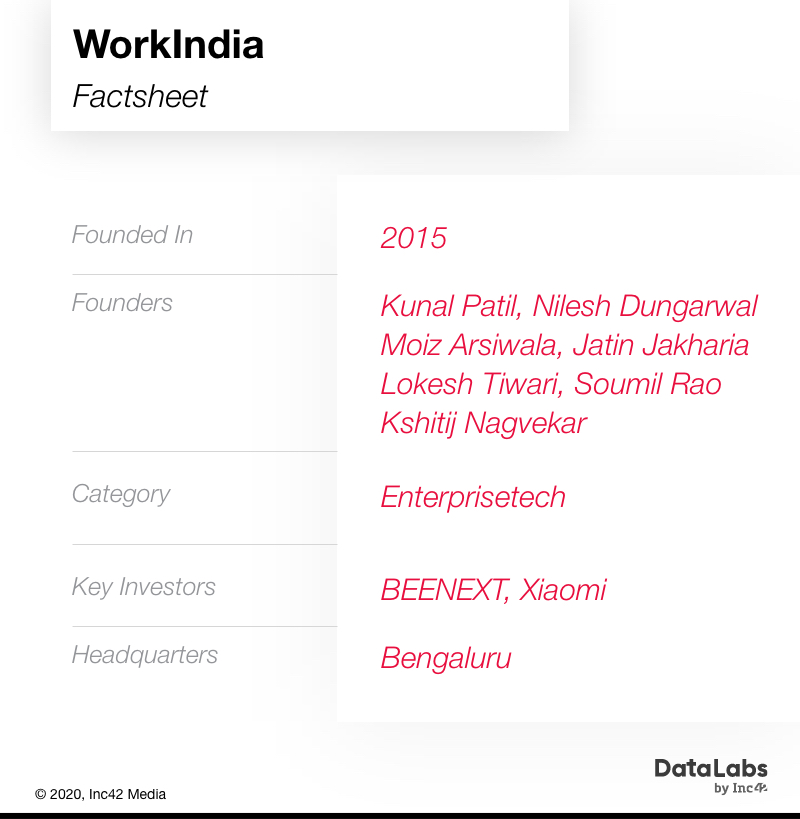 Bringing The WorkIndia Dream To Life

The blue-collar jobs’ sector comprises jobs such as drivers, security guards, on-demand services and more, and currently includes over 450 Mn people from the country. In addition to this, 92% of this sector is unorganised with less than 1% having access to formal banking services in the country and less than 5% have received any sort of formal training.

A graduate from the NYU Stern School of Business, Kunal Patil wanted to start his own venture and knew that it would be towards the blue-collar segment. While doing research on the Indian job market for the same, he met Nilesh Dungarwal.

“We both wanted to do something impactful for the blue-collar job seekers in India but it was not possible for only the two of us, so we started looking for more people who would believe in our vision and now we are a team strength of 120,” Patil told Inc42.

“The most convincing part for all cofounders was the massive opportunity in the blue-collar job segment and the fact that this particular segment doesn’t have any specific technology-based organised platform which helps them get a job,” elaborated Dungarwal.

With the aim of creating a socio-economic impact in the lives of 23.7 Cr blue-collar individuals in India, WorkIndia’s fully automated platform enables job seekers and recruiters to connect with each other with zero human intervention.

“We believe we are the only Indian tech company that enables geo-tagged, dynamic, algorithm-based automated hiring where the entire transaction terminates on the platform itself. With 125 Mn user events captured every month, we are truly ready for AI capability.” boasts Tiwari when talking about his platform.

The opportunities in the blue-collar workforce are immense but there are gaps and lag in the same due to the lack of organised hiring. These individuals are usually hired through third parties, which charge unreasonable amounts as their commission fee, or through referrals from friends or relatives.

“Our product offers a systematic approach to hiring, eliminating the presence of third-parties or referrals. One can download the app, fill his/her details and based on the location of an individual, jobs are displayed. The job seeker can then directly call the employer and fix a time to meet and they take it further from there,” Jakharia told Inc42.

Though the platform boasts of having names such as Swiggy, Ola and more as its clients, Dungarwal told Inc42 that more than 90% of the employers on the WorkIndia platform are SMEs. And since most of these firms are hiring online for the first time, the platform is offering services in a freemium model and promoting them to use the online portal for free at first.

“The intent here is to generate a level of trust in the online hiring method by giving first-time free to employers for reliable and quality hire. Once the trust is established, we take a minimum and fair charge from the second time,” added Tiwari.

WorkIndia is also trying to teach and skill the users on its platform for the jobs. With the same goal, it recently launched the ‘Learn’ section in its app to empower blue-collar workers in upskilling further. It also includes small etiquette videos for the users on topics such as ‘What should we wear in the interview?’, ‘How to introduce ourselves’ and more.

“While the white-collar segment’s behaviour is well documented, the blue-collar segment behaves very differently and very little data is available on this segment. This fact coupled with WorkIndia’s massive scale and unique insights on the segment, make it a highly exciting time to be part of what the team is building today.” – Kunal Patil, founder, WorkIndia.

With rising concerns about unemployment levels, the government has started taking more initiatives to help with the growth of employment in the country, particularly in skill development.

But while the government is making efforts, these are more towards white-collar jobs while blue and grey collar workers are neglected in the same. This is where startups such as BabaJobs, which was acquired by Quikr in 2017, GigIndia, Google Jobs, WorkIndia are creating a much-needed disruption.

WorkIndia started out as a company that would call the job seekers with jobs available around them, but soon the founders realised automation is the key to reach their goal. So they built an app to further provide ease to the users. However, building a product was another challenge for the startup.

There was a struggle to make the people aware of their product and the benefits that came with, “There was a team of over 20 people on the ground, including all seven cofounders, talking to different people about the product. We would talk to the job seekers, show them the app, take their feedback and then make necessary changes, we have done more than 350+ iteration of the product to reach the current stability and still, we are in process of the improvement” elaborated Rao.

The next struggle for WorkIndia was internal hiring. Headquartered in Mumbai till mid-2019, they were not able to hire the right people for the team and after a lot of struggles, they decided to shift base to Bengaluru. Patil commented, “Investment in young talent within the company is WorkIndia’s key focus.”

“Team WorkIndia thrives on two aspects – one, extreme innovation and two, the excitement of becoming a global leader in the blue-collar segment. In search of ambitious talent who are aligned with the above aspects of WorkIndia we shifted our base from Mumbai to Bengaluru and are now actively on the lookout for talented individuals from all over India,” Dungarwal added.

WorkIndia is in the process of tailoring the product for Tier 2 and Tier 3 cities with an addition of more languages and location preferences.

“With the increasing confidence in the product, we are targeting to reach 1 Mn job postings monthly by Q1 of 2021. We also have global aspirations with the platform and are aiming to provide a meaningful livelihood to 120 Cr blue-collar individuals,” said Dungarwal on the future of the platform.