In August 2020, Scaler Academy pivoted from the ISA model to an upfront fee in a bid to create a level playing field for students in its upskilling courses

In terms of placements, Scaler works with over 600 companies and organisations such as Google, Amazon, Netflix, Flipkart, Uber, Curefit, Microsoft and others

Edtech startups have been a big and prominent beneficiary of the new remote-first world and this is most evident in the way school-level products in the K-12 and test prep segments have grown. But beyond this watershed moment for these startups, in the non-school education segment, upskilling courses and certification products are also seeing a minor boom.

With so much uncertainty around jobs and changing work cultures, it is especially critical for working professionals and fresh graduates to invest in skilling themselves in the latest technologies, backed by startups such as Pesto Tech, Masai School, Skillshare, Josh Skills and Scaler Academy, formerly known as InterviewBit.

When it comes to skilling platforms, the core focus of the products is on the end outcome i.e job placement. So India’s upskilling startups have embraced a different kind of approach to revenue rather than charging per course or per module as is standard in edtech. Instead of a subscription-based model or charging users upfront, startups have taken the income-sharing agreement route. But as the market has evolved, many are now revisiting this — Scaler Academy, for one, believes that income-sharing agreements (ISA) are not in the interest of the learners on its platform.

Scaler cofounder Abhimanyu Saxena attributed the company’s growth so far to working professionals finding more time on their hands in a remote work environment and students looking for an alternative learning experience with colleges going virtual across the world, among others. But it was during this growth phase that the company pivoted from the ISA model for its upskilling courses on programming skills — Scaler Edge and Scaler Plus.

Until a few months backs, Sequoia-backed Scaler Academy allowed students to pay the course fees as an upfront payment of INR 1.5 Lakh-INR 3 Lakh or through an ISA, where students had to pay the course fees in monthly installments (15% of their salary for two years) only after getting a job that offers over the threshold salary specified in the agreement.

However, in August 2020, Scaler discontinued the ISA model in a bid to create a level playing field for all its students. This despite revenue growing by 180% in Q1 of FY 2020-21 compared to the same period last year. So what was the idea behind this? 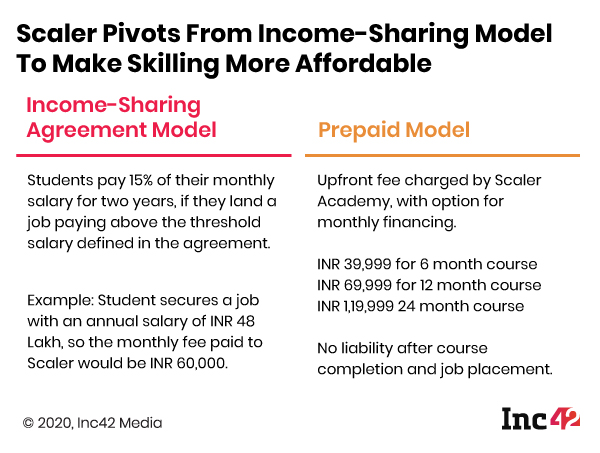 According to Saxena, under the ISA, some students ended up paying more than the actual cost of the course because they got placed at a higher earning package. Public forums such as Quora, Reddit, and even personal blogs of programmers claim ISAs work against the students, if they are naturally talented. For instance, if someone lands a job with an INR 50 Lakh annual pay package, they would have to pay around INR 8 Lakh – INR 9 Lakh over the course of two years under the ISA, while they could have purchased the product for around INR 1.5 Lakh to INR 2 Lakh through the pre-payment mode.

“We were seeing that people are having to pay much more after getting the job. We believe the prepayment model is a more sustainable and high scalable model than the ISA model,” Saxena added.

The founder noted that from a business point of view, ISAs are more profitable because the company gets a certain percentage of the student’s income and so the payout is much higher. They are also more lucrative in comparison to a course that asks for INR 10 Lakh to INR 20 Lakh fee upfront. But students could end up paying INR 10 Lakh to INR 15 Lakh in course fees under an ISA, which makes it slightly unfair for students that excel.

Even after considering risk modeling, where only 80%-90% of the people end up earning well above the threshold mark, the revenue outcome for any business under the ISA model will still be pretty good.

This is especially true after the pandemic, when remote jobs have become the trend and companies from America and Europe are looking to hire developers from less expensive markets such as India. So the ISA model would make a lot of sense for an edtech company, given that the salaries will be accounted for in dollars or euros.

The prepaid model does come with a limitation where some college students or people from economically weaker sections would not be able to afford the course fee. Scaler Academy acknowledges that and plans to introduce scholarships for such students. Currently, the company is only offering monthly financing for the course fee during the tenure of the course.

Formerly known as InterviewBit, Scaler Academy was launched in 2014 by Saxena and Anshuman Singh. Earlier this year, the company raised $20 Mn Series A funding from Sequoia India and Tiger Global. Today, the company has over 160 employees with over 1000 technology professionals working as career coaches, teaching assistants, and mentors. Despite the shift away from ISAs, Saxena claimed that the volume of applications has not been impacted — last month it received 15K applications. So far, three batches have come since ISA model was discontinued.

In terms of placements, Scaler works with over 600 companies and organisations such as Google, Amazon, Netflix, Flipkart, Uber, Curefit, Microsoft, Lido Learning, Zeta among others with a mix of large corporations and startups. 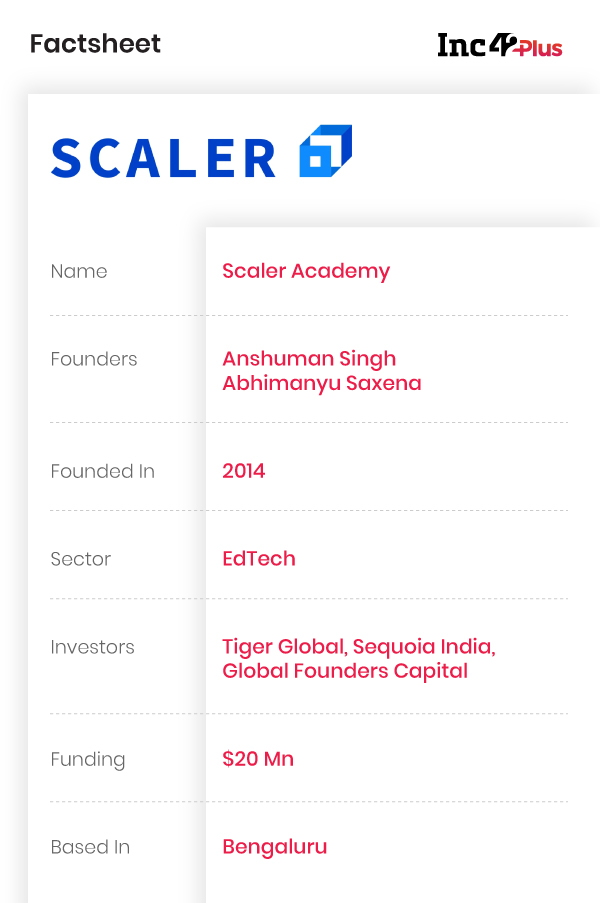 Despite the change in its approach to monetisation, not much is changing about the core teaching methodology at Scaler. As compared to other players, Scaler has considerably large batch sizes, which does raise the question of how the company’s classroom experience is different from a college classroom experience.

“We have a very strong foundational belief that live class is what delivers the real value. In our live classes taken by an industry expert, there could be around 80 to 300 students in each class,” explained Saxena.

Each student is assigned a personal mentor who conducts one-on-one sessions every two weeks to keep track of the progress. Scaler Academy currently employs 25 teachers who take the live classes and 50 other teachers who work remotely on a part-time basis.

So far, over 2000 students have enrolled for Scaler Academy courses. In terms of placements, Saxena said that for the batch which started in April 2019,  98% of students have been placed within an average salary of about INR 19 Lakh. The batch largely comprised fresh graduates under the Scaler Edge course. It is also important to note that the company has an intense selection process, accepting only 10% of the total applicants.

“After Feb 2020, there was a substantial dip in the number of companies hiring. The volumes almost got reduced by 80%, so from working with 500 companies, and suddenly we went down to 60-80 companies who were actively hiring,” said Saxena.

However, things have started to come back in the last few months, and there is a surge in the industry with companies starting to hire again.

Going forward, Scaler Academy is focusing on hiring more teachers which would in turn increase the capacity of its batches. The company plans to hire at least 50-60 more teachers over the next three months to fulfill the surge in demand. In addition to this, Scaler is also working on improving the live learning experience, which Saxena claimed was equally or more immersive than a physical classroom.