From Disruption To Leadership: Here’s How TravelKhana Became A Food-tech Major

From Disruption To Leadership: Here’s How TravelKhana Became A Food-tech Major 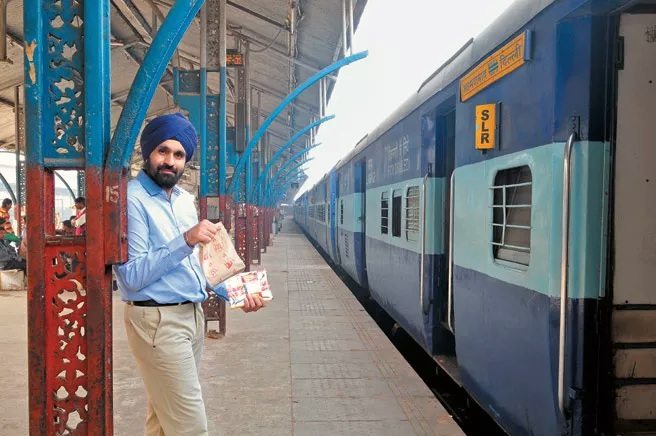 Indians have a penchant for travelling and the Railways is, by far, the most popular and accessible mode of transport in India. A lot of milestones have been achieved since the first rail journey took place in 1853. But we still shudder at the thought of eating train food. Getting quality, tasty and hygienic food (that too all at once) on Indian trains is a tall order.

Coming with nearly two decades of experience in the software and technology industry, Pushpinder Singh, an alumnus of IIT BHU and BITS Pilani, founded Travelkhana in 2012 to address this very problem. He founded the company when there were only apps or services that tended to pre-journey or post-journey requirements like booking tickets and accommodation. He says, “My work demands a lot of travelling and very often I had bad experiences when it came to food on trains.”

Since inception, the company’s sole focus has been to tackle the pervasive problem of providing fresh and quality foods to travellers anytime anywhere on all major trains routes. And it can be done in a few easy steps through its website, app or helpline number. The automated platform tracks trains in real time across India and ensures that fresh food is delivered to the passenger on time.

When the first-time entrepreneur founded Travelkhana, he knew he had a first mover advantage in this newly discovered segment. But, it also meant that Travelkhana had to overcome a lot of barriers, as there were no competitors to follow or learn from, and especially so, since the service involved entering a dreaded space that was, until then, operated solely by the government or government-backed players.

Singh conducted a small pilot project in Jaipur in early 2012 before launching Travelkhana in September that year. He says, “I had to make four trips to Jaipur to convince the vendors and get things running.” He adds, “We also did our legal groundwork in this time and found that there was no law or regulation that stops private companies from delivering food on trains.” But that, of course, didn’t stop the government-backed players from creating friction. Travelkhana has come a long way since then, as last year the Indian Railways came out with a policy framework that allows private players to deliver food on trains. In fact, earlier this year Travelkhana tied up with IRCTC to enlist its service on IRCTC’s e-catering website. But certain obstacles still remains – managing logistics according to train schedules, educating and enabling vendors, standardising food quality, acquiring new users, and making the service more inclusive.

The train food market is estimated to be worth about INR 2000 Crore annually. And, with more than 23 Mn passengers travelling every day, the Indian Railways definitely presents a huge market for the food-tech industry.

Currently, the company is busy channeling most of its energy into what Pushpinder calls a Virtual QSR model. Pushpinder says, “On seeing how effectively big QSR chains like McDonald’s and Domino’s work, I started wondering why can’t it be replicated with the standalone eateries in India. So we thought to ourselves why not systematise the whole process across the nation. For that we would need to bring consistency in food safety, taste, packaging, pricing, and type. For instance, a passenger travelling from Delhi to Bengaluru should get the same type of veg thali—in terms of price, packaging, quality, etc—at Bhopal and Kurnool. Consequently, we started working on creating a virtual QSR space, wherein we will impart training to vendors and impose standards. We are in the process of creating guidelines and norms on how to improve the quality of food and services.”

Pushpinder says, “While doing research, we came across some European data and found that most people order from the same set of food every time. We realised that the same happens with people in India too. So, now we are trying to figure a way through which we can customise the menu according to individual preferences and bring down the number of options for consumers (show relevant options only).” It goes without saying that this will be an uphill task and that big data analytics will play a major role in this aspect – be it refining menu, or deriving patterns from consumers’ behaviour, or ascertain train schedules.

In March, Travelkhana had ventured into delivering specialties. Using the Holi season as a launchpad, the company  delivered authentic delicacies made in particular places (Agra Petha, for example). After a successful launch, the company is planning to expand this operation because there’s a huge demand for regional specialties.

Travelkhana acts as a managed marketplace where restaurants are connected to travellers. Although the logistics responsibility rests on the vendor, Travelkhana uses its technology to make sure that the delivery happens on time and without any hitch. The New Delhi-based startup has a 70-strong team that includes regional managers who are stationed in different parts of India. They secure proper communication with the vendors and ensures that the food and delivery standards are maintained. Pushpinder says, “We rely on feedbacks a lot. Acting on grievances is our first priority. He adds, “Being in the service industry, our object is very clear – satisfy the customers.”

While the iOS app is due later this month, the Android app has seen over 1 lakh downloads. The company has delivered over 1.5 Mn means until now.

Travelkhana’s next phase of expansion includes food delivery services for long-distance bus passengers in cities like Bengaluru, Hyderabad, Vijaywada, Pune and Mumbai. Alongside, it also plans to test the waters in Delhi Metro and the suburban railway network of Mumbai. About suburban railway extension, Pushpinder says, “We have done a pilot. This is major expansion. We expect this to come up in the third quarter of 2016.  Primarily this is addressing the need of the people to pick up instead of traditional delivery. The pickup points are conveniently located at metro and local stations. Portion of the savings on the delivery (industry standard is Rs 60 for each delivery) can be utilized to keep the order quality high and overall cost to address the meal requirement of the daily commuter.”

The company has also partnered with startups like Oyo Rooms and Uber for cross-promotion to help its customers get proper transportation and accommodation during their journey. Travelkhana’s services are listed on websites like Coupondunia, Grabon, and Justdial.

Although Travelkhana had a first mover advantage in this segment, other companies like Mera Food Choice, Trainkhana, Yatrachef, Railtiffin, Travelzaika, Idlywada, Khanagadi have also entered the market. IRCTC itself operates a less-refined food delivery service in association with food chains like McDonald’s, KFC, Dominos, Haldiram, Bikanerwala, Nirualas, Sagar Ratna, and Pizza Hut. Discernibly, differentiating itself from the others should top the list of Travelkhana’s priorities right now.

Travelkhana generates revenue by charging a commission of about 18-20 per cent (from the vendor) on every order made through its platform. The company registered a revenue of INR 1 Cr in FY 2014-2015, while the GMV was in the range of INR 6 Cr.

Pushpinder says, “We have grown 12 times in the past three years and currently we register a month on month growth of 20%. Here onwards, our aim will be to grow thrice in the next 12 months.”

If there’s a clear winner in this whole setup, it has to be the consumers. As the e-catering segment grows, competition will increase, which in turn will result in better food and better services. As for Travelkhana, the e-catering segment promises a lot of scope for growth; especially after the Railways opened up the INR 2000 Crore market to private players. It remains to be seen how well the company capitalises on its innovations, expansions and existing networks.