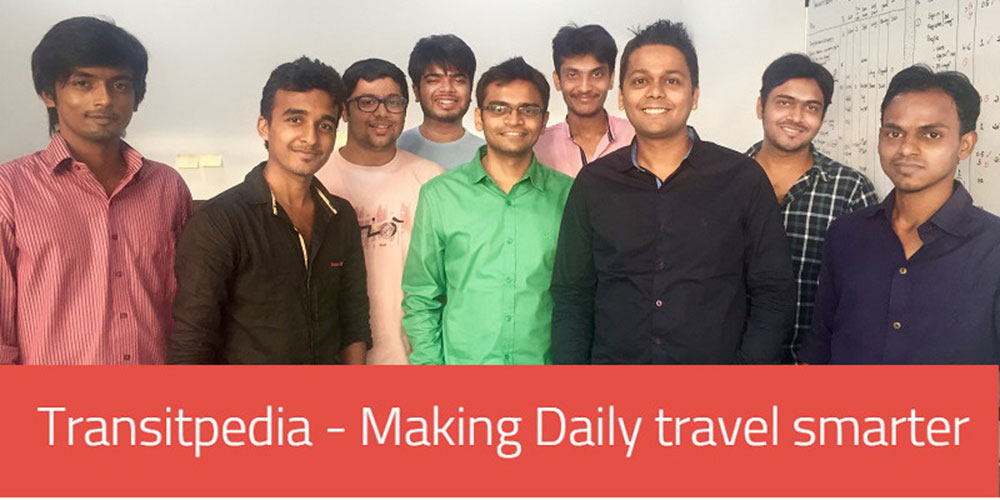 Delhi is spread across an area of 1,484 square kilometers. Travelling in this city is still a herculean task for its residents, leave aside a newcomer. The city’s public transport system is in a state of chaos and visitors find it really hard to commute, even though there are multiple modes of transportation and even startups who have tried solving the problem.

There is lack of information, and these visitors and newcomers in the city are left at the mercy of  knowledge of the next person they find nearby or the auto drivers. Most of them end up paying hefty sum of money to these auto drivers for just a 10 min ride. Questions like “Which bus goes to Lajpat Nagar?” and “Which is the nearest metro station from here?” can be commonly heard being asked by commuters who are new to the city. The conditions are same in all major cities in the country.  Fortunately, there are startups like TransitPedia that aims to ease intra-city travelling.

TransitPedia is a travel app that allows commuters to travel easily from point A to point B within a city by offering them quick access to the data they need for their commute. It was founded by Mehul Sutariya and Vaibhav Vasa in 2013.

Mehul Sutariya pursued his computer engineering from Mumbai University and his Masters in Computer Science from Georgia Institute of Technology, USA. Post that, he interned at Google and worked with Amazon for 4 years as a software engineer.

Vaibhav did his electronics engineering from Mumbai University, followed by Masters in Operations Research from Case Western, Ohio. After that, he worked with Avery Dennison (a Fortune 500 company) as a demand planning manager for about 5 years.

They both have been friends for about 15 years now and share a similar career curve. Since the age of 16, they have been extensively using public transport and were well aware of its loopholes. During their stay in USA, they were amazed to see the organized and efficient nature of the transport system. They got all the required information through an app, which made their commute well-planned and seamless, with hardly any waiting time involved at the stations. The stark gap between the public transport systems in the US and India made them realize that there is immense potential in this space to bring about a change.

They left their jobs by the end of 2013 and decided to take up TransitPedia from among a few ideas that were floating around then, majorly due to the potential impact it can have on the current state of public transport in the country as well as on the lives of millions of daily commuters. The company is based in Mumbai, where they are originally from.

“Currently, the total number of daily commuters in India is upwards of 50 Mn and this number will only increase as new public transport modes are being added/planned in different cities across India. Also, there is lack of technological intervention and smart thinking in the daily life of a commuter which when catered to, can lead to a well-organized public transportation ecosystem in India and put our current resources to best use,” said Mehul.

TransitPedia is a solution to unify public transport data across all the cities in India with a special focus on a daily Indian commuter’s needs, and provide accurate information about the schedules, alerts about service changes, cancellations and real-time information about the arrival of their bus/train/metro.

It also provides information like cost, travel duration, step by step navigation pedestrians, and even the platform number on which a particular train is going to arrive. Users can also access the schedules and timings in offline mode. They simply have to enter their source and destination and the app will offer the best route and means to reach the destination.

The company currently aggregates all the data from different public transport agencies, cleans it up, geo-tags all the stops and effectively homogenizes the data in a widely used format called GTFS (General Transit Feed Specification). Its custom algorithm performs complex computations about finding the optimized routes between two locations.

TransitPedia can be downloaded from the Google Play Store. The company did a beta launch in April 2015, where the team closely worked with a few daily commuters to understand their needs and address their feedback. It did a full launch in July and since then, the app has seeing a good organic growth so far. About 85% of its users return back within 2 days of using the app. The company is planning to register a million downloads by the end of 2016 and about 5 Mn by the end of 2017.

The app can be downloaded for free and there are no hidden charges involved; all its features can be accessed free of cost. The company is currently focusing on growing its user base and has therefore no revenue channels, as of now. However, it plans to add multiple revenue sources over the course of next year.

TransitPedia has been in a bootstrapped mode since its inception but is currently looking to raise funds and is already in talks with a few investors. “We plan to use these funds to primarily drive our growth and expansion, so that we can scale quickly and at the same time focus on building a well-organized public transportation ecosystem in India,” revealed Mehul.

Hiring was one of the biggest challenges the company faced while being set up. It took about four months to hire its first employee. However, it seems to have gotten over this issue and it currently has 10 team members.

Currently, TransitPedia has a coverage of five cities – Mumbai, Pune, Delhi, Hyderabad and Bangalore. It will be expanding its operations to Chennai, Kolkata, Ahmedabad, Jaipur, Chandigarh, Bhopal, Indore, Surat, Rajkot, Bhubaneswar and a few other cities in the next 1-2 weeks.

The Transit Ain’t Easy With All The Traffic

TransitPedia competes with city-specific apps like m-Indicator and the Delhi Metro app. When it comes to commuting apps with multiple-city coverage, there are apps like Ridlr, Zophop and Raft in the list.

m-Indicator is the intra-city travel app that offers specific information about the public transport system in Mumbai. It offers up-to-date information like fares, duration and schedule for the major transits options in the city, such as local trains, buses, taxis, and autos. It was founded in May 2010 by a company called Mobond. It also incorporated a women safety feature earlier this year. The major limitation of m-Indicator is unlike TransitPedia, it doesn’t merge the various transit options to provide the best possible route and mode of travel.

The DMRC mobile app offers a lot of useful information about Delhi metro like train timings and maps; it guides users from one station to another.

RIdlr is a public transport tracker app that lets users plan their travel using various public transports options like metro, local trains, monorail, rapid metros and buses. It offers real-time schedule and also helps users locate the nearby bus stops and metro stations. It charts out the most convenient route to a user’s destinations and also takes into account factors like roadblocks and diversions.

It’s currently available in Delhi, Bangalore, Chandigarh, Jaipur (JCTSL), Pune, Mumbai, Chennai and Ahmedabad. It was created by Birds Eye Systems – the same company that created Traffline. This app provides real-time traffic information to its users by sourcing data from the GPS systems installed in cabs and buses plying on the city road.  It helps users avoid traffic-clogged routes while travelling to their destinations.

Mumbai-based Zophop combines predictive analysis and availability of metros, trains and Uber cabs to come up with the fastest and cheapest intra-city travel option to reach one’s destination. It is currently operational in six cities and aims to add on-demand companies, autorickshaws and ridesharing companies to its portfolio.

Raft is another multi-modal transport app that helps users navigate their way within Chennai. It was launched in December last year.

With the traffic conditions worsening in all major cities with each passing day, intra-city commuting is becoming a nightmare. Apps like TransitPedia, m-Indicator and Ridlr are therefore gaining traction among people who spend a major chunk of their day on the road. Understanding the woes of these daily commuters and people who travel to new cities on a regular basis, and coming up with new features quickly to neutralize these woes is imperative for these apps to succeed.

Although Google Maps has the potential to overtake all these apps, an average Indian commuter is not aware of using the Google Maps to its full potential. Also, it’s not very effective for Indian traffic conditions as Indian public transport systems are not as well organized as in other countries. This provides these local multi-modal travel apps with an upper hand and they should take advantage of it before Google figures a way out and comes up with an Indian traffic-friendly Google Maps.

TransitPedia was among the final 12 Startups That Made It To StartupPulse Mumbai 2.0 Edition!!