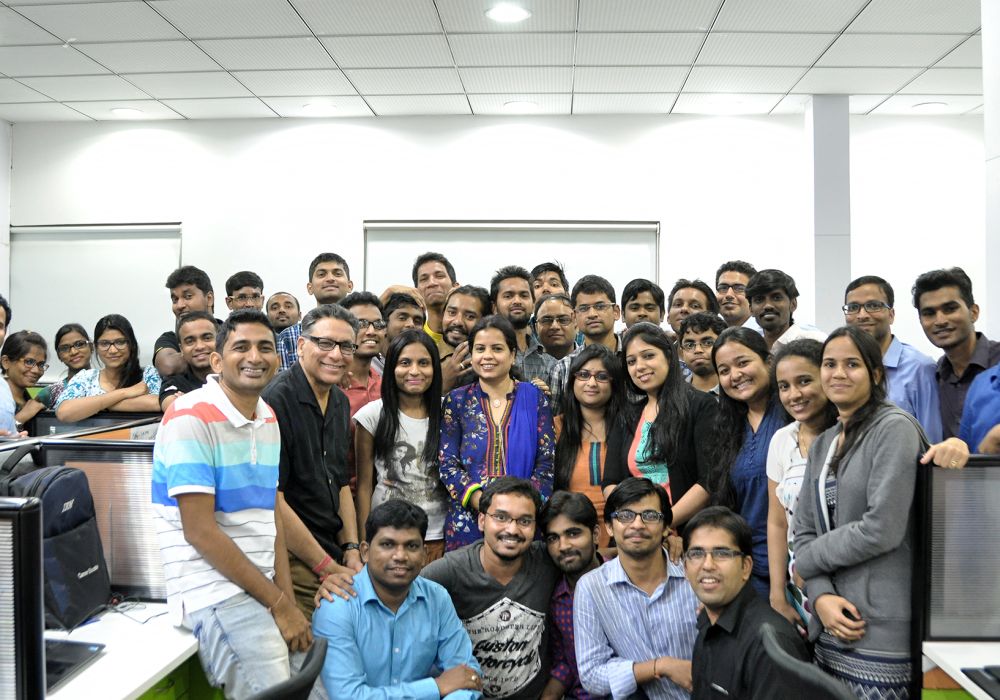 According to a recent report released by Cornell University, INSEAD and World Intellectual Property Organisation (WIPO) India stood at a respectable number 66 (up 16 points from last year’s 81) on the Global Innovation Index.

Two key factors were responsible for this leap – digitisation of the economy across sectors, especially ICT and increase in high quality colleges and universities. At the heart of it, edtech startups are the perfect combination of the advantages afforded by incredible developments done for mobile-first India and newer ways of imparting quality education. Both children and professionals alike who are looking to upscale their existing skill sets or branch out into fields of interest are benefactors.

Adding to this is a third, slightly more alarming factor – the increasing dependence on Artificial Intelligence (AI) and Machine Learning leading to the creation of robots and drones for menial jobs and labour-intensive tasks. It is estimated that robots will replace about 6.4 Lakh low-skilled jobs in the IT sector by 2021 in India alone.

Combining all these pain points together allowed for a one-stop solution provided by online boot camp edtech platform AcadGild.

“Participants are very passive in most e-learning courses,” says Vikalp Jain who is a co-founder of the one-year-old startup, along with Silicon Valley-based serial entrepreneur, Vinod Dham. “Currently, there is no way for users to actively participate in what they are traditionally learning and apply it to attain a job skill,” he adds.

AcadGild, a gamified platform has a suite of professional certificate courses that aim to teach hands-on, job ready software programming and business skills, globally, in small batches of 8 to 10 to both students and working professionals. Believing it essential to create an ecosystem for skill development where higher education is a basic human right are two of the most important factors driving the platform forward.

Acadgild is the brainchild of Vikalp Jain, an IIT Bombay graduate and Vinod Dham the inventor of the Pentium chip and a serial entrepreneur in his own right. Krishnan Ganesh of GrowthStory too has been instrumental in laying the startup’s foundation and building scale when he introduced the co-founders to their future investors.

Dham had displayed foresight back in 2007 when the BBC had done a story on TutorVista on which he was an expert panelist. He had claimed in the video interview that before AI and robotics had become as mainstream as they are today, professionals honing tech skills are the next best resource to be tapped in India, after outsourcing.

Vikalp Jain studied B.Tech at IIT-B and then went on to perform other roles in the IT sector. Most notable among these were the implementation of mcommerce platform at Qwest. After that, he co-founded his own startup Movzo. In his own words, “It was an AI and Big Data analysis platform based on Bollywood sentiment.” Eventually, despite having found significant traction, the startup couldn’t generate revenue and had to shut down.

Vikalp then moved on from entertainment and Bollywood to edtech, utilising the full extent of his passion. He co-founded Flipclass and worked as the CTO at the platform which is aimed primarily at K-12 students.

His responsibilities at the startup included setting up the entire tech, tutor and operations teams as well as leading the development of next generation learning tools. “I built LeLoMo, a customised, AI-based education system,” summarises Vikalp, of his stint with Flipclass.

When Vikalp went to Silicon Valley in 2014, he met and bonded with Vinod Dham, who was scouting for a viable proposal in the edtech space around then. The rest, as they say, is history and Acadgild was formed in January 2015.

The team of 53 that runs AcadGild at the moment is based out of Bengaluru. 20 of the 53 members are full time online support staff that provide round-the-clock assistance to the students enrolled in the various courses.

AcadGild boasts of a rigorous, boot camp-like approach when it comes to training its participants.

Keeping its focus on the IT sector in the three metros where the sector is most popular — Delhi NCR, Mumbai and Bengaluru — it first launched with Android programming courses, particularly Android Development, that still remains one of the most popular courses on the platform. Within three months of launching the Android Development course, the company came up with a few more courses such as Full Stack, Big Data, Front End Web Development, Machine Learning with R, Cloud Computing, Spark, Core Java, and Digital Marketing among others.

“The boot camp is intensive, online and essentially makes people learn to build apps. A demonstrable skill leading to jobs,” says Vikalp, talking about the core USP of the startup.

Based on the mission of “Learn, Do, Earn,” the startup aims to offer intensive and affordable courses that engage, inform and ultimately empower the participants to learn or refresh their skills and leverage their knowledge into better, more gainful employment. Each of these exhaustive courses can last anywhere between logging in a minimum of 240 hours to a full 12 weeks of lectures and assignments.

One of the core aspects of AcadGild is its use of working professionals as ‘mentors’ who conduct online sessions on the given syllabus. With a curated selection of mentors from esteemed organisations like Oracle, Cognizant, BookMyShow among others, AcadGild claims to give real-time, applicable knowledge to its participants that is essentially different from the textbook knowledge to be found in most educational institutions in the country.

Each of the courses on AcadGild are led in small batches with one-on-one instruction being a key priority. Mentors such as Pradeep Mishra of Ma Foi Analytics and Satyrabrata Pradhan from Bank of America are passionate, knowledgeable individuals who teach students more than the basics; helping them become ‘creators of tomorrow.’ Then there is the 24×7 online support staff that helps in answering queries of the students on any given subject and helping them with assignments.

The live online sessions are recorded by the mentors so they can be viewed by the students at their convenience and assignments are given out based on these interactive sessions.

These assignments are then graded based on a gamification system. Each assignment carries with it a certain number of points and the points accrued at the end of the course or level studied determines the grade quality achieved by the participant. Currently there are three certificates given out – Platinum (85% and above), Gold (75% and above), and Silver (65% and above).

“Students are now excited to work on their assignments,” says Vikalp. “They want to earn more points. And the general quality of coursework too has improved,” he adds.

One of the more interesting features of the platform are the newly launched ‘Job-Ready courses’ where the applicants put in hardcore training, coding, or in the case of wanting to become a marketing analyst or data scientist, ML learning and data-crunching, and on completion are guaranteed a placement by the website’s platform’s placement cell. These courses require a minimum of 500 hours of intensive course-work.

“We are already receiving placement requirements from five tech services companies and are confident of 100% placement with these courses,” Vikalp says. These courses are particularly useful for engineering graduates looking to add to their skill set and on the lookout for a job in the field of their choosing.

Currently, the placement-courses are being conducted in Android and Front End Web Development programming.

AcadGild works on a subscription-based model with the courses ranging anywhere between INR 15,000-INR 70,000 for the more intensive courses, e.g. the Job-Guarantee courses. “All our customers are paid for, and the mentors get paid for the hours they put in on a per hour basis. So we are profitable at a unit economics level,” shares Vikalp.

Due to steady revenue and the demand-supply ratio in favour of the startup, the startup claims to show 30% Month-on-Month growth so far.

Competition-wise, there are established platforms like Coursera, Khan Academy that also offer in-depth programming and development courses. In startups, DoSelect’s ‘DoSelect for Developers’ is a recently launched platform aimed at getting developers industry-ready by using a recommendation engine studying user profiles on GitHub, StackOverflow and the resident platform. The engine then hands out problems for the users to solve helping them level up. The move is primarily to get engineering graduates ready for mobile app development jobs.

CodeHack is also another competitor in the online software professional training course vertical.

When asked on what sets the platform apart from its competition he says, “The boot camp-like structure of Acadgild allows participants to learn to build apps alongside learning theory. It is putting theory to practice turning the end result into a demonstrable skill, which lead to job offers in STEM fields.”

Bolstered by the success of its platform in India, AcadGild looked west to target the biggest market for software developers with core IT skills – the US. They went ahead and launched Front End web development and Big Data stack for the US users. As Vikalp shares, “About 20% of our 700 active participants come from the US at the moment.”

According to Vikalp, 60-65% of these active participants are working professionals, looking to upscale, a small number (20-25%) want to find jobs and the rest are students.

While there are existing online courses like Bloc.io and General Assembly (an offline boot camp), which provide the kind of content that AcadGild provides, Vikalp claims that the standard of learning given for the price is extremely competitive. “Platforms charge 2x-3x more than us for the same kind of course. We charge $600,” he says. In comparison, one of the startup’s direct competior Blog.IO charges $5000 for the same Front End Web Development course for Java Script programming.

From The Mouths Of Babes To The Future

AcadGild also introduced a new vertical aimed at children. A special summer camp was launched in 2015 aimed at promoting software-programming awareness among children.

ARDUINO and Android for Kids are the two most popular courses opted by them, although AcadGild also runs a number of other courses for children, namely — Android Development, Raspberry Pi, Arduino, Python, Robotics and Unity 2D.

After the success of the first edition, Summer Camp 2016 took it a step further. It ran a contest for the 400 enrolled children to build an app, and the winner – VPledge developed by 13-year old Priyal Jain and Prateek Mahesh – was launched on the Google Play Store in June 2016.

As design is an integral next step in developing an app, AcadGild is making further inroads by also planning to launch UI/UX-centric courses. Two of the mentors it has roped in for the same are Sebastian Jacob, co-founder of Pichkaari and Sachin, a freelance designer. With keeping a core focus on IT and IT-related areas, AcadGild aims to be a market leader in the boot camp professional training course vertical in the coming five years.

The competition is fierce but the potential for growing in the space is also substantial. With 5 Mn graduates emerging from engineering institutes in India who are still considered less than industry-ready by corporates and ‘upskilling’ being the new name of the game for industry professionals, it is no wonder that startups such as AcadGild, DoSelect For Developers, CodeHack and others are thriving and showing significant transaction. And, in short, have become viable opportunities for investors and users alike.