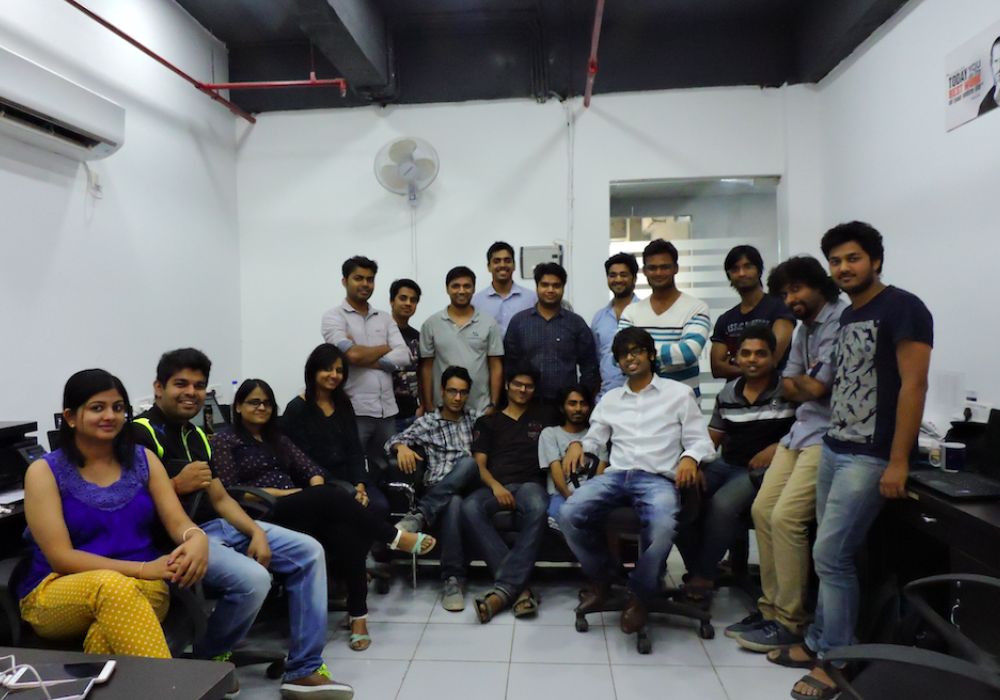 “Where there’s a will there lies a way”

It seems, Angam Parashar, Ankit Narayan Singh and Muktabh Srivastava, did not  leave any stone unturned to prove this adage.

When the trio started their entrepreneurial stint in January 2014, they had no idea what the future held for them. What started as just a simple idea to resurface old content in a contextual manner for publishers, later turned to a dive into the complexities of deep learning and AI.

Now, after two years of starting their Gurugram-based venture ParallelDots, has been featured alongside top deep learning startups by Denny Britz in his blog. The company was also adjudged as the top three startups in India at the Seedstars 2014 event. Not only this, Muktabh is one of the most viewed authors on topics like deep learning and artificial intelligence on Quora globally and was also one of the speakers at The Fifth Elephant conference – 2015, India’s largest big-data and machine learning conference, held at Bengaluru.

The Beginning: From A Simple Tech Startup To A Deep Learning Platform

Before starting ParallelDots, Angam was working as a consultant at Opera Solutions, a boutique big-data consulting firm and Ankit was working in Australia. Being close batch mates and even wing mates at IIT Kharagpur, their friendship had withstood the test of time and distance – a fact that is reflected when Ankit left his cushy job, came back to India to support Angam with his endeavour.

While they were brainstorming on initial ideas, they also started looking for a tech professional to join them. Their search ended with Muktabh, who was Angam’s colleague at Opera Solutions. A BITS Pilani graduate, he was a data scientist there and finally joined ParallelDots as the third co-founder.

The journey began with ParallelDot’s selection in T-Labs’ fifth batch in January 2014. During the inception, they worked with online publishers to create timelines for any event using their archived content. For instance, if it were a news website that was covering the ‘US Elections 2016,’ they could quickly gather all important content from the past in a timeline to give a fully immersive, comprehensive backstory.

They started with this idea and went on to a few pivots later on, however, they soon realised that to create accurate timelines they would need a really powerful technology. That was the time they started working on deep learning. They successfully built the technology that could create the timelines accurately. However, as they talked to more and more people, they realised the need of such technology in other domains, especially within enterprises.

“This was 2014, when the majority didn’t even know what deep learning was. So, we were one of the earliest companies who actually started using it.”

Since then, the ParallelDots trio have come a long way. They have developed a lot of technology based on the feedback they collected from the market. They have also changed their business models a couple of times as an experiment, to figure out the right thing.

“However, we are still in stealth mode – the way I see it is that we still tweak our business model just to see what is working better and what isn’t,” said Angam.

Currently working with a team of 25, the company offers a complete stack of intelligent text analytics APIs to enterprises. These APIs can now offer different use cases depending upon the need of the enterprise or publisher.

One use case is in the form of a recommendation engine. As explained by Angam, “Consider these two sentences – ‘Sachin is the greatest batsman’ and the other, ‘Tendulkar is the finest cricketer.’ One can see that here no two words are common but still they are the same sentence. Now imagine, if we can build a search engine on top of this technology and use it to recommend contextual content, ads, etc. The results are independent of the words used, independent of the tags – they are purely contextual.”

Next, some clients use their technology to extract entities that are present in the article to understand what it talks about, while a few use it for extremely accurate sentiment analysis technology. “Say there are two sentences – ‘I have a crush on Virat Kohli’ and ‘Virat Kohli crushed my hopes’. Now, the latter is a completely negative sentence but the verb that is determining the sentiment happens to be the same – crush. Our algorithm understands the meaning of the sentence – it can crack all this pretty easily,” simplified Angam.

Furthermore, using all their deep Learning APIs, they have built a media monitoring tool too. As stated by Angam, “We crawl millions of sources across the web, Twitter, Facebook, etc. to monitor different events, keywords, hashtags, etc. We also have built an anomaly detection algorithm that automatically raises alerts whenever there’s an anomaly in the event that our customer is tracking.”

The team also provides custom solutions to enterprises who want to train deep learning models on their proprietary dataset. Angam mentioned, “We have a very strong presence on relevant communities like Quora, Reddit, Hacker News, etc. This helps us pull enterprises across the globe who are trying to utilize the power of machine learning on their existing data”.

In the outside world, from a technology standpoint, platforms like IBM Softlayer, AWS, etc. are themselves trying to build such smart APIs within their cloud platforms.

However, as stated by Angam, it is hard for them to build smart APIs that can be used as a plug-and-play tool. Every enterprise has its own dataset which is different than the others. Given the fact that all machine learning models work best on the dataset that they are trained, pre-existing models cannot give the best results on different datasets, unless the models are explicitly trained on them. Moreover, enterprise delivery often requires a lot of customisation and continuous support and the demand of such solutions within enterprises is growing globally.

“The value proposition is simple – we provide better technology without any development effort thus saving money and time for our customers. There are a few existing media monitoring solutions that are used by enterprises such as Brandwatch, Keyhole, etc. which provide tools to track any event/keyword across the web. However, our proprietary algorithms have allowed us to show insights which are not available within existing solutions. Technology like sentiment analysis, intent analysis, contextual classifiers, troll detection are some of the features we have built for our product.”

When asked about the challenges being faced in the initial phase, Angam stated talent crunch was the prime one. “This entire field is very new. It’s hard to find good talent at the price that we can manage. We overcame this challenge by offering the best quality work to our team which isn’t available anywhere else in the market,” said Angam.

At present, Parallel Dot’s target audience includes enterprises who want to leverage the power of AI to improve their processes. These enterprises have heaps of data. While some form of analytics is in place due to the ongoing revolution in data analytics for the past decade, many hidden insights can only be harnessed using AI. “And as AI is becoming mainstream, we have found enterprises to be extremely receptive to this new technology,” he added.

ParallelDot’s clientele spreads across geographies and belongs to different sectors – such as finance, news and social media, enterprise, etc. owing to diverse use-cases of their technology.

In the next 6-12 months, they want to continue building world-class technology as they explore to go deeper into AI. “We will continue innovating the existing products and building new products,” said Angam.

According to Angam, the AI present in the industry is still very nascent. It is only able to perform tasks that would take a human less than a second to complete. For example, categorising an image, detecting objects in a photo, figuring out a sentiment in a text, etc.

The major advantage that AI has is that it can perform such tasks across millions of files in just minutes. This is why ever-increasing data is propelling the need for smarter AI. And this need is only going to increase in the future and where predictive, intuitive solutions provided by companies such as ParallelDots are the need of the hour.