This 19 Year-Old’s Parents Took 9 Years To Identify His Disorder, His App Could Have Done It In 45 Secs

This 19 Year-Old’s Parents Took 9 Years To Identify His Disorder, His App Could Have Done It In 45 Secs 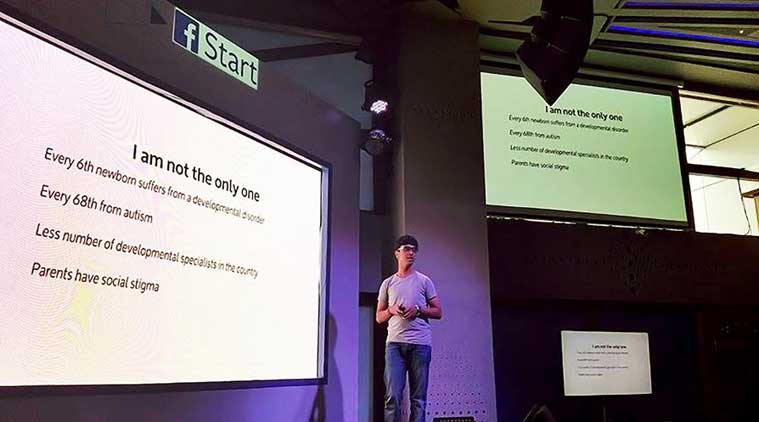 While Aamir Khan starrer ‘Taare Zameen Par’ lighted up movie screens to create awareness about dyslexia, a most-prevalent learning disorder in children, not much has been done to help parents detect such disorders in their children. Fact is, in India, around 13 to 14 percent of school-going children still suffer from one or the other kind of learning disability and developmental disorder. It took a teenager, suffering from a developmental disorder himself, to employ technology in addressing developmental issues of children.

Bhopal-based Harsh Songra had always been a bright student in school. However, when he had failed in one subject in the sixth grade, teachers at school suggested his parents to enroll him at a school specifically meant for disabled children. His parents were left distraught. Later Harsh was diagnosed with Dyspraxia, a developmental disorder. But the incident would be stuck in young Harsh’s mind forever.

At the young age of 16, Harsh learnt Android programming and had developed Studiebay, an online platform dedicated to coaching classes listing. However, he wanted to build something which would help parents screen developmental disorders in their children. Coupling his interest in technology with his personal experience, Harsh built the My Child app along with Aafreen Ansari and Shreya Shrivastava. With the help of this app, parents can detect developmental disorders in their child within a matter of 45 seconds which otherwise took 9 years for Harsh’s parents to realise.

In August, Harsh captured the world’s attention when Facebook COO Sheryl Sandberg posted about the Indian startup’s enrollment in the FbStart Program.

Essentially, the My Child app helps parents screen and detect developmental disabilities in their children. By providing a few inputs, a parent, with children between the ages of 11 and 24 months, can decipher if her/his child is suffering from any developmental or learning disorder. MyChild provides parents advice based on answers of the questionnaire. Once the inputs about the child are uploaded, the app provides the output in the form of a suggestion.

Once downloaded, a parent will need to answer physical details of the child like weight, height, and the age of the child, followed by specific details related to the child’s growth over the years. The app also looks out for information such as a child’s ability to smile and speak mono-syllables and double syllables, followed by words and sentences.

The app provides suggestions based on theoretical research from several books. However, Harsh was quick to add that it doesn’t claim to be 100% accurate and it should be used as a reference only.

Built on backend comprising of Java and Parse – the development platform owned by Facebook – the app functions on procedure which is a mixture between analytics and comparison.

While the market is flooded with multiple online platforms and mobile applications for child care, in Harsh’s opinion, none comes close to doing what My Child has set out to do.

As of now, My Child does not face any direct competition from anyone in the domestic market.

As of now, the startup is not generating any revenue. However, Harsh ensures that in the future, avenues like brand acquisition and affiliate selling will be included in the business model.

Since its launch in January, the app has gained traction all over the world. The 10-member team started a grueling regime of working on the app since May this year. Till date, the app has been downloaded 7000 times by parents in 100 different countries.

The startup is currently in the middle of raising its first round of funding.

The My Child app aims to become a one-stop solution for queries all parents have regarding their children and their mental health. Harsh wants his app to be known as a companion for parents.

The company is also planning upgrades which will help guide the mother during pregnancy to mitigate the chances of unexpected delivery which increases the chances of disorders.

“We have a roadmap ready. In the future, the app will evolve as a perfect guide for parents telling them what are the dos and don’ts of bringing up a healthy child. We will also develop a community in the future to help parents to communicate with other parents/doctors through the app, and discuss their problems. We feel that we could actually bring a change in the world and make it better”, says Harsh.

However, Harsh categorically adds that My Child is in no way a substitute for the doctor. He says that after using My Child many parents have confessed that it has helped clear confusion over the doctor’s diagnosis.

The biggest challenge that lies ahead of My Child and its young CEO is to change the mindset of parents and the society at large. While the app intends to offer accurate information based on analytics and comparison, which would help parents detect a certain disorder in their child, many might question its accuracy as opposed to detection and advice given by a licensed medical practitioner or psychologist.

Apart from that, being at its nascent stage, the startup continues to face challenges like finding dedicated employees. When it comes to creating awareness and erasing social stigma, India still has a long way to go. That Harsh himself is afflicted with a developmental disorder and has managed to address it would strike a chord with parents, who refuse to acknowledge such disorders in their children and live in denial. It now remains to be seen how My Child rewrites a narrative chequered with ignorance and denial.