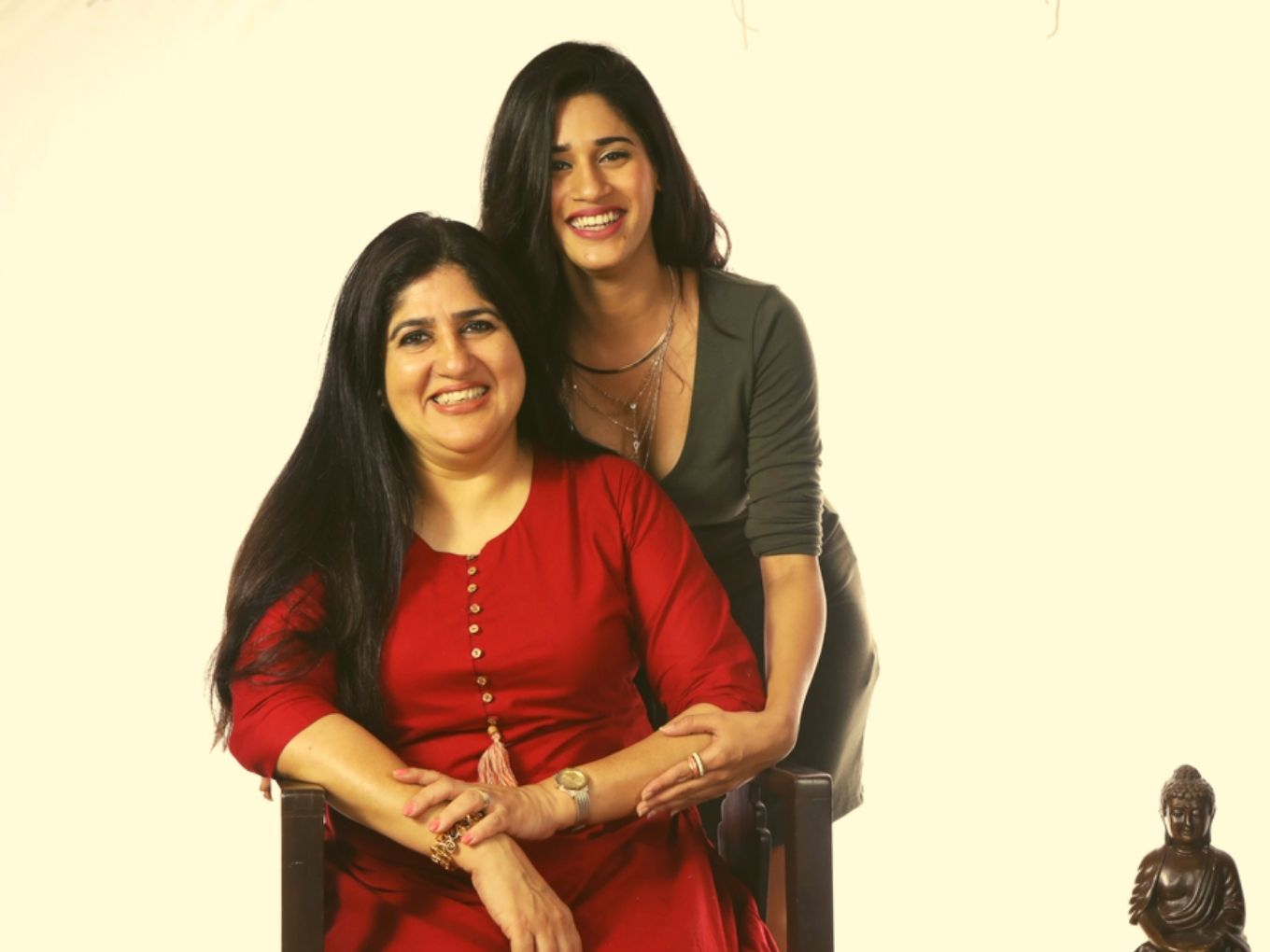 Trijog said that it took about 28 days to align with the pandemic times, and go online completely

In the span of six years, the company has witnessed a revenue grown 10X, and has catered to over 26,700 users and touched the lives of 7 Mn people

In the foreseeable future, Trijog plans to double its numbers by FY21, along with its plans for international expansion, fundraising and more

Amid these stressful times, the mental health landscape, which has been predominantly dominated by counselling centres and specialist clinics, has taken a turn. Just like retail brands and outlets, mental health counselling has moved online to stretch the reach of startups operating in this space. As evidenced by the growth witnessed by mental health startups, mental wellness seems to be on the radar for most Indians. From individuals to school going kids, teens, corporate professionals, influencers, entrepreneurs and celebrities, are now looking to seek professional help at their ease and convenience. The stigma associated around mental health is slowly getting eliminated from the equation.

While many industry experts and psychologists believe that technology may not always replace face-to-face interaction when it comes to mental wellness and serious disorders, in recent times, it has increased the convenience, choice and flexibility for individuals looking for respite with the Covid-19 crisis. In fact, the global conversation around mental health and loneliness in light of the lockdowns around the world have also erased the stigma factor to a large extent.

While mental health startups such as Wysa, YourDOST, Mindhouse and others have seen rapid adoption, the startups that worked in the physical world had to rethink operations first, before thinking about catering to the new audience.

For mental wellness startup Trijog which was running camps and clinics for individuals, corporates and institutions, it was time to switch its business to 100% online. And the Mumbai-based startup managed to do this in a matter of four weeks to completely move to virtual counselling. Prior to the lockdown phase, the company earned 30% of its business through online counselling and 70% through visits to its centres, training institutes and camps. It had to go through a complete restructuring, and it took 28 days for the company to align with the pandemic times and go online.

“To ensure high quality experience for our users, we had to increase our training support for our in-house team, alongside enhancing the tech capabilities. While the app and the online tools took care of the front end, we made sure that our back end was strong and had to redesign the entire system of operations,” said cofounder Arushi Sethi, who is also a board member at the World Federation For Mental Health (WFMH).

Founded in 2015 by mother-daughter duo Anureet Sethi and Arushi Sethi, Trijog is backed by GHP Group led by Yugank Sharma. Pre-Covid, only its webinars and online therapy sessions were conducted virtually, but after the pandemic, the company had to realign everything, and now it claimed to have reached a phase where it can accommodate both online and offline services as per patients convenience, including in-centre counseling, corporate wellness, institutional wellness, trainings, campaigns and others. 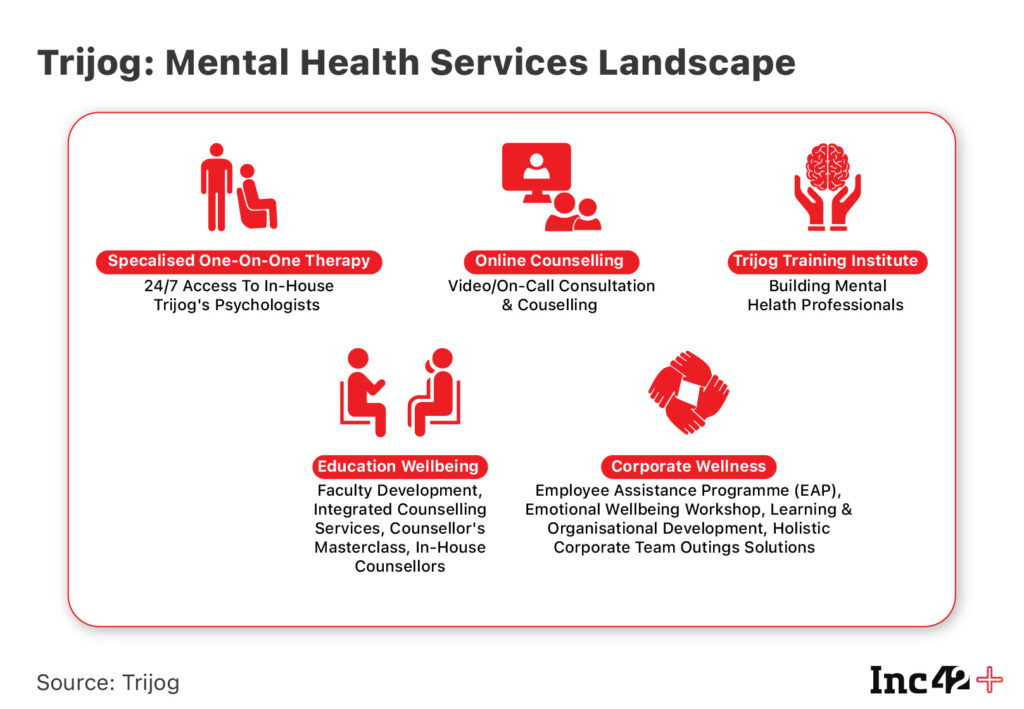 Today, Trijog earns revenue from multiple touch points across each of its five revenue verticals, and its costs for individuals range from INR 1500 to INR 3000. In the corporate segment, its clients include Unilever, WeWork, TATA, OML, Soho House, Euro School, Oberoi International School, Emotion Matter Foundation and World Federation For Mental Health among others.

For Trijog, the primary challenge is not outcome related since it has trained professionals to handle that aspect, however the company has to put in efforts to bring individuals to the point of mental healthcare. In India, the market is still in the nascent stage, and a lot of awareness and community driven initiatives is said to fuel the growth. Trijog said that its campaigns and outreach programmes have helped them in their conversions. For instance, one such programme during the recent lockdown was the nationwide pro bono initiative, where it offered free phone counselling sessions for a duration of 20 minutes per person.

In March and April, because of this campaign Trijog was able to touch the lives of over 500 users. Besides setting up back end internal ERP tech and quality assurance for the wing department or vertical, Trijog had to digitise everything, including data management system, which used to be stored offline and online (cloud migration), patients counselling session reporting and internal training support and comply with data compliance, backend for client management and customer satisfaction through mobile app, all developed in house, which is headed by Sahej Sethi, director, head business practice and marketing at Trijog.

For each stage, Trijog had to solve a separate set of challenges. For instance, its coaches and psychologists, who were familiar with one-on-one sessions in physical clinics, had to go through extensive training to ensure quality and outcomes in the online environment.

“We set up a complete web-based interface which gave students the details of the training — schedule, subject and details of classes on per-class and subscription basis,” shared Arushi, pointing at the shift to online classes. Currently, it uses Zoom to conduct these sessions (one-on-one as well as batches), but the cofounder said that in the coming days the company plans to set up its own video platform for experts and learners.

In an experimentation mode, Arushi claims that the way things are going at the moment and how Covid-19 changed their business overnight, Trijog has decided to redesign its processes every six months, where it plans to amalgamate both conventional intervention and tech to offer holistic mental health services for the masses. 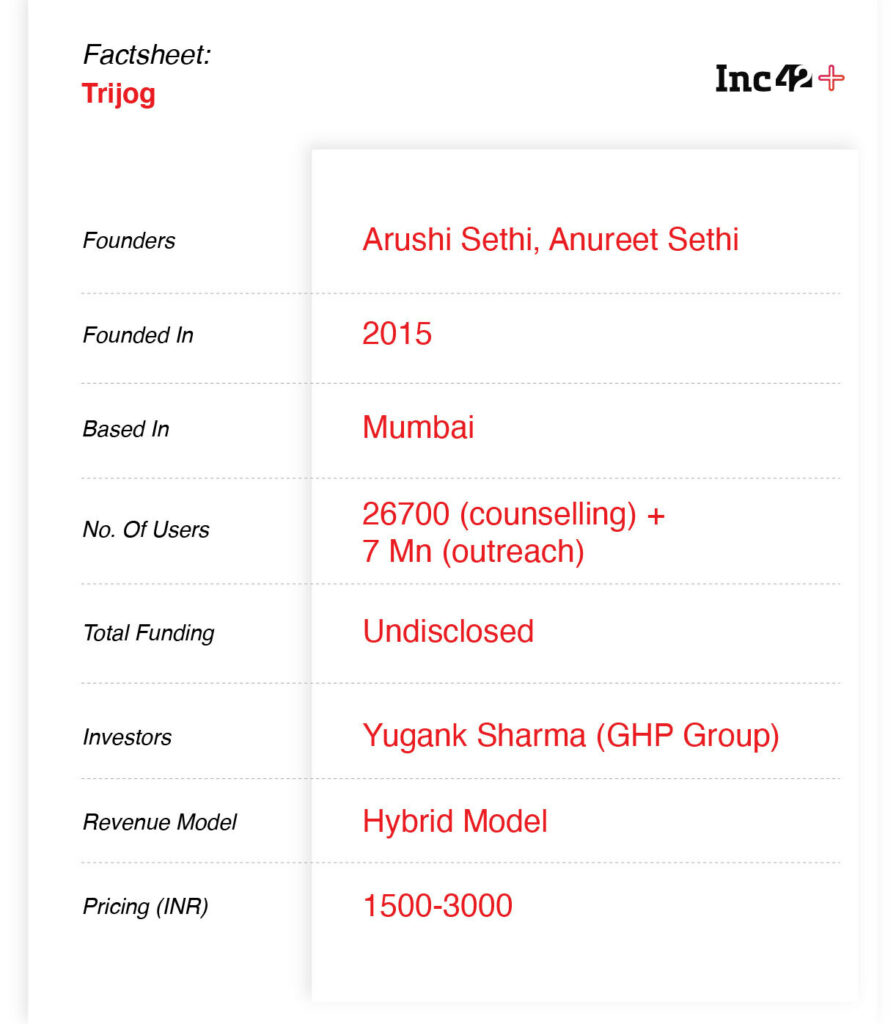 Going Back The Omnichannel Way

Initially, Trijog started its journey with a four member team, and was catering to only two verticals, including one-on-one therapy sessions and corporate mental wellness. It had about 240 clients through both these verticals. Last year, after the addition of schools and online therapy sessions, the company added 5K new users and since then claims to have touched lives of close to 7 Mn people through its online campaigns and reach. Today, it has a team of 52 employees, Trijog has catered to over 26,700 users across verticals.

Going forward, in the next six months, Trijog is looking to raise its next round of funding. The cofounder told Inc42 that it plans to double its team size by 2021, along with its plans to expand its services internationally, and running national and global awareness campaigns. Also, in its newly launched Trijog Training Institute, the company envisions certifying at least 500 practitioners, who will help grow its team as well as service India’s burgeoning mental health landscape.

According to FutureWise Research, the global mental health market is expected to touch $4.5 Bn by 2027, growing at a compound annual growth rate of over 13%. The report further stated that the blend of advanced behavioural software solutions with the conventional behavioural health solutions is expected to enhance effectiveness and productivity, thereby fueling the growth of the mental health industry.

From September 1, 2020 onwards, Trijog will also be resuming its offline operations to go for a complete hybrid model.

“At the end of the day, technology or online therapy has its limitations, and will not be able to replace the human interface. For critical cases, behaviour therapy is a must. We can not forget about that market,” Arushi added.