This day is remembered for the completion of the ‘Human Genome Project’ (HGP) – an international effort to sequence the 3 Bn DNA letters in the human genome – which opened the doors to numerous opportunities in the space of healthcare, agriculture, animal sciences, environmental protection, bio-fuel, and so on.

For those who are unfamiliar with the term, a genome is an organism’s complete set of deoxyribonucleic acid (DNA), a chemical compound that contains the genetic instructions needed to develop and direct the activities of every organism.

In simple terms, it is the language of life for all living beings.

Sam Santhosh, an IIM Kolkata alumni and then owner of IT firm Calasoft (sold in 2009), found this as an opportunity to step into the adventure of genome sequencing and data analysis. After spending a few years gathering knowledge on the subject, Sam established SciGenom Inc., in 2010, in Kochi, Kerala.

SciGenom was set up to provide genomics services and offerings across various sectors including human, agriculture, microbial, and animals. With growing demand in genomic services for human samples, SciGenome spun off its human genomics division MedGenome into an independent entity in 2013.

“When we started with SciGenome, it was the time when DNA sequencing technology was growing in leaps and bounds, reducing sequencing costs while increasing processing speed. For example, sequencing the first human genome took 10 years and cost about $3 Bn, while now we are at a stage talking about a $1,000 genome sequencing in less than two weeks.”

Now, after three years of inception, the company is known for providing genomic solutions in cancer immunotherapy. Its unique access to genomics data with clinical and phenotypic (the physical and psychological characteristics of an organism from both genetics and environment) data provides insights into complex diseases at the genetic and molecular level, to facilitate research in personalised healthcare.

Based out of Bengaluru, the company has, to date, raised $24 Mn funding, and is backed by investors such as Emerge Ventures and Sequoia India.

MedGenome was initially incubated as the human genomics division of SciGenome in Kerala itself. The aim was to help clinicians globally adopt precision medicine in their practice while diagnosing diabetes, cancer, and cardiovascular diseases. Another goal was to help researchers in continuing their experiments and studies on human genome sequencing.

In 2013, MedGenome restructured and its headquarters were shifted to Bengaluru to set up an NGS (Next Generation Sequencing) lab – which claimed to be India’s only lab to possess NGS technology machines, such as Illumina’s Hiseq X 10, 4000, and 2500.

iIlumina is an American company which provides advanced technology products/machines to help decode human genomes. For instance, a blood sample collected from a patient having cancer is processed through these machines to get deeper insights on his curable state and suggestive medication.

Since then, the MedGenome labs have been set up in other South Asian markets and recently in Chennai too. In addition, a CLIA/CAP certified lab was also set up in California. The company also claims to be the only genomics firm to conduct a very accurate non-invasive prenatal test facility in India to predict the risk of chromosomal disorders in foetuses.

Currently operating with over 320 employees, the company offers 300 genetic tests across oncology, cardiology, ophthalmology, neurology, and nephrology. It works with over 10 research collaborators across the country and has a network of over 4,00 hospitals for diagnostics. For instance, MedGenome is working with theTata Memorial for Cancer, Mohan’s Diabetic Centre for Diabetes, etc.

It has also earned the distinction of being the NGS lab with the highest throughput – the number of sequencing done in a period of time – in Southeast Asia. Furthermore, it is also a founding partner for the GenomeAsia 100K consortium, with an objective of sequencing 100,000 genomes from the region to identify genetic insights that enable drug discovery and exploratory research.

A Platform Offering Solutions For Clinicians And Researchers

First is clinical diagnostics, wherein it helps doctors to perform genetic testing for rare or specific diseases. Also, it provides a non-invasive prenatal test, Panorama, for detecting genetic disorders, and a possibility to get them treated in the mother’s womb.

As explained by Sam, “A doctor can only treat a patient well, if he will be able to diagnose what ails the patient properly. In case of specific or rare diseases, MedGenome shows doctors the best possible way in which tests can be applicable. For example, if you have a specific cardio problem, we will have a list of 15 or 20 genes that are relevant to that cardio problem and will offer that as a separate test. We have many panels in neurology, oncology, ophthalmology, and diabetes which help doctors with their work.” 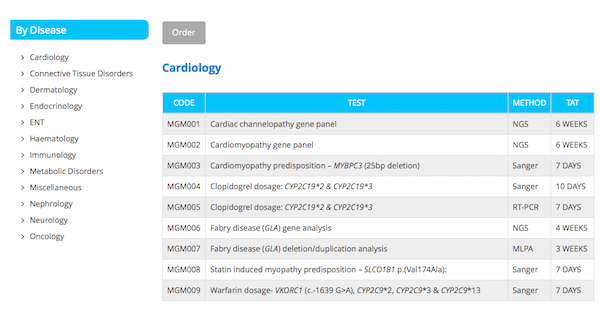 The genetic testing is suggested if a doctor or patient feels the need for it, on the basis of a lot of factors like family history, consanguineous marriages (marriage within family), birth defects, genetic disorders, chromosomal abnormality etc.

MedGenome has appointed several scientific executives, in simple terms, sales personnel, who remain connected with doctors at various hospitals. As the need for a test arises, a doctor or clinician can connect with them or the company’s customer support to get assistance. Also, one can order for the test online, but considering the risks, time and money involved in the process, it requires a prescription to be handed over offline only. So, it turns out, that most of the time doctors connect with the executive in person.

Another segment that MedGenome caters to is research, where it offers global researchers a platform to help decode variations in the genetic makeup of organisms in a different manner. The platform is MedGenome’s Next Generation Sequencing Labs in Bengaluru and California possessing Illumina’s human genome decoding machines such as Miseq, Hiseq 4000 / 2500 and X10.

As Sam stated, “Clinical diagnostics is just one part of the company. The mission is to deep dive into India’s genetic history of the last 5,000 years with global research teams and get insights on different types of diseases. With India being a host to diverse cultural practices, it becomes much easier to understand problems.”

“Creating Awareness Was The Biggest Challenge”

In the initial days, Sam believed that the biggest challenge was to create awareness among healthcare providers. “We held symposiums and mini-symposiums for clinicians and researchers in various cities on a regular basis and also had conferences trying to get our message across to the target audience,” he added.

While this is an ongoing process, affordability was another concern. However, as clinicians began understanding the benefits of genetic tests, in the long run, they started adopting it faster.

Interestingly, the other challenge was rapid technology advancement. As said by Sam, the company is committed to investing in these latest advancements to provide the best offerings to their patients.

Competition And Plans Ahead

Another similar venture in this space is Hyderabad-based Mapmygenome, the company behind the personal genomics and predictive tests brand Genomepatri. It uses state-of-the-art technology to decode and understand an individual’s DNA and provides actionable steps for individuals and their physicians towards a healthier life. It offers aplethora of mapping tests  such as Genomepatri™, CardioCardiomap™, Oncomap™, Gynaecmap™, Brainmap™.

Sam does not see anyone else in the diagnostics and research space as direct competition. However, he accepts that there are pockets of competition in diagnostics in specific disease areas.

Last fiscal, the company claims to have registered $8 Mn in revenues and looking ahead, it aims to double this number in the current financial year.

The company is also looking to expand its global presence, particularly in the South Asian Market. “With our Illumina Hiseq X10, we will be a global player offering large-scale genomics research services and solutions to various stakeholders including pharma, biotech and academia,” said Sam.

Every year in India about 5 Lakh children are born with some kind of genetic disorder. Despite us now having the equipment and technology to screen foetuses while in the womb for any anomalies, there still aren’t cures for a lot of these abnormal births.

India is an emerging market for genomics. A rising middle-class, state-of-the-art healthcare facilities, expert physicians, and increased dependency on technology to facilitate healthcare at the prevention stage are driving the growth of the industry in India, thereby expecting the industry to attain double-digit growth.

Companies such as MedGenome are furthering this noble cause by making the tech available for clinicians while also contributing to the development of science by extensively researching the most mysterious organism of all – the human being.