Jack Of All Threads: Crowdfunding Platform For Customised Tees

Jack Of All Threads: Crowdfunding Platform For Customised Tees 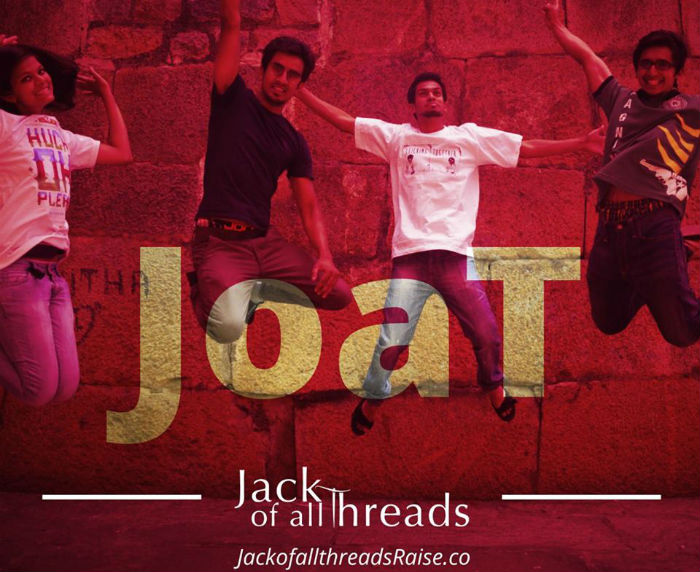 The trend of customized printed tees is widely gaining popularity these days. Be it the promotion of a college event or a social cause printed tees help gaining popularity because of iconization. People with shared interests like awareness against HIV aids, need to symbolize their cause during their programs and printed tees are the best way to do this. In short, be it anything from promotions, to setting trends, showcasing artwork, marketing, the use of tees has been common and widely accepted phenomenon.

Considering the growing use of this trend, India’s first crowd-funding custom apparel platform, Jack of all Threads was created by a bunch of college kids who wanted others to experience the joy of creating and selling something amazing. The platform allows people to create and sell their own tees, while keeping the profit at zero risk. It’s being used for all kinds of projects — college tees, fan groups, witty designs, artwork and best of all, for promoting social causes.

The startup offers a crowdfunding platform for customised merchandise. Helps in creating and selling one’s own tees. The “Make money at ZERO  risk and NO cost” attracts a great deal of designing enthusiasts.

How the raise works

The platform is used by The students for instance  to earn a few thousands in a few days and experience marketing something that they’ve created themselves!  Students usually launch tshirt campaigns for stuff their friend circle loves, for their colleges and clubs and to voice their opinions. It is also used by NGOs to ease of raising funds and spreading awareness, instead of simply donating, here supporters get a great tshirt, which NGOs say increases the likelihood of support tremendously. And unlike otherwise, the NGO doesn’t need to pay to buy the tees themselves and worry about overstocking, distribution, payment collection, even design. JoaT takes care of everything, for free.  NGOs like CUPA, CRY, The Akshaya Patra Foundation have signed with Jack of all Threads. Communities such as bands, cafes and facebook groups are also Raising with Jack of all Threads for official merchandise, even Bands like Parikrama and Sifar, cafes like Coffee Culture, communities like I Love Malleshwaram, AIESEC and The Organic Indian and events like Airtel India Marathon and Comic Con India are also using the platform.

Jack of all Threads Impacthread concept 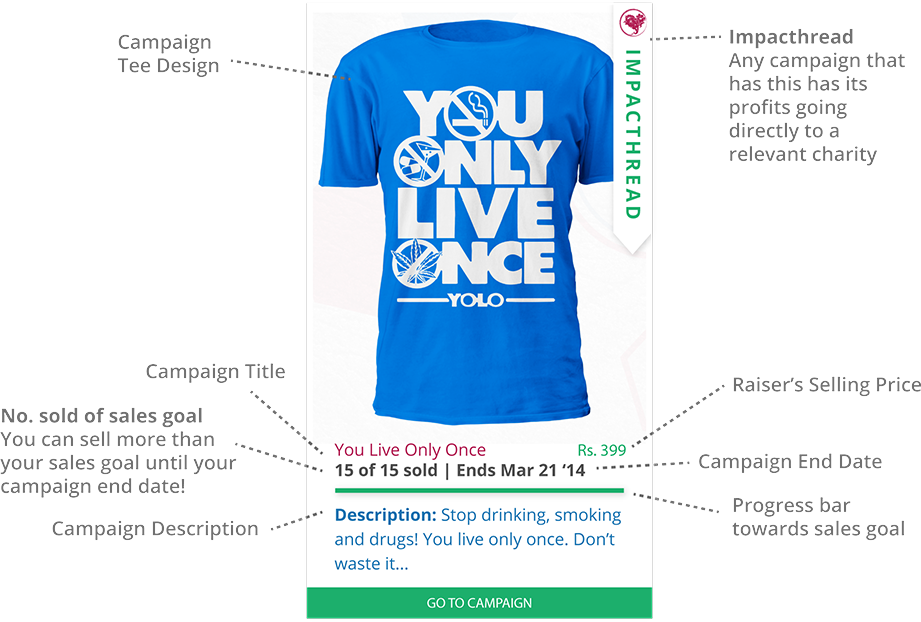 Raisers can also choose to donate a part of their campaign profits from to a social cause. In return their campaign is featured on the JoaT platform  Such campaigns also get a special Impacthread label printed on the tshirt corner as a symbol of recognition and awareness.

This new Impacthread concept is a spinoff from the previous JoaT model whereby they produced bulk tees for college groups and asked the customers to donate a few extra rupees per tee to a cause and matched that donation so that twice the amount would go for good.

Till now JoaT has seen around 150+ campaign signups and  600+ Buyers. New campaigns per day have become three-fold over last 2 months.The avg Campaign value has doubled over last month from Rs.10K to Rs20K Raisers are making a few thousand rupees in a few days (equivalent to months of savings)  and  hence raisers are returning repeatedly! Its product range includes T-shirts, Hoodies, Mugs, Caps, Business Cards, Banners, Flyers, Wristbands with printed tees as its main product.

Also, NGOs like Akshaya Patra Foundation, CRY, People for Paws, Precious Paws Foundation are raising funds using the platform. It has a wide  user-base  of 15 – 50 year olds from all over the India, including all the Tier cities. The headquarter office is located in Bangalore.