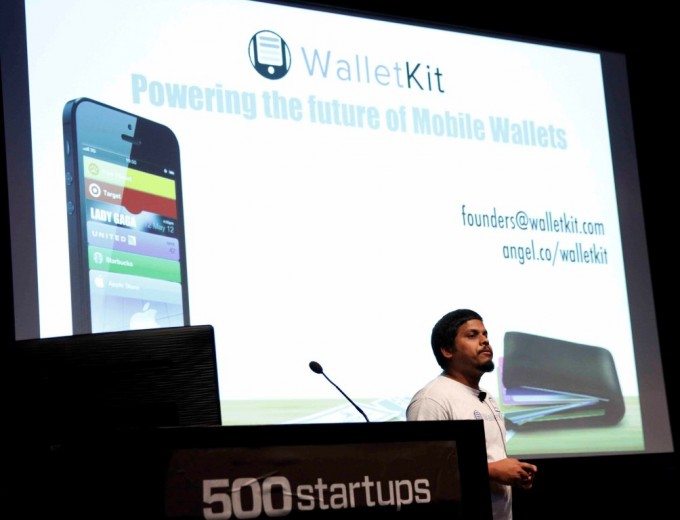 Are your pockets always burdened with a bulgy wallet and other miscellaneous items? Do you constantly misplace tickets, boarding passes? Do you find the task of organising all your paperwork, before a big trip too tiresome? Mobile Wallets like Apple Passbook has a solution for you. Imagine a world where your smartphone is your wallet, and all your paperwork: tickets,coupons,boarding passes can be quickly accessed, modified and used through your smartphone, thus totally eliminating paper and all the associated hassles!

WalletKit makes it super simple for companies to integrate with different mobile wallets. WalletKit was co-founded by Kevin William David and Ramakanth Dorai, from Chennai and Coimbatore respectively. They are currently in San Francisco as a part of the prestigious 500Startups accelerator program.

WalletKit lets businesses make customized digital boarding passes, tickets, store cards, and coupons for various mobile wallet platforms. Moreover, it gives retailers and other companies a way to analyse the usage and redemption of these kinds of digital tokens.

WalletKit, like several others, offers both Application programming interfaces(APIs) for developers as well as visual, Do it yourself(DIY) pass-building tools for its users.

Techcrunch and The Next Web picked WalletKit as one of the top 10 standout companies and promising companies respectively from the 500startups demo day.

From Chennai to San Francisco:

How they got into 500startups is a really interesting story. Kevin and Ramakanth realized that their target audience for WalletKit was in the US. So they tried to have an email exchange with Paul Singh, an investor, to get into 500startups accelerator programme. When he did not reply they did something, which most people would not dare to do. While Singh was on his visit to India, they tracked him down at his hotel, after seeing his geo-tagged tweet with a photo attached, taken from his hotel’s window.

They traveled down to Bangalore from Chennai the next day and met him in his hotel lobby, presented to him a customized pitch book for each partner at 500 startups along with a poster of their life-size cartoons. However Paul was in a hurry, so they managed to convince him to pitch their idea to him, in a cab on the way to the airport. Three weeks later they got a call that they had been selected!

Inc42 had the opportunity to talk to Kevin William David. Here are excerpts from the interview:

Inc42: How did you come up with the idea for WalletKit?
When Apple came out with the Apple passbook and Apple maps, my Cofounder and I knew Apple Passbook was going to be huge.We figured we could help companies to integrate with Apple Passbook easily.

Inc42: What differences have you observed between the Indian Start Up culture and the US?
Everything moves really fast in the US. Also, youngsters are encouraged to startup. Here they perceive being young, an advantage and take youngsters more seriously. It is generally not the same case in India.

Inc42: How has the 500 Startups experience been? What’s been most memorable day at 500 startups?
Our journey so far has been amazing. We have made lots of contacts to help us grow. Reached out and networked with a lot of amazing people.
Most memorable day would be when we were picked among the Top 5-10 startups from the entire batch by media after demo day

Inc42: India now has the highest number of Mobile users in the world, and almost everyone is switching to a smartphone. When do you think India will be ready to embrace WalletKit?
Right now only Cleartrip and Capillary Technologies offer Apple passbook service in India, if I am not mistaken. So there is potential for WalletKit.
I think India will be ready to embrace Wallet kit in probably 3-5 years, or maybe sooner.

Inc42: Could you describe your experience at Demo day.
I was really nervous that day. I have spoken on stage on numerous occasions before, but I was still not very confident.
As soon as I got on stage, my fears melted away and I was able to do a good job.

Inc42: How is WalletKit different from its competitors?
Our main aim is to keep the platform super simple and easy to use.But what makes it more unique is its back-end. Through an online dashboard, businesses can do a lot of things, like track users’ engagement with passes, run reports, and also update their passes in real-time with just a few clicks.

Inc42: What is your favourite book/movie of all time?
My favourite book is Steve Jobs Autobiography by Walter Isaacson and my favourite movie would be ‘The Pursuit of Happyness” starring Will Smith.

Inc42: Which inspiring personalities past/present would you like to have a dinner conversation with? Why?
I would love to converse with  Steve Jobs, Mark Zuckerberg and Elon Musk.
Steve Jobs because he was a visionary, he changed the way in which we communicate.
Mark Zuckerberg because he started out when he was just 19 years old and now Facebook is worth billions. Also he still has a lot of control over his company. He still has around 30% stake in it, which is phenomenal.
Elon Musk: At just 41 years old, he is now the CEO of three amazing companies. All three of his current companies: SolarCity, Tesla Motors and SpaceX are valued over $1 billion.

Inc42: Where do you see yourselves say 5 years from now?
We are powering the future of Mobile Wallets. For us digital passes and tickets are just the beginning. Imagine a future where companies use WalletKit to power every single feature on different mobile wallets. Thats where we are headed towards!

Inc42: Any advice that you could give to young Entrepreneurs
Do what you love! Be possessed by what you want to accomplish in life. Listen to people who tell you that you can’t do it because they keep you going!