Inntot Is Looking To Make Waves With Its Digital Radio Solutions

Inntot Is Looking To Make Waves With Its Digital Radio Solutions 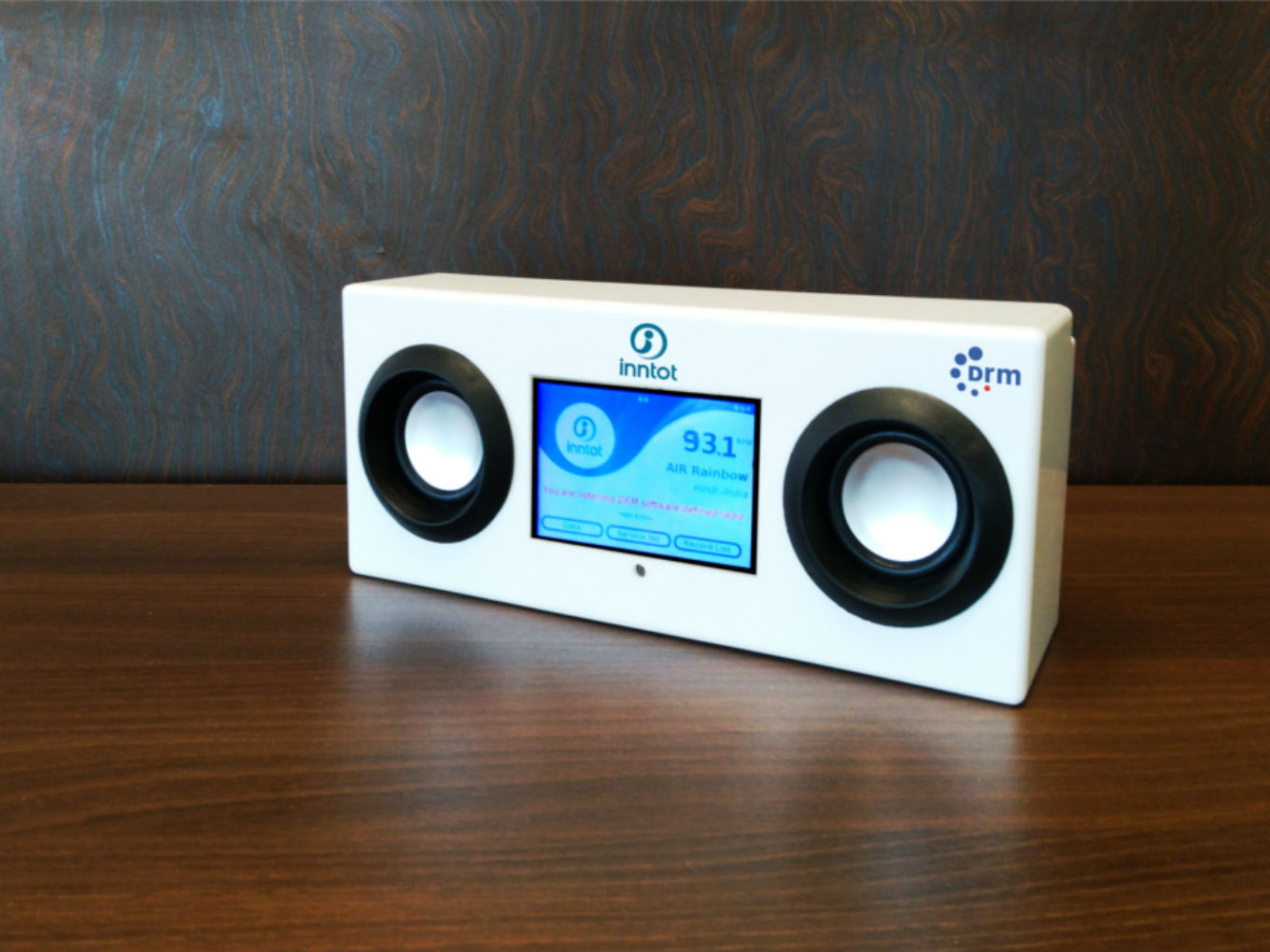 At present, Inntot is focused on India as its key market

It is also targeting chip-makers (SoC Makers), ODMs, and OEMs from South Korea, Japan, the US, Europe etc.

Technology shifts have a way of shifting consumer behaviour. For most millenials, time spent watching TV has been replaced by online streaming platforms such as Amazon Prime, Netflix, Hotstar, and YouTube. In the same way online music streaming services like Gaana, Spotify and Jio-Saavn are taking the spotlight away from traditional analogue AM and FM radio stations. However radio is now set for a disruption as advancements in digital radio promise a completely new experience for radio listeners.

In layman terms, we know of analog radio as Amplitude Modulation (AM) as the first method used for the audio radio transmission (for example, All India Radio listened for news and bulletins) and Frequency Modulation (FM) (for example, Radio Mirchi, Fever 104, etc). Being capable of providing better sound quality, FM is mostly used for music streaming services and is more popular than AM but it has an access range of only 60 Kms which creates dropouts on highways, underground structures and remote areas. Also, FM has limitations in content broadcasting (cannot broadcast news) and the number of channels (322 as of September 2017) also need to be increased, considering radio’s overall reach to 99% of the Indian population.

The radio industry has been constantly under transformation, driven by a shift in technology to digital and by changes in the way listeners are consuming music and other content. After AM and FM, Digital radio is now next in line.

Former Wipro employees, Prasanth Thankappan and Rajith Nair looked to make a mark here. With an aim to revolutionise the way radio content is consumed in India, the duo laid the foundation of Inntot Technologies in 2014. Since then the startup has bagged several industry accolades, and also received backing from Unicorn Ventures.

“The digital television revolution, with its obvious and far-reaching advantages, started in the late 90s and spanned into 2000s, marking the sunset of analog television. Similarly, it is the time for digital radio to achieve the same feat of digital television the world over,” wrote Nair in a LinkedIn article dated July 9, 2018.

In comparison to analog transmission, digital radio offers many advantages. For instance, unlike analog, in case of digital, it is possible to have 3-4 channels on a single frequency carrier. For instance, today 91.3 MHz frequency is dedicated to one radio channel (Radio City). But with digital radio, three to four such channels can be transmitted at one frequency depending if its FM or AM broadcast respectively.

This will further help broadcasters in the transmission of different kinds of data together such as music, news and traffic updates, and graphics-based advertisements. “Future digital radio is all set to have a display panel and graphics-rich advertisements can be expected. This will not only help broadcasters to increase their revenue but at the same time regulatory bodies can fetch revenue in the form of broadcast license costs,” added Nair.

Digital radio can also act as an emergency warning system which ensures that an emergency warning alert that will stop all the playing channel in a switched-on radio as well as in a standby state of the radio and will continuously issue warnings to listeners within a range of 300 kms in the event of natural disasters.

How Inntot Is Making A Difference Here

Though the transmission side in India is almost ready, next-generation digital radio receivers are expensive (can go upto INR 14K), which is posing as a hurdle in the common man from benefiting from the features offered by digital radio.

“The USP of our solution is that it runs on generic hardware, thus making it an affordable solution (substantially low) for original equipment manufacturers (OEMs) and bringing it within the reach of an average consumer,” adds Nair.

The infographic below depicts digital radio modulation, transmission by broadcaster and reception and demodulation at the receiver side. 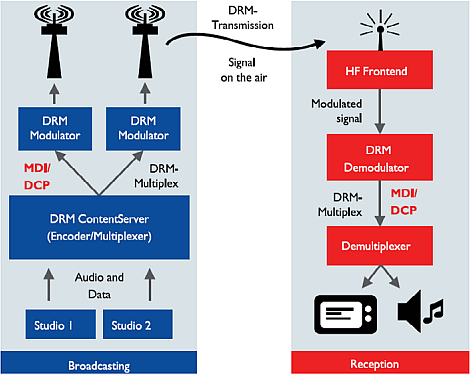 Instead, Inntot Technologies is facilitating software-defined radio (SDR) based DRM+ Receiver solution, wherein the software can be embedded directly to the fixed receivers, automotive/in-car radios, smartphones, as well as USB dongles. Here’s an infographic showcasing how the Inntot solution is different from using a separate hardware demodulator which adds to the overall cost of the digital radio receiver.

Here is a brief comparison of these with the existing analog FM and AM:

India has adopted the DRM family of standards because of its reach and compatibility with the existing analog mode of transmission. Typically, the DRM standard identifies two operating modes: DRM for AM band” and “DRM for FM band”. DRM30 modes use the AM bands below 30 MHz and DRM+ modes use the 30-300 MHz spectrum centred upon the existing FM band.

On August 20, 2018, director general of All India Radio (AIR) also announced that DRM as the digital radio standard that will be used in VHF-II band (88-108 Mhz) in India eventually replacing FM. For the uninitiated, Very high frequency (VHF) is the International Telecommunication Union (ITU) designation for the range of radio frequency electromagnetic waves (radio waves) from 30 to 300 megahertz (MHz).

Interestingly, Norway is the first country which has completed the digital switchover and has shut down the analog FM in December 2017. Other countries like Germany, UK, Switzerland, Italy, are also expected to switchover to digital radio by 2020.

Not The Only Player In This Frequency

Inntot is not the only company looking to offer cost-effective DRM receivers. Launched in 1993, the New Delhi-based OEM manufacturer Communications System Inc., has also put up its digital radio for sale on online websites like Amazon, and IndiaMart.

As of May 2018, the company has put up a notice for being in production for the second batch of digital radio receivers. However, despite tracking for weeks, its status remains ‘currently unavailable’ on Amazon, while we were not able to place an order from Indiamart.

Inntot also competes with major semiconductor companies who have chip-based demodulator solutions. These companies have to rely on external vendors for software components like middleware. Also, they require help in application development, field testing, etc, whereas being software-based, the Inntot solution is full, complete, end-to-end, and integrated.

A Choppy Ride And An Eye On The Future

Like all startups, Inntot has also had its share of challenges which it has managed to overcome. From identifying the right internet protocol (IP) for development to zeroing in on a digital radio receiver IP; from putting together the right team to finding its first alpha (high-profile) customer, the Inntot founders have seen it all. They had a tough time in arranging the initial funds. However, Kerala  State Entrepreneur Development Mission helped them secure the initial funds

“Our collaboration with Telechips Inc was truly a turning point for us… We travelled to Seoul, South Korea, and demonstrated our prototype to the CEO of Telechips Inc. He was impressed and asked us to port our IP solution to one of the identified hardware platforms of Telechips,” says Nair.

Most recently, at the DRM Round Table Conference held in New Delhi on October 10, 2018, the startup demonstrated its own tech in Digital Radio Reception (DRM in FM band) on a smartphone. DRM in FM band was demonstrated in other form factors as well, namely desktop and automotive infotainment modules.

At present, Inntot is focused on India as its key market, considering the increasing smartphone and automobile users in the country. It is also targeting chip-makers (SoC Makers), ODMs, and OEMs from South Korea, Japan, the US, Europe etc. “Russia and South Africa could be potential markets for us as these countries have also mandated analog sunset and transition to digital radio broadcasting,” says Nair.

The Indian authorities are making progress as well. The Telecom Regulatory Authority of India (TRAI) issued a suo-motu consultation paper on ‘Issues related to Digital Radio Broadcasting in India’ on February 1, 2018, to seek stakeholders’ comments on various issues relating to digital broadcasting.

As the next critical step, the regulator is expected to announce a Digital Radio Policy, which may lead to the auction of white spaces in VHF-II (FM) band. This, in turn, will help pass on the benefits of DRM in FM band to all stakeholders including private FM broadcasters, listeners, manufacturers/OEMs.

So, are you ready to tune into new-age digital radio? It’s coming soon.