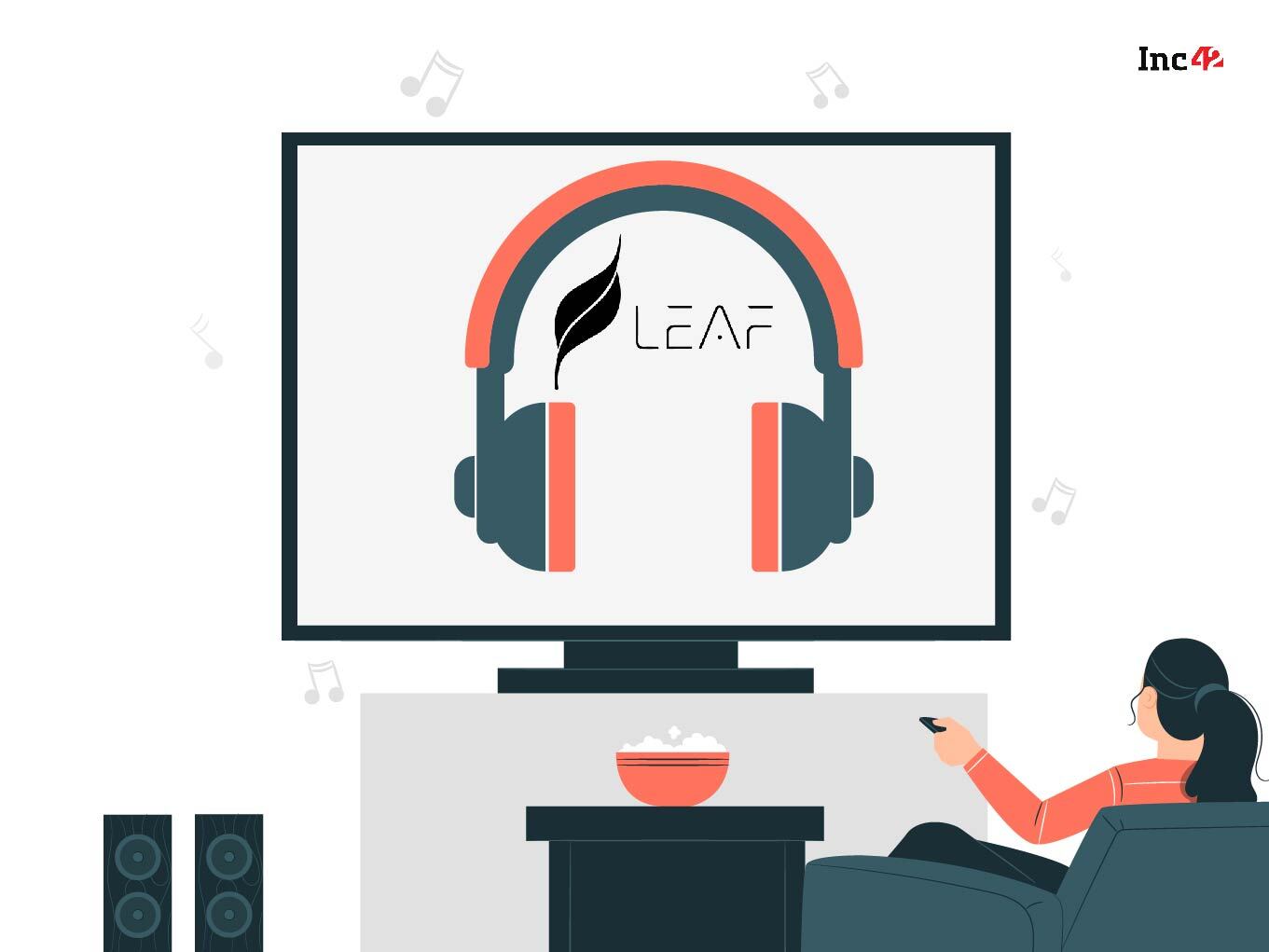 Founded in 2017, Leaf Studios is building headphones and earphones targeting movie buffs and binge-watchers and has seen a 4x jump in revenues over the last 12 months

The headphones and earphones market is a highly personalised segment, given that there is hardly any plain vanilla hardware. Most brands build with a design differentiation in mind, be it casual/home listening or music workout, genre-specific features or immersive gaming requirements, hoping to enthral their target audience.

As new trends come up, existing brands go all out to fine-tune their products. But in a fiercely competitive market with deep-pocketed players, new brands on the block often find it difficult to innovate or attract the right audience.

A few years ago, Delhi-based headphones startup Leaf Studios faced this conundrum. Not wanting to enter the market without a target audience in mind, or a USP, for that matter, cofounders Ayush Banka (COO) and Paras Batra (CMO) started exploring consumers’ pain points in this space.

Eventually, they had their eureka moment and decided to create a new niche that nobody had tried before. Leaf Studios decided to develop headphones for people who love to binge-watch content on the phone, PC, TV or any other cool gadget for entertainment.

When we say gadgets, it is a given that the segment requires a lot of experimentation and innovation to thrive. But nothing much happened in the earphone-headphone market in India, at least not before 2014. From then on, a host of homegrown startups like Delhi-based boAt, Gurugram-based Noise and Mivi from Hyderabad have streamed in with cutting-edge desi products that featured durable builds, wireless tech, active-noise-cancellation and much more. Better still, they are affordable by Indian standards. 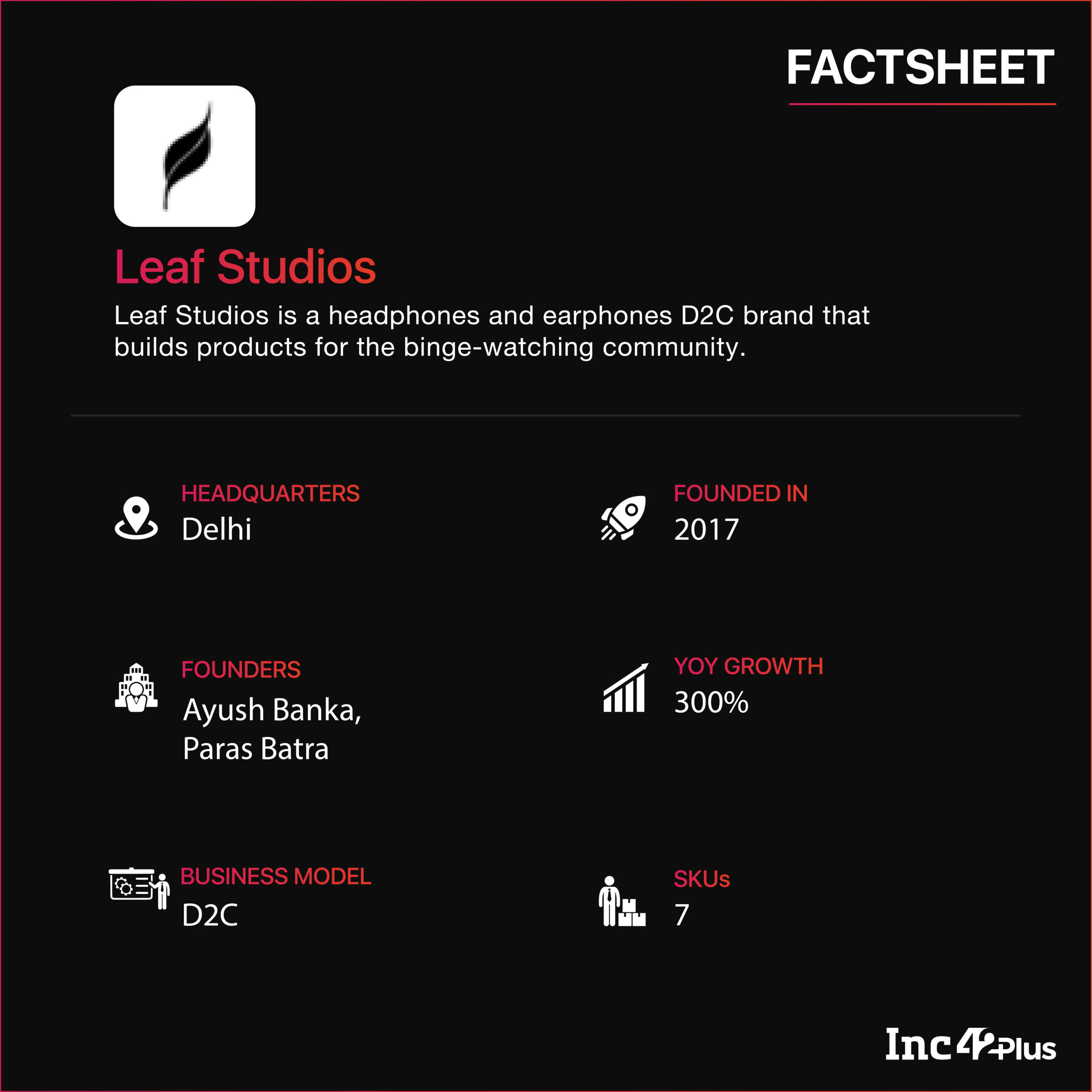 Building For Binge-Watchers Amid Challenges

According to Hamburg-based market analysis firm Statista, the total number of internet users in India quadrupled between 2010 and 2017 to reach 422 Mn.

Further, the year 2017 also witnessed a 5X increase in online video consumption in India, with 96% of the usage focussed on long-form video.

This was the time when Batra, an IIT-Delhi alumnus and Banka, a Delhi Technological University alumnus started working with a few manufacturers in China, gave them a product blueprint and component requirements and asked the manufacturing unit to build the first set of Leaf earphones. The product development exercise turned out to be successful and the manufacturing cost was right enough to launch value for money products.

The startup took the ecommerce route and started selling on Amazon in the same year. Its first product was a pair of wireless earphones called Leaf Ear, priced at INR 2,500. The brand’s stock of 1000 products was an instant sellout. Given the favourable reception, the founders decided to scale up and take the direct-to-consumer (D2C) route for cost-effective sales, distribution and marketing.

Amid the pandemic, the consumption of digital content increased which led to Leaf Studios witnessing a 4x jump in revenues over the last 12 months

Although coming from an electronics engineering background, they understood the core technology, the operations side often tripped them up. One of the key challenges was monitoring and controlling output quality, especially when there was large-scale production. The founders took advice from industry veterans to solve this quickly and build a solid supply chain. The next big challenge for Leaf Studios was brand building.

“A lot of people think that a good product will take care of everything else. But that couldn’t be further from the truth. A good product can create trust and induce word of mouth, but it cannot evoke emotions that will lead to brand loyalty. That can only come from brand building and right storytelling,” says Batra.

To master the art of brand-building, the cofounders set on a journey and talked to other D2C founders for insights. And during these interactions, a key point emerged: The emphasis should be on building a community around the use case of a product instead of just talking about product features as the latter can often be generic while the former helps create an identity for the brand.

That realisation was a turning point as the cofounders went all out to develop a sound USP by addressing movie buffs and those who binge-watch TV shows (or OTT content, post-pandemic).

“Through our brand-building activities, we try to connect to this specific personality trait (binge-watching). when people come across a person with Leaf headphones, they should know he/she is a movie buff,” says Batra.

The startup’s social media and content strategies further focus on community building, engagement and value creation. Its posts on social media celebrate binge-watchers and provide movie/TV show recommendations and reviews instead of routine product promotion. This helps consumers get a sense of belonging and engage more, resulting in improved conversions due to better brand familiarity.

The next step was to solve for the binge-watchers and identify challenges they face with existing products in the market. These included uncomfortable hardware (many suffered distinct physical discomforts after using headphones for a long period), short battery life than what’s required for binge-watching and a lack of balanced sound instead of boosted bass and treble.

The first two problems were relatively easier to solve, but the third one proved to be tricky. The company started to get contradictory feedback as some users found the bass too loud while others felt it was too low. After analysing the feedback, Leaf had another revelation. The product was not the problem; it was all about how people perceived sound.

Such findings may seem biased at first, they have a base. In 2018, an audio illusion perplexed people as they were not sure whether a computer-generated audio clip from vocabulary.com said ‘Yanny’ or ‘Laurel’.

There was furious disagreement (similar to the 2015 gold/blue dress controversy or the classic face/vase illusion) as everyone heard one thing or the other. Resolving the confusion, Poppy Crum, chief scientist at Dolby Laboratories, explained that different people perceive sound differently on a physiological level due to age, gender, genetics and other personal demographics.

To solve the sound problem, Leaf Studios developed and patented a technology in December 2020 known as personalised sound, where each pair of headphones would work in sync with its user. The company allows people to download an app and use the headphones to take hearing tests so that the hardware can understand their perception of sound and adjust its sound accordingly.

Finally, it came to logistics operations and the best practices required for optimum growth. Leaf Studios faced a major challenge in terms of RTO (return to origin) that continues to plague all D2C brands. Delivery failures mean brands have to pay double the freight rate without selling anything. Besides, with ecommerce behemoths like Amazon and Flipkart offering same-day and next-day delivery features, consumers expect the same from all D2C brands.

The problems do not stop there. No matter which 3PL partner is in charge of the last-mile delivery, it is always the brand that gets represented. So, a logistics partner must ensure an excellent post-purchase experience or the brand concerned tends to lose customers. Put together, these factors eventually hurt a company’s sales and revenue, and striking a gainful partnership in this space becomes increasingly difficult.

Leaf Studios worked with various courier partners and 3PL companies before collaborating with Delhi-based Shiprocket, an end-to-end logistics provider that has helped reduce the startup’s RTOs by 20% and improved its sales volume by 25% in the last 12 months.

Currently, Leaf Studios is expanding its product line and looking to venture into soundbars, a big trend in this segment. It is also experimenting with active noise cancellation (ANC) and plans to bring this premium feature to its value for money segment. The company has already released ANC headphones called Leaf Hush.

The startup also intends to shift its manufacturing from China to India and locally build its products to generate employment in India and improve its profit margins.

“The future belongs to specialist brands with active communities and not generalists. Brands that build themselves around specific use cases and position themselves as specialists are going to do well in the future,” concludes Batra.