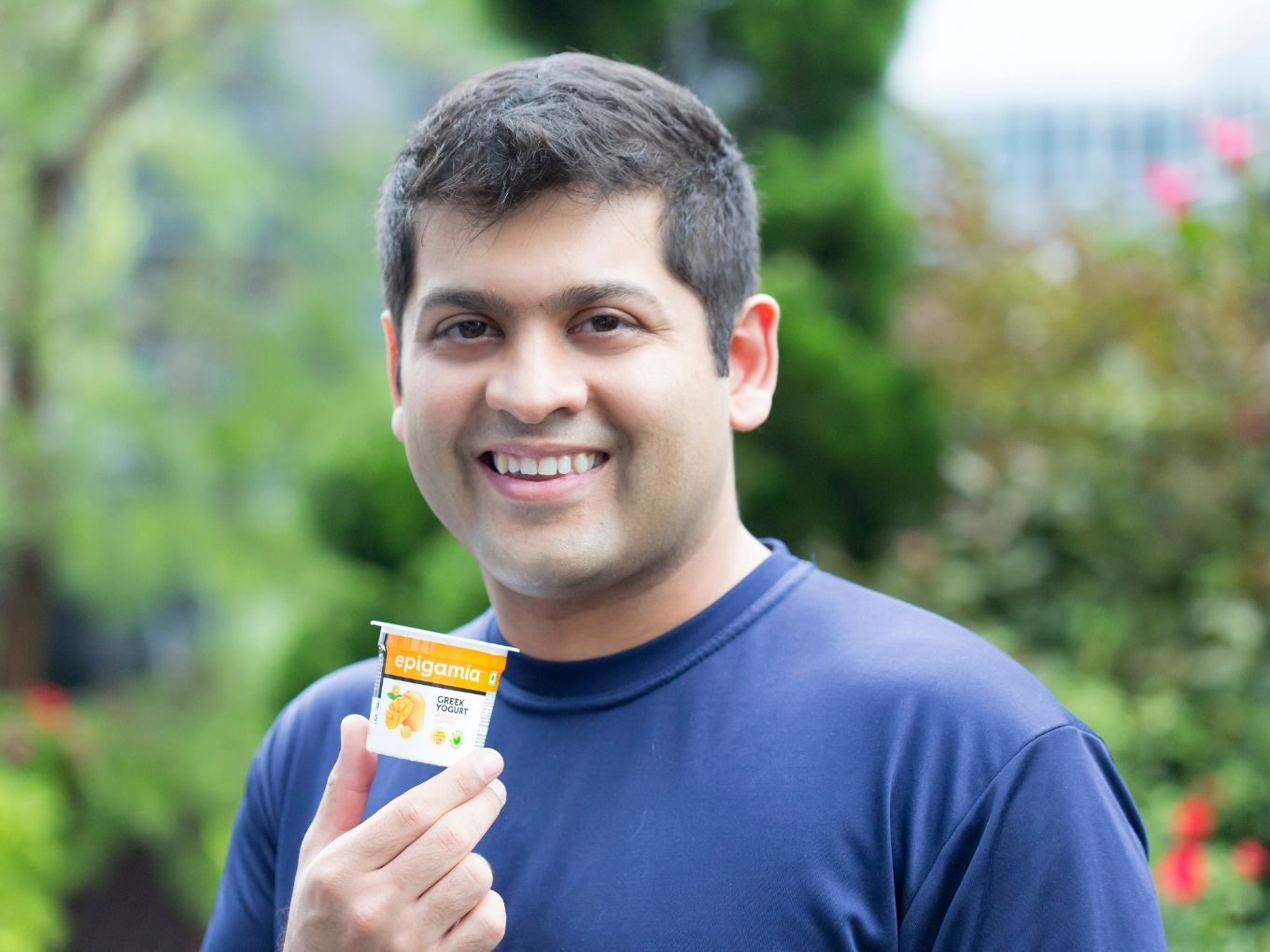 Besides deliveries, it collaborated with Delhi-based retail tech startup Gobbly in setting up 3-4 kiosks for contactless vending machines

While D2C and online stores have definitely become the norm after the lockdown in India, there’s no doubt that gaining traction is still a matter of being where the customers are. While many millions of Indians have been shopping online, post the unlock rules for reopening the economy, retail outlets are slowly coming back online.

So brands are now looking at combining their efforts across all touchpoints to create an omnichannel strategy. For Mumbai-based Greek yogurt brand Epigamia, the transition meant heavily relying on ecommerce, contactless retail, and its own website. But as ever distributing products that require cold storage is not easy. So Epigamia went back to the basics and looked at how it could tackle distribution to win the D2C game.

Like any other FMCG brands, Epigamia also faced the wrath of the pandemic, where the majority of its distribution channels such as kirana stores, restaurants, kiosks and more were hampered. It doubled down on D2C selling and witnessed 25% revenue coming from online channels, over 4x growth compared to pre-Covid times.

“Honestly, we did not expect this to happen! We thought it would just be a gap filler until things get back to normal. Surprisingly, our business not only stayed, but it actually grew,” claimed Rohan Mirchandani, cofounder of Epigamia.

But Mirchandani is quick to point out this is not a pivot, but an extension to the company’s omnichannel strategy. The brand has forayed into digital marketing and creating better user experience on its D2C site, which is entirely new. A visit to its online store revealed that the company asks for pincode data, even before a user has started placing the order. This way, the company looks to eliminate hassles of refunds and cancelled orders, and deliver to pin locations where its distribution networks have access. “Otherwise, we were all literally losing our hair with orders coming from across the country,” he added.

As a result, the orders on its websites are getting bigger and bigger with the cost being comparatively lower than buying from retail outlets. Mirchandani claimed the Epigamia wave has now hit the Tier 2 and Tier 3 cities, where a behavioural shift has occurred towards D2C brands.

Unfortunately, it becomes difficult for companies like Epigamia to serve these smaller cities, given the nature of the products as it requires a proper cold storage facility and a larger ‘cold chain’ distribution network. So the company has collaborated with Delhi-based contactless retail-tech startup Gobbly in setting up 3-4 kiosks. It is also looking to partner with more startups to set up kiosks in societies, schools and hospitals across the country.

It is currently working to optimise delivery and carefully monitor the demand across Tier 3 cities, and will realign its distribution accordingly. The company also told us that it is extensively leveraging data analytics and machine learning algorithms to further map its offline distribution network. 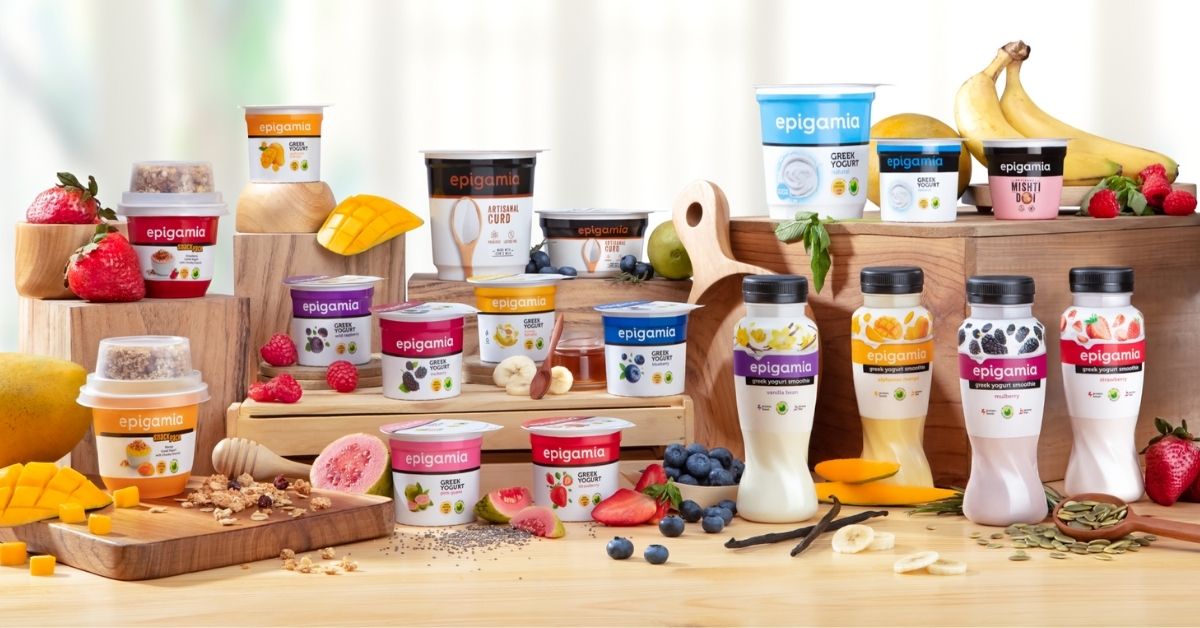 Epigamia used parent company Drums Food brand Hokey Pokey’s logistics and distribution infrastructure to start things off many years ago. And in the past few months, these have become last-mile fulfilment centres to cater to the D2C demand. This has obviously helped in lowering delivery costs in some locations.

“With improved margins, this has become really profitable for us. We’re following the same route that we use to service our general trade (GT) stores,” Mirchandani said, adding that the minimum order value per customer is around 10/15 cups of yogurt per order.

These distribution centres primarily cater to metros and Tier 1 cities, but Epigamia is looking to expand this to reach Tier 2/3 cities too.  “Five years ago when we started Epigamia, nobody wanted to take our distribution,” recalled Mirchandani, given many failed attempts by other brands.

Now that it has the base of its own distribution channel, the company is also experimenting with new products. Founded by Mirchandani, Uday Thakker, Rahul Jain and Ganesh Krishnamoorthy in 2015, Epigamia was started as a Greek yogurt brand, but today, it is shedding its dairy roots by going with plant-based foods.

Obviously, the new products are a result of months of market studies and research, but a lot of it has to do with how Epigamia solved its distribution problems and this allowed the company to focus on new product development. 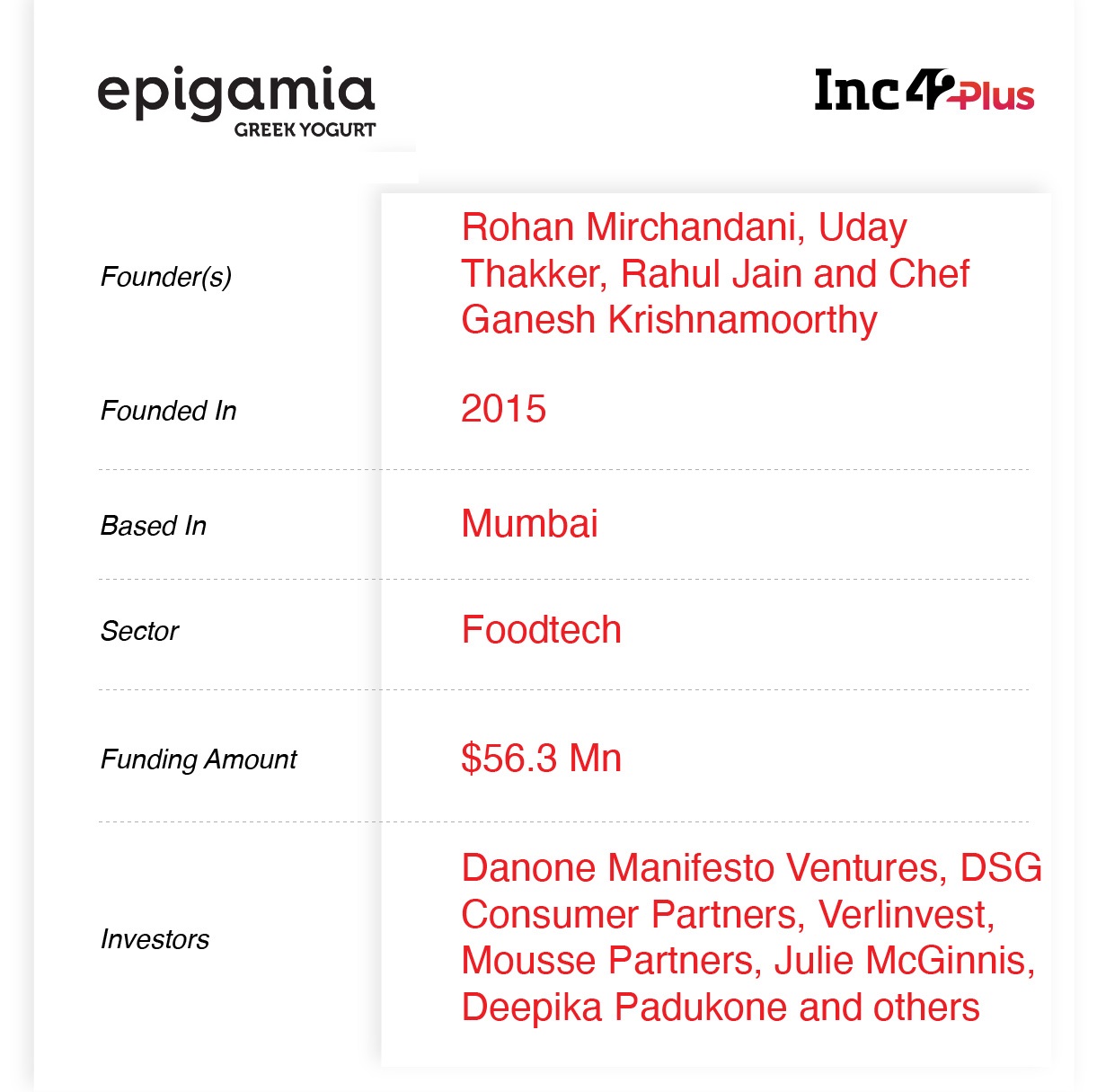 The Business Of Yogurt

Growing 70% year-on-year (Y-o-Y) since FY17, Epigamia has attracted a slew of investors, including Danone Manifesto Ventures, DSG Consumer Partners, Verlinvest, Mousse Partners, Julie McGinnis, Deepika Padukone and others. Till date, the company has raised a total of $56.3 Mn in funding, where it plans to add new products and expand its distribution channel across the country.

Epigamia said that in FY20, its revenue grew by 20% to INR 110 Cr from about INR 87.8 Cr in FY19, however, we could not independently verify these figures for the year ending March 31, 2020. “The drivers for growth have been our new product launched and expansion into new distribution and channels. Our overall profit margins have improved by 20%, and we have been profitable in the western region (Mumbai etc),” Mirchandani told Inc42.

For FY2021, the Covid-19 impact would certainly have hit the revenue performance, but Mirchandani is confident of the company’s new plant-based products making a mark in the new reality and competing with other new D2C brands. “As much as we expect the plant-based community to love our products, we believe in creating a balanced approach for everybody, irrespective of the diet that they follow.” 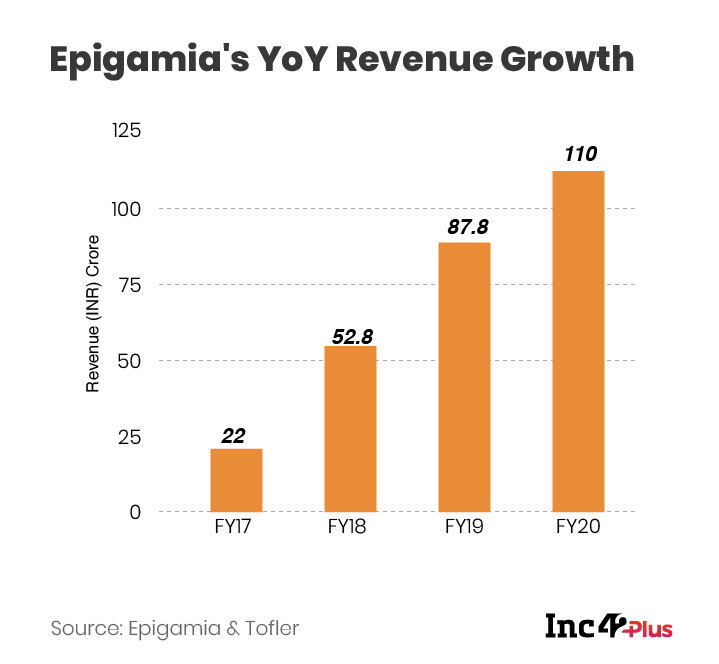 As the world is slowly turning to plant-based products, driven by consumer concerns around health, sustainability and wellbeing of animals, there has been a significant change in what people consume. Plant-based diets are gaining popularity, with the number of vegans and vegetarians on the rise, both in India as well as the world.

Now, Epigamia has also entered the market with a new range of plant-based alternatives made from coconut milk, which also includes a version containing jaggery, along with mango and strawberry-based yogurts in the pipeline. 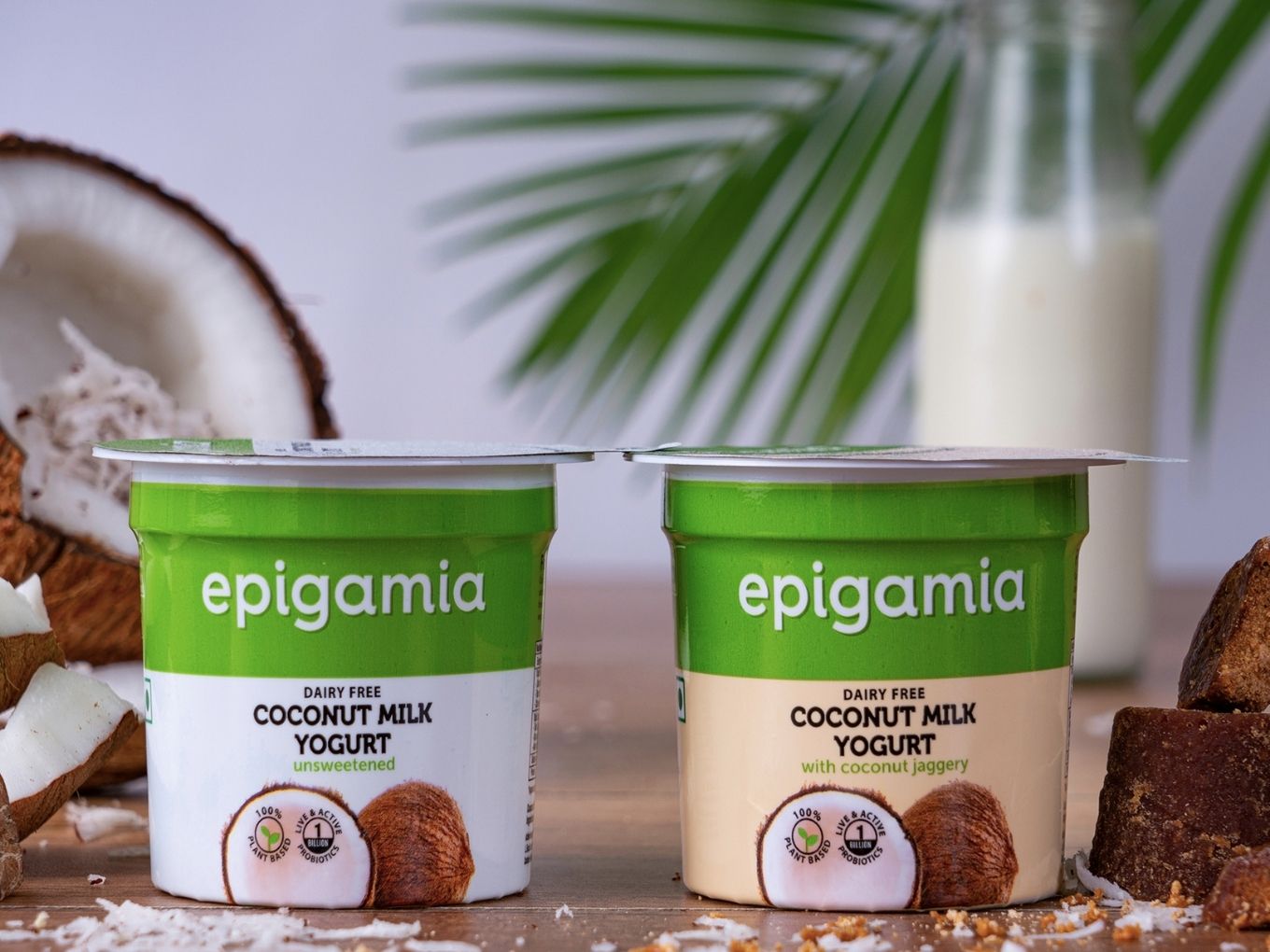