How FMCG Startup Goodness! Beverages Grew To 100K Monthly Customers In 2 Years By Capitalising On Tech

From using Fitbit or any other fitness device during exercise, eating salads and drinking the proper amount of water, the average Indian consumer has finally woken up to the concept of a healthy diet. ‘Holistic living’ is no longer a concept related to yogis and yoginis who twist their bodies into unnatural positions and promote veganism as a dietary choice. Holistic living is part of a conscious lifestyle choice that the 18-35 spend-ready population is willing to make in order to live longer and healthier. The key word being here – ‘spend-ready.’

Playing on this need to cater to the willing to spend Millennial looking for alternative and healthier ‘online cafe experience’ is Goodness! Beverages. The O2O company formerly known as Dropkaffe began operations in April 2015 in Bengaluru by launching a slew of beverages – cold coffee, black coffee etc. and having the same delivered to the users.

The reason for choosing the relatively less cooler and definitely lesser known dairy beverages section is simple. As per Chaitanya Chitta, co-founder of Goodness! Beverages, dairy has always been about functionality. Products like dahi, lassi, chhaach, buttermilk and traditional yoghurt fall under the ready to order category. “There haven’t been that many innovations when it comes to functional, healthier and fun choices in the ready to drink, dairy segment, have there?” he adds.

When it comes to cold coffees choices, we still have to line up at Starbucks and shell out hundreds of bucks per drink on an average. Besides, a little research yielded that the ready to drink industry in India is worth close to $1.08 Bn (INR 7,000 Cr).

The startup’s competitors range from traditional beverage chains Starbucks, CCD, Blue Tokai and the aforementioned Amul, Aarey’s and to niche brands such as Epigamia, Mother Dairy, Nandini (one of the largest brand in South India for packaged dairy products). So it behooves us to find out how Goodness! Beverages has managed to enter the FMCG tech vertical and declaring a GMV of about $31K (INR 20 Lakhs) per month, in April 2017. 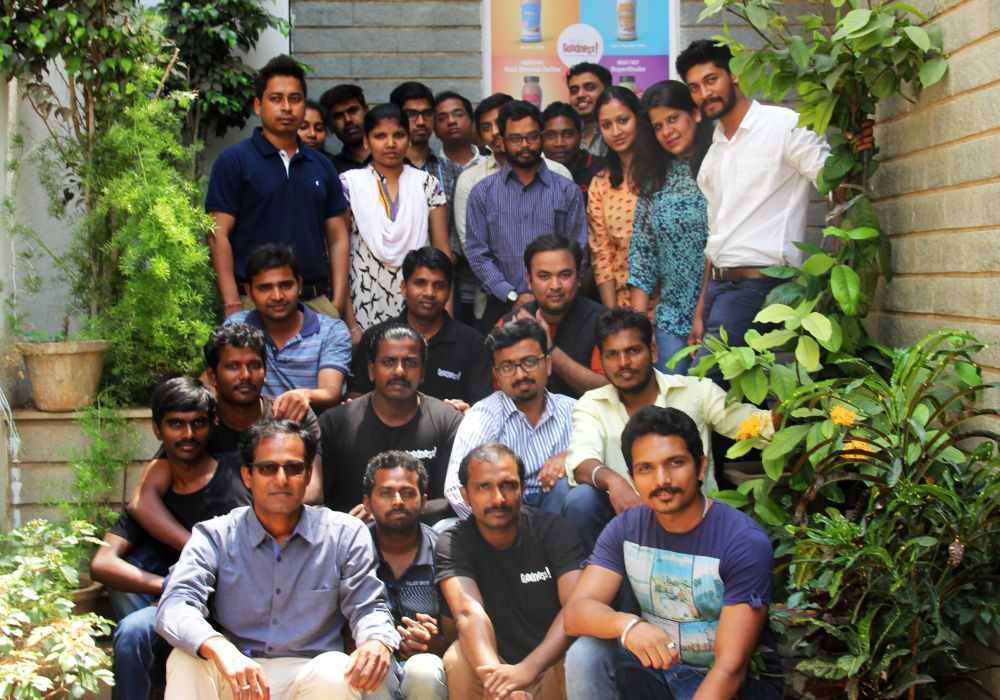 Since Goodness! Beverages is essentially a food play, instead of foodtech (with a QSR component among other factors), the practical thing to do would have been to capture offline retail channels – supermarkets, mom-and-pop stores etc. The way legacy businesses such as Coke, Pepsi, Starbucks, Café Coffee Day have done it. And Chaitanya agrees. “Food and beverages (F&B) is mostly an offline business with maybe about 5% of all businesses running purely on the online spectrum.”

And this is where it gets interesting.

“When we began, we were very clear on one thing,” says Chaitanya. “To build an established brand in the FMCG vertical, a beverage brand could not be done exclusively offline, by taking on established names such as CCD and Starbucks, to name just two. We wanted to figure out Product Market Fit and for that we decided to keep the business exclusively online. A non-tech, non-ecommerce business with extremely limited resources cannot survive in today’s market conditions.”

The reason behind the team’s confidence in adopting an online, ecommerce model was their previous experience. The co-founders – Chaitanya and Lakshmi Dasaka spent close to a decade in New York and wanted to startup in the consumer space when they moved back to India. 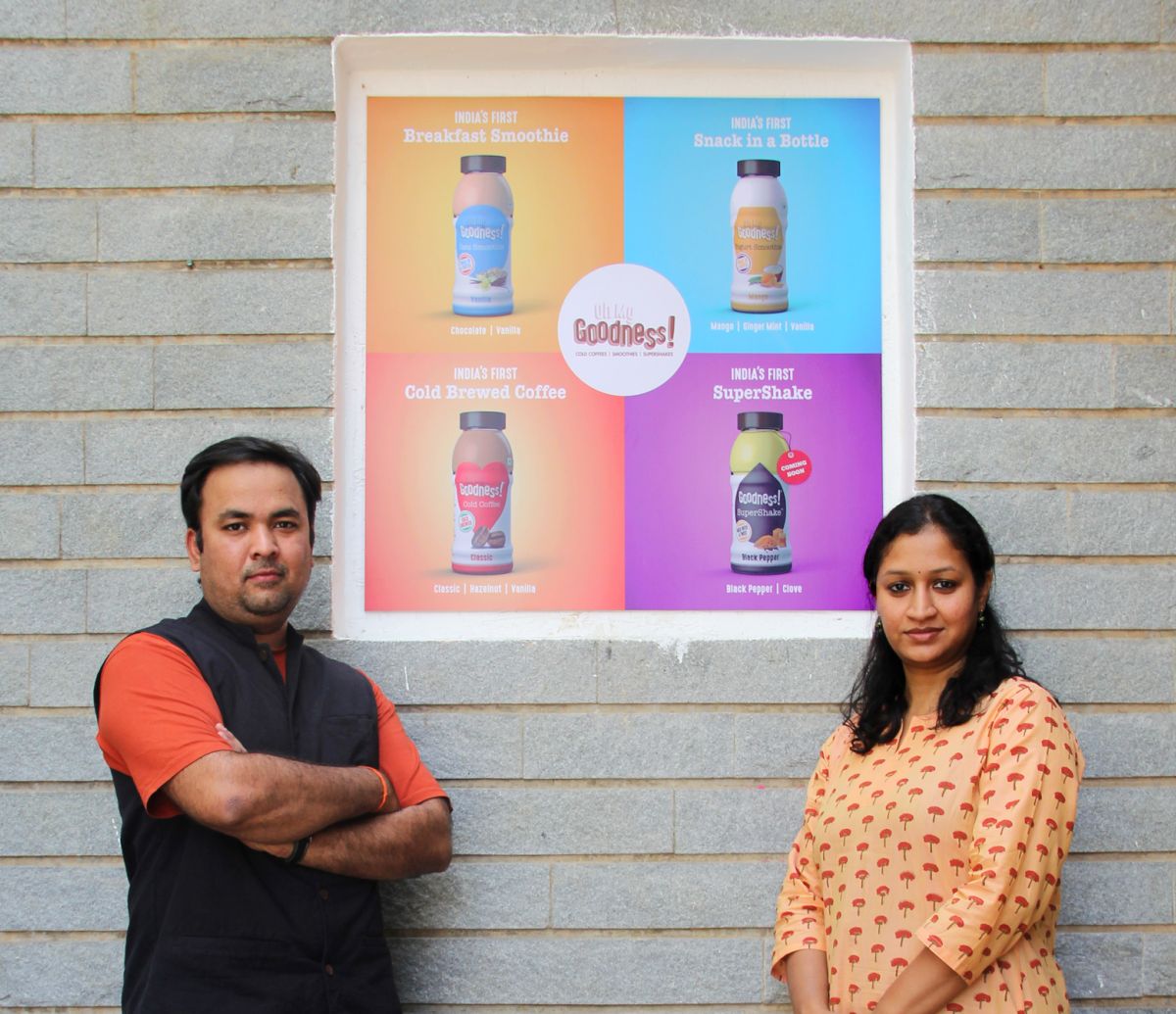 Their first venture Smarton (built along the lines of Udacity) was in the edtech space, based out of New York and India. “Smarton taught us a lot in terms of building a business in India. The first lesson being, don’t push the product in India. It won’t work. Wait for the consumer to come to you, it’s worth it.”

So, the practical way that Goodness! Beverages began operations was online, with a 25-30 member team, evenly divided between operations and production. The model was thus – a user could log onto the website/app, pick the beverage of choice (cold coffee, hot coffee) and place an order. The product would be delivered to the user’s doorstep such as homes or offices, wherever the need arose.

As per Chaitanya, the online-only model lasted for just nine months. In the first year of launching the website, the brand had amassed 15K customers in Bengaluru. It was also in August 2015 that Manish Singhal (co-founder of pi Ventures) invested $311.3K ( about INR 2 Cr) in a Seed round of funding in the company. In April 2016, the startup added $550K ( about INR 4.5 Cr)from Kanwaljit Singh (founder of Fireside Ventures) and Hitesh Oberoi (CEO of Infoedge, which runs Naukri.com), to its funding bucket.

The Goodness! Beverages team’s move from online to offline was gradual and well thought out. By April 2016, they were ‘productising beverages’ and moved the brand to offline channels. Other innovations that took place were in the areas of increasing shelf life, packaging and more. The products also began to be listed at major retail outlets such as Godrej Nature’s Basket, Big Bazaar, and Star City.

The reason for the comparatively smooth shift was the amount of research and learning that the team had invested in, prior to starting up. As per Chaitanya, they had spent about six months figuring out two things – sourcing recipes and market research on which ones were the most popular (black coffee turned out to be popular, as did cold coffee!). The other parameter of research was to understand and expedite the manufacturing process, competitive costing etc.

This kind of deep dive can explain the per unit cost of a single unit is INR 49 and INR 300 for the pack of six.

Chaitanya attributes the smooth platform transition to their learnings at Techstars with Smarton. “As a startup, we learnt to focus on only one thing and building a brand through position and building a pull product.”

As part of expanding brand outreach, the company also listed the products on fellow online retailers such as Grofer’s, Big Basket, Amazon, Swiggy and others. As of now, Chaitanya divulges that the brand’s retail footprint is available at close to 250 outlets across the cities it is operational in. The products are also available in Goa, Hyderabad, Delhi/NCR, Mumbai and Pune, as of now.

The third prong of their offline campaign consists of being part of events, especially startup events, where they could engage and connect with their target audience – the typically ‘woke’ customer who is health conscious, wanting the convenience of an online café experience offline.

“Our idea is to help our customer make easier and convenient lifestyle choices while providing value in a meaningful way,” he says. Chaitanya gives the example of a regular dairy consumer who is not aware of products such as low-fat yoghurt and smoothies. When it comes to converting them, the Goodness! Beverages team looks to provide a seamless O2O customer experience at an affordable price point.

At the moment, Goodness! Beverages lists a number of dairy products i.e. cold coffees, flavored shakes, breakfast smoothies (oatmeal smoothies are another crowd favourite), yoghurts on the platform. Chaitanya adds that the company is also entering the protein shakes segment to entice the serious health aficionados.

Chaitanya makes special mention of a particular vertical that the brand is pursuing. “HoReCa (hotels, restaurants, and cafes) consisting of malls, movie-plexes, college canteens, hospitals, and even corporate offices are our non-retail channels of engagement and PoS.”

Symbiosis: When Startups Help One Another

Goodness! Beverages has its eye firmly on the niche dairy and beverages business, which is currently worth $25.77 Mn.

But, being an FMCG startup, the company has also incorporated a philosophy of legacy business married to modern tech efficiencies. The thesis of recruitment is based on how enthusiastic a candidate is to working in an ever-changing, growing environment.

But, the company has also recognised the need to promote fellow entrepreneurs in the startup ecosystem, both to provide support as well as to avail of better costs.

For instance, Chaitanya reveals that the company utilises logistics startup Rivigo for deliveries. Talking about their marketing stack, Chaitanya says with a chuckle, “Our brand was built entirely on digital marketing. In fact, one of our earliest Facebook campaigns was to target office goers in Bengaluru where we gave them the first off, after signing up. 8,000 people signed up in over a month.”

The company utilises tech to ensure efficiency in backend operations – right from sales leads, PoS solutions and gather customer data. They have also built in a dashboard to analyse inventory in real-time.

Perhaps, this can account for the approximately 1 Lakh monthly users, derived across channels (offline and online). Chaitanya divulges that the number of monthly unique users is 50K.

As mentioned earlier, Goodness! Beverages does have competition in the niche dairy products space. But the market itself requires a lot of innovation before it can become saturated. “We have done the best we can in terms of creating meaningful value add to the customer’s life, in terms of availing a healthier, more convenient and affordable product. This is our main differentiator.”

As forward innovation is hardwired in the vision of a company that began solely online before successfully transitioning to the traditional FMCG spaces, the next step is creating an IoT (Internet of Things) solution for corporates and housing complexes – a vending machine that is stocked with Goodness! Beverages products and is specifically rigged to individual preferences.

With ambitious plans such as these, it is no wonder that the nascent startup is targeting $155.6K (INR 1 Cr) in monthly GMV over the next year.

India has always been an agrarian economy, from the time of the Indus civilization. Living off of the land – farming, agriculture and dairy farming – are ancient ways of conducting commerce. But, with the exception of a few notable names such as Aarey, Amul’s and Mother’s Dairy among others, product innovation has not taken place in the dairy sector, per se. Goodness! Beverages, with the unique philosophy of ‘bottling snacks’ and breakfast smoothies has managed to capitalise on a very crucial, way of bringing the industry into the Information Age.

The team is doing this by utilising tech efficiently across various business ops as well as by keeping innovation with changing consumer needs. While the startup has managed to gain critical mass in terms of users and is looking to breach the $155.6K (INR 1 Cr) barrier in terms of GMV, it does remain to be seen how well the company adapts to scale while combatting incumbents in South and pan-India as it continues to give consumers the ultimate online café experience.