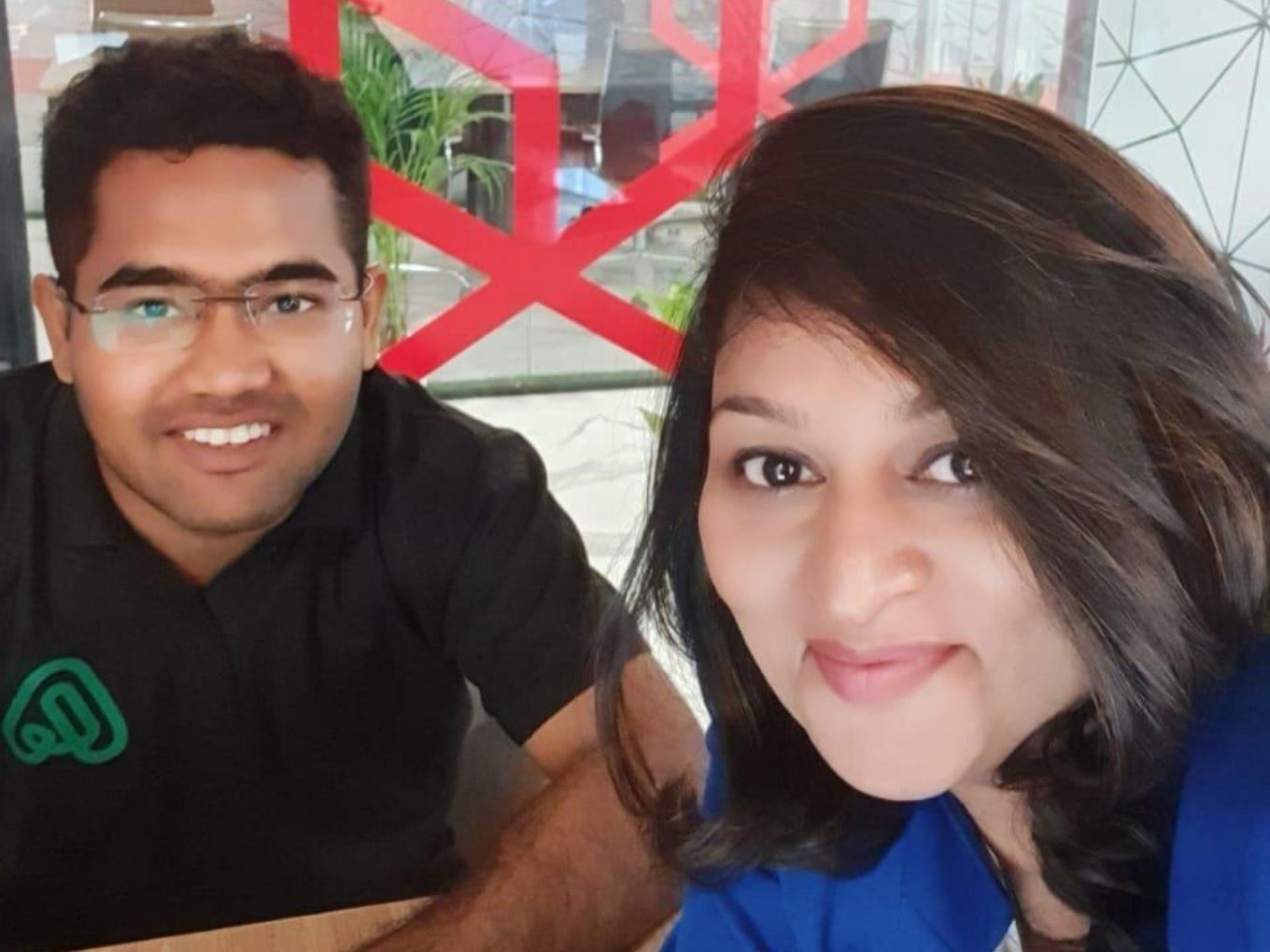 With ‘Superpowers’ assigned to children for completing tasks, AugLi is looking to build a sense of achievement beyond books and exams

Launched in March 2020, founder Anjali Tiwary claims 20% of its user base are already paid users

We are living in a fast-changing world. One week, we are talking about Jeff Bezos’s Indian tour and the next week international travel is banned around the world. Even before the coronavirus pandemic in February this year, technological advancements and disruptive business models have ensured that the employment landscape is changed every 5-10 years.

And so, comes the question of how we prepare children for the jobs, roles and problems of tomorrow that don’t even exist today. Educators and workforce experts claim that students need to be trained in 21st-century skills to sustain in the current information age. These skills are divided under three broad categories including learning skills (critical thinking, creativity, collaboration, communication), literacy skills (information literacy, media literacy, technology literacy), and life skills (flexibility, leadership, initiative, productivity, social skills).

Even though this is a well-publicised concept, the Indian education system continues to depend on rote learning and other age-old metrics of skill assessment. There are definitely some instances of workshops or summer camps that focus on nurturing 21st-century skills in students, but at large, there is no structured effort towards building these skills. That’s exactly what Anjali Tiwary and Kamal Kashyap are trying to solve with their new edtech startup AugLi. 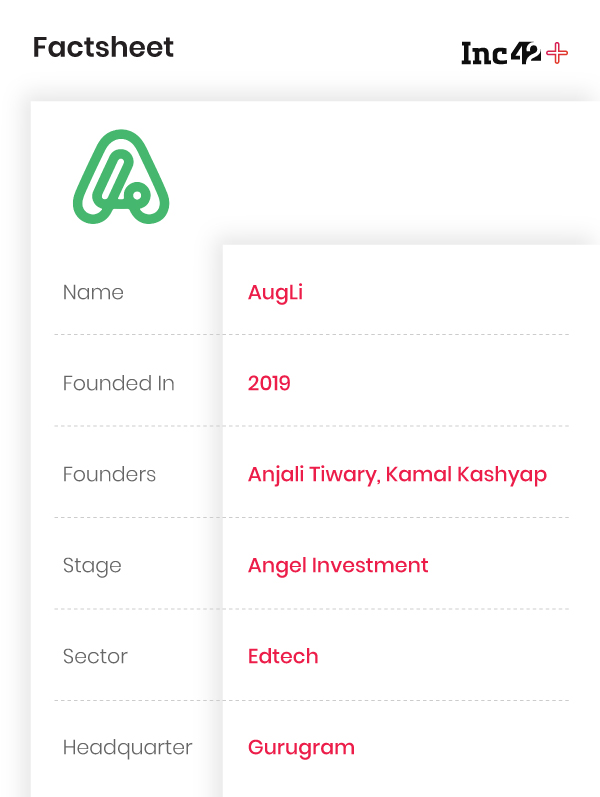 Tiwary realised this gap in the Indian education system while she was working with corporate giant Genpact. In her professional role, she was creating a virtual deal room to train consultants in out-of-the-box thinking skills. On the other hand, at home, she would shush down his son’s persistent queries about whether gravity is real.

She added that AugLi actually started from her own personal dissatisfaction of not allowing children to really build skills that are needed for their future readiness. “My son would say, ‘Mummy I have figured that gravity does not exist’. And I would say you have a physics paper tomorrow, so can you please memorise the definition and not discuss it,” said Tiwary.

Gurugram-based AugLi solves this by gamifying the learning experience for students, with help of quizzes and leaderboards. Each skill on the app has been bundled under a superpower such as News Surfer, Active Reading, Captain Precise, Magneto, and Debate Ninja among others. These superpowers can be won by children after completing various battles. 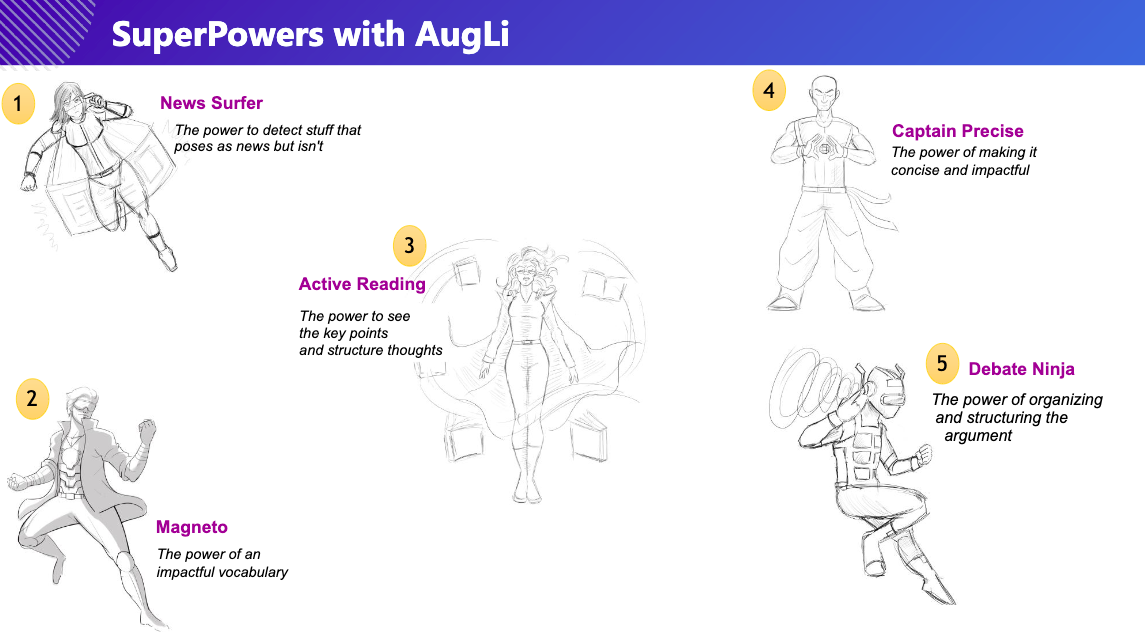 For each battle that the child completes, they earn certain points or ‘gold bolts’ that also determine their position on the real-time leaderboard. Some of the battles listed on the platform include word magnet (tests the child’s understanding of important words and their meanings), GK trivia, and fake stuff (children have to post screenshots of fake news that they see online to earn points).

Overall, the habit-formation aspect of the app is said to be working well for AugLi’s students. “Children tend to come back to the app to do a little task to earn X amount of gold points and then go back,” added Tiwary. Further, the average duration of a user session is around 12 minutes and the 30-day retention rate is a healthy 15%.

Most edtech platforms in India tend to lean towards English learning or the ‘Indo-Anglian’ audience Blume Ventures’ Sajith Pai defined Indo-Anglians as “a highly urban lot, concentrated in the top 7 large cities of India (Mumbai, Delhi, Bangalore, Chennai, Pune, Hyderabad and Kolkata) with a smattering across the smaller towns in the hills and in Goa.”

But the adoption trends for AugLi have shown equal interest for critical thinking skills from both Tier 1 and Tier 2 cities. “When I speak to a mother in Indore, she has similar expectations from her child’s education as someone from Delhi,” said the cofounder.

Since the app’s launch in March 2020, 30% of schools using the app are from Tier 1 cities while 70% came from Tier 2. Schools that use AugLi tend to take it for grade 5 to grade 10. Further, being a B2C product, only 40% of users on the app come through school partners and the majority 60% are direct parents joining based on referrals or invites from other users. Interestingly, the interest in the app from schools has grown by 50%, as schools desperately feel the need to offer value-addition to their students on top of online classes. AugLi’s monetisation plan includes an annual subscription plan of INR 3650. However, the premium modules that will have International Partners will be higher priced, added Tiwary. Out of the current user base, 20% of AugLi’s users are paying customers.

According to a World Economic Forum report, the most sought-after occupations or skills in today’s world did not even exist 10 or five years ago, and this rate of change is expected to accelerate in the coming years. Further, Scott McLeod and Karl Fisch also estimated in their viral video series “Shift Happens” that 65% of school children will eventually end up working in job roles that don’t even exist today.

Given this, there is a need for children to be able to apply their learnings to real-world situations, and understand their world and wander in it. Because innovation and curiosity are more valuable in the real world than bookish smarts. “In India, we are obsessed with academics but it doesn’t help children to get ready for the future. When technical knowledge is getting updated every three years then why are we fixated on children memorising stuff?” said Tiwary.