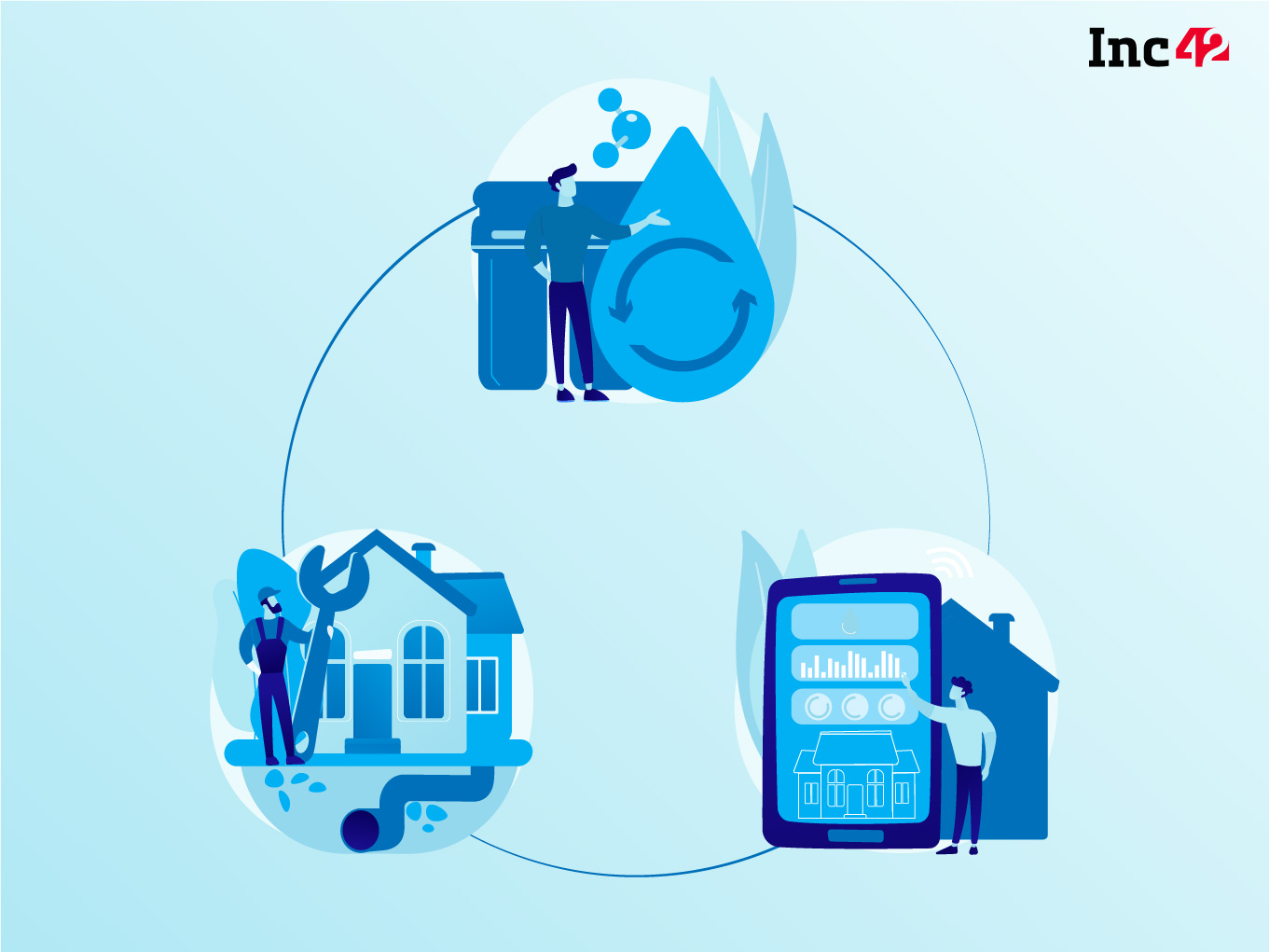 While India still doesn’t have a system of measuring granular water data, the need to have a centralised water data platform was highlighted in a 2018 report by Niti Aayog

While about 71% of the planet is filled with water, only 2.5% of it is freshwater, which can be used for consumption and utility. And in this minority, less than 0.01% is surface water, while only 0.5–0.75% is fresh groundwater or soil moisture. And on top of this contamination makes access to safe drinking water a huge issue — up to 50% of India’s 1.2 Bn population doesn’t have access to safe drinking water, according to a UN report.

Even the Indian government’s think tank Niti Aayog  said in its water management survey in 2019 that 70% of the country’s surface water is contaminated. The first step to solving any problem is knowing the shape and size of it. However, in the absence of real-time data about the country’s water resources, mapping the quality of this lifeline has proven difficult.

While the Central Groundwater Management Board does analyse water quality, it’s an annual exercise and the number of samples tested last year was just above 28,000. At a time when rapid urbanisation is driving tonnes of sewage into a city’s water bodies, mapping it for contamination shouldn’t ideally be any less rigorous than mapping air quality — which has been stepped up in recent years — or rain patterns.

DrinkPrime, a Bengaluru-based cleantech startup, is looking to tackle this problem through a data-driven model that blends a water purifier subscription service along with sensors to track a household’s water input and consumption in real time. The startup retrofits seven-stage reverse osmosis (RO) water purifiers with sensors that are synced with a user’s smartphone over Bluetooth. Meanwhile, the DrinkPrime app sends the consumption and other data from the phone to the cloud to track the usage and water input. 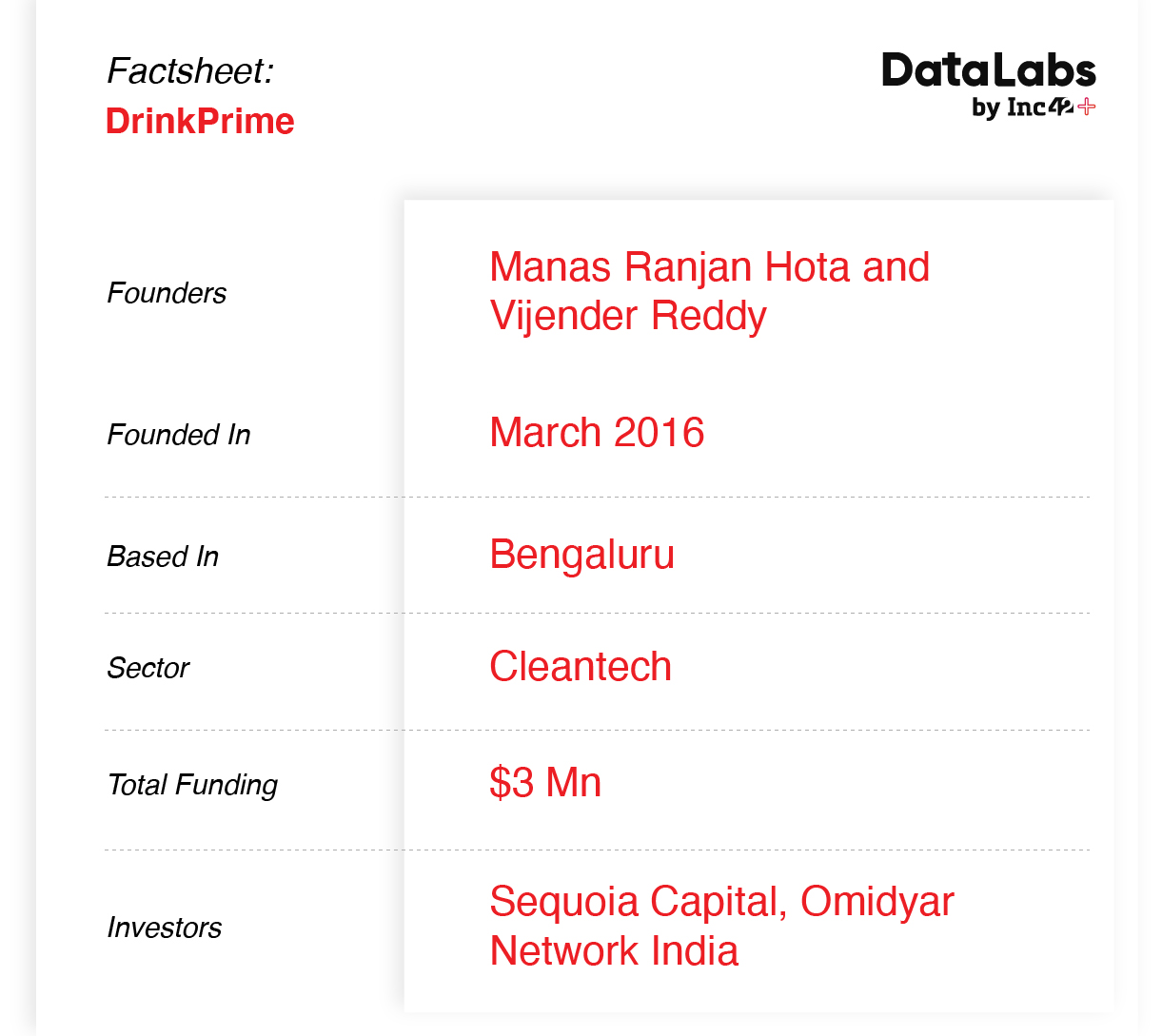 Founded in March 2016 by Vijender Reddy, an ex-AMD researcher, who has experience building both hardware and software from scratch, and Manas Hota, an MBA graduate who used to work in the software sector, DrinkPrime was born out of the common problem faced by both during their time as flatmates.

Staying in the same house in Bengaluru, the duo faced a lot of problems in getting drinking water supply. “Sometimes the bottle was dirty while at other times the water inside was dirty or the supply was always erratic,” recalled Hota.

Their initial reaction was not to build a water purifier but to understand what was causing the problem, which was being faced by all their acquaintances in the age group of 25-35 years. After primary research they surmised that 60-65% of the people didn’t opt for the maintenance package that was offered by water purifier brands.

They eventually realised that the way water purifiers were being sold — in the same manner as TVs and fridges — wasn’t ideal. “We figured out that both bottled water and a sales based approach for delivering safe water to the consumer were broken and we looked at solving why this is so,” the cofounder told Inc42. Traditional water purifier companies don’t know who their customers are. They don’t know about water quality and consumption. DrinkPrime not only tracks the input quality of water, but also keeps a tab on environmental and consumption parameters.

Hota added that DrinkPrime has been able to measure the water quality at an apartment level and at a community level in Bengaluru through its network of Internet of Things (IoT) enabled purifiers. “We are measuring the trends. It’s not like one day the level of total dissolved solids is 400 and the other day it is 600. The quality of water differs in Bangalore on a week-to-week, month-to-month basis,” adds Padhy.

While India still doesn’t have a system of measuring granular water data, the need to have a centralised water data platform was highlighted in a 2018 report by Niti Aayog. It says that such a platform will not only enable better policymaking but can also be opened to innovation through India Stack.

DrinkPrime has plans to collect data regarding water at a granular level that can be used to troubleshoot contamination problems at not only the city level but block and community levels too. Once they acquire a critical mass of data, they can help predict a lot of important water-related problems such as the drastic change in water quality as a result of changing seasons.

Any tech startup that works with the data that can track the daily habits of a household also needs to adequately secure the technology behind it. The company claims that the data which is sent from the IoT sensors to its servers is encrypted, which cannot be viewed without the decryption key. Further, the data stored in the IoT device inside the purifier isn’t very sensitive as it does not contain personally-identifiable information.

A user’s phone is connected to the purifier through bluetooth and even if the handset is lost there won’t be any issues, said DrinkPrime product and strategy head Rashmi Padhy. “You can take any other phone and connect it to the purifier and you will get connected again. Nothing gets lost over there,” he added.

DrinkPrime initially had the idea of connecting purifiers to phones with SIMs, but the startup realised that the kitchen in most homes was in an interior area and SIM connectivity was an issue in those spots. The second option was WiFi connectivity, but the company through the Jio 4G revolution might push broadband out of households, which has not quite happened.

So the alternative for DrinkPrime was a Bluetooth connection to the smartphone for data transfers and then ‘phoning home’ to send the encrypted data to the cloud for processing and analysis. 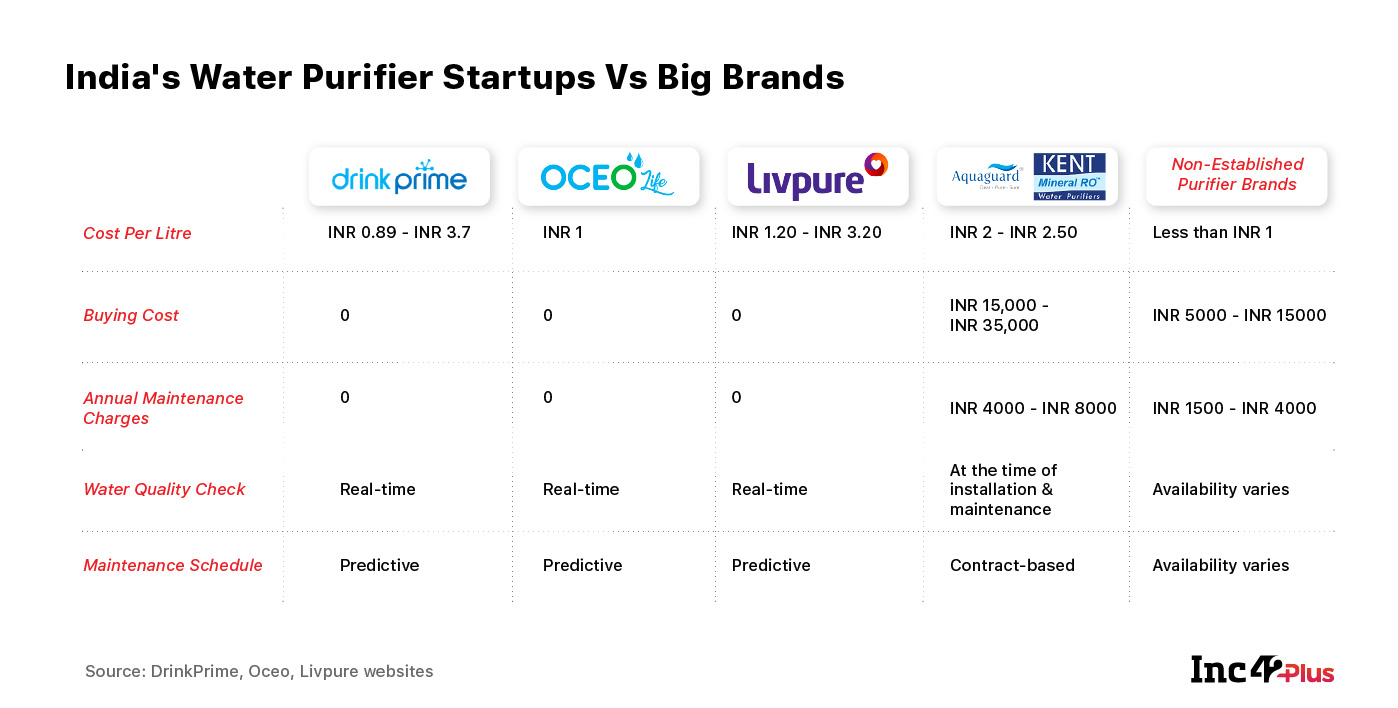 The backbone of DrinkPrime’s data play rests on its ability to drive adoption by households. According to Hota, the startup has seen a ten-fold growth in its subscriber base to around 25,000 over the past year. This rise came on the back of a customer acquisition strategy of zero cost on the purifiers and subscription plans that are cheap in comparison to bottled and canned water.

“We have kept our pricing keeping the users in mind. They are typically people like you and me who are not from Bengaluru and stay here in rented apartments,” said the cofounder. There are different subscription plans that the cleantech startup offers based on the size of a household and the quantity of water consumed and the cost of water per litre works out to be INR 2 to INR 3.7.

This is not the only player in this space though — startups such as Gurugram-based Livpure and Bengaluru-based Oceo also charge on a per litre basis for their smart purifiers. However, DrinkPrime claims to have launched its product before the two others. While DrinkPrime’s cost per litre across different plans works out to be between INR 0.89 and INR 3.7, the corresponding range for Livpure is INR 1.2 -INR 3.2 whereas Oceo charges INR 1 per litre.

Livpure has a funding of $16 Mn against its name but it’s to be noted that the company is present in the air purifier and AC segments too, whereas Oceo’s funding picture is not clear. In comparison, DrinkPrime has been backed by a $3 Mn funding round that was led by Sequoia Capital and saw participation from Omidyar Network.

Hota revealed, “This round was a pre-series round and for the next 6-12 months we would be looking at growing aggressively.”

The startup was looking to expand to three cities in the current year but the Covid pandemic led it to halt its plans. “We are not looking at a fund-raise in the short time horizon but somewhere in 2021 we would definitely look at a Series A,” he added.

The article was amended to change the pricing range of DrinkPrime after the company responded with new information.