Calling Itself As Chillr, This FinTech Startup Has Facilitated $38 Mn Worth Of Transaction In Just Over A Year

Calling Itself As Chillr, This FinTech Startup Has Facilitated $38 Mn Worth Of Transaction In Just Over A Year

Imagine a scenario where your roommate acts like a complete jerk and moves out the house without informing you. And on top of that, he asks to cough up his share of the security amount. Fuming in anger, you just want to throw the money onto his face and get over with it. However, on cooling down a bit, a wise thing came to your mind and i.e. you decide to transfer the money to his account.

However, you are still mad enough to talk to him or ask him his account details. Fortunately, for such situations, there is a cool app called Chillr that lets you “Keep Calm and Transfer Money”. With this app, you can simply transfer money from your bank account to your phonebook contacts, without having to know their account details.

The Cool People Behind Chillr

Many a times, people identify a trend in the industry and start their venture to capitalize over it. It was early 2012, when the founders of Mobme, a wireless solutions and value added services firm; Sony Joy, Vivek Steve Francis and Sanjay Vijaykumar founded the next opportunity in mobile.

“Mobme was growing manifold in these 4-5 years, in terms of sales and revenue. Yet, in terms of number, our growth was deeply constrained. We wanted to break free from this business to get into B2B2C market, where our reach and growth wouldn’t be constrained by monopolistic forces of the market,” said Sony Joy, founder and CEO at Chillr.

While they were doing a market study for the new solution, the startup dabbled with the ideas looking in healthcare, fintech and education domains. “We realised that banks have the highest traction. And having briefly worked with ‘National Payments Commission of India’, we knew what our next bet was.” he added.

They knew their next venture was a multi-bank platform, which would sit on the robust banking system and enable faster transactions. Next three months, they started bouncing ideas and polishing their product. The MVP was completed and ready by September 2013. But the official launch happened sometime in February 2015, since they required an RBI approval. The team utilised this time in re-testing the product, looking at the crucial aspects like technology, infrastructure and security. 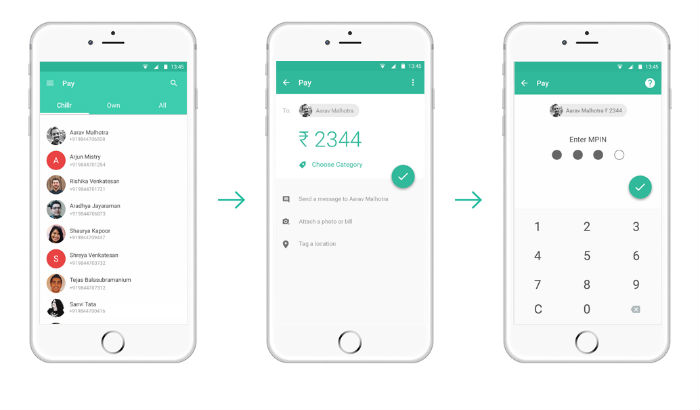 In order to use Chillr, all you need is a smartphone and of course a bank account. Users can sign up and link their bank accounts to the app. However, currently, only the users with accounts in “Chillr Partner Banks” can avail the full set of features offered by the company.

Once the registration is complete, users can send money to any Chillr user connected with any bank account in India. Users can select their friend from Chillr contacts, enter the amount and remarks, authorise the transaction using their M-PIN and the money reaches their friend’s bank account in a few seconds. All transactions are authenticated by the 4-digit MPIN issued by the bank.

Chillr has partnered with a number of Indian banks to enable the transaction. Users who don’t have accounts in Chillr partner banks can’t send money, they can only request and receive money from Chillr users with partner bank accounts.

During the transfer, there are no virtual wallets involved. This means that the transactions happen directly from the user’s bank account; which is safer and reliable.

Typically, a wallet takes 4% of every transaction; Chillr, however, has kept it free for the users for P2P transaction. For bill payments, it charges 1% per transaction which is shared between bank and the app. In other words, if a user pays INR 100 for a purchase, the merchant gets INR 99, while Chillr and the transacting bank share that remaining INR 1 which currently is the sole way of earning revenues.

Since inception, Chillr has witnessed a phenomenal growth. The app has received over 370,000 downloads from the Google play store and overall 460,000 transactions. Last week, it witnessed daily transaction going upto INR 50 Lakh and the overall value crossed INR 23 Cr.

So far Chillr has partnered with HDFC Bank but is in process to enable three more banks by the end of this month. As per the company, over 9000 transactions are done using Chillr app every day.

Going by the estimates, by end of this fiscal ending March 2016, it expects to take this number to 100,000 transactions, and bring around 15 banks on board. It also received RBI’s approval for these.

Funding And Road Ahead

Chillr has recently closed a $6 Mn funding round led by Sequoia Capital.

At present, the startup has enabled mobile and utility recharge, and it has already started partnering with offline retailers for payments. Customers can shop offline and pay using Chillr app, they can authenticate the transaction either by scanning the QR code from merchants phone or pairing their app using the 4-digit code.

This is what Chillr defines as their first leg in the innings. The next step is to connect ecommerce marketplaces like Flipkart and Snapdeal.

“We are in the process of creating network as strong as VISA. So about three years from now, we want to be the de facto banking app for entire country and two years further that, which 5 years from today, we aim to be the biggest financial big data company.” “Having said that, while we are not profitable yet, we are confident to reach there in fourth year,” Sony added.

A Quick Look At The Sector

According to a report by Ken Research, the digital payments market will be $120 Bn opportunity by 2019, driven by rising number of digital payments. It wrote, “The payment services industry grew at a CAGR of 142.9% during FY’2012 – FY’ 2014.” Interestingly, HDFC bank is the market leader in mobile banking followed by Axis bank, ICICI bank and SBI bank, in the second, third and fourthposition, respectively.

India has over a billion population, but only 19% of them have access to internet, and the percent of people using mobile for payments drops down to roughly 10% of the overall. Breaking this barrier has been the biggest challenge for this startup. According to the founder, around 99% of all the transactions are done in cash.

“We are not competing against other apps in mobile payment space, but cash,” shared Sony.

The business model of Chillr, though different in its own ways, draws similarity as a bridge between offline and online world. While there is no direct competition for Chillr, it would confuse a common person with a wallet or an online payments solution like Momoe or Ruplee.

The earlier version of the story had some errors, we apologize.