Can PlanetSpark Become The BYJU’S For English Language Learning?

In India’s crowded edtech market, PlanetSpark is targeting the career and skill segment, which starts from kindergarten to eighth-grade students

“Every edtech company has a breakout category, which drives 80% of its user adoption. For us, language learning courses have emerged as that category, based on our August 2020 numbers,” said PlanetSpark’s cofounder Maneesh Dhooper.

In India’s crowded edtech market with mega investments and exits being seen, PlanetSpark is attempting to find a niche in the English language learning space with a focus on K-8 students.

While English language learning courses and platforms are dime-a-dozen, Dhooper and PlanetSpark are looking at the edtech market in terms of three broad segments. One is the test prep segment which is dominated by players like BYJU’S and Unacademy. Second is digitisation of school tuitions for students in grade 5 to 12, which is again captured by companies like Vedantu and Lido Learning. And third is what he defined as the career and skill segment, which starts from kindergarten to eighth grade students.

It’s the last of the three that PlanetSpark is looking to dominate, where there is no big player except for coding and programming courses, which again is not a focus area for the startup. PlanetSpark offers multiple learning paths besides language learning (communication, reading, writing) including STEM learning (coding, robotics, mental maths, science lab), and creative arts (design, music, fine arts) depending upon their interest, need-gaps, and career aspirations.

“We position ourselves in the English language learning segment which is still up for grabs. In this segment, we focus on students who know basic English and want to acquire excellence. We estimate that there are roughly around 15 Mn kids who have the paying capacity in this space. So from a market perspective, it is large and it is still a blue ocean,” Dhooper added.

Around 40% of its users of the platform come from Tier 2 and Tier 3 cities in India, 20% from Tier 1 cities, and another 40% are from metros, while the rest come from international markets. The user demographics targeted by the company include middle and upper income households.

The primary acquisition channel for PlanetSpark is a free video-centric language learning platform PlanetSpark TV. Every evening, the company offers these free classes with the vision that when you give something valuable to the users, it builds their trust in the platform and that’s what drives user adoption. It also serves as a trial class for parents to gauge the service quality that we will get on the platform.

The company also collaborates with schools to acquire users, wherein either the school hands over the entire language learning training to PlanetSpark or recommends the platform for kids to use for after school learning. 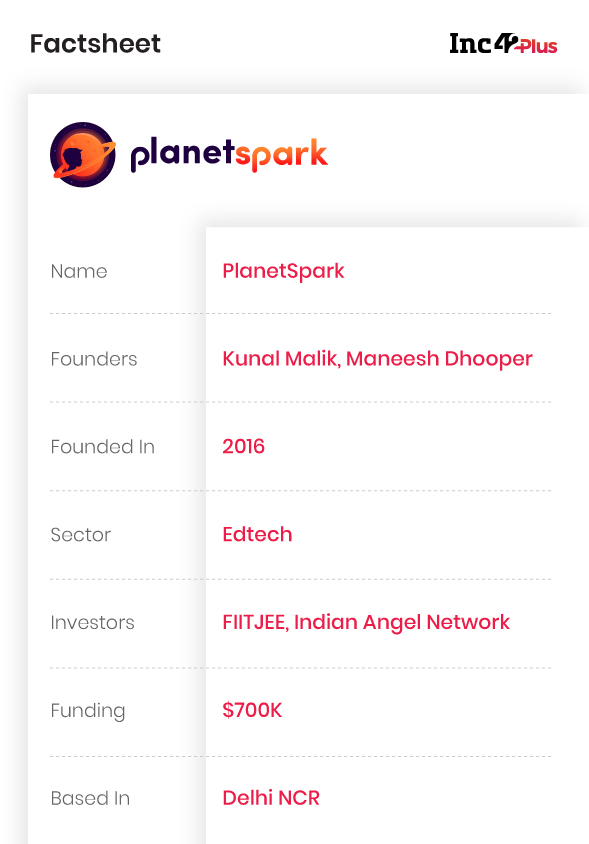 In the case of international markets, there are two sub-segments — one is a native English speaking market and the other is ESL (English as a second language market). Native english speaking market would include countries like the US, Canada, UK and Australia. The reason for growth in these markets include their poor performance at PISA rankings (which means their reading and grammar levels are very low) and the high cost of personalised tuitions in these countries.

“Personalised tuitions are impossible in these countries because the cost of tuition is very high. I have personally lived in Switzerland for two years, and I used to make around 3000 to 4000 Swiss francs a month simply by being a private tutor, because you know the premium is immense,” said Dhooper.

In addition to learning reading and grammar, international students also use the platform to learn creative writing and public speaking.

Further talking about ESL markets (English as a second language), Dhooper noted that these markets look at English as an aspirational thing and are very similar to India. In countries like Switzerland, Germany, or the Middle East, English brings them upward mobility and opens doors for international careers. And hence, these countries have a greater demand for public speaking courses, followed by creative writing and reading.

Interestingly, 25% of PlanetSpark’s revenue comes from international markets including North America, Europe, Middle East, Australia and more. Going by the consistent rise in demand for live courses, the company expects international markets to make 40% of their revenue share by the next quarter.

PlanetSpark was founded by Kunal Malik and Dhooper in 2016. Since then, the company has raised $700K in two rounds of funding from investors like FIITJEE, Indian Angel Network, Lead Angels and Hyderabad Angels. The company claims to have 50% month on month growth in revenue.

Average lifecycle of a PlanetSpark user is estimated to be 18 months, because of the learning paths created by the company for each learning goal. According to Dhooper, the distinct advantage that PlanetSpark has being a language learning company is that language learning is not like a big data course which gets completed in one course. “It is a multi-faceted process and there are multiple aspects to it. So whenever somebody joins our platform , we enrol the child in a curated learning path based on their learning goals,” he added.

For any online learning platform, it is crucial to ensure the quality of teachers. In the case of PlanetSpark too, the quality of personal tutors is a significant aspect. The company vets its tutors through an online test called PlanetSpark aptitude tests and around 5% of the applicants actually qualify the exam, which then undergo interviews to be finally onboarded on the platform. The company also takes these teachers through a tech-based training program.

Teachers are paid depending on the hours that they teach on the platform, which is roughly around five hours a day and six days a week. The income levels generated for these teachers is  between INR 40K to INR 50K in a month.

“By spending about half the time that these teachers spend at the school, they are able to get about a 30% to 40% hike in their school salary. So, the return on time invested is immensely high for the teachers,” noted Dhooper.

Talking of future plans, Dhooper said that the company is focused on capturing the huge opportunity in the language learning segment of India, where there are no large players yet. He added that language learning can also go beyond K8 to include young adults and young professionals.

“We are clearly on the path to become like a very large dominant player by mid of 2021. We’re already seeing around 50% month on month growth, both in terms of our users and revenue numbers. We want to do in English learning segment, what BYJU’S has done in the test prep,” said Dhooper.