Can Jaipur-Based Kirana King Become The OYO For Kirana Stores In India?

Can Jaipur-Based Kirana King Become The OYO For Kirana Stores In India? 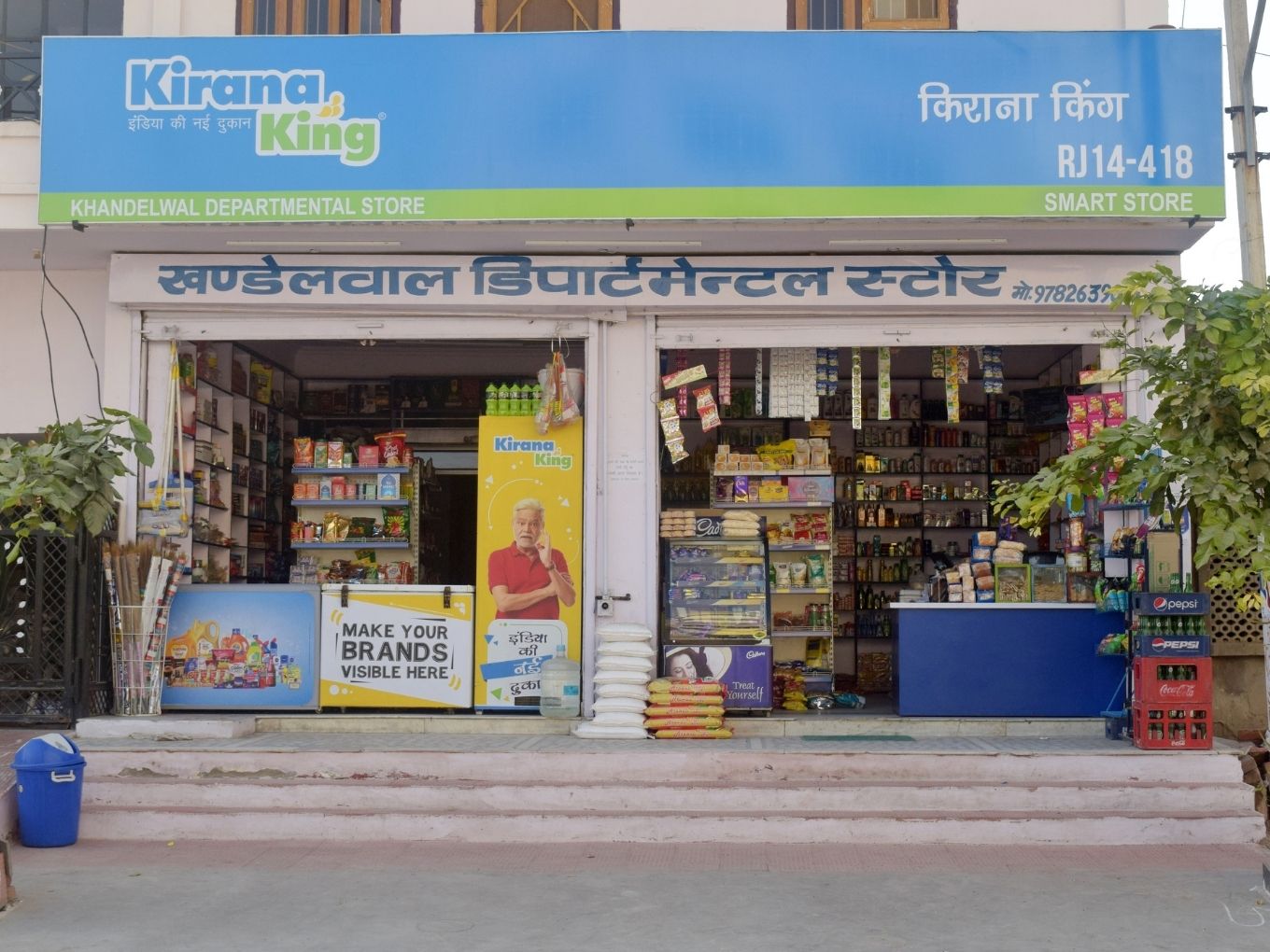 Currently, Kirana King has transformed close to 200 stores in Jaipur and looks to touch 7000 stores across 14 cities in the next five years

Backed by RVCF, Kirana King looks to raise $10-12 Mn in the coming years to attain a reasonable market share by 2025

Two decades ago, kirana (grocery) stores in India successfully transformed themselves to take on the supermarkets and hypermarkets like Reliance Fresh, More, Big Bazaar, and Dmart. Despite the economies of scale of modern, large-sized brick & mortar retailers, kirana stores were able to provide value for money to customers that helped them retain their market share against organized retailers.

But in 2021, there’s a new challenge for Kirana stores in the country. The fight this time is from online grocery players like Big Basket, Grofers, Nature’s Basket, and RelianceSmart among others. The value proposition being offered by online grocery companies is ease of ordering online, home delivery, and discounts on large orders.

This is where Jaipur-based Kirana King sees an opportunity. The retail tech startup offers a complete transformation of kirana stores within three to four days, helping them adorn the look of modern-day superstores, thereby improving infrastructure, hygiene, and feel of their shops. But in the digital age, looks are not the only thing that matter to customers. They want ease of making payments as well as getting deliveries.

Hence, Kirana King also focuses upon revamping the entire distribution channel of kirana stores, integrating technology-enabled solutions for digital payments, inventory management, and assortment. “With this, we increase the average revenue for retailers by 20-30%, and some as high as 50%,” claimed Anup Kumar, founder and CEO of Kirana King.

Kirana stores in India have their own resilience. It was quite visible during the pandemic, when only the neighbourhood kirana store owners could ensure supply of daily essentials for over a billion people, as the entire country went into lockdown, making it difficult for online grocery players to ensure timely delivery of goods.

Retail accounts for almost 11% of the country’s GDP and employs more than 8% of the workforce – and 88% of the sector is unorganized, as per Accenture’s ‘Kirana Transformation In India’ report. Experts believe that the unorganized players will require modernisation, adoption of technology, financial access and employee upskilling to take on the big online grocery retailers.

Kirana King started its retail aggregation operations in 2017, where it took about a year to pilot test its ‘asset-light grocery retail business model,’ converting close to 30 kiranas in Jaipur in the first year. Cut to 2021, the company has a network of more than 200 stores in the city.

By the end of this year, the Kirana King plans to have 500 stores under its umbrella.

Prior to selecting the kiranas for transformation, an in-house business development team studies the location, demography, and size of the store. Apart from this, the company also assesses owners and gathers offline data like store upkeep and FMCG stock wallet share among other feasibility checks.

This model is said to enable kirana store owners to upgrade their traditional stores to superstores, without having to invest. For customers, on the other hand, it offers ‘organised shopping experience,’ similar to large format retail stores like Reliance Fresh, Aditya Birla’s More and other supermarket chains. The average size of the Kirana King store is about 500 sq. ft.

While corporate-backed supermarket chains-present in tier 1 and tier 2 cities run on the franchise model, Kirana King thrives on helping retailers to retain the ownership of their stores, without having to spend anything upfront, besides managing the store and earning income.

Kirana King is also working on a ‘Click & Collect’ model, where customers can order from the comfort of their homes, with an option of home-delivery or pick-up from the store directly. The hybrid model of delivery will ensure visibility and customer footfall, along with creating additional revenue streams for stores.

How Much Does It Take To Transform A Store?

Kirana King told Inc42 that it invests close to INR 70-85K per store, which includes revamping of the store, setting up of the technology infrastructure, labour cost and managing the distribution channel. However, the company earns its revenue through brand partnerships, private labels, and commissions from marketing and advertising of products at the Kirana King stores.

In the coming times, the company looks to charge monthly subscription fees to retailers and also explore the franchise model for new owners. It is also looking to partner with online grocery, hyperlocal startups and kirana aggregators like Dunzo, Swiggy, Zomato and others to list Kirana King stores onto its platforms, thereby increasing reach and visibility of its stores.

Besides Kirana King, other players in the space also include Walmart (Mera Kirana), Metro, ShopX and others, who have been pivotal in modernising kiranas and upskilling store owners to generate more income.

For instance, both Metro and Walmart’s Mera Kirana initiative offers discounted products to retailers and advises them on various aspects of using low-cost modern techniques and processes, including assortment planning, layout and fixtures, displays, backroom, licenses, safe food handling, customer retention and other services. ShopX, on the other hand, provides access to eCommerce through its retailer network.

“Our B2B distribution technology, logistics and approach are a bit different than peers,” said Anup Kumar, stating that it provides an end-to-end solution and offers more options to retailers in terms of brands and delivers supplies within 24 hours. “Also, our tech has been built in such a way that we can design the product catalogue for each and every store differently as per hyper-local need and approach,” he added.

The company did not reveal the names of payments and logistics vendors, however, Kumar said that they had tied up with some of the regional brands like Bhikharam Chandmal Namkeen, Rufill Ghee, Mulberry confectionery, Manwar Papad, TANSUKH Atta and others. The deal requires retailers to push these brands on Kirana King stores. It helps create consumer pull for these brands through various branding and marketing activities.

Does The Unit Economics Of Revamping Kirana Stores Make Sense?

But Kumar has a different take. According to him, their business model is Opex intensive, and not much capital intensive as it is fully asset-light both at front-end and back-end supply side. “Capital is one time, on the shop facelift, which easily has a lifetime value of three to four years,” he added, pointing at other tech-based startups who tend to spend a lot of money on consumer acquisition.

At present, several startups are also enabling retailers to increase their productivity and reach by developing technology solutions. Some of the notable startups in the space include Dukaan, Khatabook, Snapbizz, ShopKirana among others.

Kirana King’s Kumar said that grocery retail space is very large and needs multiple players to empower this ecosystem. For us to get a reasonable presence/market share in the next four to five states till 2025, we need at least $10-12 Mn. “Our profit matrix is city-level operations, and each place where we operate can turn profitable within a two years’ time span,” claimed Kumar, stating that the company will be profitable by FY22-23, earning an average gross profit of INR 10K per month from each Kirana King store.

Kirana King told Inc42 that in the first financial year it had onboarded close to 110 stores and made revenue of about INR 15 Cr in FY19-20, and in the current financial year, the company looks to earn close to INR 45-50 Cr. “We look to expand to about 7000 stores across 14 cities in the next five years,” concluded Kumar.