As Assistive UI Comes To The Fore, Jiny Aims To Erase Adoption Hurdles Among India’s ‘Next Billion Users’

As Assistive UI Comes To The Fore, Jiny Aims To Erase Adoption Hurdles Among India’s ‘Next Billion Users’ 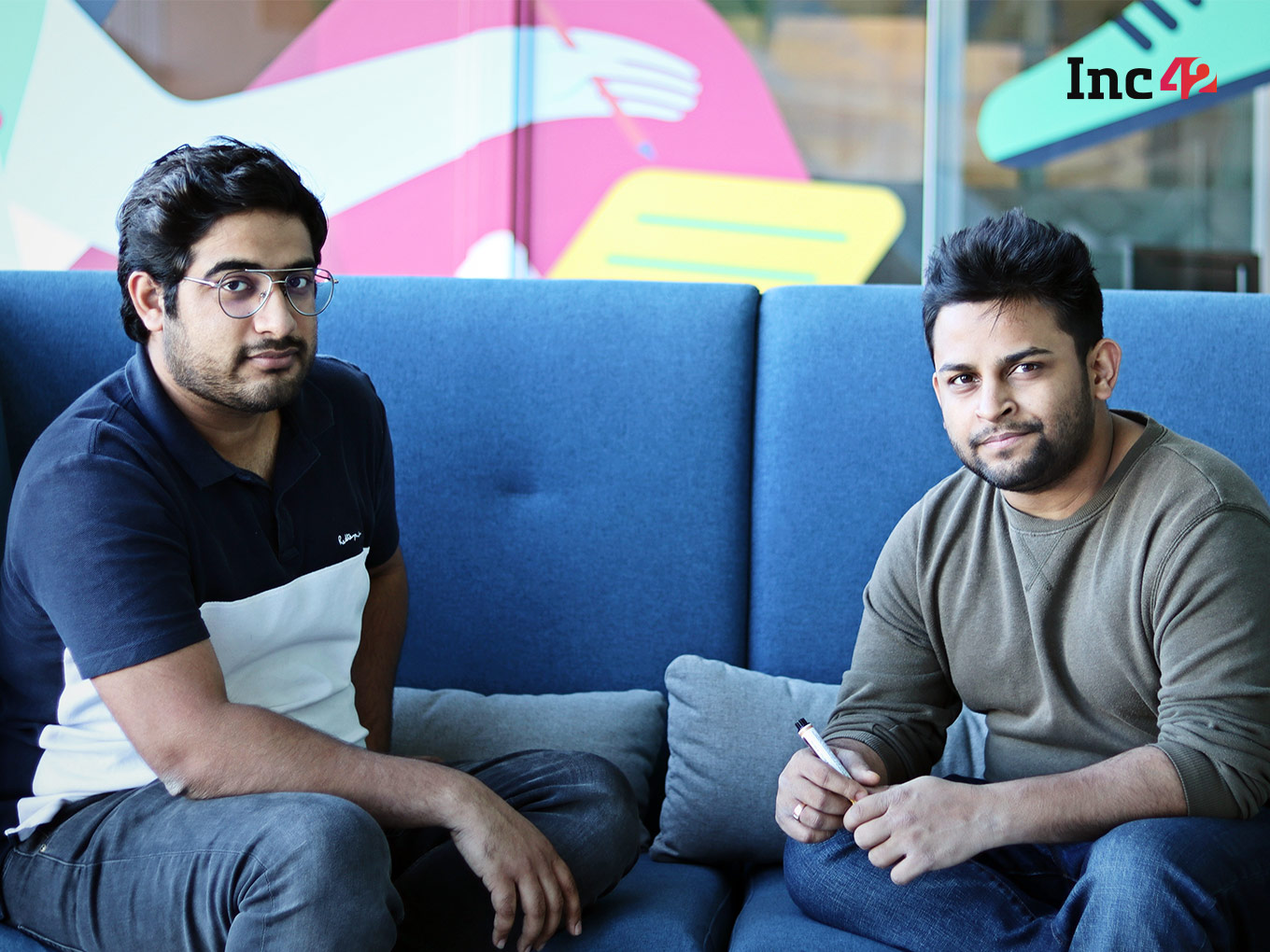 Founded in 2017, Jiny aims to solve the problem of app adoption and usage through human-like assistance within apps for novice users

Starting with the MyJio app, Jiny now has a wide client base in the fintech, ecommerce and travel sectors and is looking to expand outside India this year

Jiny’s SDK allows apps to easily enable assistive UI technology, and the company has scaled up its operations with just 15 employees thanks to partners such as AWS

Internet penetration in India has increased multifold in the last decade thanks to the proliferation of smartphones and 4G data. But despite this huge improvement in internet penetration, the gap between access and adoption is yet to be bridged. Experts believe that the Indian internet user base, primarily in rural and semi-urban areas, is not mature enough to use apps that are designed for the more sophisticated users in metros

This set of apprehensive or new internet users are not just seen in the rural base, but also in cities, where older millennials feel intimidated by complex user interfaces (UI) and poor user experience (UX). Software specialists Sahil Sachdeva and Kushagra Sinha saw this challenge as an opportunity and launched Jiny in 2017.

The startup seeks to solve the problem of adoption through human-like assistance within apps for novice users. The assistive UI platform has become something of a game-changer for apps and mobile games in just over a year after launch.

Jiny Assists The Next Billion Users

CTO and cofounder Sachdeva began his career as a software developer with Flipkart and this is where he met Sinha, who worked as a UX researcher at the ecommerce giant. The idea of starting something like Jiny was conceived due to a study conducted at Flipkart that aimed to analyse the barriers in digital adoption for people in India. “We did a study in Lucknow where we asked people on the railway platform why they preferred standing in a queue to booking tickets online,” recalls Sachdeva.

He and Sinha later participated in an internal hackathon that focused on addressing the issue of digital literacy, and that is where the idea for Jiny germinated. 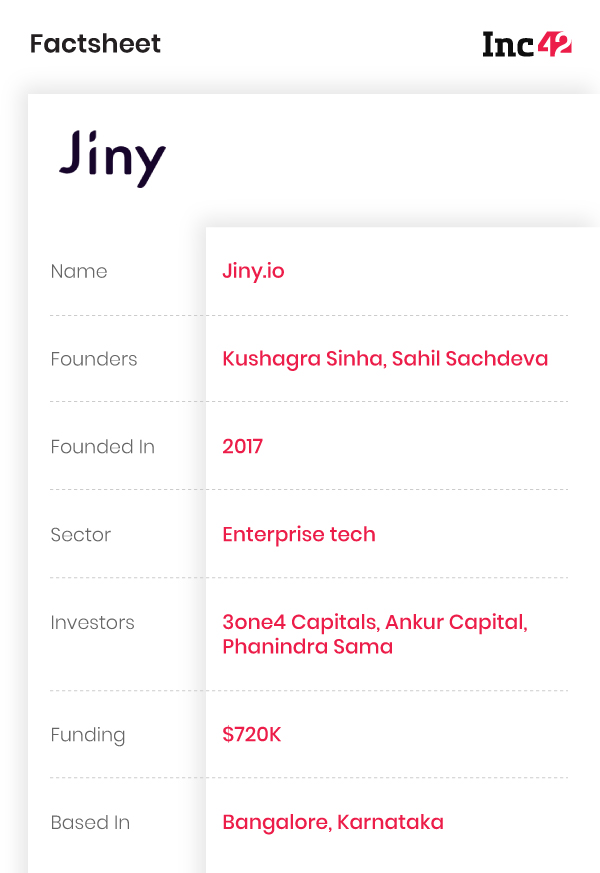 Interface complexity reduces adoption rate even with consumers who are otherwise the perfect target audience for apps. “I feel that this problem exists even for my parents. I come from a family of doctors. They use high-end smartphones but hardly know how to use apps other than WhatsApp,” says Sachdeva, stressing on the need to assist even an audience that may not be seen as non-tech savvy .

Jiny’s launch happened in July 2019 after two years of development, market research, interviewing potential customers and identifying barriers for such assistive UI platforms. The founders also studied other platforms in the same domain, which sometimes had different use cases to achieve the product-market fit. “The major difference [between existing platforms and us] was that we were on mobile, and it is difficult to create technology for mobile phones as the real-estate is very small … Our work was centred on building the technology, the product and the core foundations of the company for the initial one-and-a-half years,” says Sachdeva, explaining the long gestation period of the product.

Jiny belongs to a relatively newer class of tech startups, called assistive user interface (AUI) solutions, which differs from the conventional graphical UIs in the sense that all user interactions are assisted by the app itself through cues and indicators.

The company’s first client was MyJio, which was a major source of new customers. The clientele has since expanded to include big players from the banking and financial services industry, travel and ecommerce sectors, where apps have a digital adoption or user-onboarding problems. The next billion internet users are the common target for these apps, reaching whom, Sachdeva claims, is Jiny’s goal too.

Businesses like OkCredit, which provides documentation and ledger services to neighbourhood groceries, Frontier Markets, ShopX and other retail tech platforms also use Jiny’s AUI platform. “The focus has been on sectors that can provide value to end users. By ‘value’, I mean payment and onboarding,” says Sachdeva. The startup is also looking to expand globally in the next few months into other developing markets, like Africa, Latin America and Southeast Asia.

The Need For Always-On Assistance

“Jiny is like Google Maps, but inside the app, the user just has to do what Jiny is saying without having to comprehend anything,” says Sachdeva.

Given that in the Indian context, millions of new users have come online in the past couple of years, the need for startups such as Jiny is ensuring continuous operations and not breaking the experience for any user due to limitations of scale. 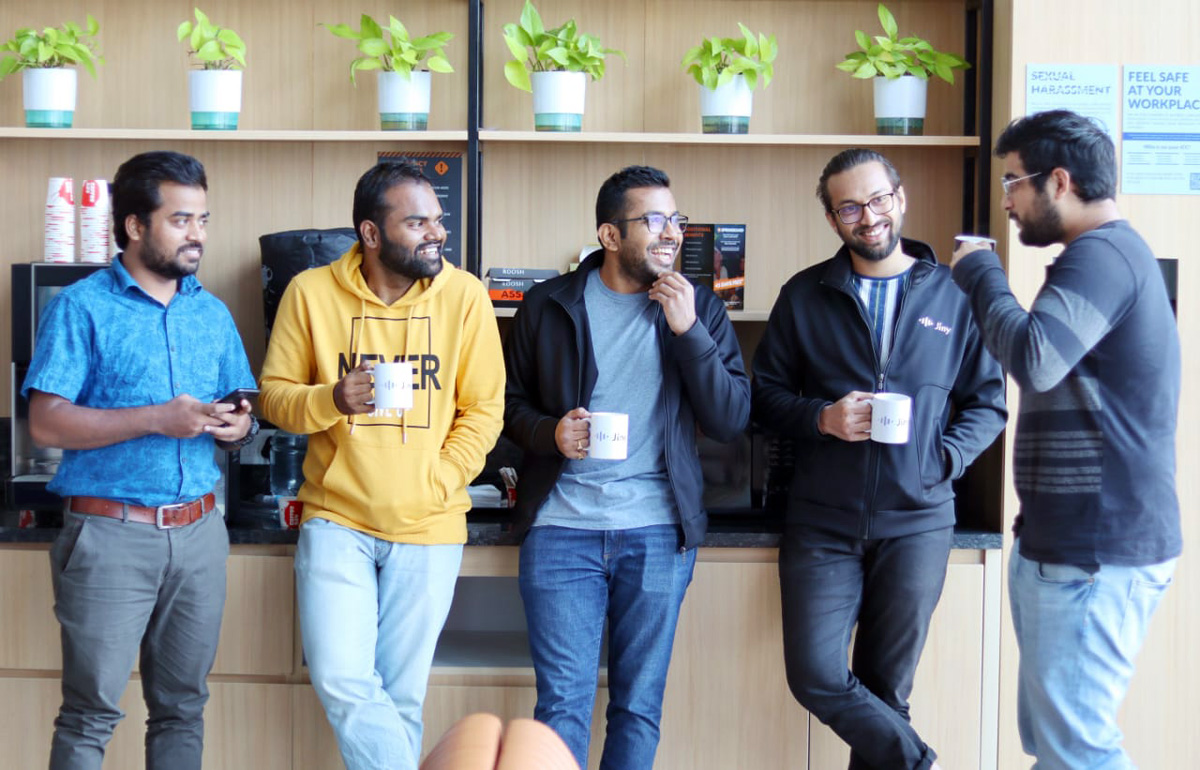 The user experience instances on the Jiny platform are preconfigured for any type of workflow that the client wants to target. The languages and sound files are also preconfigured, which allows any number of languages to be added to an app user interface. A developer is required to integrate Jiny’s software development kit (SDK) into the app, and the AUI experience can be enabled without adding any extra code. The experience is curated entirely by Jiny at the backend, and the SDK takes care of the hand-holding the user needs on the app, using AI-based recommendations for new users.

Sachdeva recounts how AWS has been a boon for Jiny since inception, and a crucial lynchpin given this approach via an SDK. “We have posted all our production on AWS and catered to millions of users using the services. The biggest benefit is that we do not need a DevOps person on the team and don’t have to manage our own infrastructure.”

Jiny’s SDK constantly interacts with AWS to assess what to configure for the application. Apart from that, the Jiny team also uses Amazon’s suite of cloud computing technology to provide rich analytics to its customer apps. This lets them gauge the performance of Jiny’s services within their apps, thus letting them assess the value Jiny brings in. The CTO says that AWS also takes care of scaling up an app’s services in an efficient and cost-effective manner, which is crucial for early-stage ventures.

Apps using SDKs are known to face security and privacy threats, since not all SDK providers practise privacy ethics. But Sachdeva says this is not the case with Jiny given its data-less approach. “The Jiny SDK does not capture any user data. Unique users are identified based on their device IDs, and location data, which only records generic information, such as the state where the user is present, is captured for A/B testing.”

For the sake of transparency and to reassure clients, Jiny leaves a copy of the data it captures with the client and it allows the client to periodically check what data is being sent to the Jiny servers to enable complete an open environment.

The Worst Of Covid-19 Is Over For Jiny

Through 2020, new users and customers flocked to apps and software solutions as part of their digital transformation journey. While new users latched on to ecommerce apps and essentials delivery services, small businesses turned to SaaS platforms, financial services apps and loan platforms to navigate the crisis. Jiny saw growth during this period thanks to the adoption of these services, while critically-hit sectors slowed down in terms of user activity.

The Jiny team, which is now 15-member strong, faced a period of adjustment during this time. Businesses from the ecommerce and travel sectors are a significant part of Jiny’s customer base, which had to curtail operations during the lockdown. However, the company has maintained a high-touch relationship with all its clients and is now looking forward to capitalising on the edtech and BFSI sector boom that emerged during the lockdown. 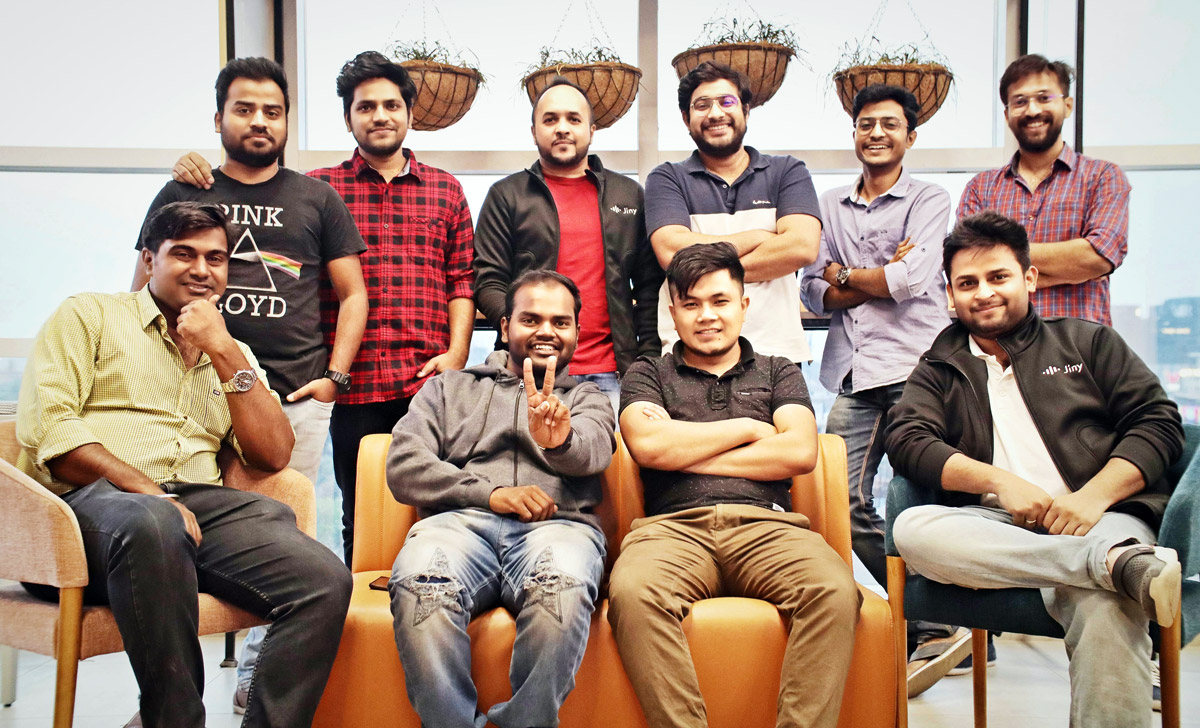 “A lot of the companies that went on survival mode are now coming back. We are getting a lot of traction from them,” Sachdeva said. As the movement restrictions are easing, things are coming back on track for Jiny, which uses a subscription model for its SDK distribution.

Business for online travel startups have been steadily picking up since Covid-19 restrictions have largely been lifted in India and several other countries. In December 2020, Ixigo cofounder Aloke Bajpai had said that the number of flyers has been increasing since July and with up to 55% pre-Covid demand back in flight bookings, and around 1.5 Mn people travelling by train every day.

Jiny is looking to capitalise on these revivals. Sachdeva believes that this model can play a significant role in making apps generate revenue as well as drive engagement, which are both key metrics for startups in India. More important he thinks is the role that Jiny can play in making apps and the internet less intimidating for the next billion users.

While working with large internet businesses in India, the company states it has gathered deeper understanding into mobile engagement and adoption space over the last few years. With new insights and learnings, Jiny is currently working on its new product called ‘Leap’. Leap is an advanced version of Jiny.io and is building a no-code platform for mobile applications to help clients with in-app engagement, retention and create better impact with their products. The company is currently running an early access program for Leap.