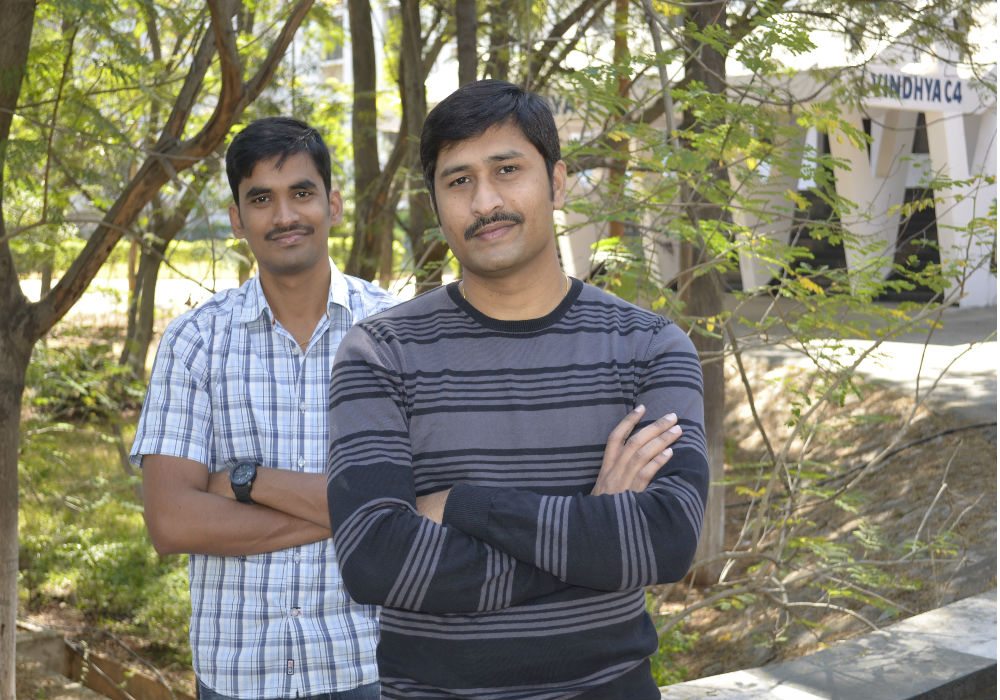 Worldwide mobile app downloads are expected to reach 268.69 Bn in 2017. Marketers are now seeing apps as a medium to reach masses with a lightning streak. With more than 3 Mn apps currently floating around, the brother duo of Ram Papineni and Laxman Papineni thought of seizing this billion dollar opportunity when they launched AppVirality in 2015.

Working with a team of 12, AppVirality offers a plug and play growth hacking toolkit for mobile apps which eliminates the need to code. Marketing professionals (without any coding knowledge) can thus use AppVirality’s DIY dashboard by selecting growth techniques and implement them as per their requirements.

AppVirality founders began their journey with a team of five and 250 beta sign ups. They initially reached out to app developers with A/B testing and in-depth analytics to help businesses gain insights into meaningful data.

Since then, there was no looking back. The company closed the year 2015 with 5 Bn+ API calls, and generated 8.3 Mn app invites by users, leading to a total of 3.34 Mn installs. The team brought a revenue of $2.41 Mn to its users, locking in more than 39 Mn user profiles.

Since its inception, the startup has managed to sign up over 300 customers spread across India, Australia, and SE-Asia. It has also been successful in generating over 6 Mn organic installs for its customers. Some of its prominent clients include MakeMyTrip, BYJU’S, YepMe, Zippr, Quikr, and Housejoy, among others.

The year also marked two rounds of funding for the portal, viz. a seed round of $465K in January 2015 and a second round of funding of $500K in November 2015. The company is now backed by some of the prominent angel investors including Rajan Anandan (Google India), Mike Galgon (aQuantive), Ravi Gururaj (NASSCOM), Ashim Mehra (Baron Capital), Mohit Saxena (InMobi), India Internet Group, TNN Capital, etc.

On the international front, the startup is also working with Rocket Internet in different countries. In May this year, it revamped its dashboard to get a clean interface and enhanced functionality.

As per Laxman, the last six months have been a whirlwind, a mix of learning and acquisition, marked by enterprise customers from various sectors. Some of the interesting categories include dating apps (Truly Madly), wallet and finance apps (MobiKwik) and restaurant category (FreshMenu). “The level of customisation that we’ve offered to these brands has also helped us to explore the flexibility of our own product. This is one of the best learning for us,” he added.

Growth Hacks For Increasing And Retaining User Base

In-App Referrals: AppVirality provides fully automated, personalised and customisable app referral programmes to help boost a brand its app installs and engagement. It is one way of making existing users bring their family and friends on board.

“Word-of-mouth marketing is 92% more effective than any other type of marketing. And when it comes from our friends, family, and others in our network, it is often valued more,” said Laxman. He further adds, ”Since our buying decisions are based on opinions, which in turn are an extension of trust, there’s no better way than an in-app referral programme to bridge this gap and excite your new users.”

He further explained this by citing an example of online travel portal MakeMytrip, which has been associated with them for the last one year. Here are some screenshots of the travel portal’s recent referral programmes. 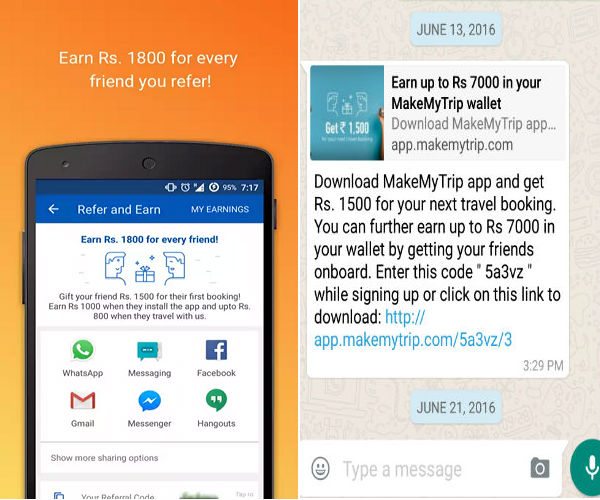 Post this integration, MakeMyTrip’s conversions went up by 25%, transaction rate increased by 20% and overall download rate increased by 20%. “While offline marketing may garner a user’s interest in an app, in-app growth hacks will ensure meaningful engagement with the app. In the long run, it ensures sustained app downloads and promotions,” said Laxman. Referral programmes further helps app developers in boosting an app’s image, bringing more focus on the app and persuading users towards purchase. 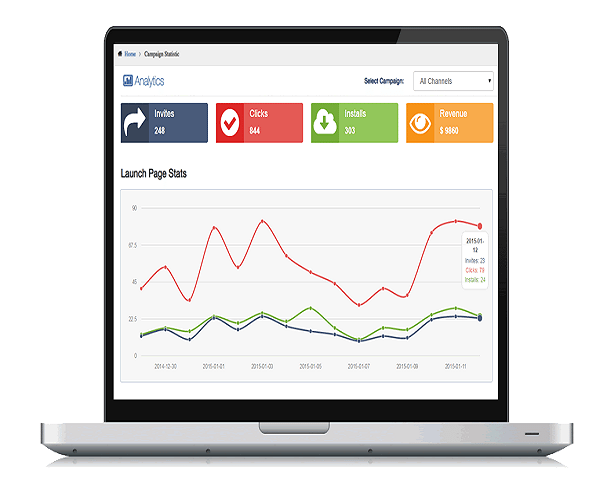 Loyalty Programme: In addition to in-app referral programme, clients can also run loyalty programme. For example, education app Byju’s say, “Fill your profile 100% and you will get 100 points or INR100.” “So, if you have some kind of pull inside, along with an inviting sense, you can use loyalty programmes,” said Laxman.

Product Sharing: Consider this instance – a user may be sharing 10 different dress images with a friend. But, no one is tracking whether her friend is viewing the images or is installing the app, or if is she is purchasing the same or different products, etc.

“So, there is a lot of gap between the discussions happening over social media buttons and what exactly happens when a user shares these products with their friends and family. We are trying to fill these gaps with our toolkit, and get the app developers data from both ends – the user and the product,” said Laxman

With AppVirality toolkit, an app developer can know who all are actually sharing the  products and which product is getting more number of shares, thus driving more number of installed purchases through social channels. “So, you will now have the complete structured cycle between your users and the products, thereby giving you analytics to understand them better and pursue accordingly,” said Laxman.

The analytics further help developers to analyse what is working best for them on social media channels. “If you know that by just sharing a product image, a particular user from NCR region is driving say 15 installs everyday, then instead of promoting your app on Facebook or Google Ads, you would rather want to advertise this particular product,” explained Laxman. 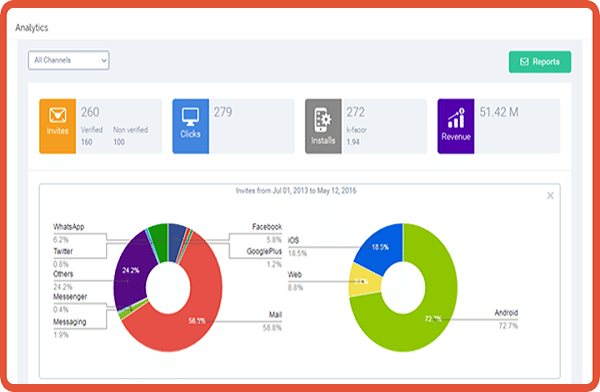 “These are the three broad techniques so far and we are trying to add more and more to this toolkit, so that you have a single SDK and a single dashboard where you can play with all these techniques without having to code,” said Laxman.

AppVirality competes with a few global players such as Yozio, Tapstream, and Branch Metrics. However, as per Laxman, AppVirality being a mobile first player, they overlap only in in-app referral stage.

For Appvirality founders, the initial challenge was to figure out how the solution should be structured. “There were already so many SDKs in the market that developers were trying to integrate with their platforms. So, we try to keep it very minimal – a 25-30 KB SDK. Fortunately, we got a very good set up early off, but to sell more SDKs was the key challenge and still is,” said Laxman.

Also, which solution should be built first was another challenge. As Laxman recalled, they were playing with around 8 different things and each one of those would have required 6 to 12 months to build a proper solution. So, which solution will be most apt for the existing market conditions was difficult to decide.

“It all depends upon how well you structure your SDK, as unlike web, the app store guidelines are really strict. Also, it is difficult to convince developers to integrate your solution,” said Laxman.

Laxman says that they are running cash flow positive for the last two months. Also, in the last 18 months, they have attained 50,000 monthly recurring revenue (MRR), which is quite a good number for a company in this space. They are further targeting to reach 100,000 MRR in the next 8 months.

“In my opinion, India is at the centre of an app boom and there hasn’t been a better time for people in the app marketing space. A report that I had read a while back stated that the app market in India has shown an increment of over 131% in 2015. This makes the Indian market a land of growth opportunities, for both app developers as well as products that support such growth,” said Laxman.

Startups like AppVirality have consistently proven that going viral is no magic. It’s just an assemblage of technology and wise decisions. Just by knowing what would tick the consumers, marketers can not only save thousands of dollars but can also built a better approach towards them.

According to Nielsen, India welcomes 5 Mn new mobile internet users every month! By 2016, it is expected that spending for in-app advertising would cross $7.1 Bn, according to Juniper Research. Mobile ad networks are expected to go beyond banners and it will experiment and integrate with different ad formats. As far as monetisation is concerned, mobile in-app purchases and advertising will be given primary focus.

The time is right, opportunity is immense; all one needs is a right mindset and a right product to reach the pinnacle of success. It seems Appvirality is moving in the right direction.