“We actually began some 12 years back, although it feels like we are starting up again now,” starts Ramesh Srinivasan, President of call centre software company, Ameyo. “The three founders – Bishal, Sachin, and Nayan were from the same batch at IIT and their main skill set was in writing code for programs. Around that time, not a lot of movement was happening from a data intelligence perspective as tech was hardware-focussed. And the era of the BPO was basically taking off in India.”

The way Ramesh explains it, a telephone exchange at that point of time was a physical place with a black box that house dozens of people who were hooked onto a switchboard and would make, and place calls. The same idea was utilised to build up the initial call centres – a bunch of people, a black box through which every call was placed/routed, telephones for every person attending calls and – the most important thing, the lack of a computer to automate and simplify the process.

“It’s this exact pain point that the software engineer-founder team decided to attack when they founded Ameyo – a software-based call centre for people,” he says.

“The solution was simple – the telephone exchange could work from a single software and a computer could be used to make voice calls, making the process trackable, convenient and, most importantly, cost-effective from a client perspective.”

Ameyo’s founding team consists of Bishal Lachhiramka, Sachin Bhatia, and Nayan Jain and it is a B2B platform that has consistently sought to improve the call centre experience for both customers and its clients by providing software, analytics, insights and more.

Ameyo’s first breakthrough product was called Ameyo 1.0 (the latest version is Ameyo 4.0) – to be used in premise by call centres and/or large enterprises, launched in 2009. “Our first order of priority was to make the agent’s job easier to do, so they could improve their efficiency, thereby validating the use of our software,” Ramesh says.

The company began by making it possible for the agent to integrate the customer’s details into the computer’s database so that the agent could access it with a minimum of iterations. This means that, say, if an agent had to handle about 10,000 customers on his end, he would only have to input their information once and recall it at will – time-saving and professional. 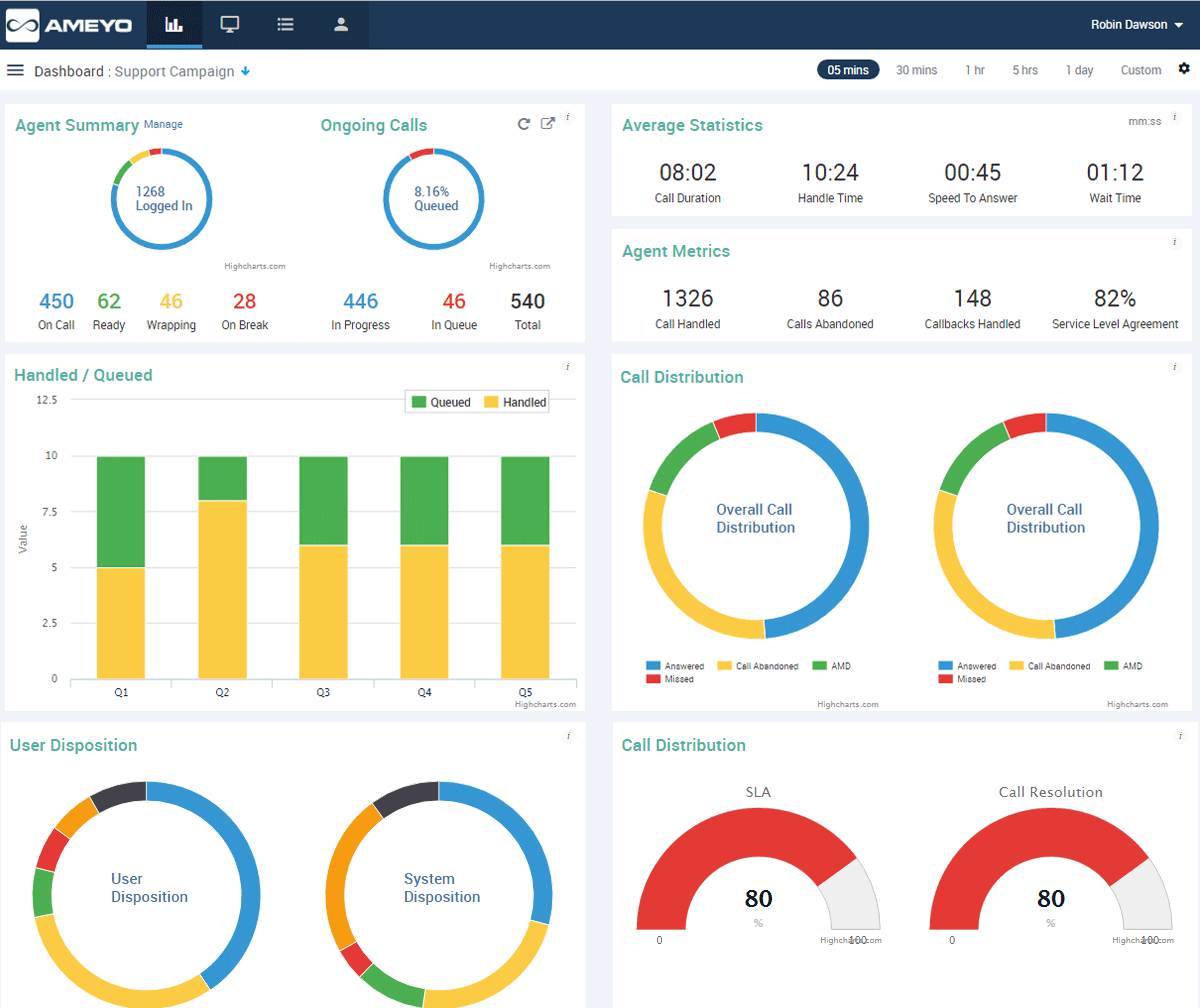 But, over the years, in Ramesh’s own words the product has evolved from this decidedly simple form of a dialler to a customer engagement software – soothing the customer’s temperament while solving their problem and making a sale, if possible during the same. This engagement solution to incorporating call centre technology and from there on, in the world of digital media the product has now evolved to become a customer-centric hub.

“Now, we are seeing a marked change of moving from voice calls to chat/email as it is more convenient for people to communicate digitally. And to accommodate these changes we have now turned from an inbound-outbound call management software service to a full stack omnichannel service in the last year.”

When asked to expand on the new solution Ramesh has this to say, “Say, somebody posts a complaint on the Tata Docomo Facebook Page. With our OmniQ solution, comprising social media, voice, chat, and email, the complaint becomes a ticket with the CRM, which can then be solved by the client in the manner they see fit, so ideally nothing slips through the cracks.”

In essence, the software which began as a simple voice-call software solution has moved up the value channel to incorporate social media presence via Facebook and Twitter – two places where customers are vociferous about making their issues known.

“It’s all about customer engagement in 2016,” says Ramesh. “Essentially, the CRM moves from phone/email chat and integrates available digital data and becomes a kind of predictive caller-agent by providing raw, contextualised data to the client that can be used to manage and engage a customer in a variety of ways.”

Onboarding CRM To The Cloud

“It was a natural progression to take Ameyo to the cloud, especially for Indian B2C companies,” says Ramesh. So far, the company has been dealing with B2B clients whose needs were different, the solution was different in comparison to B2C and in India, it is all about the ecommerce websites and other SMBs who are looking to understand customer metrics such as engagement, buy/sell ratios etc. from the get go.

According to Ramesh, the company’s cloud-compatible product Ameyo Emerge was placed on the Microsoft Azure platform about 14-15 months ago with a clear focus on clients who have customer-centric businesses.

“Initially, SMBs were wary of adopting a cloud-powered solution. But with the way the product was placed – it made it easier for the clients to engage with customers, handle cross-promotions while building engagement all leading to scale. We made it as flexible as possible so small businesses in particular could benefit from the move,” he adds.

As per Ramesh, 80-90 clients have already signed up on Ameyo Emerge, the cloud solution. And it is unsurprising then that Ameyo Emerge boasts of clients such as Amazon, Flipkart, Jabong, DHL, Acer, XGati, and Airtel among others.

Take the case of UrbanClap – the web and mobile-based local services marketplace had inefficiencies in optimising its database when agents would call customers directly through the cell phones. There was no way of collating the data on productivity or customer conversions till Urban Clap decided to use Ameyo Emerge.

“We automated the entire process by customising some of the features as specified by Urban Clap – such as streamlining the IVR, automating the entire calling process right from a customer receiving the call, to sending the call to the right agent through intelligent routing application,” says Ramesh.

According to an official statement, the new process has improved agent productivity by 50%, customer conversion by 6%-15%, instant and verifiable HR data, and availability of auditing calls via recordings.

“The cloud has taken storing and retrieval of information to the next level and is one of the primary reasons why we were so keen to move onto the cloud-based platform for Emerge,” shares Ramesh.

As all the products under the Ameyo umbrella are charged on a subscription basis for both usage and analytics, the business model for the company has been fairly sustainable.

“We have been profitable since inception,” claims Ramesh. “We never needed money to run our day-to-day operations. As we added more and more niche products or enterprise-ready products to the platform, we realised that to scale globally, we needed PMF.”

It was for this purpose that Ameyo brought on board private equity firm Forum Synergies who, according to Ramesh, invested $5 Mn in the company about one and a half years back. “First things first, Forum Equity brought more value than just capital when they came on board – expertise, advice on how to proceed globally. These were some of the areas where they were helpful, as Ameyo was largely an India and Middle East-centric company so far.”

Well, Forum’s association seemed to have jumpstarted Ameyo’s global footprint as it launched cloud platform Ameyo Engage for the US and Europe markets in June 2016  – and appears to be seeing ‘significant growth’ in the US, Europe, MENA, APAC and India regions over the years.

“If we talk about actual growth metrics, then we have to split it into sections. Before 2014, when it was almost 40%-50% Y-o-Y, and we had not thought of global expansion or deviating into the cloud,” says Ramesh. “After 2014, we have done broad structuring, expanded into new territories and launched new products. We are only interested in not hitting a plateau at the moment.”

Ramesh does say that the company is looking to double its business in the newer products in the next two years. It is also looking to build a strong presence in the US and Europe by partnering with Microsoft Azure and conducting branding exercises.

“We are also connecting with prominent linking platforms such as Zoho to make plug-n-play solutions easily available to our B2C clients,” he says.

Competition is rife in the cloud customer engagement space with companies such as SAP, Knowlarity, Core, Genesys, Interactive Intelligence vying for a share of the billion dollar pie. But Ramesh has a different take on the situation,

“It is not a winner take all market as the market size is very healthy – almost $5 Bn -$7 Bn. Our competitors only do bits and pieces trying to solve the customer-engagement pain point and scale it. The market is also very fragmented and as customer engagement is getting mature (with regard to how customers deal with brands/products) unless one offers a 360-degree perspective all existing business models are unviable,” he concludes modestly.

For a company that claims to have presence in 65 countries and all top tier cities in India – chasing down the rainbow at the end of the viable business model seems the logical next step.

Cloud, much like AI, machine learning and NLP, is here to stay – it’s the next evolutionary step for the digital world that the Indian economy is gearing towards, one leap at a time. Customer engagement on the cloud is a synchronised solution for smaller businesses who are looking for a way to connect/maintain and engage with their users in an easy-to-use platform. With the cloud-based customer contact market slated to reach $14.71 Bn by 2020, companies such as Ameyo, Knowlarity and established leaders such as SAP will find themselves fair game in the race to the finish.

But Ameyo, with an India-specific focus as well as one foot firmly planted in the global area, might just have the advantage it needs to get ahead – but without aggressive marketing and expansion, it is a question for the ages if it will be available to achieve the double growth it envisions for itself in the near future.