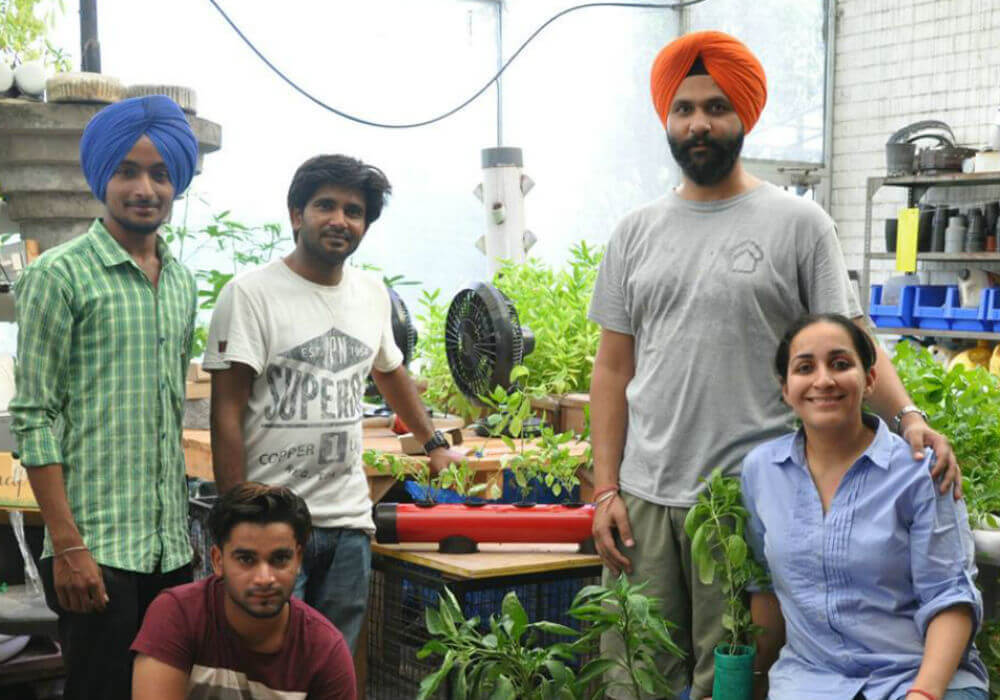 Food today is laden with chemical fertilisers that cause some major health risks such as cancer. Fertilisers such as ammonium nitrate, cadmium, potassium chloride, organophosphate (OP), pyrethroids, etc. are used to protect vegetables against pest and premature decay. Despite the apparent impact on health, the irony is that India is now the second largest manufacturer of pesticides in Asia after China and ranks twelfth globally.

“It was the importance of clean and healthy food dawned upon us. Bringing farming to the urban Indian homes, and making people aware of what they eat is the mission behind setting up Pindfresh,” says Somveer Anand, founder of agritech startup Pindfresh.

For Somveer and his wife Sohila Anand, the idea to launch Pindfresh was very much based on a personal experience that he had after one of his close relative fell ill due to the consumption of chemical-loaded food.

During their India visit the husband-wife duo had an hands-on experience on the extreme dearth of hygienic, nutritious food in India and this is where, they also felt, there was a dire need to provide people with the ability to grow vegetables locally. That’s precisely where the Pindfresh’s journey began 2016, when they were also joined in by Jaspal Singh Anand.

The agritech startup Pindfresh is turning small plots or spaces between buildings or in buildings into usable farm space. From rooftop gardens, to floors specifically designed to incorporate farming, to other spaces within high-rises filled with racks of perfectly lined leaf vegetables, it is striving to bring about a farming revolution in urban India.

Apart from selling in-house home systems (hydroponic and others) and fresh produce (lettuce, rocket, basil and mushrooms), it also runs programmes to train people (in schools and societies).

By using hydroponics, cocopeat gardening and other soilless techniques, Pindfresh is attempting to educate urban dwellers to use a technology which takes less space, demands lesser water and is completely free from pathogens and biological contaminants.

The concept of urban farming is a trend that is catching up fast globally. For instance, Tokyo-based Kono Designs started an urban farm by the name of Pasona in a nine-storey building in 2010, and this gave the employees a chance to grow and harvest their own food at work. Apart from Pasona, major companies in Japan like Mitsubishi are also leading the way to set up urban farms at their offices. Japan has become a front runner in urban farming, which is in turn helping the country cut food import costs.

India too needs to plant the idea of urban farming. Why? Here is the reason.

The urban population in India, which stands at 377 Mn, is expected to reach 600 Mn by 2031, according to a new UN-backed report. The increasing nutritional requirements of this fast-growing urban population will pose a huge challenge in the coming years.

As a result, Indian consumers are becoming victims of processed food as there is a wide gap in the supply and demand chain.

To address this problem, there is a subtle movement that is taking place in India over urban farming, spearheaded by millennials. Of these, integrating farming ideas into the urban space is also Pindfresh.

As far as India is concerned, a survey on the Status of Organic Farming in India was conducted by scientists from different universities including the Indian Institute of Soil Science to ascertain the real benefits and feasibility of organic farming in terms of the production potential, economics and soil health, in comparison to the conventional farms in India. The study revealed that organic farming, in spite of the reduction in crop productivity by 9.2%, resulted in an increase of 22% in the farmers’ net profit compared to conventional farming.

This trend got further escalated with the coming of urban farming and today, agritech startups are not only helping farmers to assess the soil and weather conditions or crop production but are also coming up with unique ideas to optimise the limited space in urban India to grow vegetation in offices and other commercial complexes.

And the best part is that the idea of organic farming is not limited to just offices; balconies, roofs, terraces, drawing rooms and kitchens in urban homes but could be seen as a future of vegetation in urban India and Pindfresh is determined to make it a reality with its advanced organic farming techniques.

Pindfresh And Their Concrete Vegetable Farms

Pindfresh’s journey began with an initial capital of $7.68K (INR 5 Lakh). When the agritech startup was taking shape, the trio did a lot of research to learn about hydroponics and then tailor make it to suit the Indian conditions (or rather, that of any developing nation). 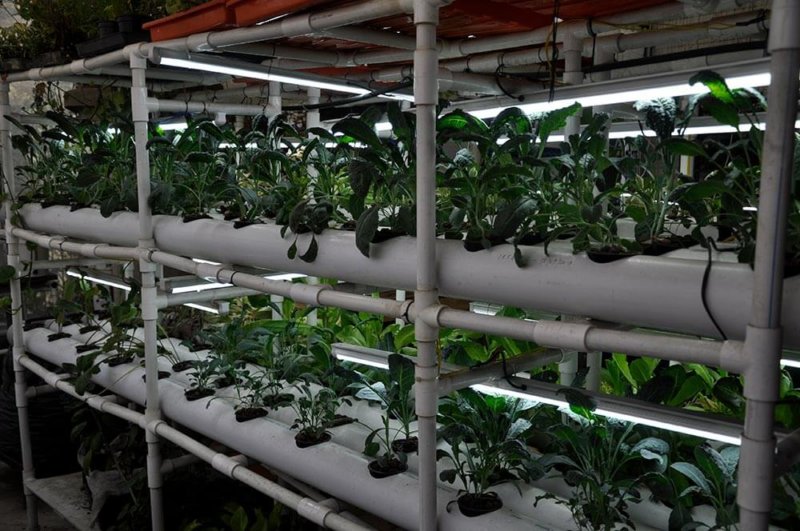 “For example, we try and promote hydroponics where the space requirements are important. For places we have no space constraint, we try and promote coco peat gardening in grow bags and feed them using hydroponic nutrients. Not being wedded to a particular technology allows us the freedom to experiment and recommend the most appropriate ways of growing our food,” says Somveer.

But this agritech technology or perhaps trend is soon catching up across India today.

Here is a look at how hydroponics and soilless farming is evolving in India.

According to a research pursued by the Indian Agricultural Research Institute, the area under hydroponics began to expand significantly in Europe and Asia during the 1950s and 1960s, and large hydroponic systems were developed in the deserts of California, Arizona, Abu Dhabi and Iran (1970).

The research elaborates that hydroponics did not reach India until 1946. By 2008, localised experiments were adopted to grow exotic crops like strawberry, green garlic and tomatoes.

Today, ‘Landmark Agrotech’ project is the second biggest hydroponics project in Gujarat and is currently under implementation. Likewise, for Pindfresh, all the growing is done at their prototype growing facility in Nayagaon, Punjab. 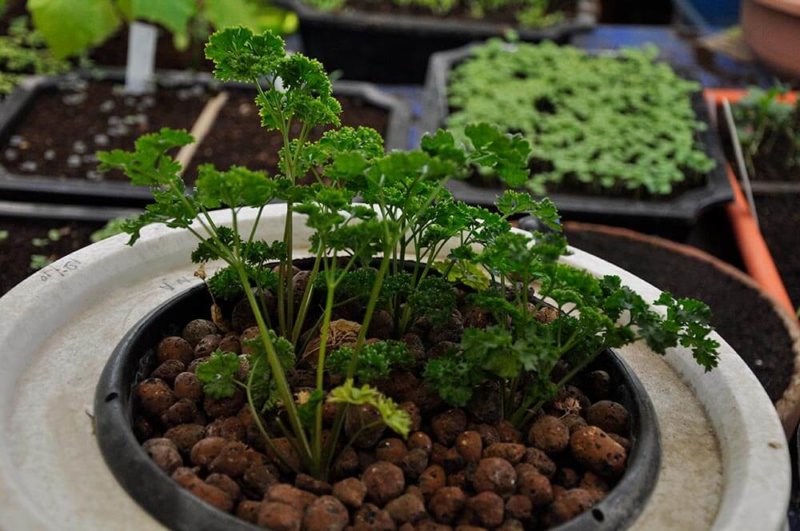 The startup is attempting to make cities holistic in their requirements of food and vegetation. To that end, it is working towards creating systems by which people will actually eat the local and fresh produce – just as if the food is coming directly from the Pind.

Essentially, they offer three services: creating and selling systems for home and commercial use; producing food using Pindfresh systems and selling it and holding workshops.

The startup is grossing over a monetisation strategy that involves making the vegetable saplings available for procurement by offices and houses. They have two types of customers: one who buys the plants to grow the vegetables themselves and those who only buy the vegetables. Pindfresh is also selling to wholesale markets.

“Traditionally, cities have sourced all their food and supplies from the surrounding villages. The reason why we call ourselves Pindfresh is because we want to move the production of food from the villages to the cities. We want to create mini pinds (villages) in the centre of the towns and in every household!” Somveer enumerates.

The startup is planning to develop an app which can advise customers on the right way and time to water the plants, add nutrients, check the pH of the water, etc.

The Road To Augur In An Organic Revolution Via Agritech

In the two years of growing leafy vegetables and building the organic ‘farm to fork’ concept for the urban landscape, agritech startup Pindfresh has seen quite a number of challenges.

“The major challenge we had initially was a complete lack of an agri startup ecosystem in Chandigarh (which was surprising, considering its the gateway to Punjab, the ‘Bread Basket of India’. The other problems that we faced included sourcing specialised materials and equipment (that we needed to make our hydroponic equipment with) and customer education but made us realise that a HUGE opportunity existed here,” highlights Somveer.

Despite the challenges, the agritech startup has been well on the path of exploring the opportunity as their traction shows.

As urban farming is fairly a new idea in India, Pindfresh is shaping itself to become a robust sustainable agritech startup to lead the industry amidst many people who deal with home-grown balcony systems and hydroponics. Organisations like City Farming, Earthoholics, Fresh & Local, Urban Leaves, etc. are its likely competitors.

According to Somveer, “This industry has a lot of scope of becoming a rage. The main reason behind it is that it is aimed at our well-being, and health, which are the burning topics of discourse these days.” 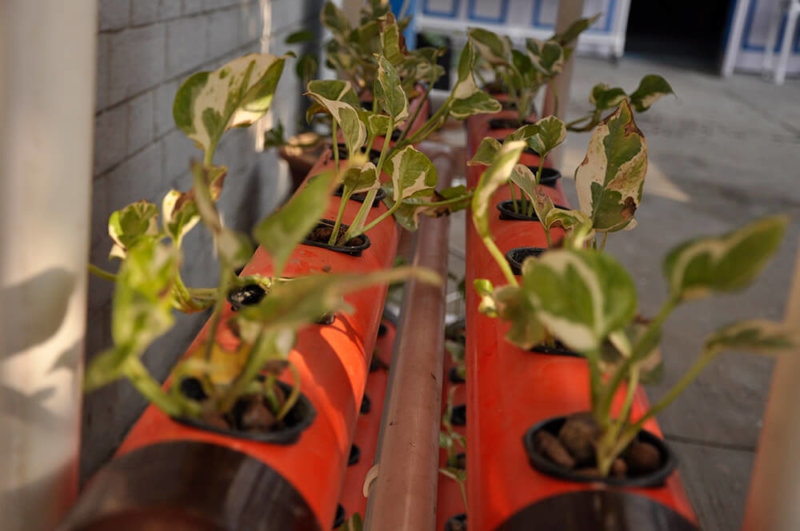 He adds, “It is well suited to the modern day lifestyle, where we are living in smaller spaces, with even lesser time to devote. Hydroponic and soilless systems are easier to maintain, requiring on an average of 30 mins a week – produce wonderful and nutritional food and flowers, are modular and DIY in nature and most importantly will not break the bank once you start!”

The agritech startup is aiming to introduce consistent innovations to grow and aid to the development of urban farms in India.

On the latest innovation the company is working on, Somveer mentions, “We’re always thinking about how we can use hydroponics to solve other real-world problems. So, we ‘invented’ the Niño. The Niño is a unique vertical system (the first of its kind in India) and apart from being easy on the pocket, is very low on maintenance as well! This system can hold up to 36 air cleaning plants, looks beautiful in being placed in a corner and it not only removes formaldehyde, acetone, NOx’s and COx’s, etc. from the room, it also releases fresh oxygen for us to breathe and work in a healthy environment.”

As for the way ahead, Somveer avers that they are currently toying with the idea of raising a little bit of money for the R&D and for inventory, but prefers an investor who understands the space. The startup says it will need about $307,600 (INR 2 Cr) to roll out its rooftop system for growing plants (and that doubles as a nursery for their farmers).

The founders plan to use the funds for the development of sensors and IoT systems that can predict how much food will be required at what time, what the growing conditions are going to be in the future and how much of the produce must be consumed to maintain a healthy lifestyle.

The Green Of The Future

In countries like Israel and the US, hydroponic produce is already part of the market, which is yet to happen in India. The Hanging Gardens of Babylon is perhaps one of the earliest examples of hydroponics.

Urban farming, especially in the case of India, can play a significant role in urban environmental management as it can combat urban heat island effects and enhance the quality of air, besides offering organic, fertiliser-free produce. The Food and Agricultural Organization has long since recognised urban agriculture as a key element in food security strategies.

However, a formal recognition of urban agriculture and its integration into the urban planning process are necessary for it to be successful. In India, urban agriculture is being carried out in many cities including Mumbai, Delhi, Kolkata, Bengaluru and Chennai under the leadership of the government, private agencies or even individuals. Considering the wave of organic revolution that it can ignite, startups like Pindfresh may go a long way in equipping India to meet its future food demands.