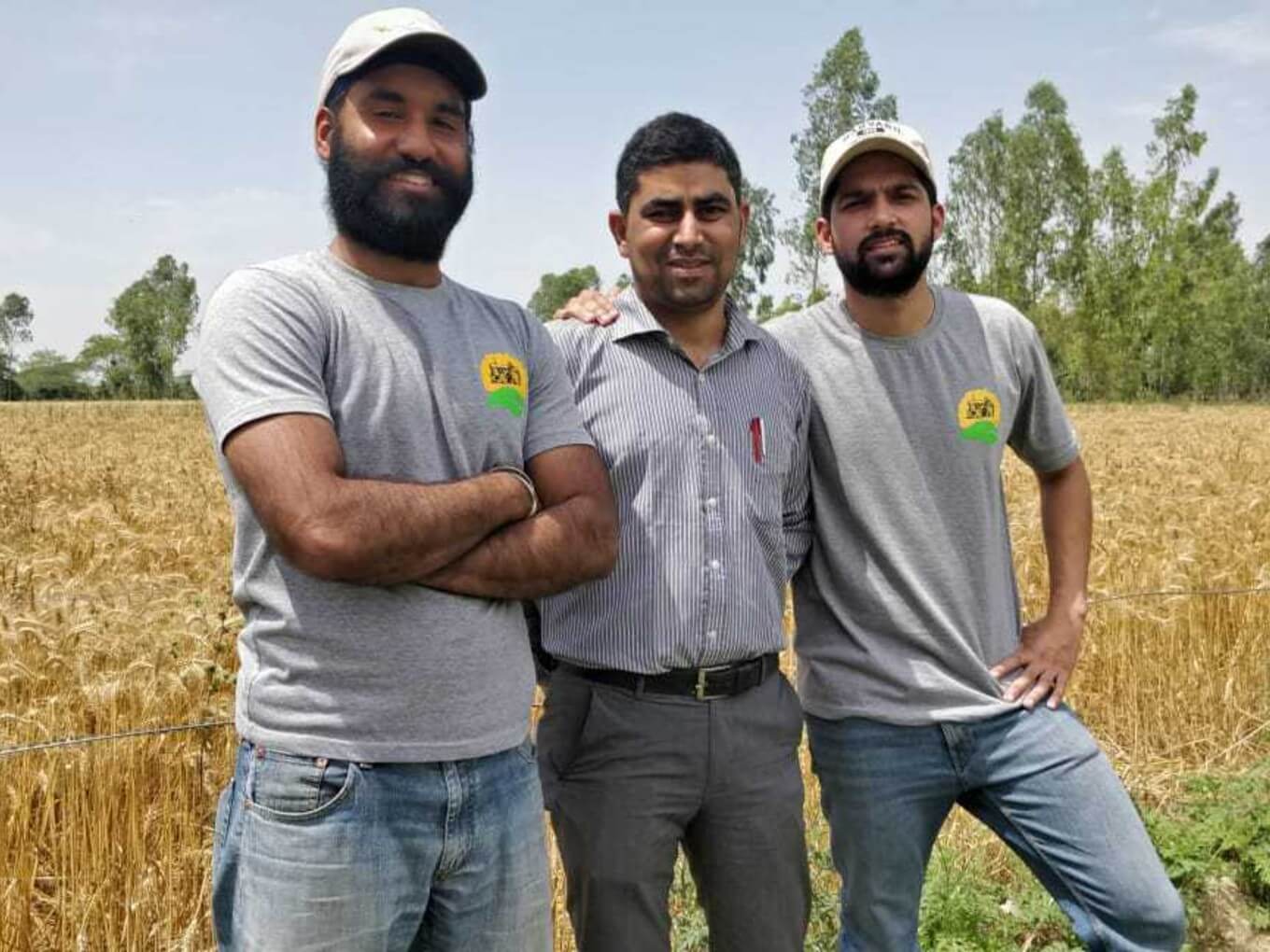 Backed by IAN and LetsVenture, farMart is currently working with farmers in UP

India accounts for 7.68% of total global agricultural output and roughly 49% of its workforce is in this sector, yet it contributes only 17-18% to India’s GDP. While the government and agritech startups such as Ninjacart, AgroStar, Stellapps, CropIn, EM3 Agri among others have tried improving the efficiency of agricultural production and distribution to support the average Indian farmer, one fundamental problem still remains unsolved — instant finance.

“There is a massive gap when it comes to availing credit for farm and farm-related activities. We realised this when we started with our Uber for tractor model in 2016, renting out tractors to the farmers,” said Alekh Sanghera, cofounder and CEO of farMart, an agri-fintech startup based in Gurugram. Though the tractor rental business model was successful, it was not much of a value-addition to the farmer’s existing situation, where every decision revolves around access to funds.

As he elaborated further, more than INR 11 Lakh Cr is allocated towards agriculture credit under the priority sector lending (PSL) by the government. However, this capital does not reach the smallholder farmers, as only less than 20% of smallholder farmers are able to receive credit from formal banking institutions.

“This means over 100 Mn farmers are dependent on informal channels who charge exorbitant interest rates to meet their credit needs each cropping season,” Sanghera added.

In order to solve this, Sanghera along with his two cofounders Lokesh Singh and Mehtab Hans—  all from farming families and significant experience in microfinance segment —  pivoted farMart to the agri-fintech model in July 2018.

The farMart platform basically supports smallholder farmers in getting access to low-cost digital loans to allow them to purchase products at the point of sale. Farmers receive a virtual credit card, through which they can buy high-quality seeds, fertilizer and other agricultural inputs on credit through farMart’s network of 90 offline retail channel partners.

No cash disbursement is given to farmers, ensuring zero diversion of funds by middlemen, and enabling a cashless ecosystem.

During their pilot phase, the agri-fintech startup reached 300 farmers and disbursed loans worth INR 15.5 Lakh with less than 1% NPA (non-performing asset). Backed by IAN and LetsVenture, farMart is operational in select areas in Uttar Pradesh. The founders are looking to expand operations to Madhya Pradesh, Rajasthan and Bihar over the next two years. Also, they are targeting to reach 1 lakh farmers thereby disbursing loans worth INR 100 Cr till July 2020.

How Does farMart Solve This Complex Problem?

Any lending institution has three pillars: Right and profitable customer sourcing, credit assessment and finally collection. farMart is working on all three of these to solve the farmer-credit problem.

The founders focus on smaller farmers with less than 2 hectare of landholding as their primary target audience. Sanghera told Inc42 this is the most under-served community, and don’t have too many options. The It typically takes them 3-12 months to get a loan from banks, and often they have to pay bribes or fees to touts, apart from banking charges.

Instead, farMart offers access to credit in a range of INR 10K to INR 50K, within three working days, and has become a viable alternative for farmers by gaining their trust over time.

“Without disclosing the exact numbers, let me tell you, our sourcing cost is double-digit INR which is single digit % of our margin,” Sanghera added.

farMart operates on a proprietary credit underwriting model which analyses over 50 alternate data points to determine the creditworthiness of a farmer. These data points are collected across four areas:

Data about farmers and their land status is collected with the help of the retailers who are working with farMart. It partners with agricultural produce organisations, farmer cooperatives or govt-recognised retailers. “After one crop season, local retailers in the area also start partnering with us,” Sanghera added.

Further, the agri-fintech startup has its team working on the ground, to help farmers complete their profile on the platform. A farmer can add the required information, by scanning documents such as a bank passbook, Aadhaar card and other ID proof. “We have OCR technology wherein the passbook image data will be directly converted to text,” he added.

Like in the microfinance industry, farMart offers loans by using a ‘Closed-User-Group’ lending model, wherein loans are given to a group of individuals within an area. In the case of non-payment of dues by any one farmer, the community can help the company recover loans.

At the same time, the agri-fintech startup operates in regions of Uttar Pradesh (UP) where farmers grow crops like wheat, paddy, pepper, mint, and potato. All these crops are backed by the government and are likely to be purchased in case of contingency.

At the collection point, farmers are offered flexible repayment option that allows them to pay back their loans in any amount throughout the loan term, which is typically one crop season equivalent to three months, as farmers have seasonal cash flows.

Farmers also have the option to pay in the form of produce to farMart’s market linkage partners. According to Sanghera, for a farmer, the produce is also currency.

“We realised that if we can help farmers convert produce into cash to repay us, it would drastically reduce our collection efforts and the cost of collection. Therefore, through market-linkage programs, we enable farmers to not only get better rates for produce but also collect repayments through a concentrated set of entities digitally,” he added.

Agriculture is considered one of the riskiest sectors for lending due to two core issues: the risk of diversion and risk of migration, which can lead to a high incidence of non-performing assets or NPAs.

Sanghera emphasised that farMart is not only solving the credit problem for farmers but also solving NPA problem for banks and financial institutions. Amongst many challenges, the banking ecosystem relies on self-reporting of the consumer to track or report usage of loans. In most cases, loans have been diverted from the farm for unrelated activities such as conducting a wedding in the household, building houses etc. The ecosystem grapples with the acute challenge of loan usage monitoring.

Now, under priority lending act, 18% of the capital, needs to go to the agricultural activities. So, banks usually buy agri-portfolios from microfinance companies on premium or deposit money in the NABARD account with a penalty. In any case, the available resources do not reach the farmers in need.

“With farMart’s no cash model, we can not only stop risks on unwanted diversification of agri funds but can also track the fund usage to the level of expenditure in seeds, fertilisers, agri-medicine and more. This data we believe can change the perspective of the sector itself,” Sanghera added.

One of the other challenges for the banking ecosystem is doing KYC (Know Your Customer) for the farmer community only on the basis of Aadhaar, PAN card, Ration Card etc. Here, the farMart’s 50-point data analysis method can help banks, microfinance and other lending institutions get all rocher profile data on one platform and assess the risk of the portfolio in one go.

As farMart is not a non-banking financial company or NBFC, it is currently partnering with lending institutions including Happy Loans, Arth Impact among others. These institutions are offering credit to farMart to in turn lend to farmers on their behalf.

At present, the agri-fintech startup claims a 90 Day DPD metric (Days Past Due, which banking institutions track carefully to monitor repayment patterns) and less than 1% defaults in the loan book.

“The infrastructure layer that we are trying to build between a lending institution and farMart is that we will assess the customer for you, we will check the utilisation of capital and we will also do the collection. You just come to plug and play into the model and you can lend to the farmer with low risk and high returns in the process,” Sanghera said.

From a policy standpoint, the government has taken concrete steps to enable players like farMart to create opportunities which didn’t exist before – Aadhaar-enabled KYC, Jan Dhan bank accounts, and NPCI payment infrastructure. On top of that, the deeper penetration of mobile and internet is helping fintech startups digitise the entire ecosystem including agriculture.

Sanghera believes that farMart is on road to lead in the era of Microfinancing 2.0, leveraging technology to disrupt the traditional cost structure of microfinancing institutions. He added that the biggest competition comes from the informal market which is deep-rooted in agriculture and is currently financing and controlling almost the entire value chain. In order to scale, farMart needs to be 100 times better and easier to use than the offline market.

As Sanghera rightly concluded with 120 Mn+ smallholder farmers in the country, the opportunity for agri-fintech is massive and to the tune of $60 Bn as per his estimates. But he is also confident of building on the steps farMart has taken so far. “There will be an entire ecosystem of business on top of this infrastructure much like what we have seen in ecommerce today.”