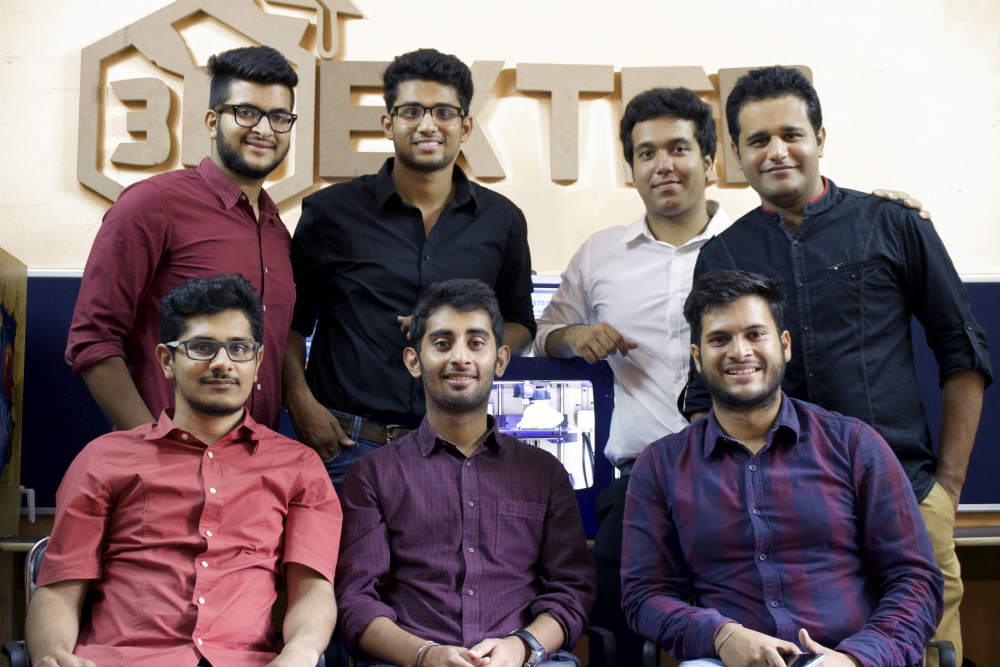 3D printing technology has been around for more than 30 years. But it has only picked up steam in the Indian market in the last two-three years. It started off as an alternative to traditional prototyping and today 3D printing has applications across various industries such as architecture, manufacturing, space, automobiles, to name a few. Right from building prototypes for prosthetic human organs to buildings, selfies to modeling automobiles, all it needs is some spool material and a little training.

While the field does not lack innovation and creativity, its use cases are restricted, despite the apparent ease of use. With 3D technology, companies end up taking manufacturing projects and designing products with no real progress in enterprise or, education.

Contrary to this, Raunak and his six school friends saw a lot more potential in the technology than just prototyping and decided to integrate 3D printing with education, with the help of their startup 3Dexter. The startup not only provides 3D printers to schools, but they also introduced 3D technology in the school curriculums and transformed their computer labs into innovative labs which now consist of 3D printers, pens, scanners and designing software.

“3D printing holds immense importance for the youth, as it promotes creativity, innovative thinking, and logical reasoning. It is in fact, the most favourable choice for smart curriculum in educational spheres,” begins Raunak Singhi who is providing experiential learning at grass root level through 3D printing technology. From Working With Students To Building Tech For Them

It all started in 2015, when Raunak Singhi along with Nikunj Singhal, Shantanu Kwatra, Smarth Vasdev, Raghav Sareen, Partha Batra, and Naman Singhal decided to start their journey. They had no clue how to execute their idea, what they knew was that it should have something to do with technology.

Being students and working professionals, they would discuss their business plan from 10 in the night to 3 in the morning. They went through a lot of ideas from online delivery to car servicing…and rejected them all. But after six months of extensive research, Raunak and his team came to the conclusion that 3D printing itself is not making an impact in the society but if they integrate 3D printing into education it will make a difference.

“Before finalising education as a sector to tap, we researched a lot of industrial sectors from automobiles to fashion. We all were working for a NGO called Make a Difference, where we were teaching kids. We were very much in touch with the students and the problem they faced,: says Raunak.

“We had two problems in front of us – kids are basically cramming and there is no experiential learning involved with it. We were following the decades-old traditional method of studying and there was no constant development in the education sector. So we took this technology, integrated it with these two educational problems and that’s how 3Dexter was born,” he adds.

Over a period of six months, Raunak and his friends developed a curriculum which contains qualities such as creativity, subject integration, and problem-solving. They designed a progressive curriculum for classes 3-9 in sync with CBSE, ICSE, and IB boards to help the students understand existing subjects with a physical experience.

“We believe that the right way to justify this technology and bring a revolution in the classrooms is through integrating it with the school subjects while igniting innovation in the 3Dexter labs,” says Raunak.

In September 2015, 3Dexter conducted its first 3D Printing and Designing Workshop – a hands-on workshop with activities like designing, modelling, 3d pens and various others. 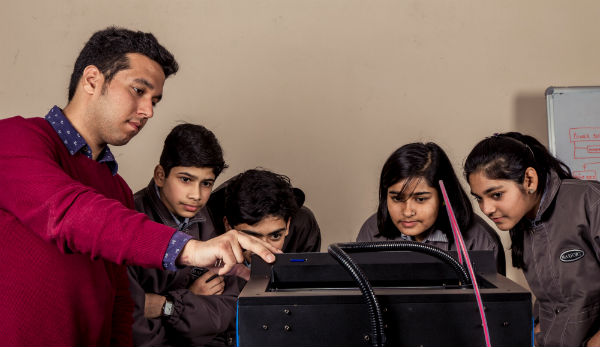 This workshop boosted the confidence among the founders and in October 2015, 3Dexter pilots its curriculum for the first time with 350 students in class 6-9, and from thereon, there was no looking back.

To provide affordable 3D printing education, the team design the printers by themselves. These printers are then sold as units to schools which integrate the 3Dexter curriculum.

“Our team design the printers and send it to our vendor in Ahmedabad in Gujarat where they assemble it. It cost us around INR 70K to 80K per printer,” informs Raunak.

They employ two teachers in every school who are experts in 3D printing to make sure the right message is delivered. With the help of these teachers, they are able to focus on their progressive 3D printing curriculum which is integrated with the school subjects.

For the entire curriculum which includes two trainers, 3D pens, printers, software, and scanner they charge around INR 7 Lakhs-INR 10 Lakhs, per school. Currently, they are focussing more on providing knowledge and awareness about their product, profitabality is not on their list of priorities.

With a mission to strengthen the education system in India, 3Dexter has initiated a campaign to conduct workshops in the country so that its technology reaches every school. Till now, the 3Dexter team has conducted successful workshops at Presidium School – Ashok Vihar, Colonel’s Central Academy and Shiv Nadar School in Gurugram, Mount Abu in Rohini, to name a few.

After closing deals with a few schools in Delhi, 3Dexter has also moved to other states such as Gujarat, Maharashtra, Karnataka to expand its market.

“Currently we are running our annual curriculum in 10 schools and have given more than 50 workshops to different schools catering to up to 10,000 students,” says Raunak.

Blending technology in education is easy but convincing people especially Indian parents to accept it was one of the trickiest tasks for the 3Dexter’s founders. For Raunak and his friends, making schools understand the technology and its application proved to be a challenge for them.

Interestingly,  areas like Bihar and Gujarat have turned out to be very receptive about this technology. Bihar is generally considered backward, when it comes to adopting new technology but these founders see a lot of potential in Bihar and surrounding states.

“Overall, the market has opened up and started accepting new technology with time. We believe that this technology will soon be present in many schools across India and have set a target of closing at least 50 schools under 3Dexter, by end of academic year 2016-17,” he shares.

With a team of 22 people, the founders believes the key reasons for their growth have been their team and its belief in the product. Despite facing a lot of challenges in showcasing the technology and making people aware, the team has grown well and accomplished its goals.

In today’s world, where technology has become a life blood, the startup is competing with global firms like New York City-based desktop 3D printer manufacturer company, MakerBot and Massachusetts-based Form Labs. These firms are global leaders when it comes to provide education with the help of 3D printing.

“To be honest we don’t have any direct competitors selling the same product. There are companies selling 3D printers but no one is into providing a unique curriculum integrated with their school subjects. Though, MakerBot and Form Labs are also serving the education sector through similar mediums,” says Raunak.

3D Technology And The Changing Face Of Education

3Dexter aims to reach out to more schools through workshops, conferences and various educational exhibitions. The company is also looking to conduct more than 50 workshops covering around 10,000 potential students by March 2017. Currently present in 14 schools across Delhi, Bihar, and Gujarat, it further aims to expand its horizon in Mumbai, Chennai and Hyderabad.

“Innovation should start at the very grass-root level, and the best way to attain it is by bringing imagination into reality. Also, with recent steps by the government, such as the launch of ATAL Tinkering Labs and allocation of innovation funds for the secondary classes as presented in the Union budget, we believe that, in the coming future, technology will play a major role in a child’s education,” concludes Raunak.

At its core, 3Dexter is a venture that aims at revolutionising the Indian education system through modern teaching methods aided by 3D printing. It is tapping into the emerging nerves of technology by introducing this technology to children.

According to 6Wresearch, India’s 3D printer market is one of the emerging markets, as it is projected to record $79 Mn by 2021, primarily from Tier I cities. What 3Dexter is aiming for is carving a niche in the education market with a judicious use of tech awareness and tech adoption.

But before 3Dexter came into the picture, there were many other startups who entered this sector and failed miserably. According to e27, Pirate3D, a Singapore-based startup wanted to disrupt the ecosystem by introducing 3D printers. It had even raised $1.4 Mn through crowdfunding in a mere 10 minutes. The founders’ hopes were high but they were soon hit by reality. They had to shut down their startup as they were unable to fulfil the demands of their backers, despite raising a further $2 Mn from another set of investors in Singapore and Germany.

When a well-funded startup such as Pirate3D had to shut down operations due to the technology not being scalable, it is safe to surmise that the idea cannot be sold on the novelty factor, alone. While 3Dexter wants to practically apply this technology to a broad field such as education, questions of maintenance of products as well as continued awareness and adoption might affect its scale. It will be interesting to see how far 3Dexter can make it in its revolutionary pursuit of providing experiential learning to students with tech.

[3Dexter is part of Inc42’s 42 Fellowship – a year-long fellowship programme for India’s top growing and upcoming startups with the aim to build a close-knit community who can help each other multiply their impact.]