Smartphones Are Destined To Shape India’s Networked Future: An Analysis

Smartphones Are Destined To Shape India’s Networked Future: An Analysis Recently India was in news for all the good reasons when IMF declared that our country was the only fastest growing “Major Economy” in the world.

This comes as a huge booster for the Business community in India, which is slowly, but steadily progressing towards the use of technology and Internet for doing business rather than depending on the conventional techniques.

As per a recent study, India has successfully tapped into the Mobile Revolution after missing out on the Telecom and Desktop revolutions of the past.

The mobile revolution is fuelled by multiple factors, which are also major contributors for the sustenance of the new trend. To list a few:

1) The phone tariffs are one of the lowest in the World
2) The Mobile telephone network is humongous and coverage is near perfect
3) There are multiple vendors and there is hyper competition among them.

With all these features already existing and a potential user base of 97 crore users, one can only imagine how viral the Smartphone network will be and what all can be achieved when everyone of those 97+ crore people will use a Smartphone and have data connection to share instant tweets, update status, buy online and stay connected.

Imagine a country of 1 billion people chatting with each other, knowing about each other and transacting like never before.

If we look at the current Smartphone data usage, we will find the numbers as highly positive. Currently there are only 18.8 crore people who use mobile data and people with that number alone we have Online retailers with billion dollar valuations.

As per Morgan Stanley, the number would spike up to 33 crore by 2016 and will sky rocket to 52 crore by 2018. I would say that the study is very conservative and being an Indian I know that the number might be achieved even before 2017 as we Indians hate to wait, be it in a queue or in adopting new things. Currently the major mobile data consumption happens in only 8 mega cities of India and we have close to 200 cities with a population of 2 Lakhs or more. 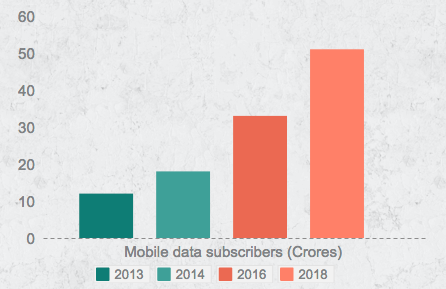 The government is also focused on tapping this huge opportunity and is intensely focusing on Mobile Governance and connecting with the people through technology.

The central government has set up projects to build Smart Cites where Mobile communication and technology will play a major role in making these cities smart enough. These numbers and trends are only the start and as time passes by, we would see major overhauls in the way we lead our lives in India and tapping on our smartphones would give us access to everything and anything.

In conclusion we would like to quote Peter Thiel, who says, progress cannot happen if we blindly copy from someone. Globalization is not the solution for the world’s problems and it can only take us from 1 to n, but to go from 0 to 1, all we need is technology. And now the focus of the next gen India is on Technology and its usage in progressing forward. The future is close when an Internet connection and a mobile phone is all we will need to move the country ahead and make India a golden bird like it was before.

[This article is contributed by Surajit and Ashis , Entrepreneurs, Technologists and are avidly curious about the Human psychology. While they are not breaking the code or designing business cases in their Toronto office, they devote their time towards– “Nexhop” their entrepreneurial brainchild, which is scheduled to launch in India in mid 2015.]