Current size of India’s IT Industry is $167 Bn

To make $1 Tn in enterprise value, we need is 66 companies with $1 Bn each in revenue

If AI/ML is the tall blonde, who are the friends India should be focusing on? 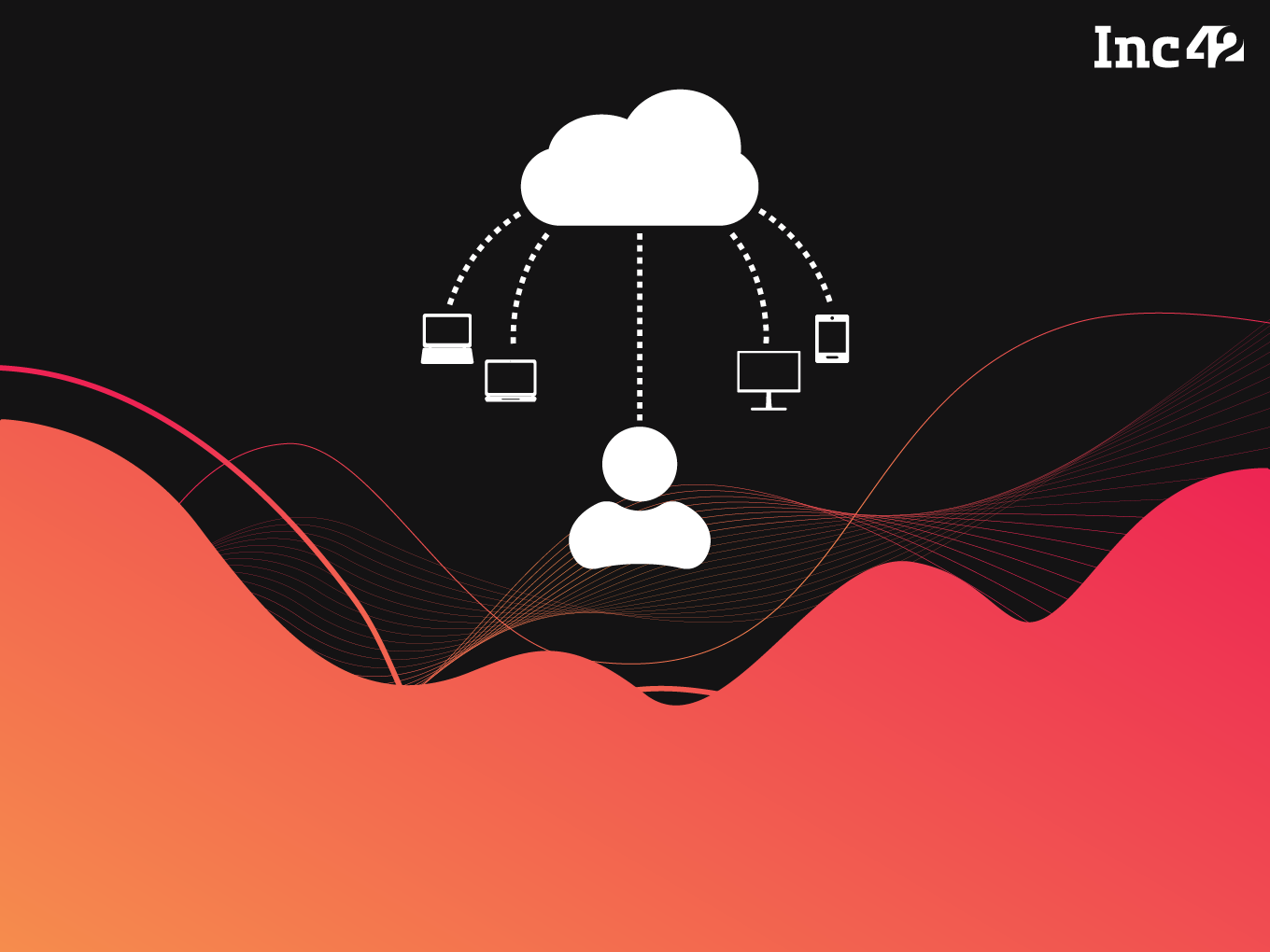 The current size of India’s IT Industry is $167 billion and it is growing at 8% year-on-year. (Source: NASSCOM). At this rate of growth, it will take us another 25 years and up until 2042 to get to $1 trillion. That’s because not all revenues are created equal.

Let’s fast forward and look at a different kind of company, Freshworks. While the company’s revenue is about $100 Mn, it’s enterprise value is $1.5 Bn. That is a revenue-to-value multiplier of 15, or ten times more than a typical IT services revenue multiple.

This is an order of magnitude of difference. If you use this 15X multiple and do the math, to make $1 trillion in enterprise value, we need is 66 companies with $1 billion each in revenue. While a trillion dollars might have looked impossible initially, it doesn’t seem as such when you only need to create 66 $1 billion dollar companies. This equation shift can happen because of the high quality of SaaS product revenue.

The Road to a Trillion

Still, building 66 $1 Bn revenue SaaS companies isn’t easy. You can’t just build them directly. To do that would be like trying to directly jump to the 15th question in a game of “Who Wants to Be a Millionaire”. To get to this target, we need to build a pyramid of large SaaS companies.

During a conversation with Shekhar Kirani (Partner, Accel India) and 5-6 other SaaS founders at SaaSx4, Shekhar said, “I am not sure that if Girish (Founder of Freshworks) had to start his journey all over again, he would be able to repeat the same kind of success.”

This wasn’t meant to take anything away from Girish, as we all have incredible regard for him and what he has achieved. What Shekhar was really trying to say is that there is no formula to make a billion dollar company, and I totally agree with him. All we can do is increase the odds of success by creating a larger pool of probability to make this happen. To do that, we need to start at the bottom of this pyramid. 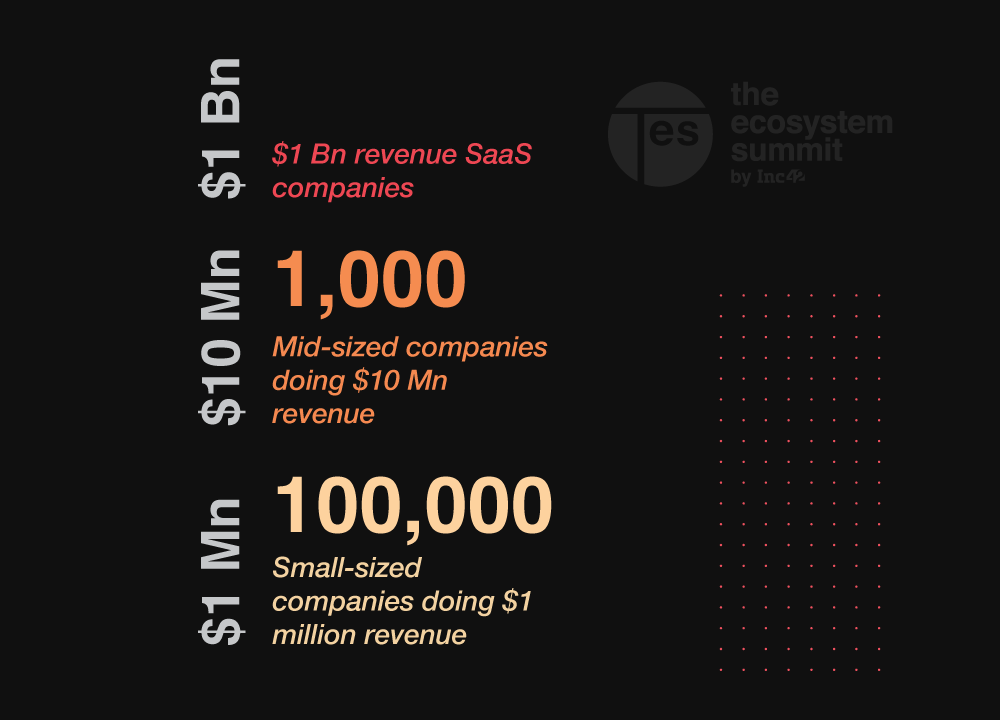 We should build a large base of small companies that start out doing a million dollars in revenue. By probability, some of them would scale up to about $10 million, and eventually, a small percentage of these would go on to become billion dollar companies.

Where Do We Start?

To achieve this kind of goal, you need to create a completely new ecosystem. According to the Startup Genome Project Report – 2018, “An ecosystem should focus on a startup sector most closely related to its strongest traditional strengths relative to the global competition.”

The key questions we must ask are, “What is the traditional strength of our country?” and “How does it relate to the global competition?”

There are four major global technology ecosystems in the world: the United States (primarily Silicon Valley), China, Israel and India. Let’s look at how each one positions itself. The US showcases itself as the place for cutting-edge technologies and goes after everything new.

China seems to be constantly looking at how they can replicate Silicon Valley inventions faster and cheaper. (In fact China is getting so good at this, that the number of unicorns and patents in AI/ML that China has produced is exceeding if not equally that of Silicon Valley.) And Israel has positioned itself as a leader in deeptech, encryption, security, and military technology.

However, when it comes to India, there is no clear positioning or messaging. There is a lot of confusion around what our strengths are. We talk about Artificial Intelligence and Machine Learning, but those are the same things that China and the US are going after!

This reminds me of a scene in the movie “A Beautiful Mind”, where a beautiful, tall, blonde girl and her friends walk into the bar where John Nash and his friends are. Every guy in the group wants the blonde. But Nash comes up with this theory that the only way for all of his friends to get a date is to ignore the blonde and go after her friends instead, doing what is best both for the individual and the group.

AI and ML are deeply rooted in data, and companies like Google and Facebook are the current lords of data. So going after the AI and ML tag without having this data can be suicidal unless you are in an extremely niche field. So if AI/ML are the tall blonde, who are the friends India should be focusing on?

In my view, the next best thing for India is SaaS and we should heavily bet on it. It also plays to the strength of India. Over last 30-40 years, due to the IT services boom, our country has built deep domain expertise in basically every industry vertical. It is that expertise that needs to be productized to make India a global SaaS hub.

Although India hasn’t positioned itself well in the global SaaS space, it can take inspiration from what Chennai has done. Chennai has already established itself as the SaaS capital of the country. How did Chennai do this?

Chennai does more than a billion dollars in SaaS revenue. This is high quality revenue unlike ecommerce companies whose top line numbers are essentially gross merchandise value. SaaS revenues are in the range of 80-90% gross margin. The CoGS for SaaS is close to zero or negligible.

The Chennai ecosystem has about 10,000 people working in SaaS. The talent pool is not just purely coders, but a well-rounded pool of product management, UX designers, inbound marketers, inside sales, and of course programming talent.

How can India replicate Chennai’s success in SaaS in other cities like Pune, Indore, Cochin, Hyderabad, Vizag, and position itself in the global marketplace?

The first myth is that we think success in SaaS is always about funding. But for SaaS to take off, investor funding is inconsequential. In the below quadrant, there are more than four companies going after the global SMB market. There are unicorns such as Freshworks who have $260 million in funding, while Zoho is four times bigger in revenue and got there with ZERO external funding.

KiSSFLOW, with just $1 million in funding has been able to build a comparable business with Chargebee which received $25 million. So it’s been proven that both models actually work, whether you are building a unicorn like Freshworks or a multi-million dollar success story like KiSSFLOW and funding isn’t a deal breaker or game changer in the SaaS marketplace.

The next myth is location. People generally think you need to be in the most happening place to make it. So we have large numbers of professionals and entrepreneurs leaving smaller towns like Indore and Vizag to go to Bangalore or Mumbai to make it big.

It may seem counterintuitive, but SaaS actually requires a quiet place away from a lot of noise and distraction of a city like Bangalore where your team members are churning every 12-15 months. The first 18-36 months of a SaaS company are critical and you need a quiet place and an undistracted team. There is enough proof that SaaS companies can be built from ‘dokku’ places (a Tamil word meaning ‘middle of nowhere’) like Tenkasi, Renigunda, and Jallandhar.

The next common myth is we won’t get talent out in the middle of nowhere. A SaaS business in the early stages requires only a team of 10-15 to make it big. So a founder needs to simply worry about putting a solid founding team together, and not so much about the next 100 hires all at once. Most of the initial success for KiSSFLOW was done with a small team of 15 people. So the location and the team size are inconsequential too.

In the image above, I want to focus on what it takes to be successful in the Global SMB market. While these principles can apply in many situations, the steps to success can be seen in this flywheel image.

It all starts from building a really fantastic product that is offered at an affordable price point. To sustain low prices, you need high volumes. High volumes can only be achieved if the software is sold to pretty much everyone in your target segment irrespective of whether they are small, medium or big. The only way to sell to everyone is to go online.

To sell online, you need transparent pricing and the ability to experience the product, which also means you need good support collecting feedback. This makes the product better and you are back to the beginning.

This is the recurring loop that moves a SaaS company forward and makes it unstoppable.

Small Steps To A Trillion

A trillion dollars in value for a single sector of an economy may seem very lofty, but that doesn’t mean that it is impossible. By creating a thriving ecosystem across the country and leveraging the skills we have learned over the last few decades, we can build thousands of very profitable companies.

Using the multiplying power of SaaS and excellent products, we can even grow to the point where $1 trillion is a legitimate possibility. Let’s take this vision as a reality and move forward!