How ShotPitch Trended On ProductHunt For A Day

How ShotPitch Trended On ProductHunt For A Day 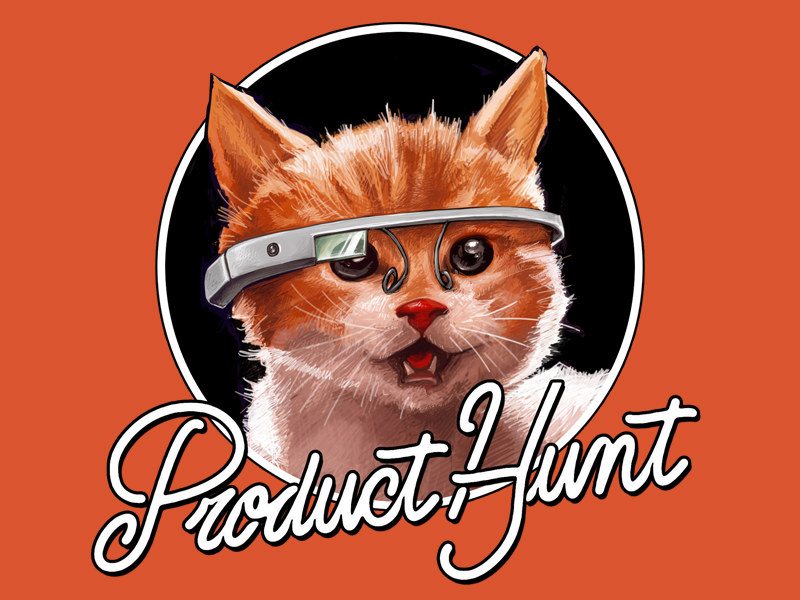 If you are an entrepreneur building a product for masses then the chances of you having the dream of trending on PH is very high. We just lived the dream on 30th March 2016, when we got hunted via one of the most known hustlers in Silicon Valley aka “Jack Smith”.

Here are the five things we learnt after becoming the second most upvoted startup from India(still to be 100% sure on this) and how you can use them to have a great experience on probably the best platform for discovery i.e Product Hunt.

1) Timing: Timing your hunt on PH is extremely important. Although you can get hunted by someone around the world, whom you probably have never ever met/known because he/she happens to be a big fan of your product, the chances of that happening is less until you have been all over in the media and have raving fans.
If that is the case, then decide when should you be on PH. Is it when you put up a landing page? Is it when you are trying to get your first 100 users to test your product? Is it when you are looking for a spike in growth after having achieved PMF?
For each of these different circumstances you need to have different levels of preparation in place to gain the most out of your hunt.
In our case we had already been in private alpha since November and had tested the product in and out before getting hunted. The idea was to expand our reach in different territories of the world, now that we knew that there is a demand for the product and had all the in house capacity to handle traffic coming in. We fell in the third category of questions above.
If you want to get hunted just for the sake of it and don’t exactly know what you want to drive, then apart from timing being wrong you are not prepared mentally nor charged emotionally to make the most out of it

2) Who hunts you?: Although you might think that just getting featured by anyone will do the trick, it is not the case according to our observation. Some people are extremely active users of PH and when they hunt a product people take a notice. Follow PH for a month or two before you plan to get hunted. Observe who are the most active hunters, participate in discussions, upvote products you like, show some love because one sided affair seldom works be it in life or on PH 🙂
When we were in Valley we had tweeted to Jack Smith and that sparked a conversation culminating finally into him featuring us. Because it was him, the moment PH sent a mail about the feature people took notice and we started getting a lot of traction.
When you know the person who is an avid user of PH and puts in a lot of products try reaching out to him/her to make sure that you get hunted in the best possible manner. No excuses here. If we can do it, so can you 🙂

3) Day of the week: Another important aspect of timing is which day you choose/ get chosen for getting hunted. Weekends usually see a drop in the traffic on PH and mid week mostly is the best time to get featured. We had asked Jack to kindly decide for us when he thinks would be the best and he was on the spot as we got put up on Wednesday. It was 2:00am in the night in US and morning in India. By the time it was Wednesday morning in US, the word about our hunting spread in India and we were top 5.

4) Spreading the word: You have to be very careful when it comes to asking your friends to upvote. PH has a complex algorithm that tracks the link being shared and if it is consistently being put out with your exact link, then the algorithm will push you down inspite of having higher number of votes.

Having been very actively involved in the ecosystem in India( Via Headstart Network Foundation), when we shared about our hunt people took it in good spirit and started re sharing. To be honest everyone does ask their friends and network to upvote, it is all about how you do it intelligently so that the algorithm doesn’t get a better of you is what matters. We had a fair share of bad luck because when it came to number of votes we were top 4 the whole day but were consistently in top 7 because of the algorithm. Nothing to complain though;).We probably had the best support any one could have asked for with multiple people in the network sharing and talking about us. We are thankful to each and everyone of them 🙂 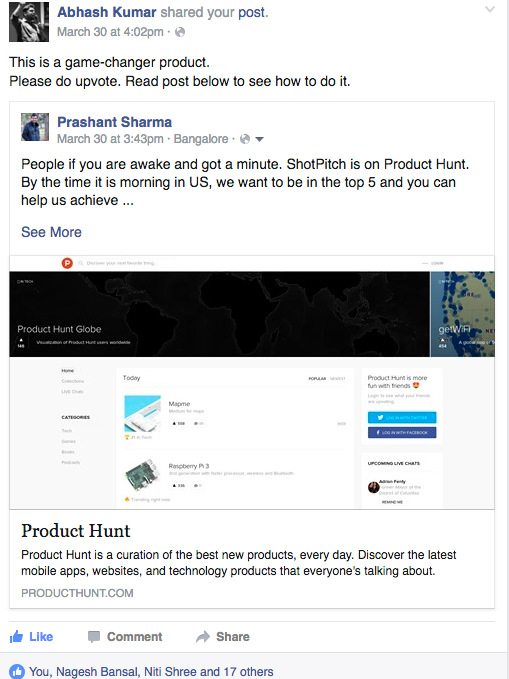 Re sharing plays a very important part when it comes to PH. People have to be willing to do it on their own after you sent a preliminary message. We got picked up by Launch Ticker which is heavily followed and a lot of traffic was driven through Launch. Re sharing is a combination of your credibility as a founder and the value of your product.

6) Be Engaged: While you are featured answer each and every question with jest and honesty. Try not to make up/ build up things to look good. Being engaged and responsive to the comments go a long way in the algorithm pushing you up. Tweet the responses and also the questions. Keep people engaged and be warm in your responses. Here is what we did. We were awake for 18 hours straight after getting hunted making sure that we are responsive to the best of our capability.

Overall it was a dream run for us at ShotPitch on ProductHunt and we are thankful to each and everyone who helped us get there.

PS: The first call we did with an investor who signed up through PH is setting up a 100M fund for India and ShotPitch is playing a major role in channelizing it. There are many-many more wonderful things that we would love to share but I guess the message is to convey that if we can do it, so can you 🙂