User adoption was a challenge which typically slowed down innovation

70% of the fintech ecosystem is dominated by financial lending firms 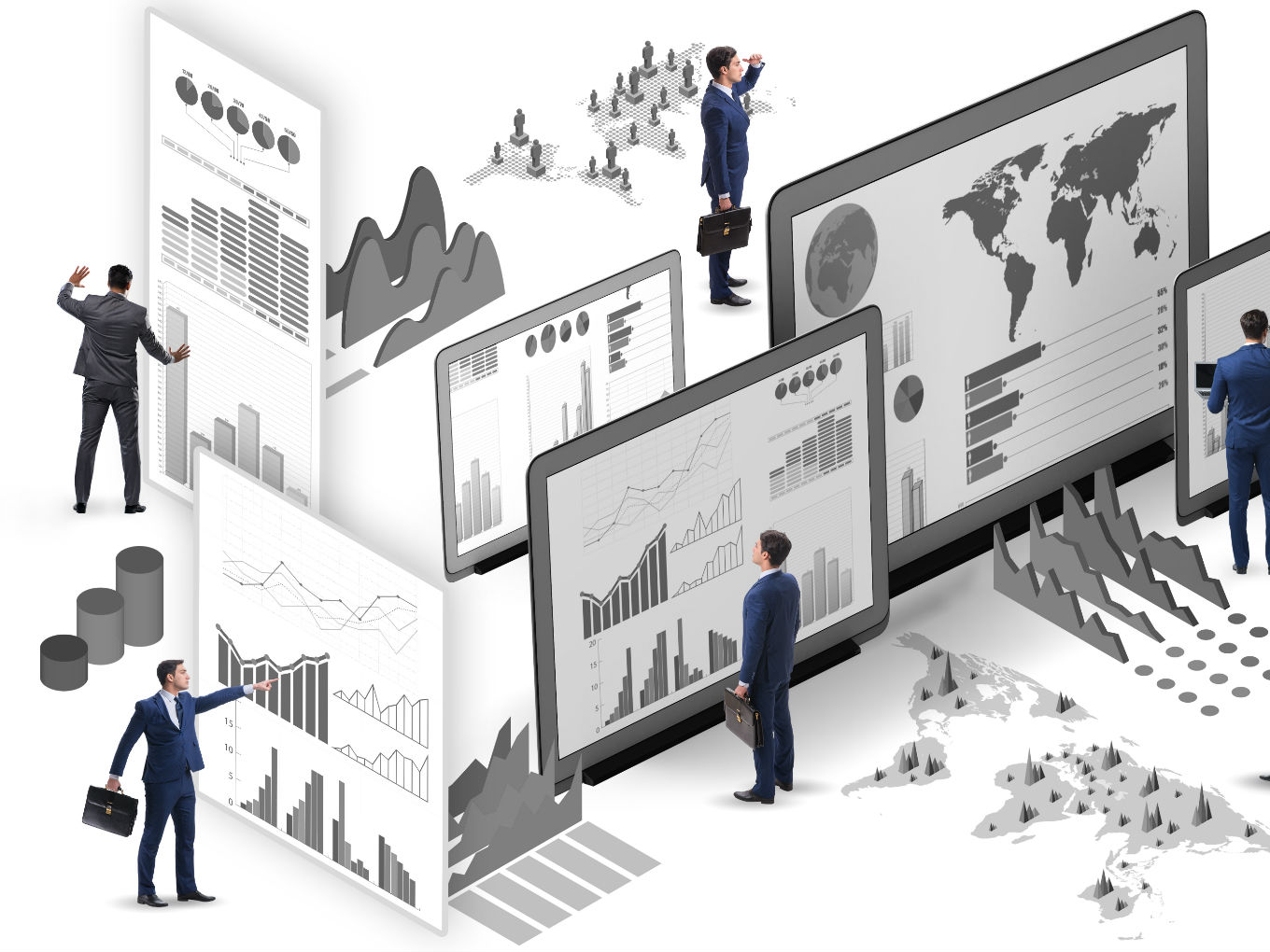 The post demonetisation era finally saw the rise of Indian financial services industry, with an amalgamation of various sectors into one — the fintech.

Today, fintech has expanded to include any technological innovation in — and automation of — the financial sector. This includes advances in financial literacy, advice and education, as well as streamlining of wealth management, lending and borrowing, retail banking, fundraising, money transfers/payments, investment management and more.

Fintech Growth – What Has Led The Way?

Fintech, essentially, is the amalgamation and application of technology in the financial services industry. India has witnessed a dramatic surge of its technological growth and adoption in recent years.

The traditional financial services industry is inherently offline, time-consuming, manual, inaccessible and cost heavy. This is primarily because of the dependency on human capital for every process in the funnel. However, the integration of technology to each step of the process has brought in the change from manual to machine-driven decision making.

The primary drivers of growth for Fintech are:

Technology reduced operational cost: The low-cost measures in delivering financial services to the masses, is primarily driven by the boom of digital adoption and technology. This is evident by the world-class payments initiative UPI, services of which have also been adopted by companies addressing the mass market like WhatsApp, Google, Flipkart and Amazon among many others. The migration from paper to no paper processes has reduced the lead time, efforts and most importantly costs to the financial institutions. On the other hand, it has also increased the accessibility of the services to the consumers even in remote areas, doing away with the need of having a physical establishment.

Regulations turned business-friendly: Innovations in the fintech space, traditionally, were held back by regulatory uncertainties and a conservative approach on the part of the government on such matters. Due to which, the financial institutions had also demonstrated a preference for slow and steady improvements as opposed to disruptive innovations in the past. However, over the last few years, we have seen a paradigm shift in these perspectives. As technologies develop further, they enable significantly more transparency to exist in financial systems, and regulatory authorities can strongly benefit from such developments.

It has been analyzed that user adoption was a challenge which typically slowed down innovation. Governmental efforts towards promoting digitization of financial systems and reducing cash transactions in the economy have been quite effective in shifting consumer focus towards digital alternatives for financial transactions and services. 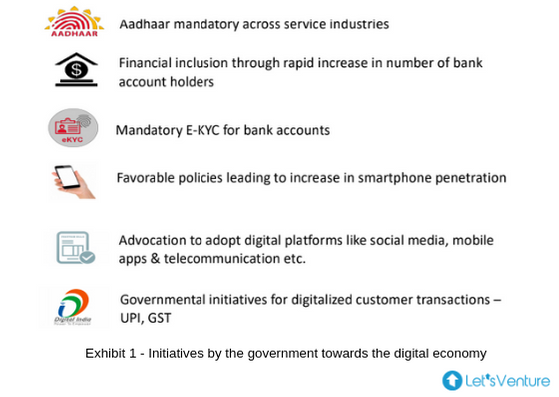 India offers the largest unbanked or underbanked population, along with strong technology and entrepreneurial ecosystem. Exhibit 1 highlights the strong, proactive policy level support from the government to increase financial services inclusion even to consumers in the remote areas.

Initiatives such as Jan Dhan Yojana enabling bank accounts for everyone in rural areas will provide them the access to financial services which was earlier not available. Aadhaar and the emergence of UPI provides a good foundation for fin-tech companies to permeate ‘last mile’ touchpoints and boost financial inclusion across the country.

The scale only matters when serviced with the right infrastructure. Rising levels of internet penetration are growing the addressable market for fin-tech. A progressive regulatory backdrop augmented by government initiatives like India Stack, Startup India Program and National Payments Council of India (NPCI) is encouraging innovation. And due to its sheer size, India is expected to see a massive pool of entrepreneurial interest driven towards fin-tech.

However, such efforts are needed to be guided in the right spirit and an adequately regulated environment to ensure sustainable financial stability and security in the economy.

Challenges in scaling the business:

The relationship between new age fintech companies and traditional financial institutions has now morphed from competition to collaboration. It has been seen that the symbiosis between both categories of players is directed towards creating a unified landscape where each player is benefitting from the strengths of the other, and the benefit of which is ultimately passed on to the consumer.

Further, this enables the incumbents a chance to create stronger, more profitable propositions for customers and have a positive impact on their own top line and bottom line growth.

Fintech firms in India can be broadly categorised into the following segments: 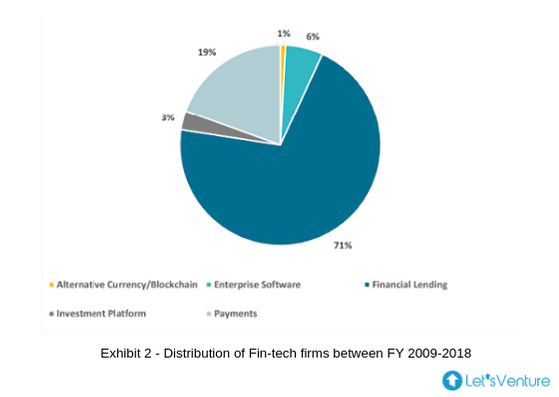 The major highlight is that all of these categories of firms are penetrating into a larger market and addressing the needs of the market which were earlier not serviced by traditional financial institutions. They are able to cater to this challenge by innovating the product and service offerings at different income levels and customize them even at scale.

Different categories of Fintech firms vs. No of deals across funding phases 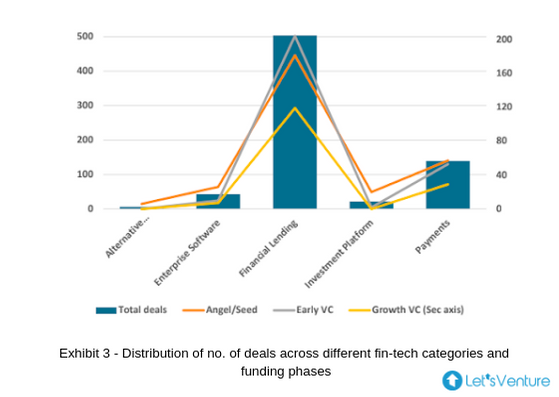 The total amount of funding raised vs No. of deals across different funding phases: 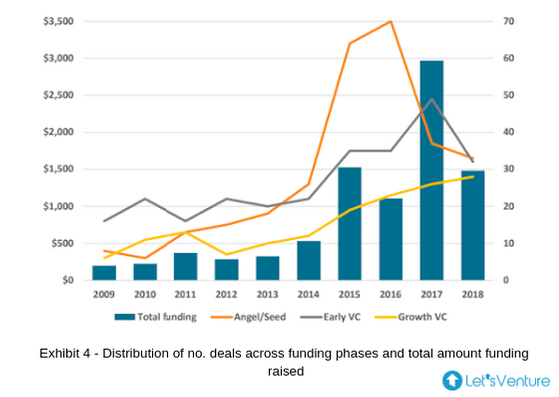 “60% of the Angel/Seed investors have successfully exited, partially or completely, in companies that were able to raise funds from Early VCs or Growth VCs in later rounds”

The average size of funding across different funding phases: 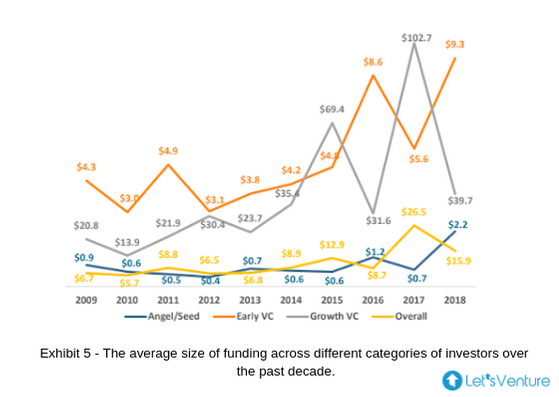 Which Fintech Business Models Are Expected To Evolve In The Next Lustrum?

Rise of New Age Tech: AI, ML, Blockchain, AR and IoT have served significant use cases for fintech growth globally. Blockchain driven banking solutions are successful in the US, UK, Singapore and can see penetration in India. Biometric driven payments due to India Stack can be expected.  AI-driven and ML-driven data points to generate credit and risk profile of customers also have tremendous potential to boom.

Expansion Of Fintech To Different Spheres: It is expected that wealth maximising and management solutions will surge across different spheres. The amount of wealth is compounding at 12-14% in India creating a greater need for people to manage it. Current penetration of institutional players managing wealth is very low at less than 25%. AI chatbot-driven wealth maximisation and management tools will be seen to emerge. Traditional wealth management techniques may be revamped offer personalised solutions to customers.

Robo-Advisors Are On The Way: AI-driven Robo advisors in the financial services are sprouting across the retail investing space globally. Many global web-platforms powered by deep algorithms, viz. Robo advisors, offer financial and investment advice on submitting personal finance details. As India reaches parity with developed economies, a greater number of startups using these technologies will emerge.

New Age Insurance Solutions At Defence: The new age insurance solutions will provide security across various touchpoints. Global Insurance firms are offering customised solutions by leveraging data like tailormade health policies based on customer’s orientation towards remaining fit. Few startups are also exploring the integration of AR to smoothen the consumer experience towards automobiles claims. Few firms also operate on differentiated business models where the total policy amount is pooled centrally and used to pay off claims and the remaining balance determines the next premium amount for all policyholders.

Bringing it all together, the fintech revolution is slowly collaborating all the existing technologies in one complex environment. While digitisation is the beginning of the revolution, it is further leading the millennials to the future comprising smart homes, smart cities, smart contracts, open banking and much more. The adoption of blockchain and cryptocurrency will just add a finishing touch thereby bridging the fintech startups, banks, finance institutions and consumers in one loop. Definitely, the future with fintech is worth looking forward to!