Decoding The Unicorns In The Indian Startup Sector

Decoding The Unicorns In The Indian Startup Sector 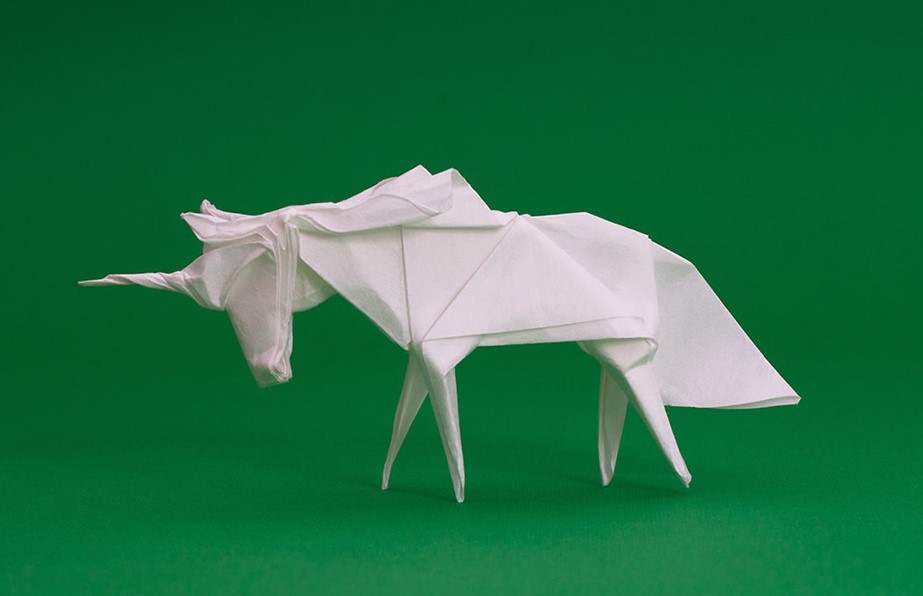 The Indian Startup landscape has boomed massively in the last few years. Spurred on by a more entrepreneurial mindset, we see youngsters (and experienced professionals too!) more keen on starting their own businesses. This trend has some impetus in the form of the overwhelming success of Silicon Valley startups, along with the ease of development of Android and iOS centric applications.

However, sometimes it’s not just the sheer number which astounds the beholder, it’s also the startups which have achieved the much coveted $1 billion milestone. In this article, I shed some light on the Indian unicorns, and the most valued Indian startups as of 2015. I also focus on some key similarities in their strategies, and invoke some examples from Silicon Valley as well.

Easing Into The Basics: Unicorns?

According to ancient fables and legends, unicorns were the most elusive and mystical creatures to walk the land, and their horns – which apparently possessed magical abilities – were sought after by the most powerful people in society.

Today, we don’t have horses with horns on their foreheads. But we do have companies which suddenly emerge as trendsetters within their particular market segment. With an almost infinite potential to grow, these companies attract big investors who seek quick returns on their investment. These companies are called startups. And the ones which are valued at over $1 billion are termed as unicorns.

Talk about the biggest startups in recent times, and you’ll instantly recognize some names as multinational, mega corps which hire the best talents in the industry. We’re talking of the likes of Uber, Xiaomi, Airbnb, Snapchat, Dropbox, Spotify – the list goes on, for a total of 145 companies valued at over $1 billion, actually.

But it’s quite interesting to see the Indian presence in this regard as well. Unsurprisingly, Indian ecommerce giant Flipkart is at the top of the pecking order here, followed by the likes of Ola cabs, Snapdeal, One97 Communications (the group behind PayTM), Zomato, Quikr and Mu Sigma.

The company doesn’t need any introduction, honestly. So we’ll jump straight to the meat of the matter: how much is it worth? 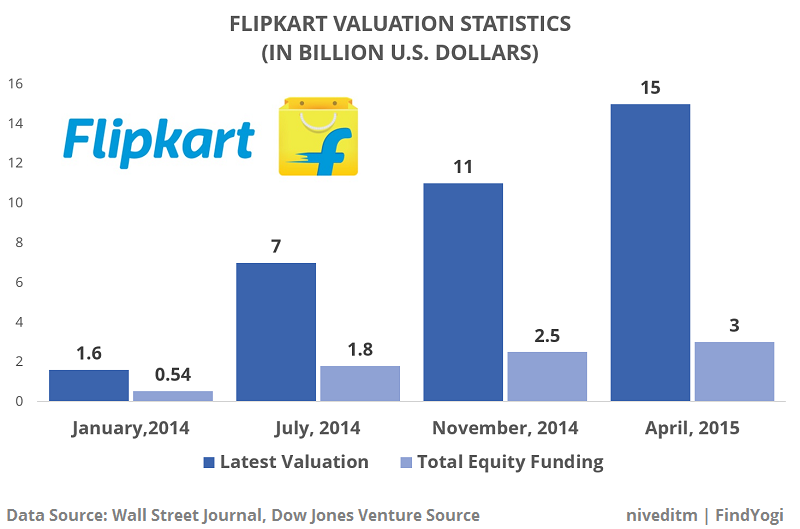 According to the latest valuation by CBInsights, Flipkart is currently valued at $15 Bn. This staggering number puts it at the top of the table of the unicorns over the world, and Flipkart shares the berth with the likes of Uber, Xiaomi and Palantir Technologies, and globally it is the  sixth most valued unicorn startup.

Within Asia, Flipkart comes at a close third, after Xiaomi and Didi Kuaido. And this statistic can be directly correlated with the incorporation of unique marketing strategies such as the Big Billion Day and enabling multiple local sellers to sell their wares online. 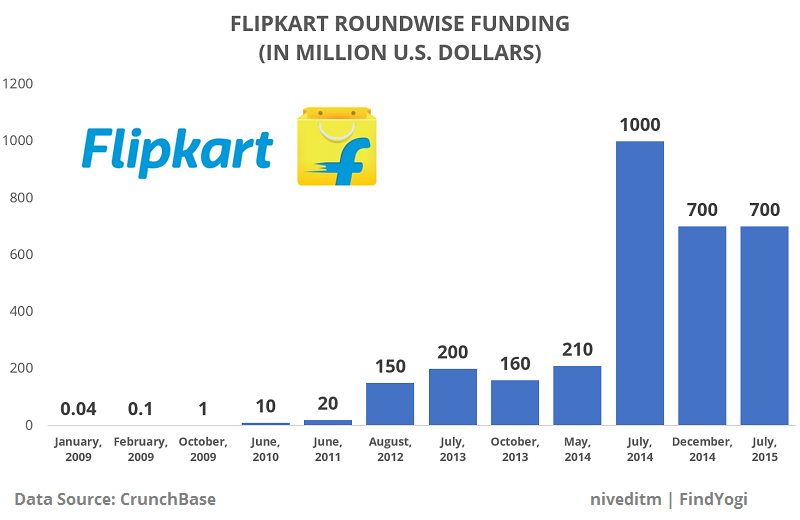 But at the end of the day, all this can be credited to the various rounds of funding by multiple investors. Flipkart has had a total of 12 rounds as of December 2015, and the following graph depicts the amount received in each round.

India’s homegrown taxi cab service has really made its way into being one of the forerunners as far as Indian unicorns are concerned. According to the latest statistics by CBInsights and the Wall Street Journal, Ola is currently valued at $5 billion, and the cumulative funding that it has received is to the tune of $1.18 Bn. 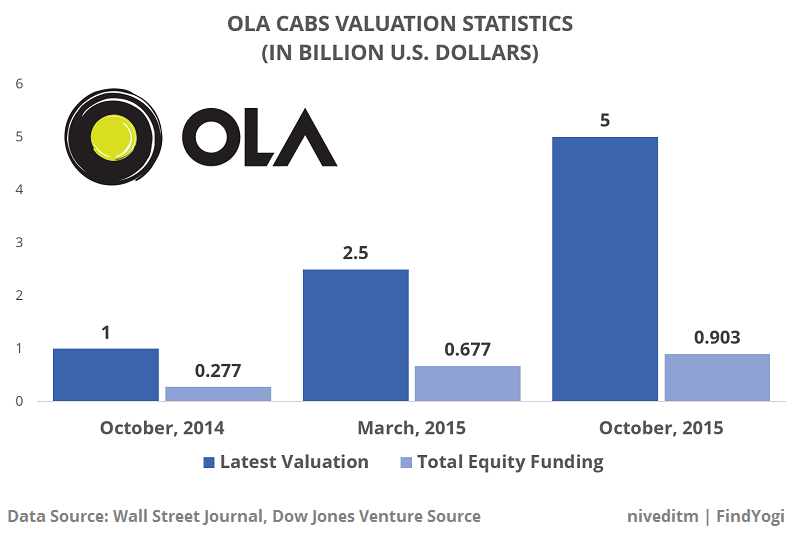 The funding took place over seven rounds, with the latest round taking place on November, 2015. In this round, Ola raked in a sweet $500 million.

India’s original restaurant comparison service provider has now got quite a few competitors, but that doesn’t stop it from making large strides worldwide. With a host of acquisitions under its belt, Zomato is truly expanding over multiple countries. 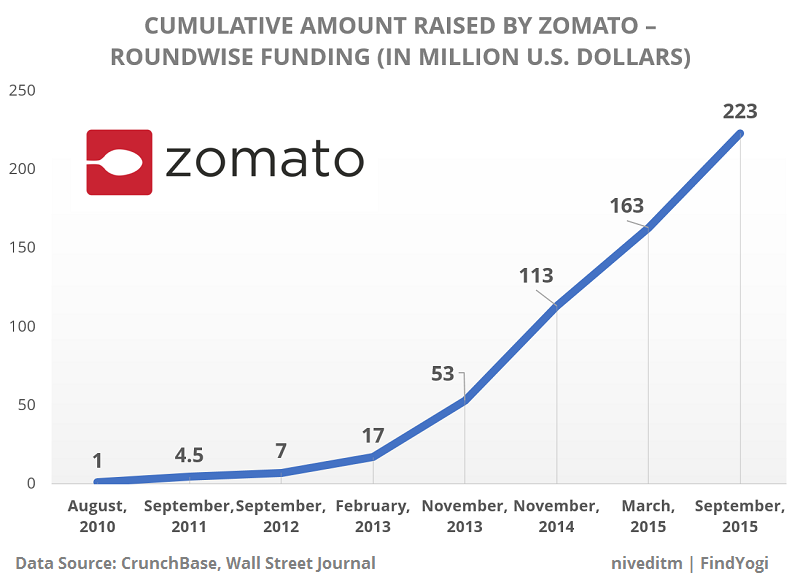 The company is currently valued at $1 Bn, and the total funding is to the tune of $223.8 Mn, with the latest round on September 2015 bringing in $60 Mn for the Gurgaon based startup.

Flipkart’s primary competitor as far as Indian ecommerce platforms are considered, Snapdeal is a startup that is valued at $5 Bn. The company is backed by capitalists and funders such as eBay, the Alibaba group and Ratan Tata. 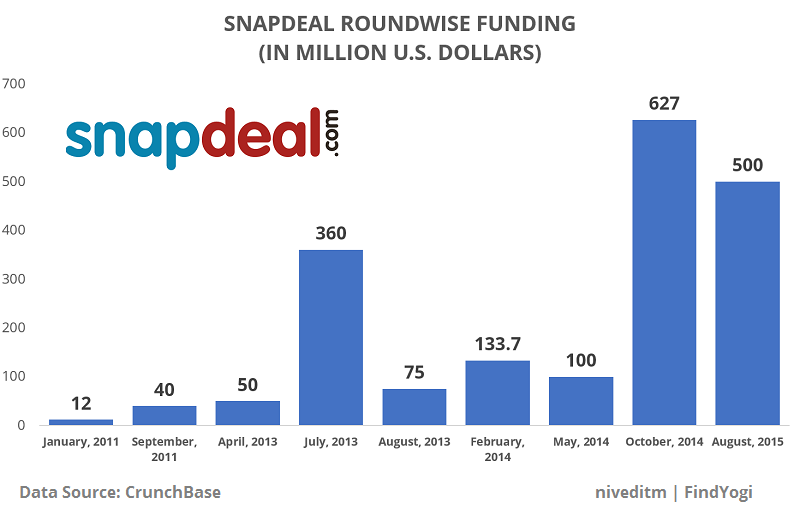 One97 Communications – the company whose brainchild Paytm is riding the popularity wave on the Android market – is currently valued at $1.9 Bn with the total equity funding in March 2015 amounting to $593 Mn. Quikr is another company which is valued at $1 billion, with $350 Mn funding in September 2014.  InMobi is a mobile advertising platform that has a valuation of $2.5 Bn.

Also worthy of note is Housing.com, which raised a total of $139 Mn in its four rounds of funding. The latest round brought the Mumbai based startup $100 million, and there are already three acquisitions by Housing.com in a span of just three years since its inception.

This was a given, actually. More and more people are getting connected to the internet via mobile devices, and this trend originally gave rise to the popularization of application markets. This is in turn encouraging more and more startups to launch applications of their own which will aid consumers and at the same time generate revenue for them.

Startups are showcasing unorthodox environments within their offices, which not only encourage the employees to work more, but also offer incentives and unique workspaces. This is important because young graduates find these cultures interesting, and want to hop aboard the startup train.

Marketing campaigns are of utmost importance for startups in India. To cite a small example, Housing.com has announced that it might actually incur losses soon, owing to the massive marketing campaigns that it has undertaken in the country.

Make no mistake. Startups – and unicorns at that – are not hiring any run of the mill professional. They seek the best talent within the country, from reputed institutions and those possessing traits which would be hailed as assets by the startup.

In an analogous manner, private equity firms, venture capitalists and hedge funds also seek out unicorns which offer the maximum potential for ROI, so it is just as likely that the people working for the unicorns are equipped to deliver.

The city has proven to be the tech entrepreneurial hub of the nation (according to The Times of India), and it is rightly so. India has eight unicorns as of late 2015, and out of them five (Flipkart, Ola, InMobi, Quikr and MuSigma) are based in Bengaluru.

Factors which might influence this observation might include Bengaluru’s tech-first culture, the sheer availability of talented engineers in the city (owing to the number of companies already based there!), the presence of investors and peer startup groups. All these factors make Bengaluru the unicorn haven in India.

Will These Unicorn Crash?

This is an observation that was noticed only recently in Silicon Valley. High valued startups – well over $10 billion – are not getting the results that their investors are hoping for. Notable examples include Snapchat, Square and Fab.com.

The problem with these aged unicorns is that some of them are now struggling to find a sustainable revenue model, which would keep their investors at ease. Risk taking is a part of the game here, but there’s a bottom line – the tech bubble will inevitably burst. And that would happen because of zero liquidity in most investments made by Angel investors.

I don’t believe that this will happen in India, at least for the next couple of years or so. We as a people still believe in the concept of a built up reputation, and the trust factor is of paramount significance in this regard. In fast paced cultures that are Silicon Valley centric, unicorns get boring after a while. But that culture still has some time to turn its gaze towards India.

The need of the hour by the Indian startups is a sustainable revenue model, coupled with a short term thinking strategy on the investors’ part. Aided by the appropriate financial norms and the risk taking factors of investors and entrepreneurs alike, we might avert the bursting of the tech startup bubble, and the extinction of unicorns in India.

[Nivedit Majumdar is startup enthusiast and part of the editorial team at FindYogi.com]