Age Is Nothing But A Number: Corporate VS. Startup

Age Is Nothing But A Number: Corporate VS. Startup 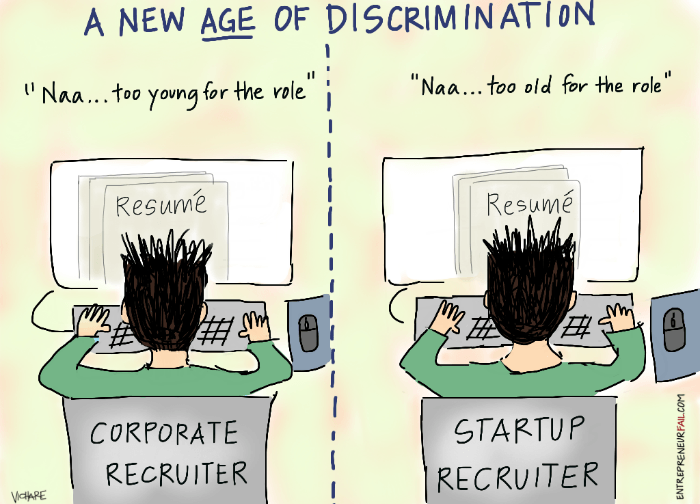 Kriti Vichare
Kriti is a marketer, entrepreneur and cartoonist. She is the illustrator and co-founder of EntrepreneurFail, a comic about the ironies of starting a company. She is also the founder of IdeaKube, a company that facilitates brainstorming and networking through ‘ideation parties.’ Kriti was a former marketer at PepsiCo and Kraft Foods, holds an MBA from NYU Stern, and a BS and MS from Carnegie Mellon University.

The typical laws against age discrimination revolve around older workers.

We live in a day an age where we constantly hear about the millennial founders breaking the bank after jumping into the startup deep end, and we simultaneously hear about the newly appointed corporate CEOs with over 40 years of work experience at a large company.  And naturally there is a bias for anyone who doesn’t fit this mold.

I’ve witnessed both sides of this new era of ageism:

In a corporate role, I met a business partner in-person after one year of a virtual work environment. Although he treated me with respect on the phone for the whole year, when we finally met in person, he said “I had no idea you were so young; you sound much older and authoritative”.  Subsequent phone meetings were much more callous, until he was reminded I was in charge.

In the startup world, I have attended events where someone in their 30s or 40s could feel like an octogenarian. The unmarried, 20-somethings were participating in all night-hackathons, juggling multiple business ventures, saving on rent by living with their parents, all fueled by their Red Bull-infused lives.  Many of the older attendees naturally shied away from this chaotic bunch of youngsters, and vice versa.  And in a recent article, there seems to be evidence that even VCs prefer younger founders, and the reasons include flexibility and frugality.

Of course, the lesson from these stories is that age should not be the reason you don’t get a role that you really want.  By focusing on the skills and attitude required for a role, you can send clear signals that you match the profile.  Eventually, no one remembers your age, just your abilities and impact.  And don’t forget all the role models that have defied conventional wisdom about age.

Have you experienced this new “age” of discrimination? Let us know about it in the comments below.

[Editor’s Note: This comic and post were created by Kriti Vichare for #entrepreneurfail: Startup Success.]