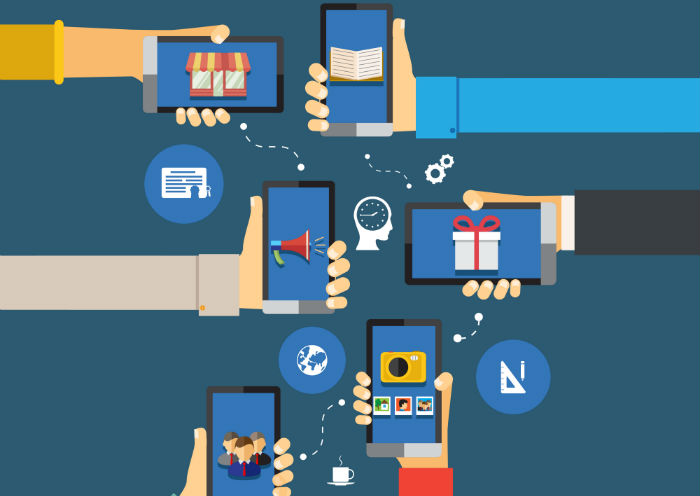 Ajit Singh
Optimist by birth, marketeer by choice. Ajit is a startup enthusiast, essayer, short film maker and writer. He lives at Zepo.

After water, food and air, mobile phones are gradually on the way to becoming next basic necessity for our survival. Can anybody dispute it? I bet your doubts will be cleared if you live without your phone for more than two days. Even Guglielmo Marconi, the guy who got us our mobile phone, wouldn’t have imagined what favour he was doing to the world then!

Speaking about the importance of mobile phones, there are some online retailers who yet don’t realize it. They tend to believe that having a website is all that they need but we at Zepo tend to believe otherwise.

Allow me to make my point with an analogy.

What is the proof that my brand needs a mobile optimized site?

Recently, mobile marketing firm NetElixir did a case study on 53 of its clients who were in retail business. While some of the clients had sites optimized for mobile devices, the rest of them had desktop websites that weren’t mobile-friendly.

After scrutiny of 180 million shopping sessions on these websites the study revealed that the conversion rate on mobile optimized sites was 160% higher than their non-optimized counterparts. Quite evident that the retail stores with mobile site boosted their revenue.

I would rather go on to say that it has changed the way we interact with our daily lives and without a doubt it has also changed our buying behavior. The above survey conducted by NetElixir is just a reflection of how it is happening. And it also tells you how insidiously your business can suffer if you don’t understand its importance. Let’s check this infograph that testifies the emergence of mobile commerce is today’s retail business. 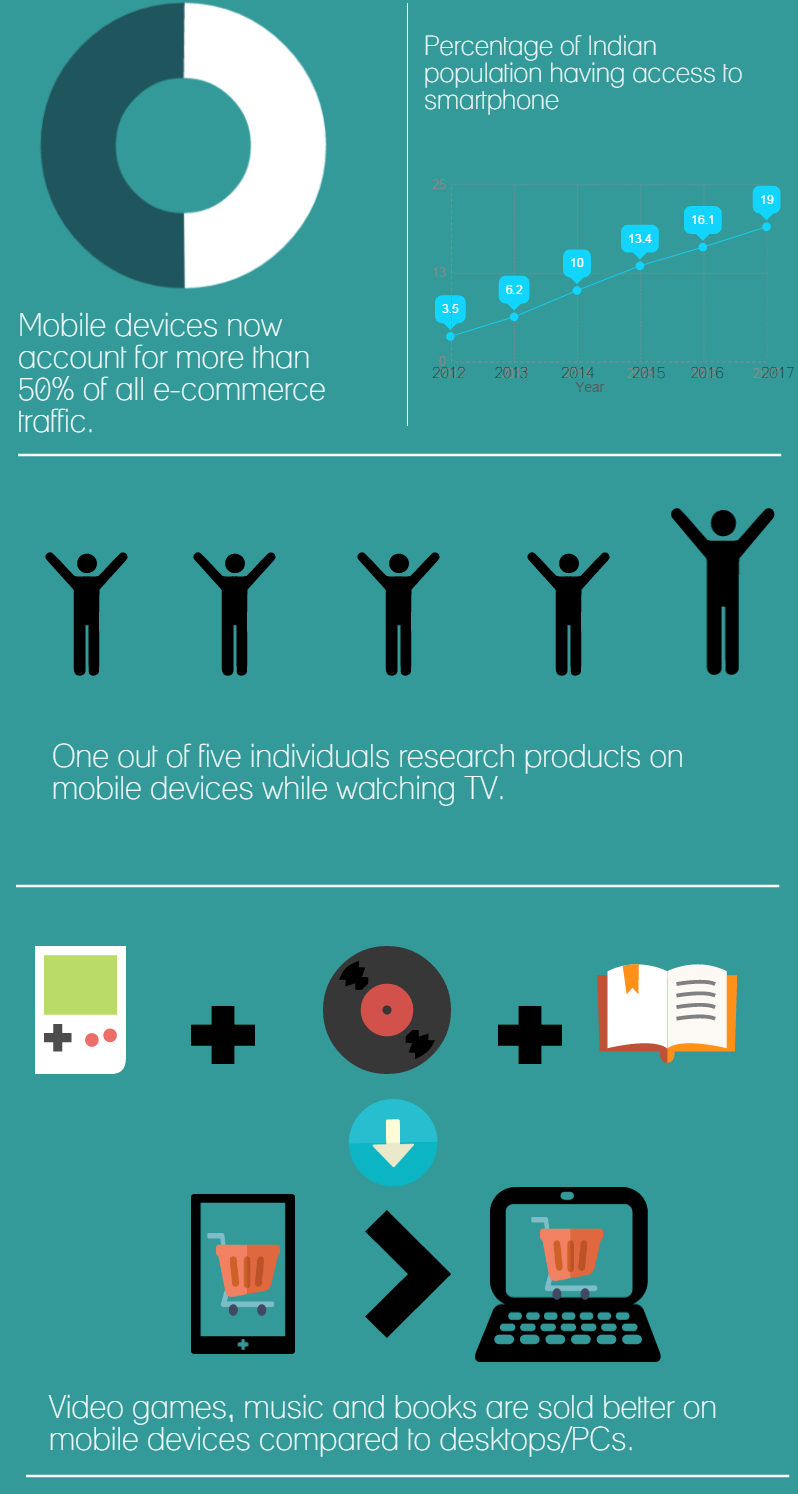 Let’s go Mobile! But what kind of a mobile site do you really need?

Now there is lot of chaos surrounding which type of mobile site is more effective since it is also available in different configurations. For example consider there is a website which you open on your desktop using url xyz.com. When you open the same website on your mobile phone using the same url it is automatically redirected to m.xyz.com, when opened on tablet it is redirected to t.xyz.com. This is a case of mobile optimized site when you offer different versions to your audience for desktop, mobile and tablet. It is also dedicated mobile site.

Very convenient as it seems so far but there is another configuration in which the same url i.e www.xyz.com is used to access the website across all devices be it mobile phone, iPod, tablet or even Google glass if you have it. These are called Responsive Web Designs (RWD) – a very versatile web designing approach in which the website adopts the layout of the user agent. User agent is the device we are using to open the website be it desktop, smartphone or tablet.

Now, there was lot of debate on which is better- separate mobile site or a responsive website, on developers forums, blogospheres and more. And this went on until Google made its penchant for RWD public on its blog channel thereby eliminating any sort of possible dispute among webmasters and digital marketers. I am pasting the snap of that annonucement below.

5 Reasons Why Mobile Responsive Is the Way to Go!

Now after being convinced about the impact of mobile devices in our buying behavior and why responsive design is best choice, hands down, let us ponder over the reasons why you need a mobile site for your store.

You don’t want to block your customers from reaching you!

I am sure as shooting that your audience would not be found slogging on their PC at this time of the week. On weekends it is not your target audience’s PC but their mobile phone or tablet or iPod which would stay with them, and that would connect them to your store. And if your website is not mobile optimized then you are apparently blocking your customers from reaching you which might translate into shift in their interest to stores who are mobile optimized.

Because you should take advantage of being an online store owner

Back in 2012, it was reported in TSMH, that Australian retailers have started charging shoppers to try on shoes and apparels. They took this seemingly outrageous step in a bid to counter ‘Showrooming’, something that has dreaded the retail industry.

What is ‘Showrooming’? Online store often offer products at prices lower than their bricks and mortar counterparts. So the consumers visit bricks and mortar stores to examine the product they want to buy, thereby feeding their desire to physically inspect the product, and then they go online and buy it. This practice is called “Showrooming”. It has become so prevalent that the word ‘showrooming’ was formally included in Oxford dictionary in 2013.

One man’s gain is another man’s loss. So, if bricks and mortar stores are losing business because of showrooming, online stores are gaining from it. It’s just that your online store seems not to be one of them because you don’t have a mobile optimized site.

Because commander-in-chief of Internet, Google, wants you  to have a mobile site. Beat that.

This might be one of the most provocative reasons for you to have a mobile site- you need a mobile optimized site because Google might not appreciate if you don’t have one.

The aim of the Google is to provide best search results to its users, not only on desktop but across every device. Now if your website is not mobile compatible then Google would recognize it and might not display it in the search results on mobile devices. And it is quite rational on its part to do so because if it does, it would lead to unsatisfactory consumer experience which is last thing anybody wants including Google. So yes, you should have a mobile site because google wants you to have one.

Consumers like to buy through their PC obviously because the bigger screens make shopping easier- an advantage PCs have over mobile devices. For example if you are buying apparels online there are several colours, sizes, fabrics that you would like to check and view on big screen which is nearly impossible on a mobile phone. Same is applicable when you are buying antiquities. furnishing items or appliances, in different contexts but there are some categories where the choices are too limited to care and you don’t need to visually inspect the product as in previous cases. The Experian’s “The 2014 digital marketer: Benchmark and Trend Report” states there are categories which are doing better on mobile devices than compared to desktop. And they are books, music and video games. As a matter of fact these products showed a remarkable rise in sale through mobile devices which exceeded their sale through desktop.

Last but not the least, you need a mobile optimized site because your customers want it period. Your customers don’t want to view your desktop optimized website on their mobile device. Because first it doesn’t look good, it looks cluttered, it makes their browsing difficult and above everything else it miffs your customers, which is supposedly the last thing any seller wants. If they are getting miffed using your site than there is no question of making a purchase. Consider a situation when you are addressing Marathi crowd and out of the blue you crack a joke in Bengali. Can you expect your audience to laugh? Ofcourse not. Your Marathi crowd needs a Marathi joke just as your mobile user needs a mobile optimized  site. You ought to give what your audience demands, forcefully thrusting your choice on them cannot get you results.

So, the answer to the question whether your business needs a mobile site or not, is yes. If you don’t have a mobile site then you would lose business and chances are you are already be losing it without even realizing.

So put ‘creating a mobile site’ on the top of priority list today and happy selling.