India has seen a huge surge in Internet usage over last 12 months and it is clearly reflected in the 3G Data being consumed across Telcos. I did a quick analysis of the 3G data usage pattern for two leading Telcos and the consumption has increased 2X since last year.

My assumption is that the trend will be similar with other Telcos too.
It will be interesting to see the above graph four quarters from now when Reliance Jio spreads its wings fully.

I anticipate overall data consumption to grow 4X in next 1 year.

Surprisingly, India saw some decline in smartphone shipments in the last three quarters, as compared to the previous period. However, this was still good enough to take India’s smartphone tally close to 200 Mn. As a result, the downloads on Play Store grew by almost 90%

While looking at the above data, I decided to analyse some behavioural trends on the Play Store. The last one year has seen many new Chinese apps ruling the Indian charts which surprisingly include several news & content apps too in addition to Utility Apps which had always been their stronghold.

Indian Apps seems to have lost some position to Chinese Apps in the last 1 year. One very surprising fact from the graph below is how games as a category has lost out to utilities.

Games have always been very popular with old and new smartphone users, so I was intrigued to see this trend. I don’t have definitive answers, but here are some high-level hypothesis:

Aggressive marketing by utility apps from across the border may have stolen the limited disk space on low-end phones.

Reduced marketing by global games: India, till 2014–15, was considered as the cheapest source of app installs which is no longer the case in 2016, thanks to 2/3x rise in CPCs/CPIs owing to large spends on FB/Google by Indian Apps.

However, there was one very big positive around gaming. The chart below shows how games now dominate “Top Grossing Apps” and games share has increased by 20% on an already higher base.

Dating apps have gained in the last one year in addition to the games.

Continuing with “Top Grossing” analysis. one very striking data point is the single digit share of Made in India Apps. These Indian Apps consists of Teen Patti & some popular Music streaming Apps.

Not even a single Indian “Casual” game made the list. Are we still not developing quality games? 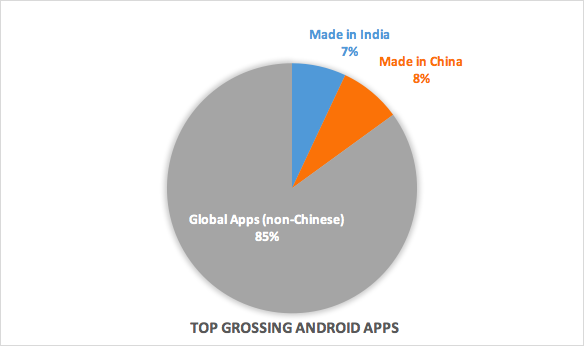 Google recently made a slew of product announcements, including enhanced Wifi rollout, Youtube Offline, Data Saver for Chrome, 2G Compatibility for Play Store & liter version of their Apps for India. This is part of their next billion initiative and they expect to add millions of new Internet users from India as a result of these initiatives.

This will also bring many feature phones online giving rise to Mweb traffic. Mweb is already 4X of App’s traffic and it may maintain its lead. Do you have a Mweb product strategy in place?

[This post by Deepak Abbot first appeared on GrowthBug and has been reproduced with permission.]